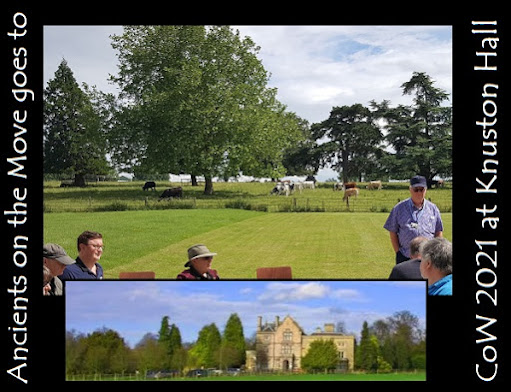 (meeting outdoors and empty chairs ... posterity will know this was 2021)

WD's 2021 Conference of Wargamers, Knuston Hall, was able to take place with a reduced capacity and with Social Distancing required - which was initially very weird.  Fortunately, the weather was mostly good over the weekend, which enabled a number of outdoor sessions and masks to come off.

This will be a relatively short report, as there were only a small number of ancient and medieval games at CoW this year  - if there was a theme, it was Cold War/Terrorism and/or Cluedo respun.  But I ended up spending a lot of my weekend in the 18th Century (an unexpected collection of excellent games, from pirates to night attacks and set piece battles) ... 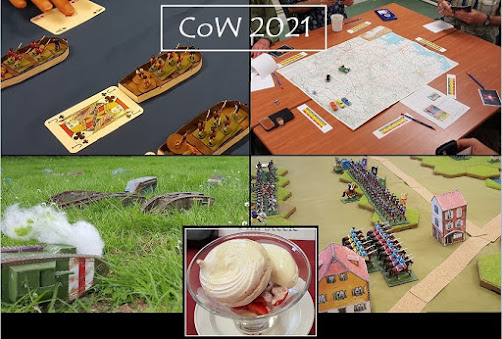 (the variety of CoW 2021 ... 18th century attacks, terrorist cluedo, tanks on the lawn and all fuelled by a kitchen excelling itself ... ) ...
If you want to see more of the other stuff, there are pictures on my companion blogs
18th Century on Phil's FoG Blog
20th Century on Yesthatphil's P.B.EyeCandy
I'm afraid I missed out on the intro session to Never Mind the Billhooks, but I got in a late night game of Trebian's latest publication, Dicing With Death ... an alternative for Gladiator fans who don't like cards or dominoes. 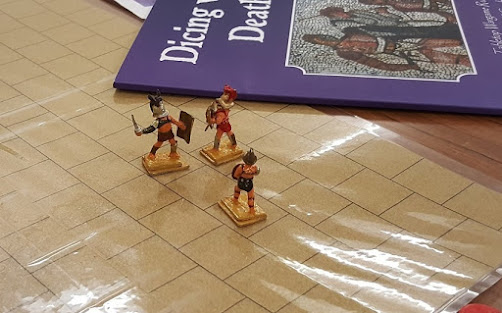 (a multiple combat: Dicing with Death)
We had a fun little session and it seemed to work OK even with three players (which was never really possible with Gladiolus - historically so, Andy would always have said, but nonetheless, players often want to do it) ...
We also played a learning game of 300, a board game of the Persian Invasions. I liked it - I won (GGIW).  Actually we were told that the Persiand had not actually won in any of the presenter's series of games, although the reputation is that there is a fine and fair balance. 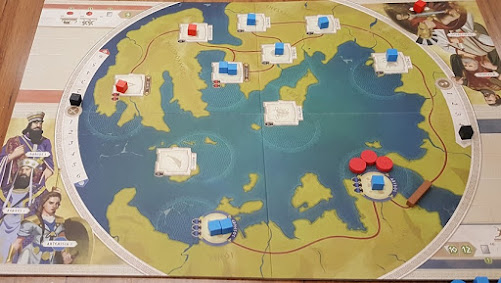 (the last turn: the play completed, but the scoring still show the score before the tally-up: +1 still, to the Greeks)
... so I was happy to take the Persians and give them ago.  Indeed the odds  did seem stacked in favour of the Greeks.  Nevertheless, I managed to get through to the end without losing a King and with a good hand (and a strategy) for the last turn.
I took Athens, and, courtesy of a very useful card, managed to hang on to it and the rest of my conquests (+6 to the Persians, in the nick of time) 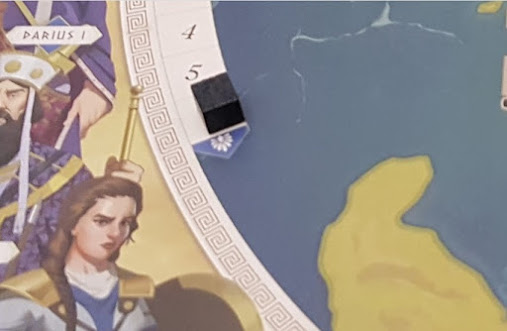 Not at all ancients, but I'm sure some regular readers will be interested in the pirates game, which was designed and put on by Sue Barker, and in which Phil Barker commanded the treasure ships while I and a couple of other pirates tried to engage them and steal their bags of treasure. 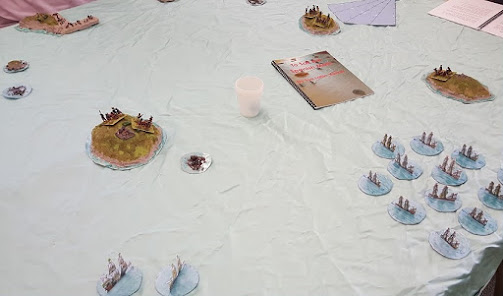 (To Sail the Spanish Main by Sue Laflin Barker)
Phil, of course, is getting on a bit, these days, but commanded the ships very well (and unsportingly sank most  of my pirates), getting most of his ships into port. I haven't seen Phil since before Covid, of course, so it was nice to see him well enjoying the games.
The ships Sue was using were those cut out Spanish Armada ones from Helion. 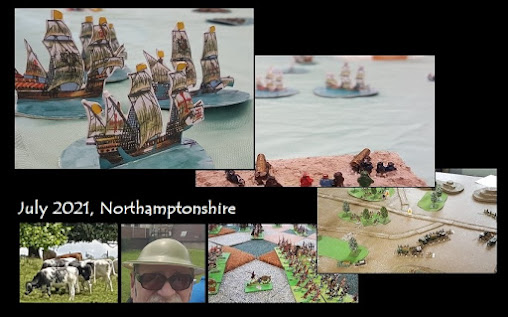 (Cows, silly hats, SYW flats, Treb's SCW and those paper galleons: more from Cow 2021)
I played 9 games from Friday dinner to Sunday tea ... not bad at all.
I also put on a few pounds. 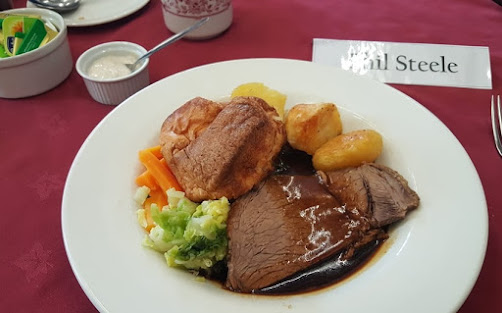