SELWG 2009Whilst I was at Portsmouth representing the Society in the English DBA Open Tournament, the 'A' Team was at Crystal Palace doing a Society display at SELWG. The main feature was a reconstruction of the battle of Magnesia from the Lost Battles stable. Daivid Barnsdale kindly sent me some photographs to share. 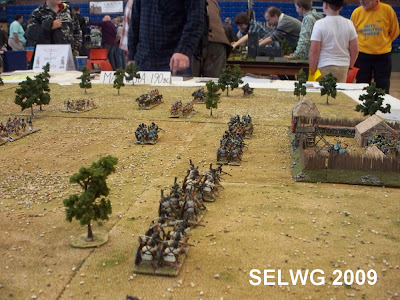 Reports from the show have been very favourable, and I understand lots of visitors called by and left with Society goodies of one kind or another ... 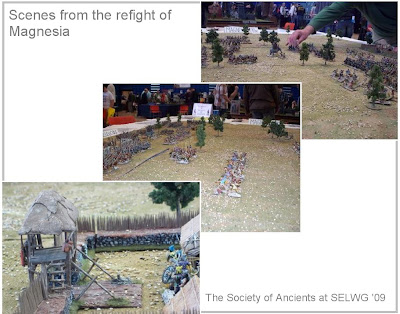 Meanwhile, the Magnesia game was fought to a conclusion twice during the day, closely contested, but resulting in Roman wins ... 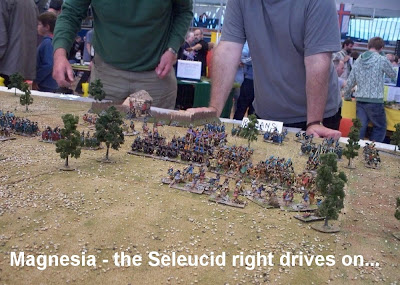 It was a pity SELWG and the Open clashed ... the Crystal Palace event has been missing from the calendar for a couple of years due to refurbishments, and has made a welcome return. Maybe next year.

More chances to see us during November ... Fiasco in Leeds at the start of the month, Warfare in Reading, Rivermead, three weeks later ... Casual browsers should note that we are fast running low on 2009 Slingshots so if you still want to join for this year you should not delay. 2010 subs can be taken/renewed on the website, and we have attractive rates at shows for a 2009/2010 combined option if you collect this year's back numbers when you sign up ...

And, of course, a warm welcome to all those new members. Don't forget to drop by at one of the shows and have a chat.

Phil Steele
Posted by SoA Shows North at 11:02 AM 1 comment: 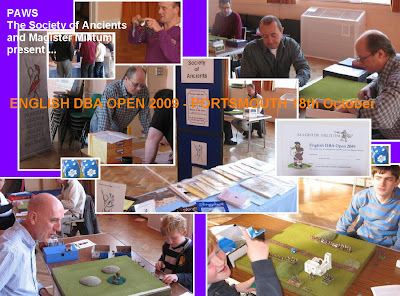 Mid October and Portsmouth beckons - host of the annual 'English DBA Open' sponsored by the Society of Ancients and Magister Militum. Thanks to the PAWS club for running it and to MMs for adding in a nice DBA army prize.

Last year I managed to get down early enough to play, and had an enjoyable outing with my (formerly DBM) Axumite army. It worked very well, but I thought I ought to vary the mix (it is DBA after all) ... so in the end I decided to play around with the African theme and go for Christian Nubian .. which loses an Elephant general and gains some camels. Still a nice mix, I thought (and after last year I remain persuaded of the merits of Warband in DBA ...)...

(Phil's opponents in the 'Ancients' pool)

My basic premise that no-one else would take a Christian Nubian was wrong (sorry Duncan - I very nearly took Later Pre-Islamic Arab ... perhaps we should collude next time ...)... I fought one in my second game. My impression was this year there was a bit more infantry around ... but a good mix of army types none the less. I fought against Chinese, Bospran, Palmyran and Egyptians as well as the other Christian Nubian. The army is Aggression 1, and aside from the civil war, attacked twice and defended twice. 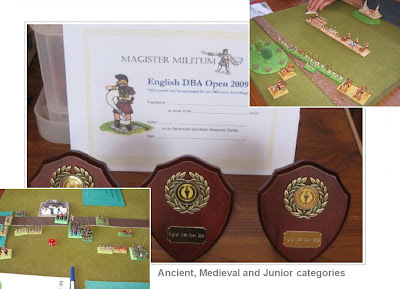 We played off in two pools, Medieval and Ancient, with the pool winners plus next two highest scoring players going into a semi final (and the two highest scoring Juniors going into a Junior final also) ... Courtesy of a very generous Richard Pulley (whose Palmyrans forgot to put their armour on), I very nearly made it to the semis ... (and Richard faded out of them). Aside from that rather dicey game (in which Richard played well enough to leave me no chances other than lucky longshots with bowmen ... I need say no more, as four of those will win a game!) ... all were close and challenging. My game against Robert Dowling in particular saw me kill his general early on, but not get ahead on elements till taking his, six against my five. Now that is close. 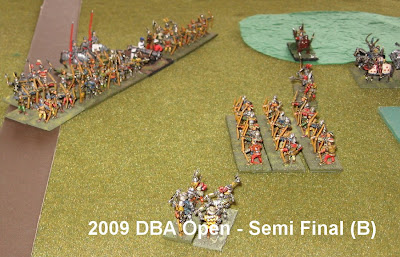 The semis and final were played with a matched pair provided by the organisers. In this case, Wars of the Roses with all options (and the players could pick their preferred variant before the matches started). Refreshingly, all four armies ended up different (and hopefully the players will contribute their reflections on the choices they made to a report for a future issue of Slingshot).. 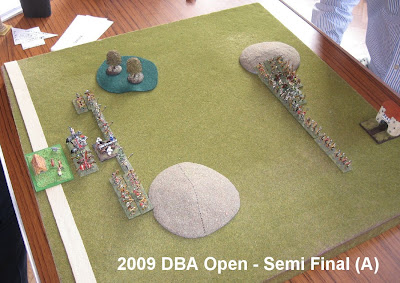 Perhaps as a result of so many Bowmen on the tables, both games seemed quite tight and 'cagey', but Martin Myers and Colin O'Shea won through to the final. 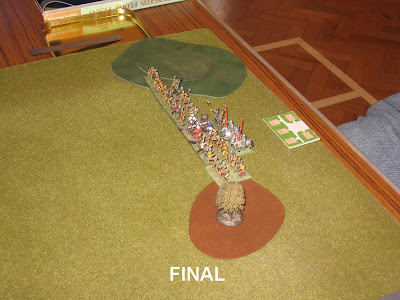 So another bash with their WotR armies, and another tight game. Actually quite a long game which, had I had to call it, I'd have got wrong. In the end I think some rather risky attacks paid off, and Colin's army won the day. That said, it was a close game and both players would have made worthy champions. Great day out and a good mix of waving the Society banner with some simple no-nonsense DBA games. Pity about the roadworks on the A3 on the way home, of course .... 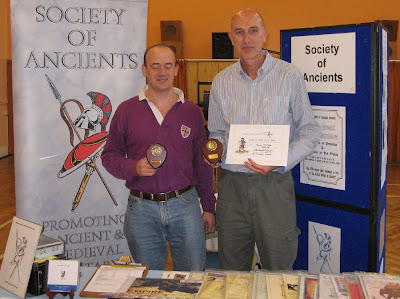 We were a little down on numbers this year - perhaps not least because there was another event on the other side of the M25 ... the return of SELWG ... The other SoA events team was at that one ... (I hope to get some feedback for you ...) ...

Full results, hopefully more pictures etc. should come up in due course - watch the PAWS page
http://uk.geocities.com/paws_sec/2009_English_DBA_Open.htm
and a write up is promised for a future Slingshot.
Posted by SoA Shows North at 10:50 AM 1 comment: 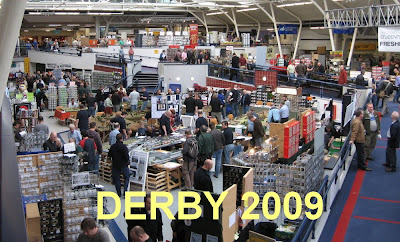 Many thanks to the Derby organisers for their good offices. We were in one of the further corners last year, and a little short - especially on the Sunday - of the passing traffic necessary to make participation games work. This year Graham offered to reprise the 'double game' offer of The Great Commanders which we ran at Milton Keynes earlier in the year ... but on the proviso that we had a more suitable pitch.

OK - so the layout of Derby University's Kedleston campus Atrium meant it wasn't quite as easy to get round the stand as we'd have liked ... but we asked for footfall and we got it. It was really only be Sunday afternoon that the games had some idle moments (otherwise, more often than not, both were in continual use and attracting spectators, too) 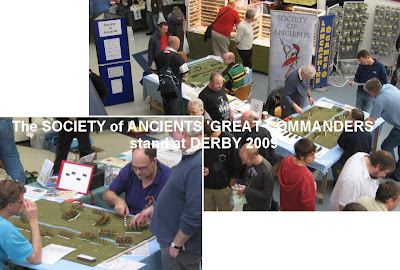 So, Alexander at the Granicus or Hannibal at the Trebia , played with Ancient and Medieval Wargaming (AMW) - I've explained the basic idea here before. The project attempts to introduce people to historical wargaming in the ancient period: Neil Thomas's game is one which, although it has a fair degree of variety and subtlety, has basics which can be picked up pretty reliably during the course of the first game. The rules are in a book which is aimed at the general reader and which is available from mainstream bookshops. Stylish though they are, Graham's presentations feature simply painted 20mm plastics (mostly HaT) .. also available in many High Streets (if you have something passing for a hobby shop) ... So, an introductory game that's quick to pick up and is good with youngsters and newcomers, which you can buy in normal shops and is shown played with equally 'non-specialist' figures in a package where a few boxes of plastics will do you a very plausible Great Battle for a minimal investment. Excellent. 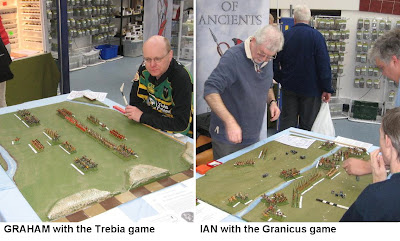 (click on the pictures to get a bigger image)
The results were a bit of a swing from the Milton Keynes outing. Without Will bringing his uncompromising determination to the Roman cause, Hannibal reasserted his customary control over the Trebia scenario. Alexander, however, was no longer just walking over the Persians at the Granicus. Whereas in the MK version, the somewhat flimsy cavalry force was backed by a unit of hoplites and a unit of foot skirmishers, in the Derby line up, both units were hoplites. Facing a Macedonian phalanx, this really did seem to bolster up the Persians ... meaning attempts to overwhelm the enemy flanks did not automatically entail allowing the Phalanx to walk off the board in the centre (which is fatal in AMW). 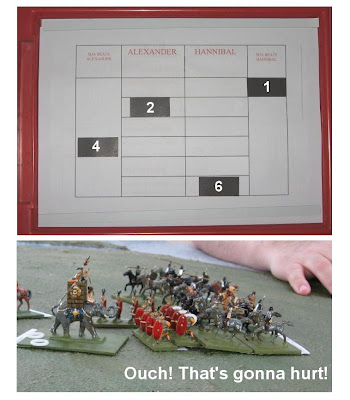 Well, the results speak for themselves ... The (experienced) SoA presenter team beat Alexander 4-2 at Granicus, but lost 6-1 to Hannibal (and his elephant, if that isn't giving the game away ...)..

I think 13 games isn't bad going for a participation game at a show that is a real battle - one or two of them 'two handers' . 8 visitor/Great Commander wins against our own SoA Romano-Persian opposition shows we mostly let them win! 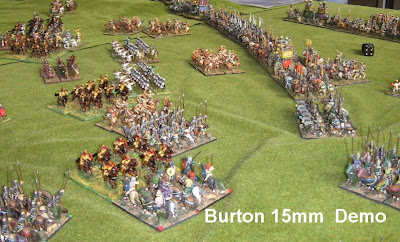 With the games popular and busy, I only got a cursory go around the rest of the show. There were quite a few ancient and medieval games around ... a good looking FoG demo by the Burton lads ans another chance to see the 1st Corps demo game of Magnesia which I included in the entry for The Other Partizan a couple of weeks back. 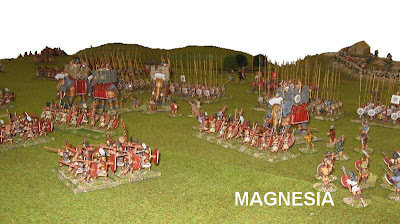 (good looking 28mm figures)
Now I don't feature 28mm ancients here much (well, aside from Eric's collection which regularly fills out the requirements of the Lost Battle series of Society presentations) ... but the 1st Corps ones are quite nicely proportioned and I do like the Magnesia set up. 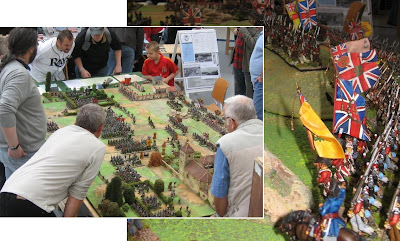 (more good looking 28s!)
I quite like these Peninsula Napoleonics as well. Again, no fan of the sprawling Nappy 'static' games we see so often, this time the big one was a Borodino in 6mm (the kind of scale you might well actually use for refighting Borodino! ) and the compact and densely filled Peninsula game wasn't too overblown and looked great (the sort of Divisional scaled game you might actually play in 28mm ...)... An uncharacteristic thumbs up from me.

The Leeds club very big 'Raid on St Nazaire' which I had to go up to the balcony level to get a good look at (get it all into the camera frame). I wonder how it worked.

Maybe it'll be at their home show, Fiasco, at the end of the month.

Thanks to everyone at this one - enjoyed it as usual ... (similar slot next year maybe?)

SELWG on 18th, English DBA Open (in Portsmouth) also on the 18th, Fiasco on Nov. 1st

Come and see as at a show.
Posted by SoA Shows North at 12:01 AM No comments: