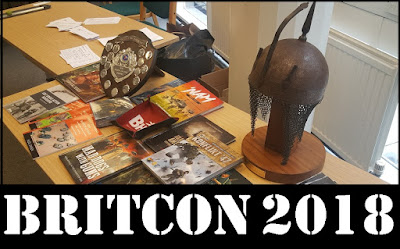 Which brings us almost up to date ... August saw Britcon again ...

For me these days no longer the exhausting long weekend of DBM, Armati or FoG but a quick-fire day of DBA.  Saturday only ... five games. 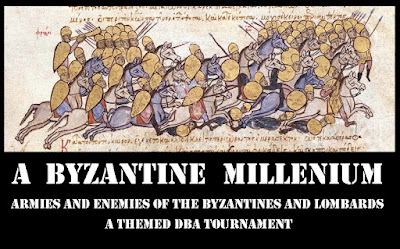 Britcon is generally a themed competition and this year Simon was moved by the one thousandth anniversary of the battle of Cannae (the later one between the Byzantines and Lombards) and offered a list of Armies and enemies of 1018. 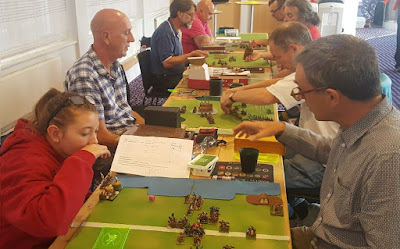 This actually fitted quite well with my tidying up programme as I have been working my way through an old Byzantine (generic) collection and it would be a useful spur to the process.  I got the new (8Bw) infantry finished and completed the army with Anatolian cavalry etc. and the previously refurbished camp.  It is all coming together ... 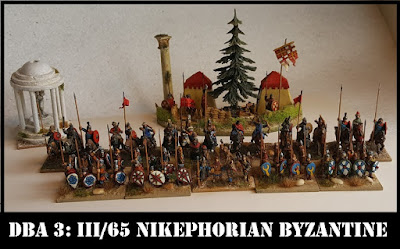 Now I said 5 games ... well in this case not for me ... like thousands of others that Saturday morning I fell victim to roadworks and sat on the M6 for 2 hours missing games 1 and 2.  They are building a smart motorway by means of running a thoroughly dumb one.

Fortunately the Umpire was able to stand in for those 2 games so no byes ensued and I was able to take my place for the afternoon session.  I got to play against East Franks, Early Muslim North African and Early Bulgar ... 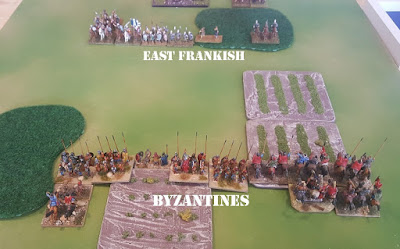 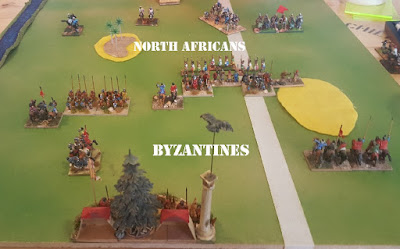 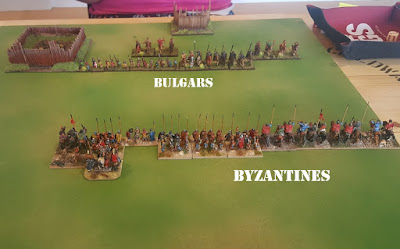 I achieved a timed-out draw and 2 wins ... and a 4th equal finish.   Not bad for the only Byzantine in a Frank fight!  Of course I had set out to shoot my way to victory and the results were predictably random.  Against the Franks I couldn't hit anything.  Against the North Africans I probably had the right army ...

... and against the Bulgars I hit everything.  I think my averages were about on par but the 6s came all at the end against the benighted Bulgars. 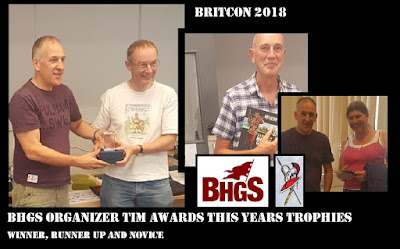 Aggression 4, I attacked in all games.

It was the last day of the heat wave and it rained stair rods in the evening.   Yeah, yeah ... I know ... it rained in Manchester (big news story ... !) and I bashed my car in the car park. Eventful day.

Hoping to do it all again next year.  Partizan in a week! 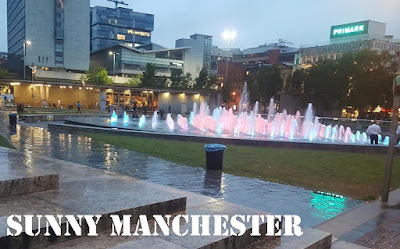 Posted by SoA Shows North at 3:28 AM No comments: Links to this post 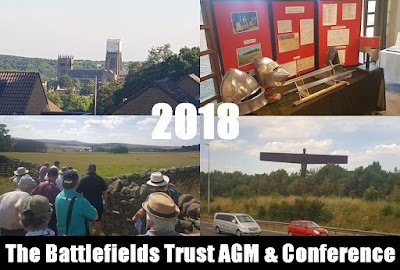 Based at Durham University, the 2018 BFT annual conference event featured a talk by Michael Jones on the Black Prince (see his new book) as well as a visit to the site of the battle of Otterburn in Redesdale ... 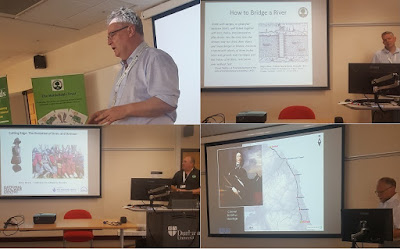 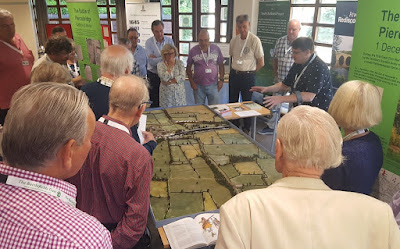 Another feature was the presentation of battlefield models ... in this case Mark Hornsby's stunning 6mm reconstruction of the ECW actions around Piercebridge. 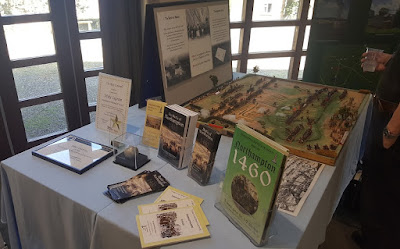 I had taken along the Northampton Battlefields stand and the Naseby model ...

But we ventured even further North to within sight of Scotland for the trip to Otterburn. 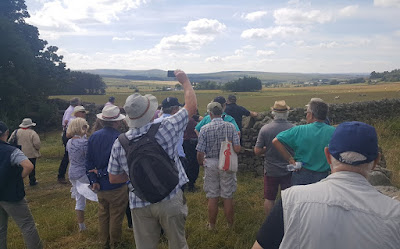 The Battle of Otterburn was fought in 1388 between Henry Percy (the famous 'Harry Hotspur') and James Earl Douglas ... DBA enthusiasts will enjoy the fact that the Scottish camp played an important part in the battle (indeed the English raid on the Scottish baggage was the key that drew the belligerents in) ... 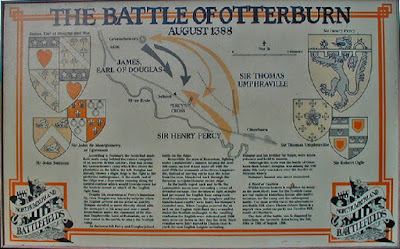 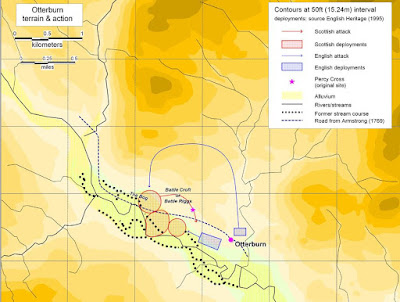 This is definitely worth reconstructing in miniature.

Follow the link above to the Battlefields Trust resource centre for more of what we know and can suppose ... 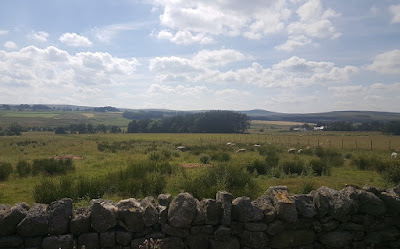 (the Battle of Otterburn: possible site of (part of) the Scottish camp ... )

The Conference was mostly 17th century in content, but on the way home a took a trip round the beautiful remains of Barnard Castle overlooking the River Tees ... 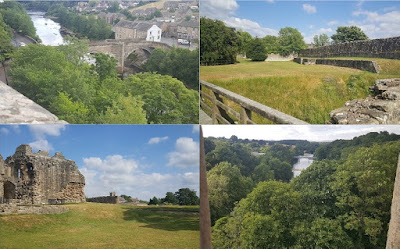 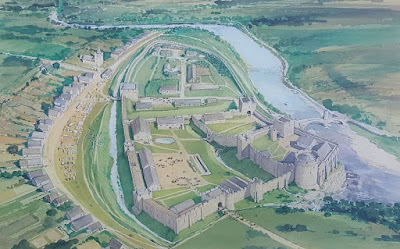 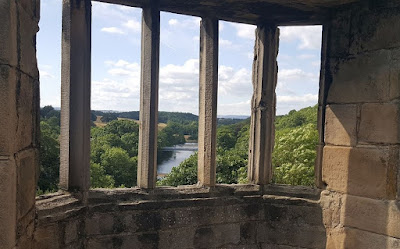 (overlooking the Tees: Barnard Castle - the Richard III window)
Posted by SoA Shows North at 1:23 AM No comments: Links to this post 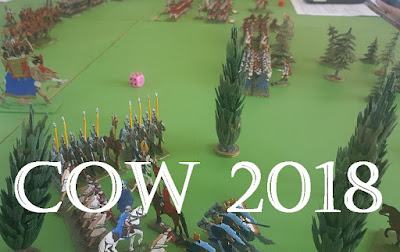 The 2018 Conference of Wargamers

Midst the 2018 heatwave it was off to Knuston for WD's annual residential event.

Ancient and Medieval content was a little sparse this year but we started off with an '8 years on' visit to nearby Northampton battlefield.   WDers had walked the battlefield on the 550th anniversary back in 2010 - which is pretty much what kicked off the Northampton Battlefield Society (of which I have subsequently become vice-Chair) ... 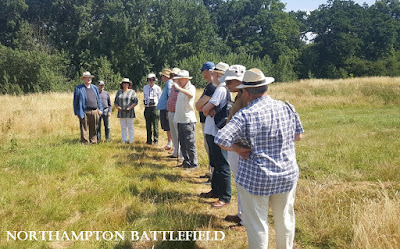 It was a pleasure to show people round and instructive to reflect how much our knowledge and understanding has come on over 8 years.  In itself it shows that local heritage activism works. 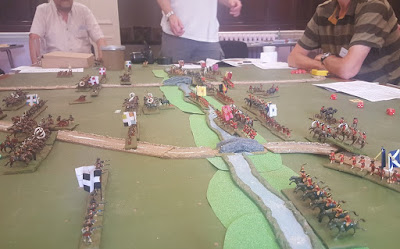 Not ancient and medieval but very much a project I have helped with, Saturday morning saw a very impressive run out for Trebian's War of the Spanish Succession game 'Va t'en Guerre' ...

Later, I gave another run to the Tony Bath wargame complete with some new accessions ... 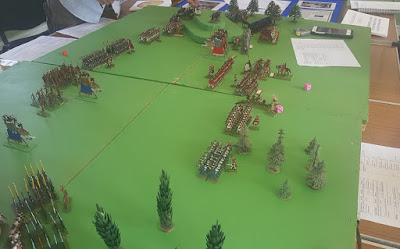 (the Tony Bath wargame reconstructed with the original 1960s flats)

We are making some progress toward a playable authentic version of this classic game.
Some aspects are timeless innovations that have become mainstream - other bits have fallen out of use as better systems have been devised ... nevertheless, this is where today's ancient wargame began. 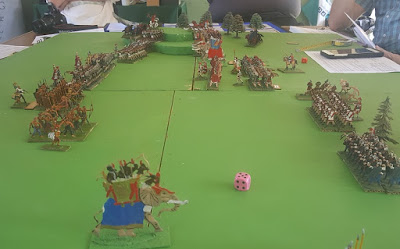 In this play through, archery made a bigger than usual impact, none of the light troops running way, and a group of 3 elephants being shattered by bowshooting (2 elephants killed, the last being panicked and out of control - though, it must be said, it went on to do considerable damage albeit not under the direction of its notional commander!) ..

We also added some chariots into the mix (at the far end of the table) with mixed results.

Also over the weekend I played some WWII games, tried to capture Gordon at Khartoum 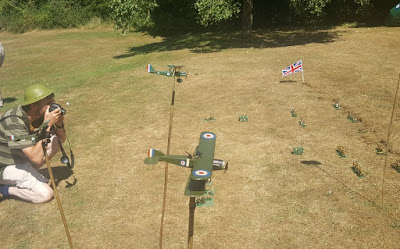 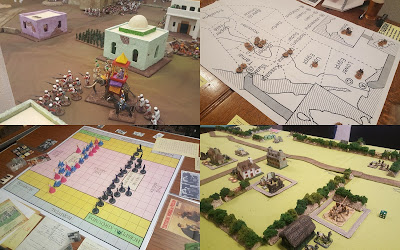 A great stress buster of a weekend in what has become a hell of a year.

Always a great event ... but book early if you fancy it.  Everyone's welcome but it sells out very quickly these days ... 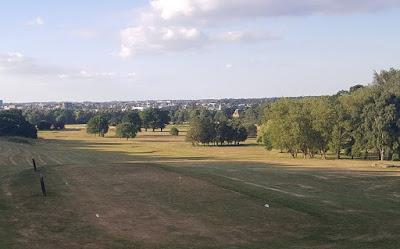 (CoW 2018 Friday excursion ... looking over Northampton battlefield from the Eleanor Cross position)
Posted by SoA Shows North at 3:14 PM No comments: Links to this post