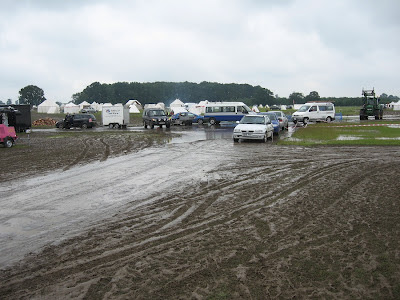 Due to overnight rain washing out the campsite and rendering the public arenas unuseable.

Unfortunately I had to go in anyway.  I was putting on some wargame displays for the Battlefields Trust and had set up the afternoon before ... so had to splatter my way in to recover the kit. 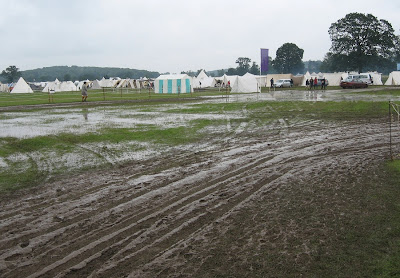 In truth, things were looking dubious all week, but a dry night, and a sunny warm morning (which were possible given the weather forecast) would probably have made this one of those successful events that had isolated car park issues ...

As it was, the site was completely unusable by daw - the above picture shows what it was like by 10am without admitting thousands of visitors!

It has been a dry, bright (ish) weekend in Northamptonshire - so had the ground permitted use, it probably would have been better weather than last year.

My sympathies go to everyone who travelled miles to get to the event only to be turned away, or to those already on site who lost personal items and had equipment ruined in the mess. 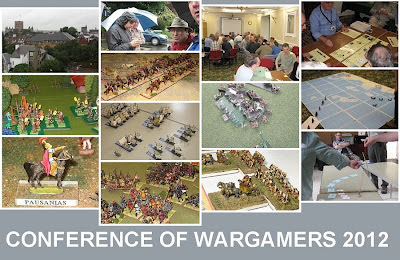 Wargame Developments' Conference of Wargamers is a highlight of any year - the only opportunity this side of Historicon to sample such a wide variety of wargames - and at COW they have a more European flavour and pace.   And many of them are innovative or at least exploratory in their format. 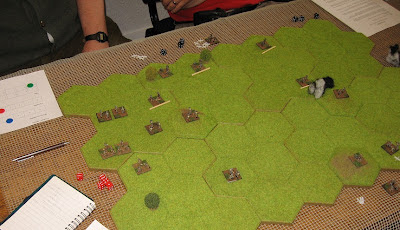 This year, for me it was a little like pulling one of those 1960 wargame compendia type books (a Featherstone or a Grant) and doing it for real. 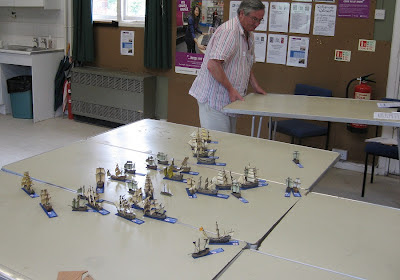 (moving the tables up as the Felissima Armada progresses)

Jim Wallman entertained me with a Spanish Armada game with Airfix plastic ships (and some scratchbuilds) as well as an outdoor game (indoors) played with 54mm Britains plastics (what I was using in the 1960s) and toy canons ...  I solved my unresolved terrain conundrum for Plataea by building a sand table - a first for COW perhaps ... and two of my games used flats ... 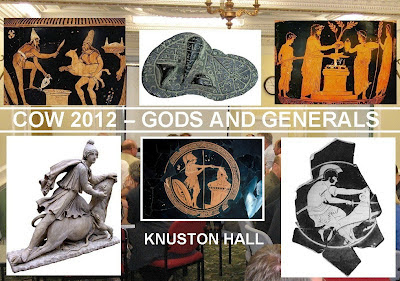 (Images from the gods part of the ancient history talk)

In addition to hosting a joint session with John Bassett on Gods and Generals (a follow up to the short 'Bloodletting at Plataea' contribution I made at the BattleDay), and the Plenary Game (the whole Conference were fireteams in Vietnam holding a base perimeter ...) ... I played or hosted 9 or 10 more games over the weekend.  I sat in on a number more .. 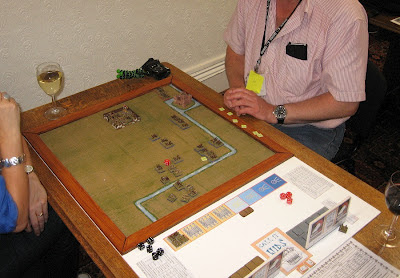 Graham Evans presented his Society of Ancients Kadesh game (get your copy here ...) ... 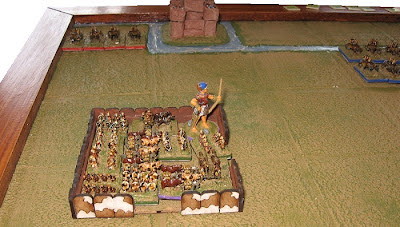 ... and I hosted a number of ancient warfare session or games ... 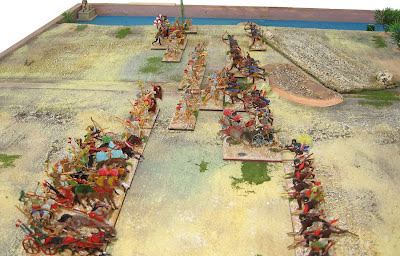 (Lords of the Nile - V3 DBA in the Late Bronze Age)

The V3 DBA tryout was popular with players who had sampled my treatment of the current game last year in the Zama reconstruction.

The Plataea project remains 'work in progress', I'm afraid - so COW had part 3 of the ongoing experiment adapting Neil Thomas's ancient rules (AMW, basically, though I am spinning adaptations off the earlier version in Wargaming - an introduction ...) ...

The refurbishment of the flats is not complete yet, and the summer has been so bad I've not been out in the garden building battlefields - hence the sand table .. 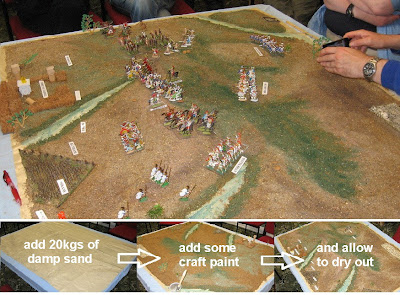 Sand table?  Yes - I got a couple of bags of sharp sand from the builders' merchants (one was actually enough), spread a plastic sheet out over my table and them moulded and painted  the landscape I wanted.  It worked sufficiently to last the session, and packed away very quickly once the game was done.

It probably took a couple of hours to set up (so needed to be a late night prep for a morning game session) but cost less than £5 in materials - and all bar the paint will recycle for a new project (or a better version of the Greek and Persian battle). 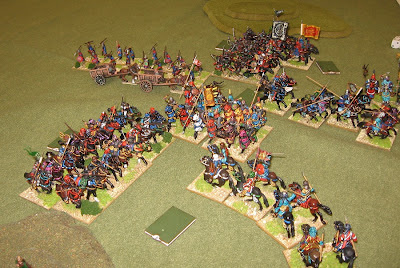 Fred Cartwright enhanced the ancients options with a splendid looking experimental game which he put on in 28mm, using Arabs and Byzantines for some 'small wars' ... (De Bellis Parvis ... ?) .. 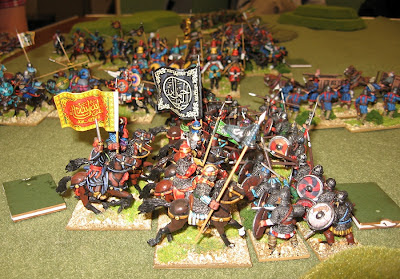 If 28mm isn't big enough for small wars, 54mm is the business for Little Wars.  In this case Little Garden Wars ... Jim Wallman's take on the H.G.Wells classic.

Although I confess it isn't the sort of thing I do every week, I quite enjoyed this carpet game (it was intended to play outdoors but the weather gods were not accommodating!) ... the casualty system (firing matchsticks) made an interesting change to rolling dice or turning cards. 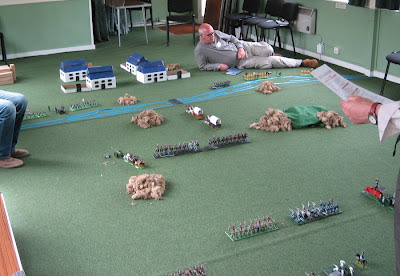 I'm obliged to note that Jim also inveigled me into a Samurai game that involved fighting already dead bandit people (yes, the dreaded 'Z' word): I embrace the possibility of some mythic value in hacking through legendary creatures in what turned out to be an entertaining little game - and then I will move on ... 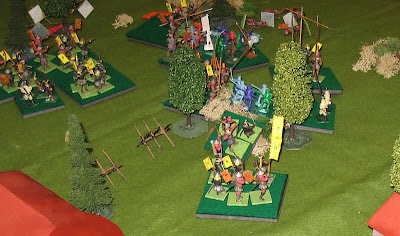 In the last pass of the last turn of the last game, my skyhook team successfully scooped Trebian's Cold War mission leader off a hostile ice flow - but that's another COW story.

You can join WD and/or book next year's COW at Wargame Developments.

The Festival of History is next week. 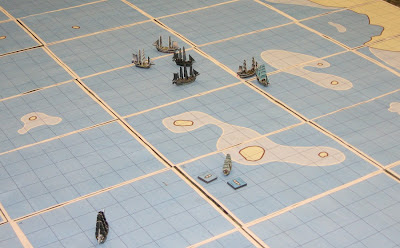 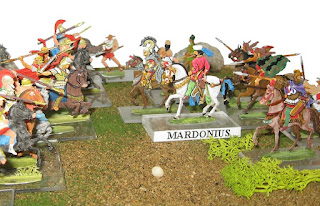 (more of those flats)


Posted by SoA Shows North at 9:33 PM No comments: 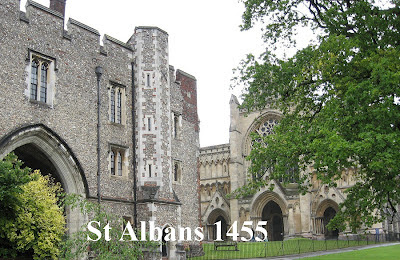 It has become customary for at least some of the travelling fraternity to gather for lunch on the Friday of COW at a site of miltary historical interest - and this year Mike Elliott showed us around medieval St Albans. 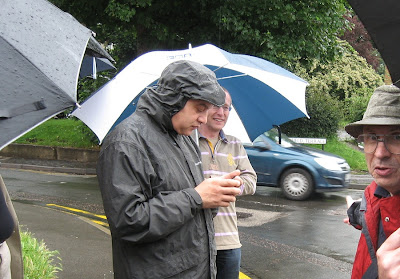 The so-called Wars of the Roses (discuss ...) began here in 1455 when the Duke of York and Neville Earls of Warwick and Salisbury pressed their claim in the face of Henry's Royal Standard - outright rebellion.

Henry raised his standard in St Peter's Street in the centre of the town, and the Yorkists chose not to defer but attacked the defences from the East, broke through the houses and yards and made their way to the town centre. 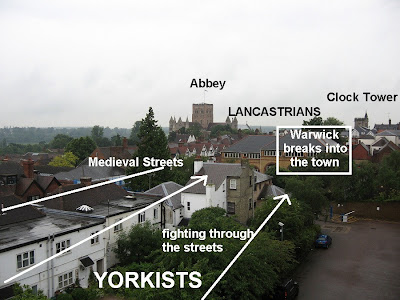 (the Battle of St Albans from the Maltings Car Park)

We got our best impression of all this from the roof of the Maltings multi-storey car park.

In the picture above, Henry and his household were stationed in the centre of the town, then, as now, running from St Peter's Church (just off to the right) and the precinct of St Albans Abbey where the king had appartments ...

Amidst the confusion of battle (and the general confusion that surrounded Henry VI customarily), it is almost certain that they were taken by surprise when Warwick's men broke throught the timber and daub walls of the medieval shops and burst into Chequer Street. 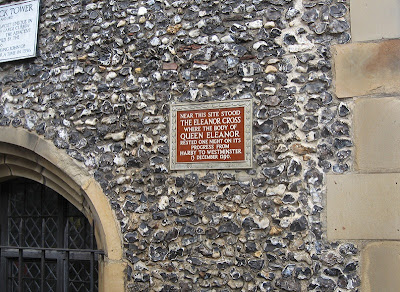 (all this in the sight of an Eleanor Cross - just as would happen at Northampton, 5 years later ...)...

Mike has identified the point where Warwick broke through, the buildings of which lasted pretty much until the first War ... so have their traces in early photographs.

Although the 'battle' took only about half an hour, the melee in the town centre saw the Lancastrian champion, Edmund Beaufort (Duke of Somerset) killed along with Northumberland and Clifford ... and as was to become a feature of the period, Henry, himself, captured.   The anti-Yorkist faction was decapitated and the Nevilles were in the ascendance.

We finished our tour at the abbey ... 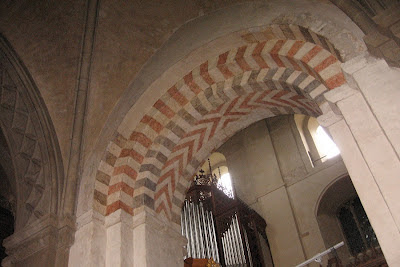 (Romanesque details in the historic abbey)

... and reconvened at COW for a weekend's wargaming and symposia ...

Posted by SoA Shows North at 7:42 PM No comments: 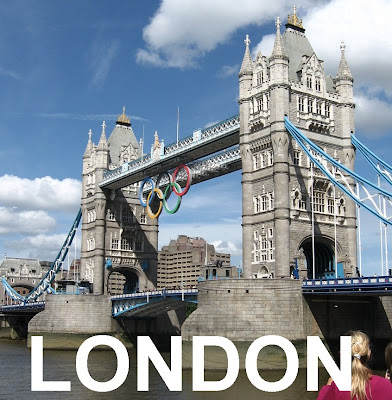 There were no wargames shows (within my remit ...) at the weekend - so, needing a complete break, I went to the London Toy Soldier Show.

By sheer coincidence, the SoA had a Committee meeting that day and I was able to drop some items off with them and enjoy a couple of drinks ...

Then off to Bloomsbury. 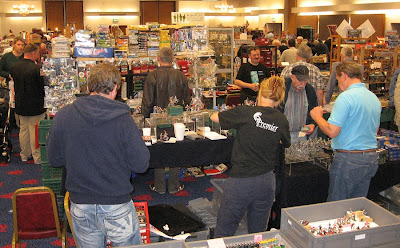 The Toy Soldier Show is a bit like a trade and bring & buy combined, with no games or societies.   But it is full of 54mm figures, from the brand new (and very expensive) to boxes of used plastics which could be rummaged at 25p/figure. 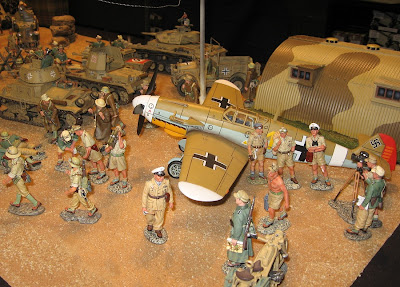 (this display was clearly inspired by the Ad Hoc '19:42 from Benghazi' participation game)

I was there to find 54mm plastics to support the Irregular Miniatures figures for my Bosworth game. 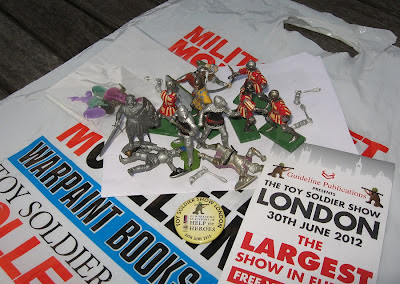 (a useful handful of medieval figures)

And I also found some of these old Britains (HK made) plastics in the cheapies section ... 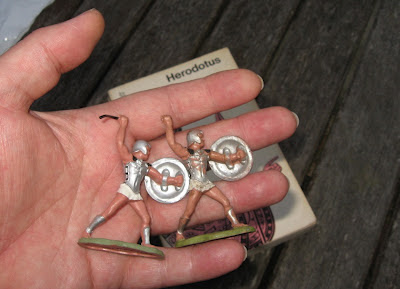 I also enjoyed a few hours of tourism - I was fascinated to see those hugte rings on Tower Bridge (so like half of London, it seemed, I went down for a look) ... 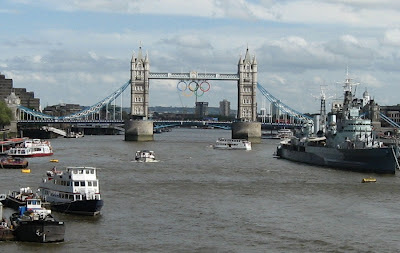 It was a very popular sunny afternoon with lots of entertainment and general promenading - looks like there's a big festival of sport coming to town!

Anyway, enough pics there to make it seem like I was taking the weekend off!

The Toy Soldier Show was a very different experience.  Useful and interesting and I picked up some bargains.   I did miss the games and bonusses you get at wargames events, however (just trade is no substitution!) ...

COW next - then the Festival of History.  Bosworth should be done by then.  Watch this space.