CARTHAGE AT THE TREBIA ... Neil Thomas's Ancient and Medieval Warfare meets the public of Milton Keynes.
What? Well yes ... Campaign is MKWS's annual 'open day' ... and unlike most, with the Milton Keynes club, it really is open. 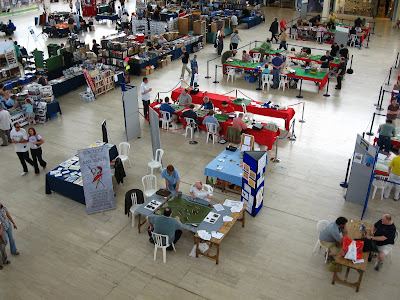 As you can see, the event is held in the middle of Milton Keynes Central shopping Complex - the Middleton Hall exhibition concourse. Once a year, organisations like the Society of Ancients get to respond to their broader mission, and try to interest members of the public in wargaming and military history. And, although the National League event ensures there are plenty of 'converted' to preach to at lunch times, with a pitch right at the perimeter of the space, we are with the shoppers and browsers for most of the weekend. We were also joined, an unexpected but welcome surprise, by Chris Webber (whom Society of Ancients members will appreciate for his fascinating insights into the ancient Thracians) ... Good to see you, Chris, and thanks for helping out.
For our game this year, Graham Evans volunteered to polish up his 20mm plastics for a Rome against Carthage taster game using Neil Thomas's rules from 'Ancient and Medieval Warfare'. His stated aim was "..to prove you can put on a proper wargame as a participation game for complete novices...". We think he succeeded. 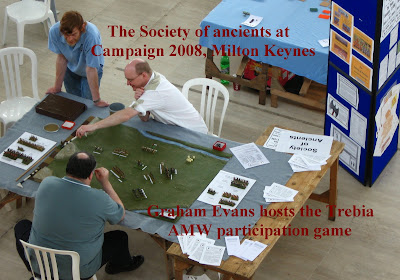 So a choice deliberately to appeal to the uninitiated: soldiers you can buy from regular hobby shops, and rules in a 'proper' book that ought to be available in your high street (or, as Graham likes to imagine ... in your local library ..)

CONFRONTATION ON THE TREBIA - December 218

The famous action of Hannibal on the Trebia was chosen for this game for obvious reasons ... it features the Romans, and perhaps their most celebrated adversary, and is a battle in which the elephants which so famously crossed the Alps fought in significant numbers: we therefore thought it would tick quite a few 'recognition' boxes. The action, of course, features an encirclement, and is a battle involving both bloody hand-to-hand fighting and grand tactical movement .. and so can showcase what the wargame with model soldiers does best. Graham's custom prepared battle board, and neatly organised ancillaries maximised the chances it would look good, too. 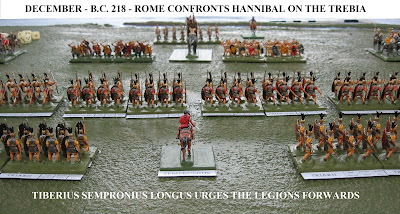 The decisive battle in northern Italy was prompted by the arrival in Cisalpine Gaul (the area of the Po valley, and modern Piacenza and Cremona) of Tiberius Sempronius Longus with reinforcements for the Consular army he and Scipio jointly commanded and with a will to force a battle. Scipio had been wounded in the Cavalry skirmish on the Ticinus, so Sempronius had de facto control.
Hannibal, commanding the Carthaginians, and sensing he could draw Sempronius into an attack, had sent his brother Mago off on detachment into the hills to ambush the Romans should they oblige. 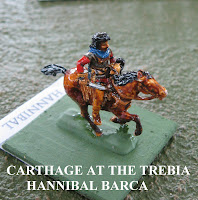 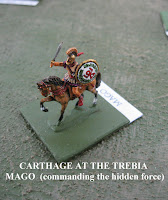 Responding at dawn to deliberate goading by Numidian raiding parties, the Romans set out ill-prepared but eager. Without the niceties of scouting or breakfast, they waded the icy waters of the Trebia and deployed for battle more or less on ground of Hannibal's choosing ... confident of the power of their legionaries ... seemingly unconcerned by their inferiority in cavalry ... and unaware of Mago's hidden force. 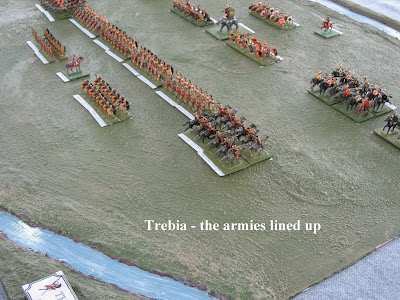 Thus formed up on the battlefield, this is where the players take control of the armies.
The game was a slightly adapted version of that explained in Neil Thomas's book. The tweaks were most evidenced in the layout of the armies, the distance between the battlelines, and the scenario allowing the Romans to move first (giving a crucial 'one turn's head start' to the Roman assault on the less powerful Carthaginian centre ..).. All the troops were labelled with their designations and game information ... plastic rings were used to mark casualties. 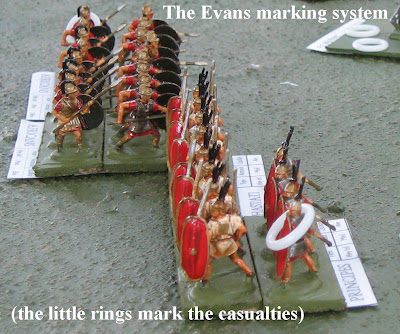 The Romans had the standard eight unit army, the Carthaginians starting with only seven on table (and no guarantee they would get that disadvantage corrected).
Mago's arrival was diced for on a turn by turn basis (with a simple time track beside the board).
The personality figures were decorative. The only major change that was made to the rule system was to double the number of dice in heavy cavalry melees to get the action over quicker. 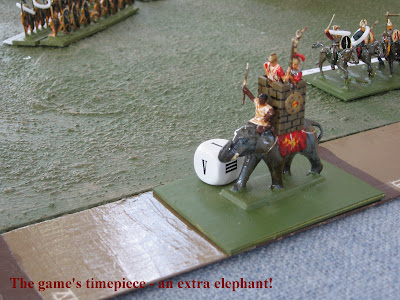 Each army had a roster area at the side of the table so that lost units could be moved there, helping manage the game (particularly with non-wargamers). 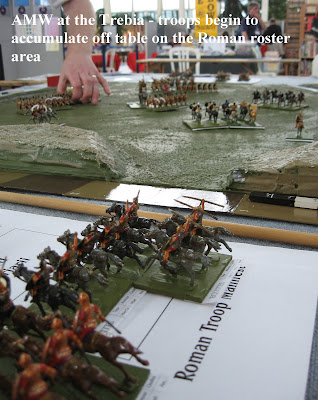 Mago's arrival was often 'the icing on the cake', the Romans having already succumbed to encirclement due to their already weak flanks.

However, careful playtesting and adjustment of the scenario meant that the game was nearly always in the balance til the latter phases, and the Roman power in the centre will sometimes prevail. Quite like history, really. The labelling and roster areas made resetting the game quite quick, and the games proved varied, entertaining and simple to play.

How did the games go? Here's Graham's brief summary of of them...

Game 2: Graham Rome, participant Carthage. Rome wins, due to over zealous attack by Carthage in the centre & reluctance on the wings. Plus Mago turns up late.

Game 3: Graham Carthage, participant - 9 year old out for day with Grandad - Romans. Espouses Romans are the greatest thing ever. Clear from fellow stand operators that we need to encourage this enthusiastic type of young player. He wins marginal victory. Graham finds out how hard it is to throw a game playing as Hannibal.

Game 4: Graham Rome, participant Carthage. Opponent is experienced Armati player. He loses due to over zealous attack by Carthage in the centre & reluctance on the wings (again). Gets units in the middle in a tangle and can't deploy properly. Elephant dies and goes berserk into one of his units, the African veterans. 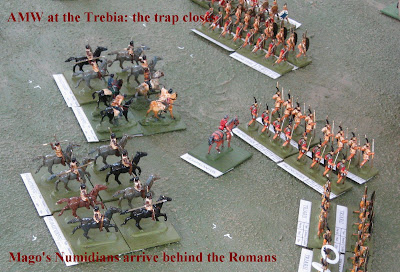 Game 5: Chris Ager Rome v Chris from Oz, Carthage. Chris from Oz has to go and check out from his hotel & Graham takes over. He survives one more turn. Can't really work out how on earth he got in this mess.

Game 7: Graham Carthage v participant Rome. Quote from Graham "Now I really didn't want to play this game, as it was getting late on in the day. However, as I knew the participant and he remarked that I was afraid to get beat, I couldn't really turn away. This was the most crushing win of the weekend, with the Romans going down 6 units to 2. I employed the novel tactic of about facing my centre and running away. This drew the Romans on into a Cannae like trap. I also managed to punch a hole through the middle with my elephant which then rampaged into one of the reserve triarii units. Then Mago turned up at the end of turn 1. As I fell back my opponent finally twigged it was a trap, but by that point his front line was sandwiched between Celts/Scutari to the front & Numidian horse from behind. Job done." 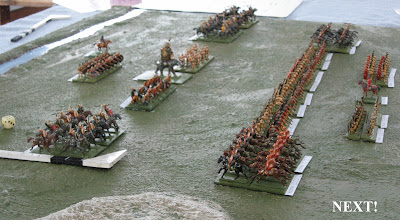 So that made it 5 wins for Rome, and 2 for Carthage. Maybe that Hannibal was a genius after all.

Our thanks, of course, go to MKWS for providing such an excellent opportunity to meet people and demonstrate the ancient wargame. Great show, and very well organised.
Posted by SoA Shows North at 6:14 PM

Labels: Battle of the Trebia 218 BC, Campaign, Neil Thomas's AMW

Something different gentlemen. Good to see the hobby being published so well. Interesting to see more pictures of ANCIENT WARFARE rules. I bought a copy but have not tried them yet. I mainly play dbm and am girding my loins to move to dbmm- which look interesting but require more mental effort than I can give them at this point in the academic year.

We will be doing DBA over the weekend at Partizan, and over recent years have done several Armati games, Strategos, and a biblical variant of RFCM's 'AK47'- seldom the real heavyweight DB games, though ... they can be quite hard to explain to passers-by, at times ...

Phil
Could you give me some more details about the variant of AK47 - it sounds most intriguing....
Alan

It was an application of AK's 'warlord' flavour to the chariot era which I was working on with Ian Russell Lowell. It was very well received outside the show team ... but it was one of those experimental projects that as a group, we were not 'as one' over - so moved on. There is a half-written Slingshot article which needs completion, and I hope Ian will contribute. It was played at COW, the 2006 AGM, and at Vapnartak last year ...

I'd say to tradgardmastare to try the MW rulesif he has a copy. The army sizes are easily accommodated with normal DBM size armies, and the game takes about 2 hours including learning the rules. 15mm figures play on 4 x 3 sized board, so set it up on your dining room table and run through one evening solo.

It is quite a quick game to get the hang of (much easier to get adept with than DBMM, even if you are an upgrader from DBM) ...

Might work as a quickie for resolving campaigns and stuff (which I'm guessing might be your kind of thing ....)...

Phil
Any chance of a look at the AK47 type rules - they do indeed sound fascinating?
Alan

...The game is self-evidently derived from AK47, and although Martin Goddard has been helpful and supportive, I don't want to just 'publish' an altered version of one of his games on the fly.