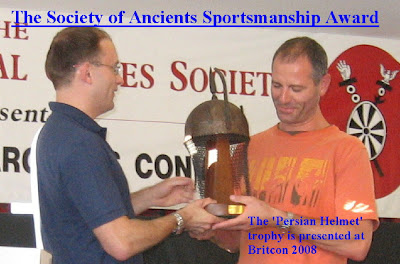 The trophy is presented to the top player from scores awa 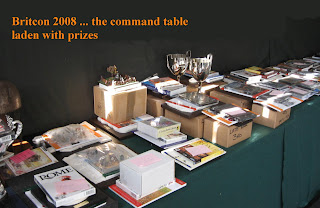 rded by their opponents over the six games. Congratulations to Pete who - whilst earning the respect of his fellow players - also scored enough game points to come third in the Field of Glory (15mm) event. Our thanks to everyone who participated in this scheme. It relies on the support of the players.

Great job, too, from all the event sponsors - the stacks of prizes at Britcon just seems to get bigger and bigger.

Show or no show, Britcon is about wargaming - and ancient period wargaming at that. A quick tally on my fingers suggests that over 120 players took part in the ancients categories this year. With so many players involved, the choice of many Committee members and activists is to enter the events over the weekend - so our thanks also must go to Dave, Steve and co on the Lance and Longbow Society stand for covering the Society of Ancients pitch as well.

Because of the big 'ancients' audience attending the event, we picked Britcon for a special promotion of the revamped Slingshot. Hopefully, any non-members who attended the show were able to get a complimentary copy of the July issue as part of their 'show goodies'. OK, a bit of showing off - we are proud of what the upgrading has been able to achieve ... but we also realise that the very best effect will be if the 'flip appeal' of the journal encourages a few more fellow enthusiasts to come join us.

Successive editors have done a great job maintaining the traditionally high standards of historical and wargames content and independent commentary. We must ensure that the production qualities draw as numerous and diverse a readership as that content merits. As I said to the many interested browsers at Britcon, joining up on-line couldn't be easier ... there is more information and a Paypal button at the website (here ...), and, if you want to get more details of what you'll find inside Slingshot, the editor maintains a contents and support page (here ...) . The Society, of course, offers an extensive range of publications and games written by our members, and, as well as Slingshot, membership brings access to that publishing scheme, special prices on Society goods, together with a long list of trader discounts between 5 and 25 %. 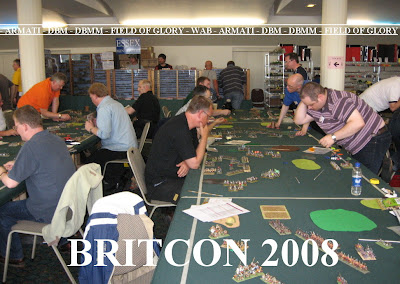 OK - that's what the show team did at Britcon ... we played wargames and gave out complimentary copies of Slingshot. What else went on? Well, part of the ceiling collapsed, it rained (OK, it's Manchester ... it rains ...) ... we celebrated the 50th birthday of a well-known Wargames Society President ... Mike Bennett won the DBM event ... Steve Metheringham won 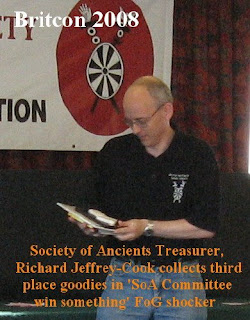 the Armati ... Ian Speed won the Field of Glory 25mm category, Stuart Whigham the DBMM.
The big one, the 62 player Field of Glory 15mm event was won by Graham Evans, and former SoA Committee man, Tony Garry, won the Warhammer Ancient Battles. Congratulations to all of them.

Indeed, current Committee members were not far behind. I'm sure you'll indulge me slipping in a snap of SoA Treasurer receiving his 3rd place award in the 25mm FoG event. Congratulations to Richard, who has found the time - in amongst keeping the ship afloat and resourcing the new Slingshot - to learn a new set of wargames rules more comprehensively than the rest of us ... (or that's what the results say, anyway ..).

The rest of the show teamers? Well, we gave it all our best shot in respectable mid table obscurity, Chris with his Later Crusaders, me with Hawkwood's 'old fashioned' Florentines...

OK, I did get a few photos, but I must confess that Field of Glory (certainly for us beginners) does take a bit of playing, and the Britcon schedule is very compressed. Why do wargamers want to start at 8.15 on a Saturday morning? With game time an issue, I much prefer the challenge of responding to a randomly drawn 'pre-set terrain' table than do all that faffing about to set up every game from scratch. I've done many rounds of the FoG set up game, now. It works. It doesn't look great (the BHGS gave up its half-hearted incentivizing of presentation a while back ...) .. and although it is less 'gamey' than DBM (in truth much of it is a return to the BHGS version of DBM), it is still player manipulated, so is still artificial. Of course, the price of playing over such a player manipulated felt landscape is getting up unreasonably early and not having any proper breaks. I hope the BHGS rethink this aspect of an otherwise great weekend. We should have a more civilized mix of game time and social time (and start time...).. 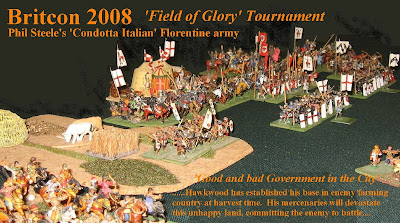 (everything drops a morale grade because they're Italian - even if they are veterans of the 100 Years War ...) - just like the WRG games.... Never understood that. Historically, these are the most accomplished, experienced and professional armies in the history of medieval Europe. But in FoG it's low grade because it isn't English, French or Serbian. So its cheaper, but needs to keep very compact and mutually supportive.

I like it because it looks great, it is unashamedly Italian, has as good a mix of flags and banners as it does of troop types - and you can command it with the Diabolical Englishman .. the greatest soldier of the age. Oh yes, the condottieri never were broken, and, without ever routing, the army won more games than it lost.

Good games. Thanks everyone.
Posted by SoA Shows North at 1:12 PM