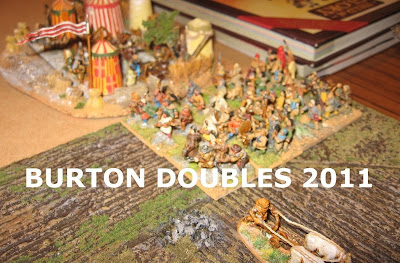 It's probably called Badcon these days, but we still just call it Burton Doubles.
Having had the last two Burtons brutally affected by winter weather, I was feeling good about this year. Although I have committed to a couple of Armati rounds, and the DBA League beckons, I have pretty much given up on 'full game' singles, these days (too long, too 'gamey' and a bit repetitive for my tastes, really) ... so the early year rash of Doubles events is something I look forward to.
Doubles is a nice, sociable, game format, and a good chance to catch up with players (some of whom I have known across the tables for more than 20 years but seldom see outside the 'circuit'). Burton, itself, of course, is one of the homes of the brewing industry ... so if you do want to enjoy a chat ....
Following its time-honoured sequence, this year's event would be what was once the WRG Book IV period. So knights a-plenty. Mostly FoG, of course, there was also some DBM and MM.
Although quite a few international players had already left for NZ, 50 (fifty) teams entered the FoG tournament, and we were graced with the celebrity authors ... Phil Barker playing DBMM, and author (and Society of Ancients co-Champion) Richard Bodley-Scott playing FoG. Everyone had a great weekend.
Eric Doman made a rare appearance (not only is Eric a great player ... my one and only DBM tournament win was when standing in for Eric's regular partner in the Society of Ancients Doubles ... so he can clearly do well in even the least helpful of circumstances).. 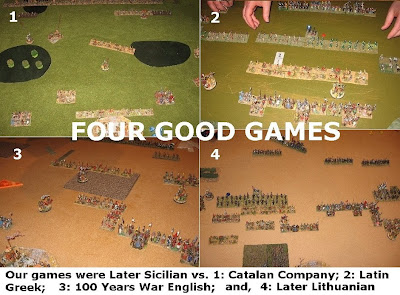 Taking advantage of the period, I chose to give my later Sicilians another run out ... a good excuse to continue/complete renovating this much-loved army that dates back to 7th Edition.
In FoG, I think it combines the merits of being good-looking, effective and easy to play. Well the Phil Steele Version is easy to play, anyway (it is one of those lists that allows quite a bit of variation - which, as the list covers Angevin as well as Hohenstauffen, is about right): my simpleton's army being roughly 25% light foot, 25% light horse%, 25% knights and the balance in variable infantry.
All the light foot and all the light horse have bows.
So nice and clean, and not much fiddling or remembering to do.
Our four good games were against Catalan Company (1306AD) ... Latin Greece (1266AD), ... HYW English (continental), ... and Later Lithuanian (1400AD) 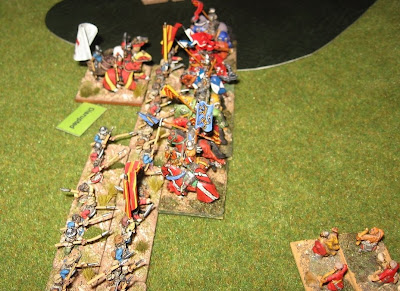 (A rare oportunity to get into the Catalans)
Clearly, it wasn't going to be easy to miss Catalan Company or HYW English they accounted for 20% of the draw. (4 and 6 entrants respectively, perhaps it tells you something about FoG's drilled Medium Foot problem ...)...
The Catalan Company proved a tough nut to crack ... there was terrain in the way of our knights, and try though we might, our skirmishers could scarcely dent the Almughavars (Wayne and Lynn had taken an IC, so we were trying to inflict multiple cohesion fails on superior troops with an IC in command range ... for non-Foggers still with us, that means morale tests with rerolls and modifiers in their favour, and we're usually going to get nowhere).
We got some traction, but the Catalans are very dangerous as drilled Medium Foot outmanoeuvre Knights in FoG (pick the bones out of that if you will) and we got the worst of a timed-out game. 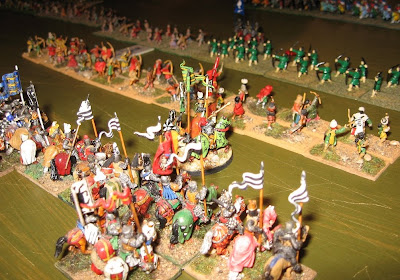 (shaping up against the Greeks)
We fared much better against the Greeks - an army much like the Sicilians but played much too aggressively given the fluid mix of troops they were up against. We had the tactical edge in a lot of otherwise straight up fights, and were about a turn or so off a decisive win when the sun went down.
Our maximum win came against the English Longbows. Interestingly, our 25-0 at last years SoA Doubles came against English, too, so its 'single theory' is clearly weaker against a balanced but powerful army.
We lost the opening initiative, which proved decisive: although they get the edge on terrain placement and deployment, we get to move first, and can, hopefully, steal any terrain near the middle of the table.
The game was resolved in a massed fight for a centrally placed enclosed field - defended by us with a skirmish line backed by Saracen close fighters ... attacked by Longbowmen. A slight edge to the Saracens in hand-to-hand if the skirmishers can protect them from the shooting. A better edge if the skirmishers can register some hits on the English too, before they have to run off. Which is what happened.
On the other flank, our skirmishers ran rings around them and got even more traction. Then, with our lighter troops denying the English any security from the broken ground, the knights confidently went in on the archers in the open, survived the arrow storm, and put them to the sword. 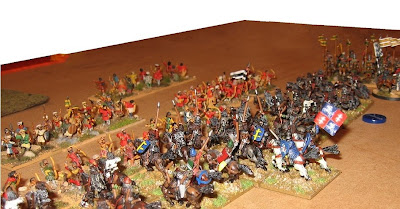 (a massive skirmish to contain the Lithuanians)
Against the Lithuanians, we pretty much executed our plans, but the dice gods did not play their part, and we were battling up hill (metaphorically) all afternoon. We got some good things going, but Lithuanians do run away extremely well.
We lost a bit of time in a prolonged discussion of a tricky position where neither team really wanted to embarrass themselves by calling an umpire ... but, on reflection, it would have been wiser to do so, as four minds couldn't resolve it, so some time was lost from the game. 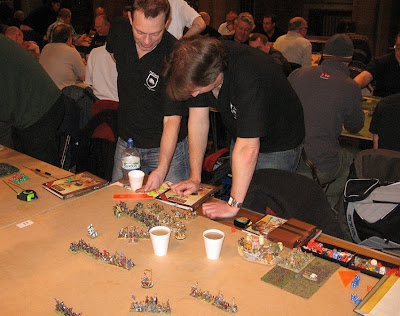 (Paul and Paul try to figure out a confused skirmishing mass locked together near the table edge)
Timed-out with the advantage to the Lithuanians.
Dave Rehead & Leslie Mitchell won the FoG tournament with Mongols, Tim Child and John Hickman the DBMM with Venetian, and Jez Evans the DBM (with Khmer) 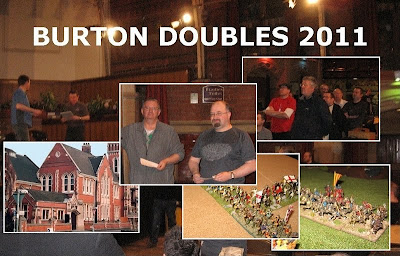 (Scenes from Burton 2011, with the FoG winners centre stage at the prize giving)
All the results can be found here on the Slitherine forum
We came 15th out of 50 in the FoG.
All in all, a great set of games, challenging and entertaining in equal measure. We achieved most of our objectives, scoring above par, routing the enemy, killing generals ...
There are several one day Doubles rounds to come from the Northern League, the Society of Ancients Doubles Masters is in September (3rd and 4th) at Fitzharry's School, Abingdon.
Details can now be found on the BHGS website. 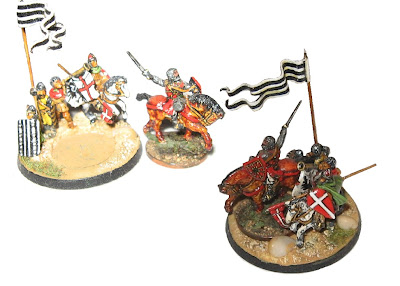 An example of one of the Commanders I use: a round staff element with a detachable personality (in this case the king of Navarre) ... on the base, the commander is acting in his normal command capacity; off the base, he is fighting in the front rank.