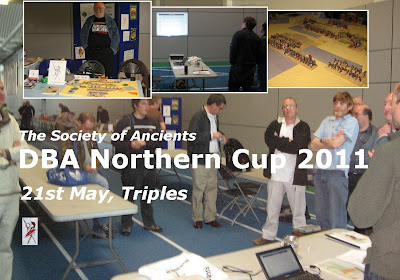 Apologies to anyone who tried to find us a Triples on Sunday. We got no 'up front' volunteers for the second part of the two-day show (and as our Saturday is tied in to the DBA Cup I went with that).

Often times, the Sunday is the less productive at these 2-dayers (nevertheless, Graham E offered to run his the Elephant In the Room, so it all would have fallen into place, but I had crossed the Sunday off by that stage) ...

So although in the end it was an administrative glitch, the underlying message remains - no volunteers - no SoA stand.

Then again, boy did we pack it in on the Saturday! Me? I actually got no shopping done, there was so much to do. So there are no pictures here from the show itself this year (though on my brisk trip around looking for people I needed to liaise with I did go past quite a few interesting exhibits). 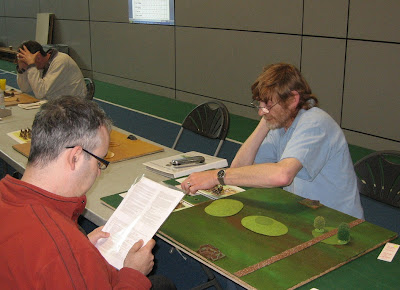 (for Team SoA, Chris takes on 2009 Champion - and SoA Postal sales despatcher - Graham Fordham)
From the Society of Ancients, Graham F was playing in the DBA Cup, Will, Chris and I were doing the stand (and potentially making up numbers if a scratch tag team was needed to balance the draw).

As sometimes happens, there was indeed a last minute adjustment, and Chris and I combined to uphold the honour of the sponsor. We played 5 games (I lost all three of mine, Chris - who has not played for ages - won both of his ... is there a message in that ... or am I just rubbish at this game :O) ...) .. 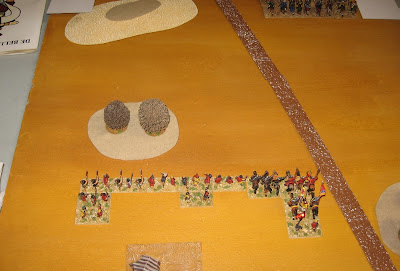 (Cilician Armenians take the field against the Seljuks)
The Northern DBA Cup poses players with a random draw of historical set-ups: the scenario fixes the terrain, start edges, invader/defender and the army compositions ... the draw allocates who gets which army and the game starts with the defender positioning his camp.

The set up obviously allows games that pose unusual challenges (my final game was Nubian vs Libyan .. almost identical armies and mostly Ps vs Ps - quite a novel game) and takes away some of the more gamey features of open tournaments. Of course there are always questions of balance, and you are not master of your own fate in all respects. However, as someone who has never really taken to the WRG set up procedures, I am glad the UK DBA season has events like this that enable plausible battlefields to feature. 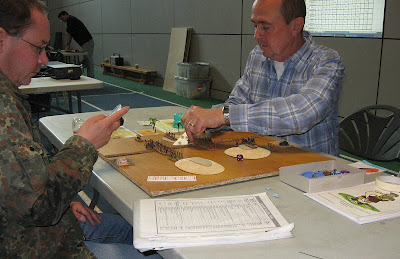 (Slingshot reporter Martin Smith in action - Martin went on to win the event)
On the question of balance it was amusing that the most 'unbalanced' scenario was, apparently, the 'Andalusian *Civil War*' where both armies were, in fact, identical. The defender lost every game! This either shows you that matters of balance are a lot of hot air (because even where you have exactly the same armies chance can make one side a consistent winner) - or that when all else is equal, being the invader is a decisive edge (or, of course, if all else is exactly equal, with armies like those, and a battlefield like that, the edge will go on the invade/defend decision ...) ... 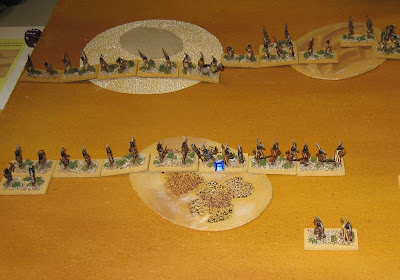 (Libyans - nearer - vs Nubians ... the jewel marks out the general's element)

Meanwhile, on the stand, we had a little go at a DBA Medieval skirmish game I had devised (which didn't really work very well - something new, but early days I'm afraid) ... and fitted in a super game of my 10mm Zama 'Double DBA' game.

In this running, Hannibal got a decisive edge breaking through the centre with the elephants. Although the opening engagement was only won 3 to 4, in that phase the Romans had had to feed in some supports from the Principes in order to hold the line, and had lost 2 elements in the process. 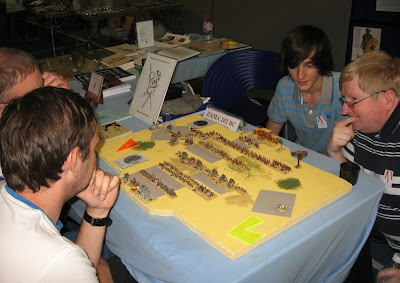 (Hannibal - nearer - and Scipio face off at Zama)

So when the first lines made way for the final encounter, the Romans were already 2 down. Surprisingly, having made this headway with the elephants, Hannibal chose to retain not one of them into the end game, but some cavalry on the wings. The coup de grace was then delivered by outflanking attacks rather than attempting the hard work of defeating the Roman infantry frontally: very clever, and a tactical combination (instinctive or thought out) I had not seen tried before*.

A fascinating battle. My thanks to the players.

In the Northern DBA Cup, the top ten places were

The Sheffield event was the furthest north for the UK DBA League this year. Whilst at the show I was able to squeeze in a chat with Kim Daniels of Monarch Books - and organiser of Eastern Front, which will hosting our new east of England round. I will be sending out details shortly, but make the date in your diaries sat 21st August ... East of England DBA at Eastern Front in Norwich.

It would be especially good to encourage DBA players from East Anglia to join in this one ... there must be plenty of you, so please get in touch. There will be prizes and freebies associated with the event as well as credits towards the SoA UK DBA League.

Next outing for the Shows Team is Partizan: come along and play The Elephant in the Room.

*generally, if the elephants do win the encounter, it is an obvious choice to retain some of them to try to finish the job. In fact this 'Norfolk' approach 'they have done their job now - we'll let them be removed and instead retain an edge on the flanks where now Massinissa has had to withdraw' has a claim to be better thinking (depending on the circumstances of the game, of course)...
Posted by SoA Shows North at 11:30 AM