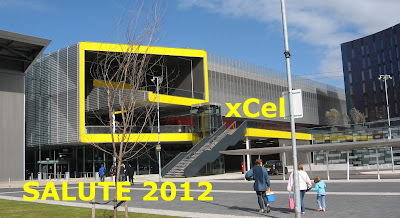 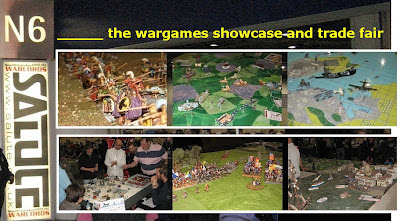 Salute seems finally to have grown into its relatively new home at ExCel in London's redeveloped Royal Docks.  Yes, the venue is huge, so the acoustics are not great, and flash photography can be tricky ... But it pays to  walk every aisle, and stop periodically to take another look around (there is often something you have missed - sometimes the very small games are excellent and the very big ones just very big) ...

The Society's contribution was a participation game of the First Battle of Chaeronea ... 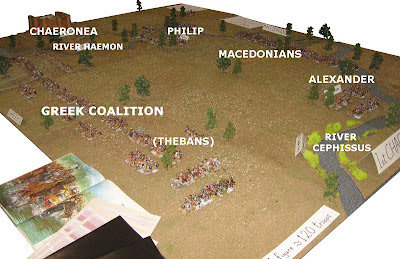 ... the Macedonian defeat of the Greek Coalition, reconstructed by Philip Sabin's team of Eric Cruttenden and Alan Waller, and run by Phil using his Lost Battles system.  It was, of course, Alexander's first appearance on the world stage, leading the noble cavalry in his father's army.

We know quite a lot about this battle - but by no means everything ... so it is an ideal battle to set up historically and explore the what ifs. 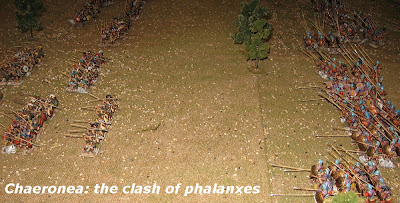 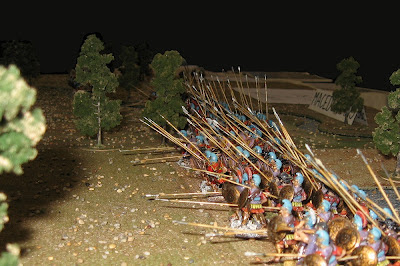 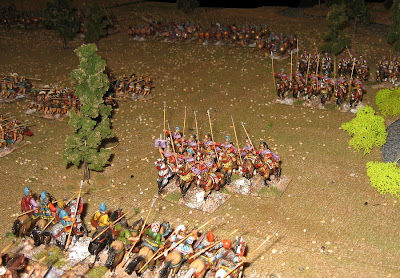 The battle ran through quite smoothly, and as is usual with Lost Battles, was able to be played several times during the day.   Alexander rode to glory at the head of the Companion cavalry but the Theban Sacred Band proved very tough opponents and drove their way across the table.  And by no means a one-sided encounter if you take account of the handicap the Macedonians enjoy as the more powerful of the armies.

This year was a good year for ancients enthusiasts with a wide range of games across both the more popular scales.  I can well remember some years back at Olympia when the SoA game was the only pukka ancients game in the building.  Not so today.

How about this as a little trip round ... 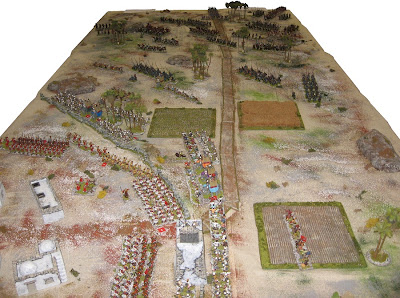 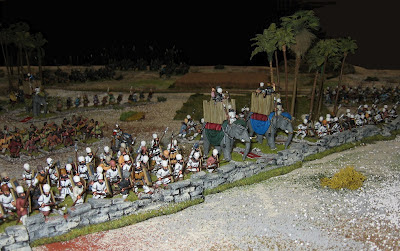 Some nice 'massed' 28mm, and quite an effective use of 'cloth + scatter' type terrain. 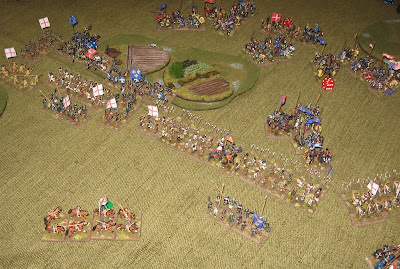 I was very pleased to see Donnington/Ancient and Modern's 100 Years War FoG game: this is a very popular, almost ubiquitous, tournament game - but rarely does it get demonstrated and profiled at shows.  For good or ill, games should always meet the wider audience. 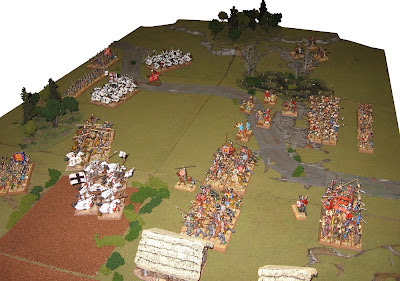 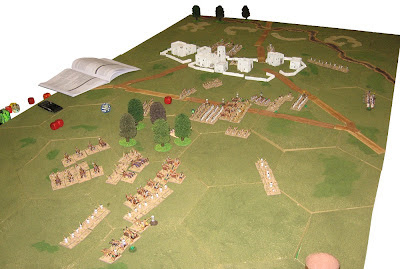 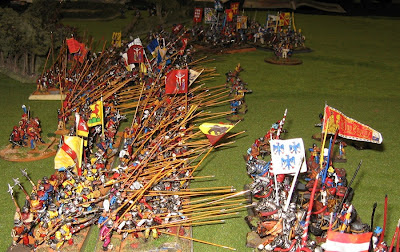 Another splendid Lance & Longbow Society game (remember Verneuil?) - with an emphasis on the figures rather than the simple layout.

There were also a number of Japanese games at Salute this year ...

I really liked the townscape in the Oshiro offering 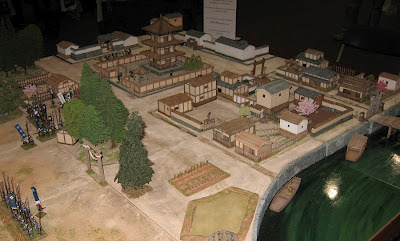 Although there are some oddities in the cast, South East Essex's HOTT Kingdoms in the Dust is basically an ancients game, and I have seen it giving a lot of pleasure across a number of southern shows.  I hope they had a good day at Salute. 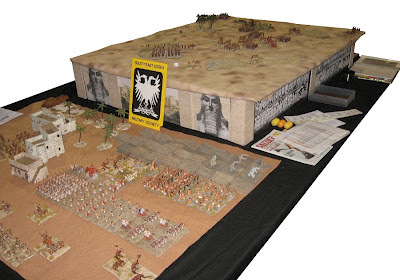 Society member Rob Broom and his Bristol chums were also there with the Peloponessian War battle at Amphipolis (422BC), notable for the mortal wounding of the much-quoted commander Brasidas. 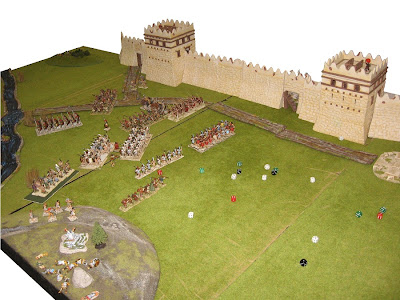 A great collection of games.

If there is anything less than positive to say it might be that although there were a number of imaginative and innovative approaches to the wargame on show at Salute, mostly these were in the non-historical genres ... pulp, VSF, that sort of thing

Some very clever stuff going on ... and again, a great variety of games and ways to wargame on offer out there.  I very much liked 7TV's take on  classic adventure TV (the Avengers, Dr Who, that sort of thing ..).. presented with enthusiasm and confidence ...

Aside from the very big Corunna Napoleonics display (much too much to take in, and clearly there to be admired and photographed - an installation  more than an exhibit, to borrow terms from the art world), there were some excellent and accessible games in other periods ... 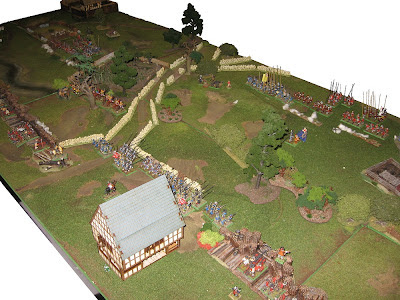 The Pike & Shotte game going with the Warlord Games rules had a very clever flashing lights effect in the volleys markers which worked quite well - and they tell me the game has got better too.

And, having clambered around those impossible Confederate positions, I never like to miss picturing Burnside's bridge when Antietam is reconstructed .. 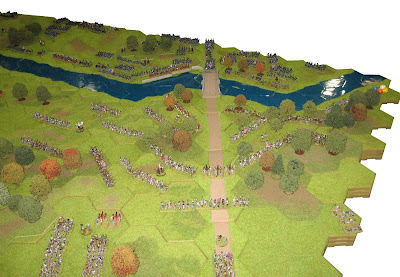 There were more than 25 modern games excluding VBCW, Sci-Fi and similar non-historical genres, and the best I can do is to direct you to a brief summary I have put on my 20th Century blog (P.B.Eye-Candy) 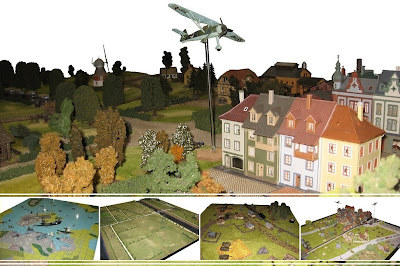 (Some wonderful 20th Century games at Salute 2012: click for more)

... and there were some other gems.

I really do like the use of aerial/satellite photos as a table/background for aerial games ... here with 'clouds' terrain (I have some ideas about clouds ...) .... 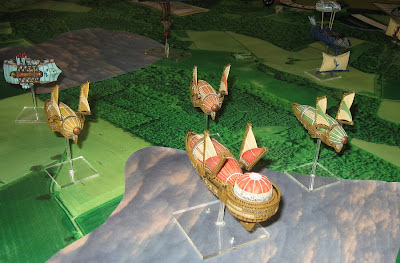 And who could not like the wonderful miniature architecture of imaginary Venetian horror/adventure ... I've no idea whether Carnevale is a good game, but it must have been fun building the sets ... 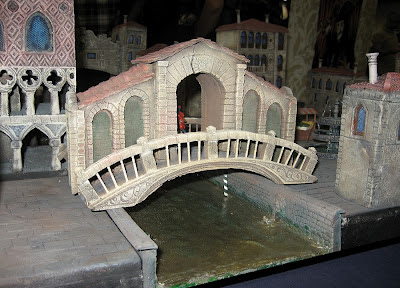 A great deal to look at, then, even if like me, shopping is not a big part of your agenda and, being a historical player, a big chunk of the exhibits are of not of interest.   Very well done, Warlords. 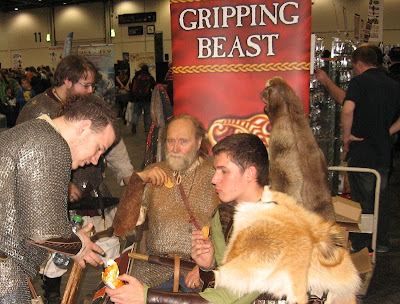 An excellent day out, and a pleasure to meet and greet and chat to people.

Thanks to those of you who called by the Society stand to say hello.  Thanks to the Warlords for making us welcome. 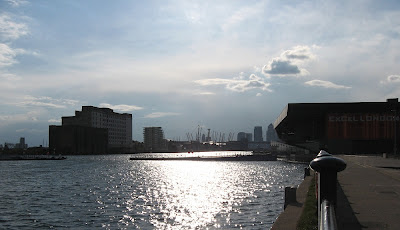 Next outing for the shows team: Campaign in Milton Keynes - it's in a shopping centre, so you can bring the whole family.

We will have a participation version of the new game 'Call it Qids' and another chance to try DBA V3 with my classic flats collection.

Excellent round-up of the show and a great looking participation game. I didn't get a chance to play anything as usual...its difficult to see everything, explore the traders and play games when all you have is one day.