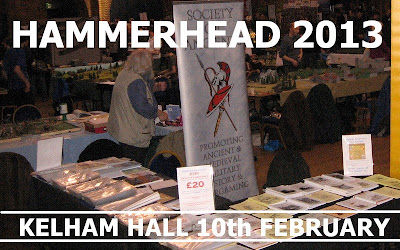 Many thanks to COGS/GCN for a great day out at Hammerhead.   And thanks to everyone who stopped by and/or played the game.

First up, just to say that although it does capture my vision, the version of Bosworth at Hammerhead was very much still Work In Progress: the bad situation heaped on my shoulders by Vapnartak stalled the final stages of what was originally scheduled for the start of the month.

Well, I eventually got back to completing my tasks on the unloved project with a few days to go - but encountered some unexpected delays: in 54mm you can't always get all the components or variety you want so I had sculpted some masters which just needed casting to complete some of the elements.   Hmmm - but I hadn't left sufficient time for my mould to be a complete failure (the one and only home casting failure I have had).   Inevitably I wasted more time than I had available. 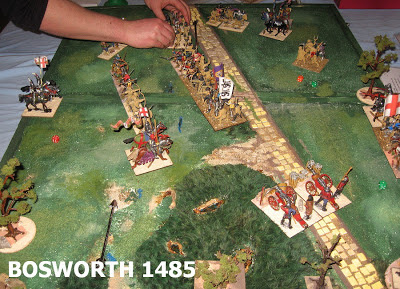 (The Battle of Bosworth as a 54mm DBA game)

Still, Hammerhead is very much a games, rather than an exhibition, show - so a very late night ensured the nearly finished project was ready to play.   Yes, half the foot figures are a bit ghostly, and those bases are not harmonised with the battlefield yet.   But come see us a Alumwell ... 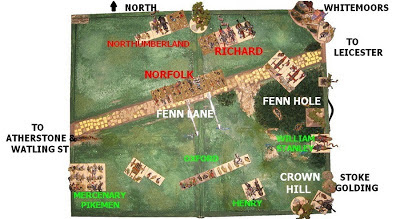 (Battle of Bosworth: aerial view ... click it for a larger view)

This is the battlefield based on the new location.   Roughly arranged on a standard North/South orientation.   The battle takes place in the fields around Fenn Lane, the old Leicester to Atherstone road, just east of where it joins the Watling Street.   Whitemoors Car Park (probably the site of Richard's baggage/rear area*) is just off table in the north-east corner, Stoke Golding just off the south-east corner.

Crown Hill is the gently rising ground in the corner, Fenn Hole the marshy area which Henry left to cover his right as he attacked the Royal army. 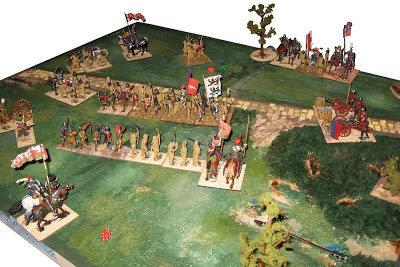 Losing 6" at the back was a compromise for the convenience of the fold-away battlefield.   It is actually no loss - it means the standard DBA camp elements must be left off - but as they play no part in the historical battle this probably no bad thing.   Even so, I have put some baggage behind Richard's side of the table as it helps those familiar with the area by marking Whitemoors which is on the traditional battlefield trail. 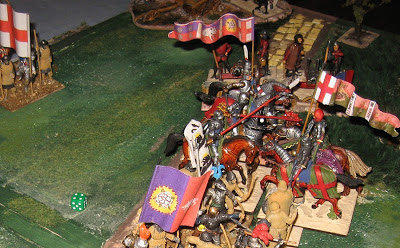 What I like about Hammerhead is that they have successfully created a show where people play and enjoy the games.   Bosworth got played an impressive 7 times.   Just what I want having gone to the trouble of designing and testing the scenario, then taking it all along to the show.

Most of the games were played with people unfamiliar with DBA, and generally not ancient/medieval (indeed 'historical') players.   The fact that V3 of DBA is still not available is a bit of a downer as we had some converts ready to buy.  The best I could do was steer them to John Curry where you can now get a reprint compilation that includes version 2.2 (all the lists, some articles on tactics and refights etc.) ...

Ancients on the Move regulars will recognise that I supplied the photos!

Most of the games gave us a historical outcome (vindicating, perhaps, Mike Ingram's inreptretation of the battle, which I have used for the scenario - orbats/deployment) ... though, as usual with DBA, no two games were alike.   As several pundits pointed out, re organising the space around the table, I do need somewhere to park the casualties!   More anon. 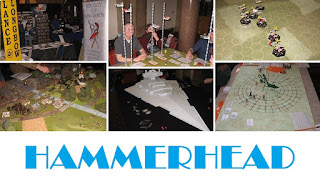 (some of the other stuff I saw at Hammerhead)

Elsewhere, there were a number of interesting trade stands and some familiar faces trying out some unfamiliar (and familiar - check out that prating mantis in the middle of circular battleboard ... surrounded, all elephant-like) ... More of the games were fantasy/Sci-Fi/pulp genre than historical - but for all that, looked considerably more imaginative than some of the dry colossal games today's historical exhibitors too often clog the halls with.   Great to see plenty of youngsters playing wargames!   Hopefully, we sowed a seed for the future with them. 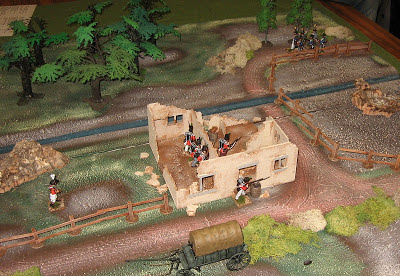 Amongst the historical games, there were a number of 15mm WWII games (not all FoW), some aerial combat games and a compact and well produced Napoleonic game.   The shoppers seemed happy with their loot ... I didn't really have enough time away from the game for that but my instinct was that there weren't that many historical traders (I shall wait til WMMS or use the post).  Great show nonetheless.

I will take some Slingshots and games along to Burton Doubles next week, and to the Bournemouth Armati weekend.  Otherwise, see David and friends at Cavalier or the Shows North crew at Alumwell (WMMS).

*formerly assumed to be Connected with Henry's baggage - but on no evidence from the finds - just accepting the spurious Ambion Hill location for the battlefield makes it a plausible guess.   Correctly identifying the field puts it behind Richard's lines.