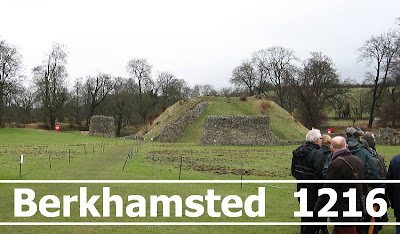 The Siege of Berkhamsted Castle with the Battlefields Trust

Something must have stood at Berkhamsted in 1066 when the Witan decided to meet the bastard duke William of Normandy there, by Roman Akeman Street, and offer him the vacant crown of England.

The Normans very soon built a classic motte and bailey castle, and much of that original structure is evident today in its upgraded but ruined forms.

The original castle and perimeter would have been built out of wood, the stone castle being built by Thomas Beckett in the late 1150s.   As well as being a well frequented royal castle with an attractive deer park, in 1216, Berkhamsted was on the front line in King John's Civil War.

(what was once there: click on it for a bigger view)

The siege of 1216 was the subject of the Battlefields Trust walk ...

England was at war from1215 to 1217 in the aftermath of the signing of Magna Carta.  Many barons clearly intended to hold a reluctant John to the terms that he had been forced to issue.   They turned to Dauphin Louis of France for assistance. 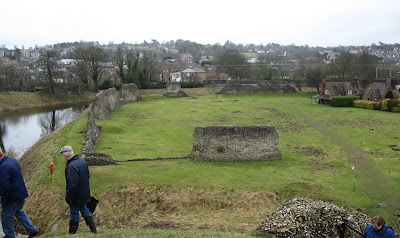 (view of the bailey from atop the motte)

Louis landed in May 1216 and marched on London, where the people and rebel barons proclaimed him King.   Militarily, however, many castles and walled towns held out for John, including Berkhamsted, which Louis besieged in December.

The siege lasted just two weeks before a surrender was ordered - by this stage, King John was dead and William Marshal was endeavouring to broker a peace in favour of the 9 years old Henry III (so it is thought heroically holding on was no longer called for) ... 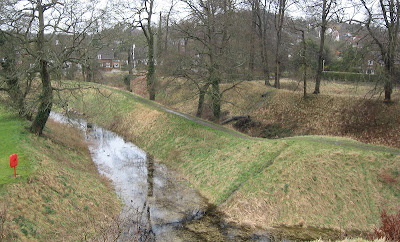 There is a long standing debate concerning the outer earthworks at Berkhamsted (visible in the picture above) ... some holding that they are third line of defences thrown up to keep the attackers off the main ditch and wall ... others that these are actually Louis's siegeworks, pressed hard against the fortress.

The earthworks only exist (or remain ...) to the North and East, and feature seven so-called 'spurs' - 'D'-shaped platforms the rounded part of which face away from the castle.  They are very reminiscent of the plan of projecting towers of course (and to me, at least, have always seemd too close to the walls for it to have been practical for a besieger to have built them in such short order).

You may know better, of course ... 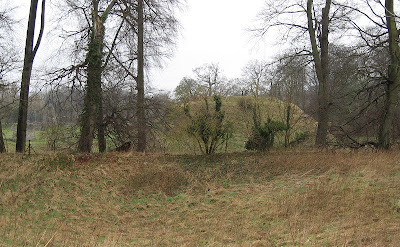 (the motte seen from outside the eastern perimeter)

It is believed that Louis used trebuchets at Berkhamsted - the very latest in continental military engineering ... probably sited on the high ground to the East of the fortress. 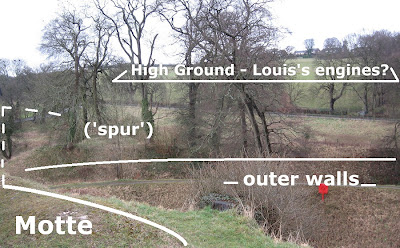 (looking out toward the higher ground)

1216 was Berkhamsted's last military action, but it continued in significant use for several centuries.  Although it is of quite early design, it has a comparatively spacious bailey which was well appointed with fine buildings, and the large moat made it secure enough to hold the captured King Jean II after the battle of Poitiers ... 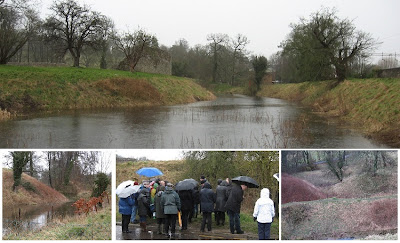 This was something of an exploratory visit by the Battlefields Trust, and very welcome.   It should become part of a 'Magna Carta trail', and, hopefully, visits will become a regular feature by the time of the siege's 800th anniversary in 2016.

Given the horrors of early Spring this year, the walk was well-attended, BFT members combining with local heritage enthusiasts and military historians.

The heavens opened at the appointed hour, and the first phase of our visit battled against a vicious sleet storm - however, the worst of it soon abated and there were occasional windows in which I could get some of these somewhat grey and overcast photographs.

My next outing will be to Alton for a pairs round of the SoA UK DBA League.  See you there.
Posted by SoA Shows North at 10:21 PM

Thanks for the history lesson and vicarious trip. Hope you're able to make more in the future! - James

I spent three years living in Winkwell at Bourne End with the kids off to school in Berko. Berkhamsted Castle was always a favoured stroll when killing time in Berko.

Suddenly a pang of homesickness for 'ertforshire whilst sat here in the warmth of Singapore.

Thanks for the comments ...

Thomo, I know Winkwell very well and have spent many a summer's evening in my youth enjoying a beer or two outside the Three Horseshoes ...

There can't be too many of you in Singapore with memories of a little hamlet beside the Grand Union Canal!

Don't get too homesick ... We are in the grip of perpetual winter here, so you are better off in the warmth of Southeast Asia, mate :)

Ah, yes - the Three Horseshoes. You know the row of terraces across from the pub? We owned the one closest to the overflow car park. Built in 1815 (the terraces) and I still have the scars in my forehead from the low beams across the doorways.

Had a few lock-ins at the Three Horseshoes.

Oh - and us locals referred to it as the "Grand Junction Canal" :-)

The swing bridge had a sign threatening you with a 10 shilling fine should you use the bridge inappropriately.

Have parked outside your house on numerous occasions, then ... well I never!