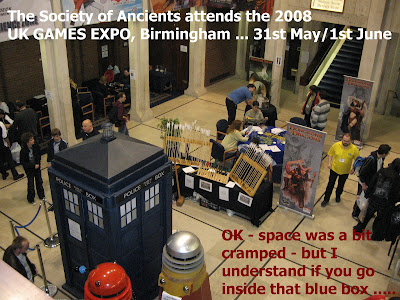 OK ... I know - no ancients content in that photo at all - I just wanted to give you a feel for the event. This was not a regular wargames event - but a more general games fair ... so although, amongst the magic, dragon chasing, and gangster cleansings, a FoG event was being played (and Flames of War on the Sunday ...), the venue was full of families, suited-up roleplayers and self-confessing boardgame geeks ... not quite the general public we meet at Milton Keynes - but still a refreshingly diverse mix of people who don't yet know they want to play historical ancients! Edgebaston's extensive Clarendon Suites are the elegant venue for this sprawling event: lots of rooms, lots of traders, lots of demo tables and even more visitors... 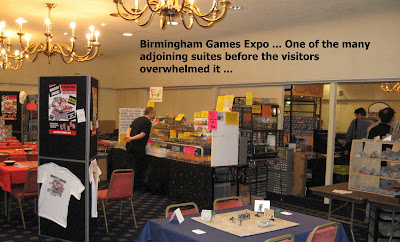 So not a lot of space left over. This was our first visit to the Expo, and very much an exploratory outing. The organisers had provided us with an 'information' stand ... so somewhere on which to lay out Slingshots and games (the guts of what the Society of Ancients does ...) but no linked gaming or demonstrating table (which was OK, as, forewarned, I was covering the event solo..).. 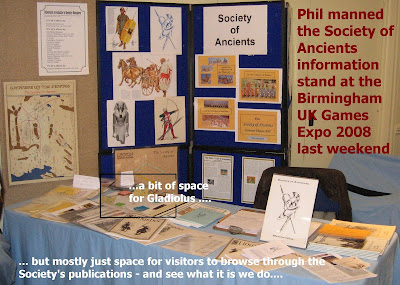 The Expo is very much about playing, and joining in. The organisers' preferred style is for rooms centred around games to try out, with trade and information stands surrounding them - preferably sponsoring the tables in front, and selling the games being hosted on them (so the show is like a vast 'try it and buy it' bazaar...): so, a great idea, though not a model that exactly matches a non-commercial association like the Society of Ancients. Needless to say, I would have loved to have been able to set up the full 'Shows North' participation version of Gladiolus, and I think it would have gone down very well. 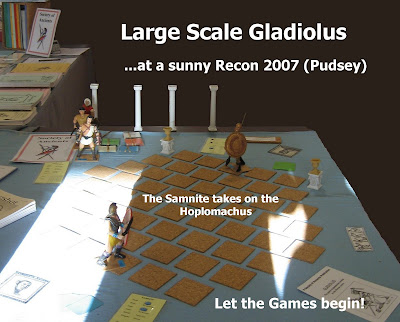 Remember them? They certainly draw visitors in.... They take 4' x 4', though - not an option, even if I'd had them! Fortunately, as well as 'the big fellas' I have some 15mm Gladiators (which, of course, actually fit on the board that comes in the Society Game Pack ...).. 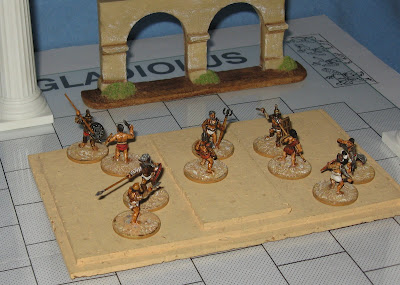 These allow a Gladiolus game to go almost anywhere - and so I was able to set something up, and show interested browsers how the game works. Of course, I'm a big fan of the 15mm scale - and even though they are small, I still think they look OK...

Good enough to merit a few gratuitous photos, anyway. Gladiators are such a great subject for pictures ... For those of you that are bound to ask, I think these were a mixture of Museum Miniatures and Outpost(?) ...

... then mucked about a bit by me so the equipment is a reasonable match to the descriptions designer Andy Gittins gives for the (6) specific gladiators built into the game (but its a while since I did them). For 15mm figures, I think they have photographed up nicely ... 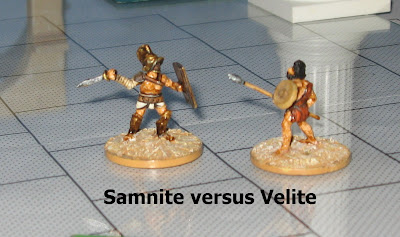 The Expo? an enjoyable weekend, and the Society's range of games proved very popular. I think sometimes we don't make a big enough play of the diverse selection of games written by our members and published by the Society of Ancients over the last 15 years: from these Gladiators to the Medieval Tournament, from Ancient naval battles in 'Corvus' to the re-issue of Paddy Griffith's rampaging 'Aquitaine' ... and in the middle? Dynastic politics, Dark Age skirmishes, battles for the lordship of the Steppes, and the innovation of Graham D Evans and the De Matrica Bellae 'matrix' game. Oh, yes ... and more gladiators ...
You can get all of these from the Society - they are listed in Slingshot, and Peter tells me the shopping option for them will soon be up on the website - but I'm wondering if here, or somewhere like it, isn't where you should 'find out more ...' I'll see if we can't get a bit more supporting material up somewhere ... the games are such a great resource.

The Expo? yes - I hope they will invite us back next year, and I hope we can play a fuller part. I understand the Field of Glory mini tournament went well - so perhaps there will be more of an ancient/historical flavour in the vibrant mix, next year.

Thanks, everyone
(for more on the UK Games Expo ... click here)
Posted by SoA Shows North at 9:08 PM

The photos do indeed give a flavour of the event- most evocative of a sense of gaming enthusiasm.
I thought the Society stand was really interesting looking and well presented- sure to attract visitors.
The gladiator game looks fun and I can well see why people stopped to watch.
Thank you gentlemen for a most enjoyable blog entry.
best wishes
Alan

Just discovered this blog. Nice Gladiators, guys. What about 28mm? Does anyone make decent 28mm Gladiators? I guess figure scale is almost irrelevant when so few of them are involved. Neat photos.

Thanks for the positive comments.

Ash: I'm trying to get motivated re 28mm... like many 40 somethings, I started with airfix plastics, and traditional 25mm metals.

I generally dislike today's 28mm - the figures are usually ugly and clumsily sculpted (all 'feet, fists and helmets') and scale-wise don't really fit a purpose ... if you want mass, 15s work best .. if you want individuality, go to 54mm for starters...

As a collector, I actually want some modern 28s in my collection - but it's hard to identify a project for which the scale is ideal. Probably, the answer is back where I started ... Hoplite Phalanxes!