Where have we been since Partizan?Sorry to regular visitors for the uncharacteristic gap in posting - work and other issues have meant a few items have backed up a bit. Well here goes - lets get caught up...
Colours 2008
September always brings the prospect of a pleasant day out at Newbury Racecourse - now the long established home of Colours. It always seems to be a sunny day - and the big windows characteristic of these racecourse venues flood the exhibition spaces with light. Vapnartak is similar. Sometimes this is a disadvantage - especially if you are too near the windows ... but I, for one, would much prefer plenty of natural sunshine to the dismal corners one gets in some pokier spaces. Nice turn out this year, and plenty of good games around - photogenic too. 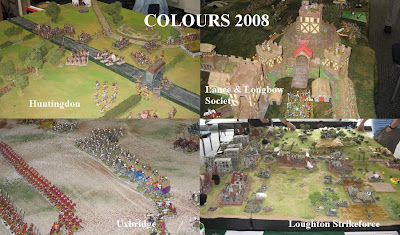 my 'postcard from colours'

Colours is a two day show, and we usually have the 'A team' - Philip Sabin with something from Strategos or Lost Battles and the impressive Eric Cruttenden 28mm collection (see the entry for Salute, e.g.) to give it shape and figure appeal - on saturday, with Shows North taking over on Sunday. This year, we had a bit of a manpower issue, so I went on both days ... manning the stand on Saturday, putting on Welcome to Jerusalem on the Sunday. A bit of a strain, time-wise, but a great weekend ... affording time both to meet people and work on the project. Most of the significant historians and wargames personality of the age were calling in on the Society stand on Saturday, so it was an interesting place to be all day (and if the promises I managed to extract on behalf of our august journal are redeemed, Slingshot will have some good reading coming up!). 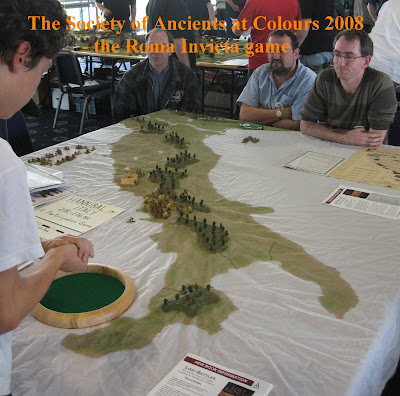 In a very impressive last minute revision, Philip Sabin presented a scaled up version of the new Society game - Roma Invicta ... 6' x 6' of relief map, with 10mm figures replacing the counters used in the standard game. The vast map was created, Phil tells me, following the 'artroom' tradition of fixing the sheet up on the wall, then painting in over an image projected onto it. The effect was them enhanced by building up the back to raise up the contours. Very impressive.

The game was virtually the same as that issued out earlier this year, just everything boosted up. Clearly the way to present a boardgame at a public show - and it attracted a lot of visitors and favourable comment. Good show, and a worthy variation on our usual displays, I think.

The map follows that issued with the game. Troop counters were
replaced with 10mm figures (1: 1,000 horsemen/2,000 foot)

Sunday
Sunday saw the Shows North team take over, and the up-dated 'Welcome to Jerusalem' game back up to full size. A quieter day, as usual, on the Sunday - but a good chance to play through what we had learnt from the Partizan experiment and put the full display together. 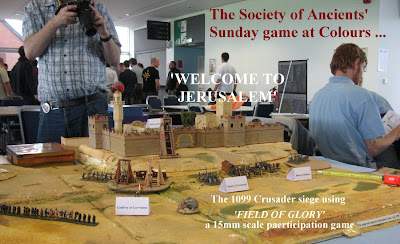 The key zone, of course, is the area around the walls, within range, through which the assault parties will move. The garrison needs space to move about inside the city - and some rules for doing this, too ... but outside, and beyond the range of the defenders, the space is very much decorative (and/or available for game components, charts etc.)... As the defenders aren't really going anywhere, there is very little point forming any assault parties up outside shooting range. And it is probably not that realistic either (although they would obviously move up from the camp or whatever, the point at which they would form up for combat would probably be as they come into range of shooters on the walls). This will need to be a deployment feature of any full 'siege system' for FoG. And probably in an ambush variant also (so that surprise attacks can be launched). More anon. 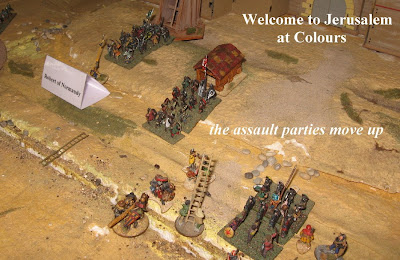 In 1099, of course, the surprise assault failed. The main attack centred on two mobile towers, one - under the control of Raymond of St Giles threatening the southern approaches - the other, featured in our game, attacking the north east corner. Raymond's tower was burnt by incendiaries, and abandonned. The northern attack was under the leadership of Godfrey de Bouillon. Although his tower was also on fire, it was close enough to the walls for the troops to gain the battlements. As in the game we played at Colours, the successor failure of the incendiary weapons will be critical to the outcome. History seems to give us a tantalising 50/50! 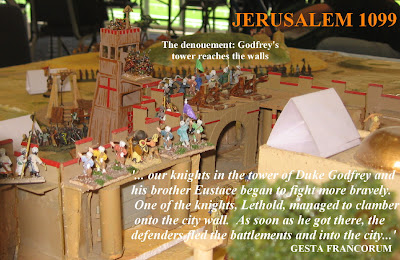 Will had taken Godfrey's role, and the tower -largely undamaged - duly gave forth its complement of assault troops. The results were not good for the wavering Fatimid defenders. They were put to the sword, and the Crusaders flooded into the city. Elsewhere, the ladder parties were struggling to get a foothold - but the collapses elsewhere undermined the resolve all round.

Many thanks to John Curry and Matthew Bennett for important contributions, and to the players for helping us move the project on.

Next time out will be at Derby.