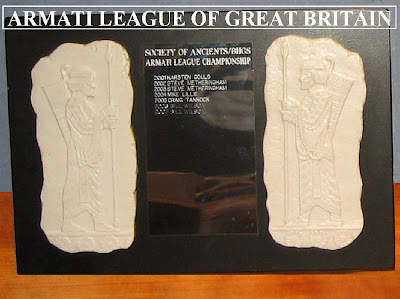 Glasgow Armati - the Phil Rodgers Trophy
... and the Armati League's annual 'end of season' get together in Glasgow.

For those unaware, the Armati League formula is of several rounds which are 'open' (limited by period, but the player chooses and takes his/her own army, including bought and obligatory terrain features .. and the game is played per the set up rules etc. in the book), and several (popularly styled) 'scenario' rounds (where the table and/or army may be fixed and allocated by lot). Traditionally, the last event of the year is in downtown Glasgow a few weeks before Christmas. 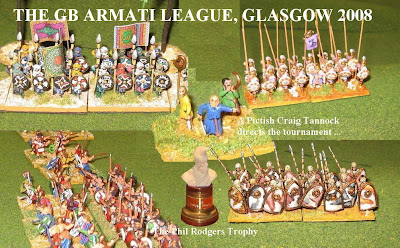 At Glasgow, all the tables have terrain preset, and a matched pair of armies are given. In some cases these mirror historical battles, in others, they are appropriate antagonists (say Egyptians and Hittites) but not meant to reflect any particular battle. In some cases the scenario designer will have taken the opportunity to correct little glitches in the army lists, and any such changes will be noted down on the printed sheets which come with the forces. Terrain also might be tweaked (so, the large Sphinx in the armies photo proudly sat as an impassable area in the middle of the Egyptian table - and had a challenging effect on the game, too) ... 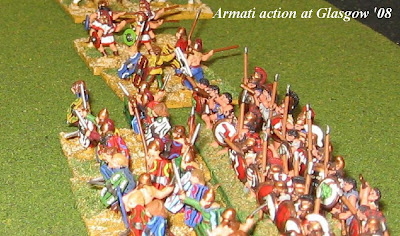 The reasoning is many fold. A lot of players do have to travel some distance to Glasgow, including by plane. The system allows the home players to provide all the kit - so visitors just need to get to the hotel with their overnight bags. Nice and simple. The preset terrain, of course, allows for quick start ups (so you ought to be able to get lots of games in), and it is easier to doff a cap to history (and put a cap on gamesmanship?) by providing both sides in the game (and allegedly playtesting it so the encounter is known to be evenly balanced). I use the words 'ought' and 'allegedly' etc. because it is by now a time-honoured Glasgow tradition to question the balance of any and all of the games ...

Personally, I do prefer preset terrain for all tournament circumstances as it precludes players turning up with 'cheesy' terrain pieces, it gets games going quickly, and - in my opinion - it sets a more authentic challenge (take the battlefield as it is and the army that you've got ...) ... That said, the terrain on the tables has got to be reasonable, given the armies. And on that point opinions will always differ. 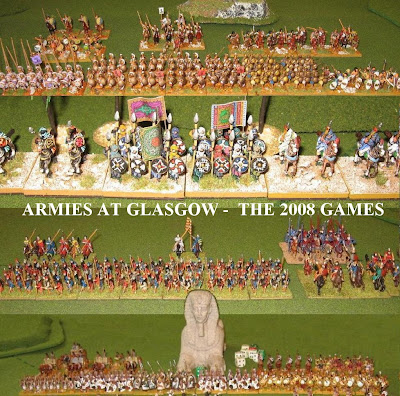 Games are allocated by drawing a coin marked with the table number out of a bag, then flipping it to see who gets which side (and a few sub rules to minimise players getting the same game/army a second time round) ... In the past there has been a joker system where players could 'avoid' certain draws by playing their joker and going to the bag again. Great idea. Didn't get used in 2009. The advantage of the joker system is that it enables a player to avoid games that are felt to be unbalanced or which (e.g. me, previously, with Samurai 'civil wars') they don't feel offer a satisfactory game under the rules. Overall, a great effort was put on by Glasgow Phoenix, and most of the games were pretty good matches. The armies were generally well thought out, and (see the accompanying photos) the presentation standards were great. 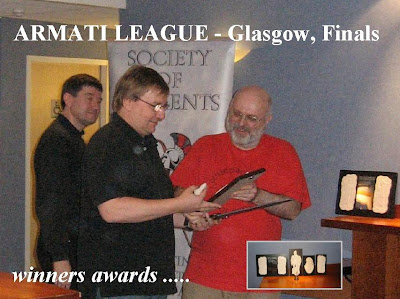 Prominent traditional 'end of season' features of the Glasgow event are the additional awards made by the hosts to their various visitors - once an attempt to share out the prizes this has become something of a ritual mocking of regular players and their likes and dislikes ... much to the entertainment of all. 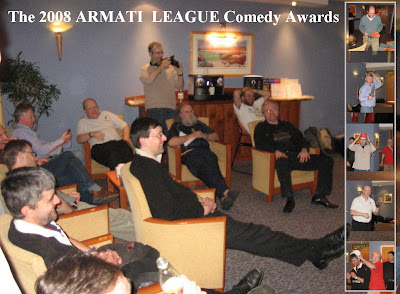 There usually then follows a 'parlement' of the 'League' players to fix the general pattern and provisions for the following year (a clearing house and planning session). Sadly, one supposes due to the waning status of the game, the parlement was called off. Ah well, I suspect this will have been my last Glasgow Armati weekend anyway. The idea, the club and the personalities are great, but the rules are overdue for reform and the game has drifted from what it was in the early days of the league.

Nevertheless, thanks for a great weekend and an ideal build up to Christmas ... Best of luck to everyone. I hope the Society of Ancients continues to support the Armati League.
Posted by SoA Shows North at 2:18 AM