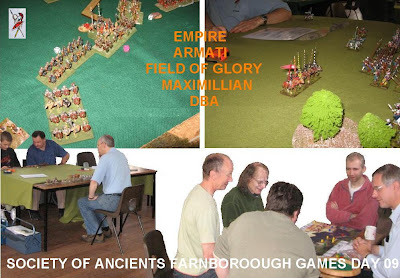 Sunday saw the first Society of Ancients gathering without an AGM - just a Games Day ... and an opportunity to meet the Committee. There weren't that many of us there, but this was a first toe in the water - and I guess it meant less hosting and more games playing for the Committee.

We had a 2000 anniversary game of Teutoburger Wald ... a long sorry march through the forests for Varus and his men. This was an impressive scenario modified Armati presentation in 15mm 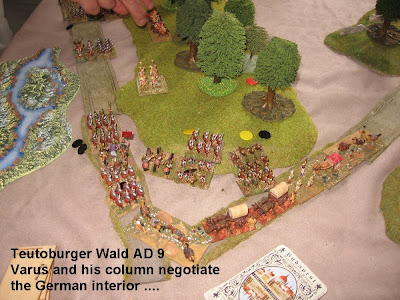 In addition, there were try out games and Championship games. As well as spectating the occasional progress of Varus and his men, I got to try out Empire ... which I can highly recommend (it genuinely is quick to learn and seems to harness some of the global dynamics of the BC Imperial periods quite cleverly ... anyway, thumbs up to that ...) ... and I had a Championship game against Daivid Barnsdale (my Romans v his Carthaginians) ...

This was the Society of Ancients Championship 'reborn', of course - so I couldn't do anything quite so churlish as use the right Romans to face the threat from Africa - so, in fact, 2nd Edition Armati, Carthage Resurgent (WF)* fought Aurelianic Roman (A2)*

It proved a tightly fought affair ... Daivid learning Armati as he went, me paying insufficient attention to my own army as I explained to him the nuances of his! I had the legionaries deployed wide (their more vulnerable formation confronted by Hannibal's warbands ..) .. and only just survived the onslaught (with the lost of one eagle ...)... The game turned on a cavalry melee area. 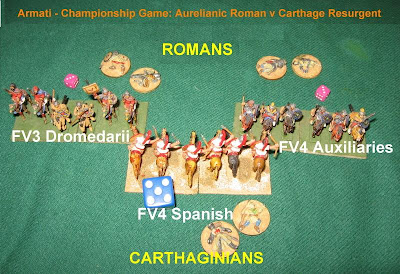 Armati cognoscenti may recognise three mounted units here, all one BP off being broken (that means whoever loses next time is removed ... draws will not count as mutual destruction does not happen. The Spanish must fight each Roman unit individually - and have not been 'spooked' by the camels ...) .. And yes, if the Carthaginian breaks both Roman units Hannibal wins .. if the Spanish break, Hannibal loses. Ignore the little dice (they mark three fatigues per unit .. so everyone is tired!). The big blue die is the Carthaginians rolling a very powerful 5! The Roman Auxiliary cavalry fight first .. a 6 wins the game, a 5 squares the melee, a 4 sees them break and leaves the Spanish odds on to see off the Camels next turn to win the game. They roll a 5! The Camels fight next and must roll a 6 to square the melee and survive another turn - they are 1 FV down, so are in a 'no win situation' against a 5.

OK, I'll move on - the Camels roll a 6, so the whole melee goes another round ... and the Auxiliaries rout the Spanish and the Romans win the battle. Meanwhile, events elsewhere really did mean the Carthaginians did have to break both units in this melee to win the game (and didn't have much time to do it, either) ...

Excellent game, and a Championship win for the Romans. Ken Cooper took over my Romans for another bash, and deployed the Roman infantry deep to resist warband... a much more productive arrangement, even though (another newcomer to the rules) he did it without understanding the full implications... Fortuitously the (now overmatched) Celts were deployed directly to the Legionaries' front and got some very nasty treatment. The Romans dealt with their foes more methodically this time.

That said, I thought Carthage resurgent a better treatment of Hannibal's army than the A2 list (but that's a digression I hope the general reader will forgive) ... 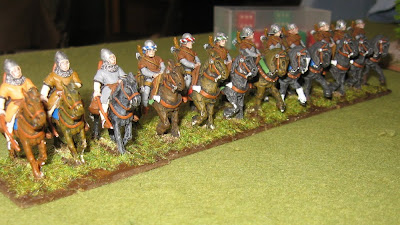 Elsewhere I saw games of Field of Glory, Command and Colours and Maximilian, I think .. as well as Phil's Empire participation table which ran pretty much all day. Please give me a shout if there is something played this year which I have missed off.

As I said above, this is 'year one' for SoA moving on from an AGM based event to a general member invitational event or events, and was quite low key. It is a good base from which to start, and I hope more will come of this in future years. we are by no means restricted to a single event nor to the South of England ... so if you want a Society of Ancients member event in your region/country, think about how you would go about organising one and get in touch with the Committee.


Oh! ... and don't forget those Society of Ancients Championship games ... 3 more months to go, so get some games played and send results in to Bill - he's dying to hear from you! 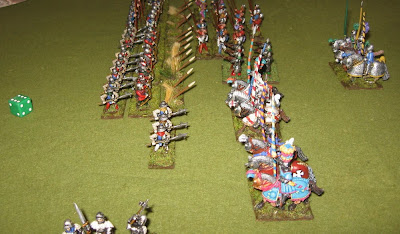 * ... in parentheses, 'WF' signifies the list drawn upon one available free from Warflute, 'A2' signifies one printed in Armati 2nd edition lists section.
Posted by SoA Shows North at 10:50 AM