Thanks to Dave Lanchester of the Lance & Longbow Society for the admin at this show (we corner a little shared zone between SoA, L&L, DL books and a game which we hope suits both Lance and Longbow and ourselves). It seems to work. 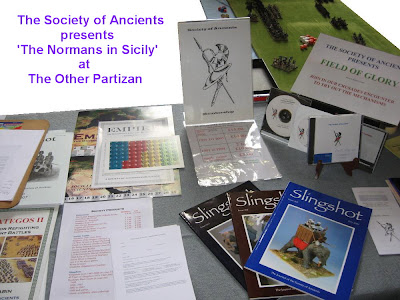 Chris put together a little FoG number - a 'quick to contact' action from the Norman conquest of Sicily (maybe he'll post in with a little extra info on the historical background to this engagement): caught near a river, the Moors have little choice but to fight it out, and hope their numbers will count. I believe the forces were about 400 FoG points per side. 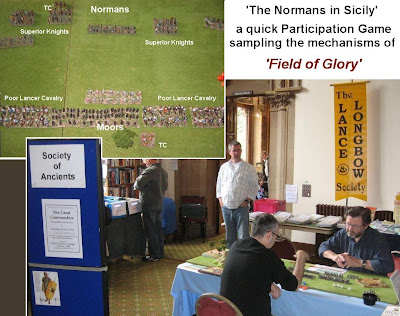 (Chris sacrifices his Moors to the greater good)

The action only takes about 45 mins. The Moors don't really have room to exploit their better manoeuvrability, the Normans steam in. The gamette quickly shows how FoG's combat and morale systems work (especially how to do the dice allocations and combat poas) ... the visitor, as the Normans, wins ... and enjoys having stopped off with the Society of Ancients. Everyone's a winner. Actually, that was pretty much how it turned out. Although the game was necessarily one-sided, what it did well was to show the mechanisms by which quality will overcome quantity in this game system (provided the quality - which in this case was close combat quality - can get to grips with the more numerous enemy ... which catching them against the river ensured). 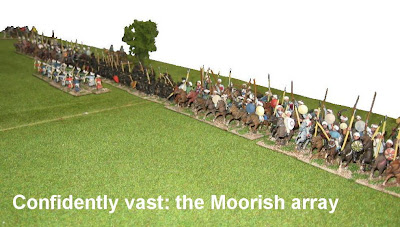 There were a lot of Ancient and Medieval games at Partizan again. Many Warhammer/Warmaster in flavour. In the same room as us, the Forest Outlaw wargamers from Mansfield were playing a Hastings scenario using a tweaked version of Neil Thomas's rules. As the SoA team also uses AMW, I thought I'd explain the little difference here. Looking to add in few more variables to an encounter where one side pretty much stays still, the game featured a card based activation sequence. 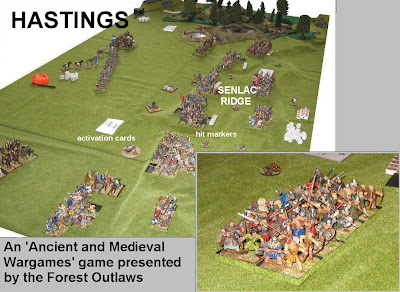 Instead of each side taking a turn, then all that side's units shoot, then everyone melees ... each unit had a card, and when that card came out, the unit took a turn, did its shooting or melee etc. Obviously if two consecutive cards were the opposing units in a combat, you would end up with two turns of melee happening before anything else around them. And so forth - I'm sure you get the picture. It did seem to inject a fair amount of unpredictability without changing any of the elegant basics in the game. I don't know if they had a 'Turn End' card in the deck (the way Graham Evans usually would with a card activation deck) ... An intriguing and simple method, I think this is an idea worth having a look at.

I also enjoyed the Ottoman siege of Belgrade hex-based game (I'm tempted to say 'featuring a cast of thousands' see photos) .. so many figures I thought it must be Warmaster ... Actually it was based on the fantasy set Hordes and Heroes, which you can get for free from the Kallistra website (rules page here ...) 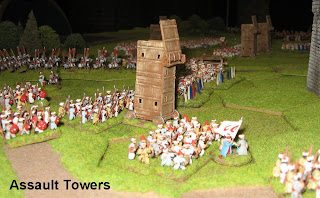 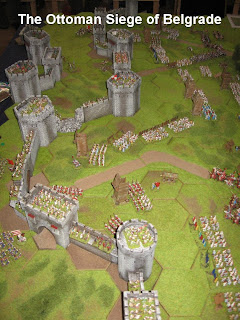 PICTURES OF SOME OTHER STUFF AT THE SHOW.

All show games can be made more eye catching by the addition of something big. Partizan can do big and eye catching. We always like architecture 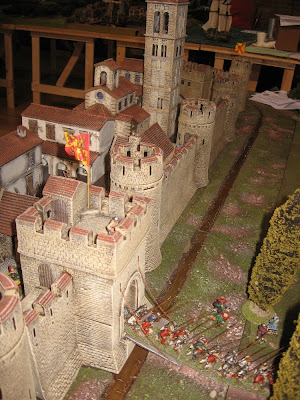 (city scapes from the 28mm Pavia game at the other Partizan)

And even if the period isn't quite right for the Society of Ancients Shows North blog, we like armoured trains .... 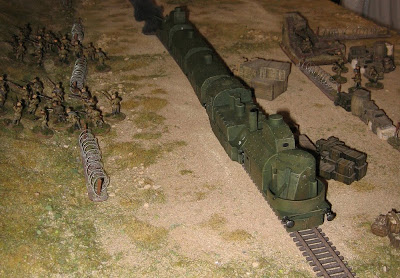 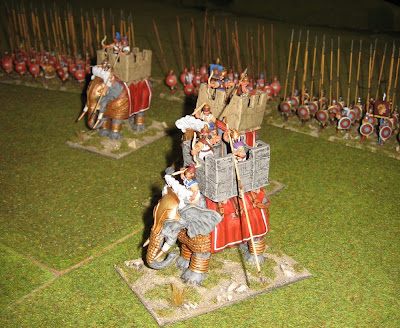 (1st Corps game of Magnesia, captured at The Other Partizan)

So, quite a lot of things to see and do at Partizan - and some interesting ideas on show even for regulars like me. Lots of trade, of course, and a rewarding show to browse. Shhh! ... Don't tell anyone, but this is in the East Midlands, too (so you can add free parking, friendly people and 'simple but affordable' catering into the mix as well ...)...

No need to wait til next Partizan to see us of course ...

Next outings are Colours at Newbury Racecourse
Saturday will feature a Lost battle hosted by Philip Sabin ...
Sunday a Medieval Siege hosted by John Curry ...

The Society of Ancients Open day will be at Elles Hall, Farnborough on the 20th ...

And the next Shows North outing will be Derby, where Graham D. Evans will be inviting visitors to have a go at Neil Thomas's Ancient and Medieval Warfare (AMW) as Alexander the Great.
Posted by SoA Shows North at 1:36 PM