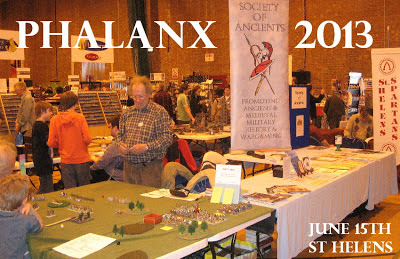 A good turn out from the wargames Societies saw SoA, Pike & Shot and the Lance & Longbow all pitching in for Phalanx ... for us, that meant Martin C. and his 'Dirty DBA Challenge'.

Staying over in Salford also meant a comfortably early arrival and time for a bacon barm, HP sauce and a strong black coffee.  I appreciate blog aficionados need to know these things.   The Sutton Leisure Centre Café is notoriously unhurried but does offer Northern prices ...

'Dirty', of course, as in the expression 'quick and dirty', so an even simpler approach than orthodox DBA.    This year the challenge was to beat the Persians - with a number of historical (and some more generic) opponents.   In a number of entertaining tussles, most failed. 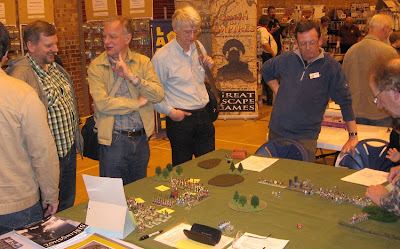 From the familiar mix, I enjoyed, in particular, the Classical Indian box gambit.   It worked better than I expected and was one of a number of games that saw us busy for much of the day.

More 25mm over at the Lance & Longbow's stand ... where they refought the Battle of Deepdale - which I understand was the climax of the 1315 Banastre Rebellion using modified Warhammer Ancient Battles.   I'm no expect on this sort of thing but am happy to hand over to Wargames Amateur (who has some of the heraldry up, too) 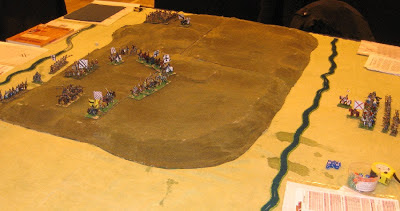 (Lance & Longbow do the Banastre Rebellion)

Also of interest to ancients enthusiasts, there were a few games played in the Gladiatorial arena (I understand the 'colosseum' was home made), and the Liverpool Wargames Association had a great DBA Romans and Celts game (which looked to me a bit like Boudicca's last battle) 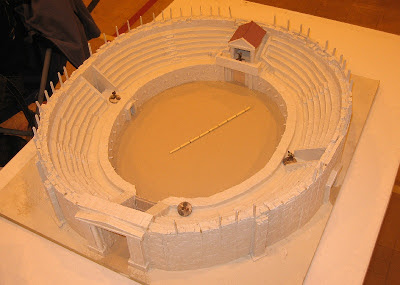 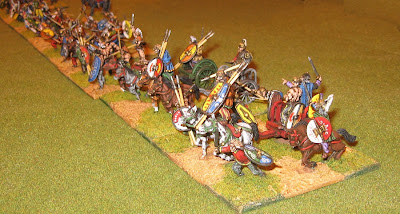 I liked the extra large bases that have been employed here (100mm IIRC) which just gives the 12 element forces an extra chunky look.  Worked well, and together with the SoA games meant newcomers had some helpful stuff to look at.

Out of our period, I was impressed as ever by the big East Lancashire club's 15mm Renaissance table ... 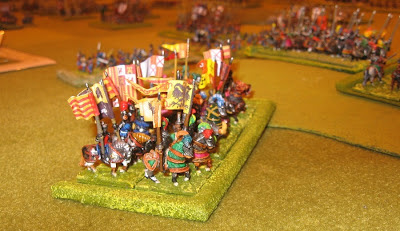 ﻿
... there was a very convincing Battle of Cross Keys by the Stoke Challenge lads

... the Pike & Shot Society showed off some nicely turned out Baccus ECW Scots 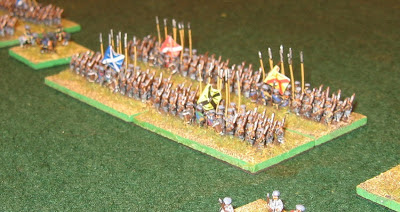 ... and there was an excellent Napoleonic display by Garry Wills promoting his book on the 1794 campaign in the Netherlands (more on the Caseshot blog) ... 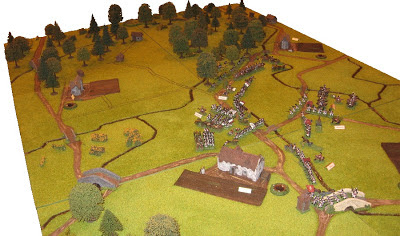 (worth clicking this one for the larger version) 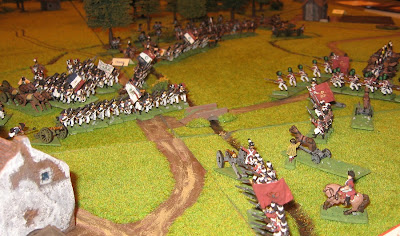 (detail of the excellent Napoleonic table)

I did a spell on the Pike & Shot Society stand, had a chat to some of the other exhibitors and hardly had time to visit the busy Bring & Buy (where apparently large quantities of books changed hands at bargain prices) ... The day had passed very quickly and we were soon onto take down duties.

Phalanx ticks all the necessary boxes and seemed quite busy this year.   All in all a great little show, and worth queueing up for the canteen.

I will be at Naseby next weekend and then at COW and the Stoke Challenge. 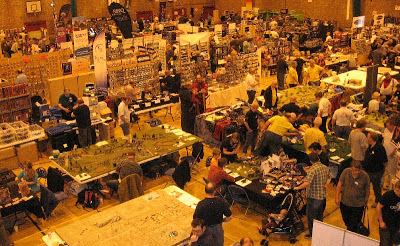 ('all in all a great little show')

On Sunday we had a big ECW game at Steve's

Hello, thank you for your kind words regarding my game "Wellington's First Battle". There are more photos on my blog at http://www.caseshotpublishing.com/wellingtons-first-battle-wins-best-in-show-at-phalanx-2013/

No problem, Garry ... Good looking game (glad it got the recognition) - your son, I think it was, who explained one or two of the details to me as you were already engaged.

I will edit the blog address into the post so it comes up as a link ...