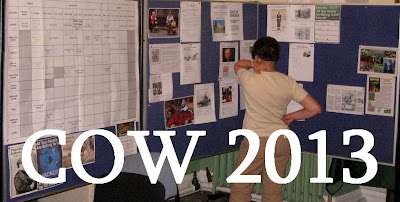 The Conference of Wargamers 2013

This year's COW fell into three parts ... the - now, annual - Friday afternoon excursion (this year to the Harrington Aviation Museum) ... the sessions I hosted (9:00 am each morning, so keeping me disciplined over the weekend) ... and the sessions I attended (which were fewer this year as I had sessions to prep) ...

Friday
After the visit to Harrington, I led an impromptu expedition to the nuclear missile pads on the old airfield.  These are now listed by English Heritage, but at the moment access is possible provided you respect the countryside and stick to the tracks.   Whether they end up 'visitor friendly' or fenced off remains to be seen, now that the ruins are officially recognised.

(Harrington site ... Aviation Museum - the A14 now runs between it and the nearer road on the map - and Cold War relics which are on the old runway) 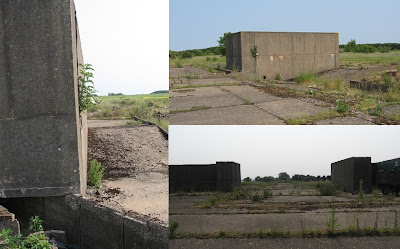 (Cold War relics: some shots of launch pad one)

Later Friday I rejoined the Conference and got in an entertaining game of Ten Rounds Rapid (the WDDTN shows game ... I suspect your next opportunity to play this will be The Other Partisan) ... after which I finished the evening setting up for Newbury.

Saturday
9:00 am Newbury II 1644 - a compact wargame of the battle using modified Armati.

I think this session worked well.  I am always conscious of the time, so didn't give an extensive introduction either to the battle or the rules (but relied on active umpiring and  'picking it up as you go' to get people playing) ..

(ECW Armati ... the small ruler prominent in the shot)

Timetabling at COW allows single or double sessions, and I find, with an efficient game like Armati as my template, I can fit an ECW battle into the 2 hour slot after breakfast ... as long as I push it along.

The alternative - taking half a day - is unthinkable.  We had 5 players and over 30 units in play but reached the point where Waller's army broke off, and the King was testing to break by the time darkness ended the engagement inconclusively - which is pretty much what happened in 1644. 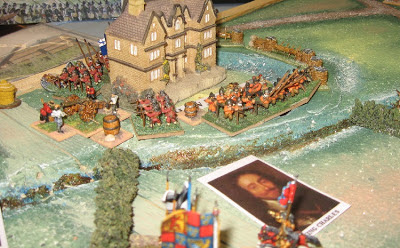 Lord Goring dealt much more aggressively with Cromwell than in 1644, but fell in the fighting.  Balfour broke into the back gardens along the flank of the Kennet water-meadows (but was too badly mauled to force an advantage from the position) and Manchester's second wave broke into Shaw House and captured some of the King's guns (had this happened earlier in the day it would have unlocked the position).

We used the intro scale ruler with full width units as is standard for me now with compact historical battles.   Armati has the best combat system for this period, but (as ever with realistic terrain and built over templates) don't get too fussy about who fits where (it's a built over area - of course they won't quite fit ... but that is why they don't fight on their full FV) 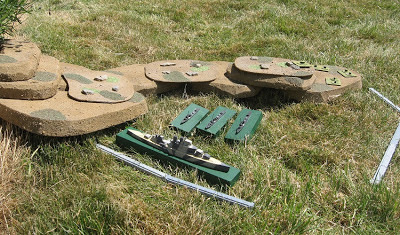 (Fletcher Pratt ... my flotilla of destroyers lies alongside Renown in Gib)

An outdoor recreation of the French attempt to rush the straits of Gibraltar.   The grass had been cut a little roughly making for a choppy sea to measure over.   The umpiring team did a great job adjudicating gunnery and torpedoes and the French were ultimately turned back. 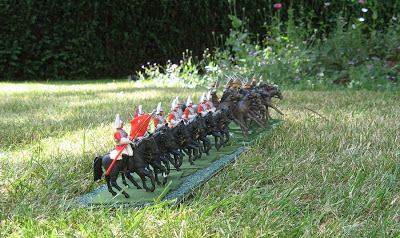 Also on grass, the Little Garden Game pitted toy soldier against toy soldier as 50 year old Britains took on more modern 1:32 boxed plastics in imagi-nation gunboats with matchstick ammunition.    There is an intriguing mix of qualities in this nostalgic whimsy, which, despite its obvious appeal, still doesn't quite work for me ...

Saturday also saw a session about the challenges of wargaming (and history) in an age of faith, in this case looking particularly at Lepanto, and then I assisted John (History of Wargaming Project) Curry demonstrate an early 'limited awareness' skirmish wargame for the WWII period. 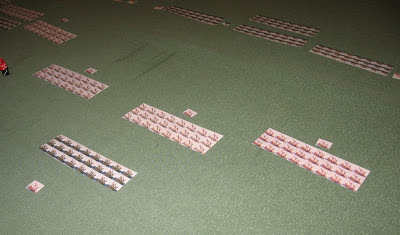 (a very basic Lepanto downloaded to help us think ... what would we do?) 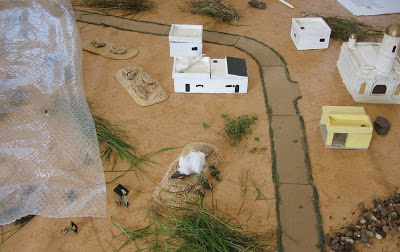 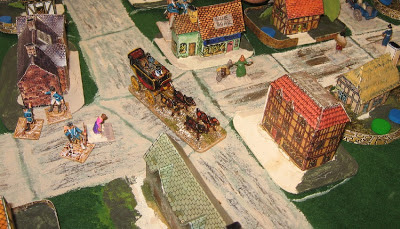 (for more on the Stage Coach in Sue's Gentlemen Go By, see the FoGBlog entry)

... and I sat in on an experimental Napoleonic game in which the (multiple) players gave sequential tactical orders to battalions which were then moved on a map table by the umpire.   It did what it did very well, and it is intriguing to wonder how it can develop. 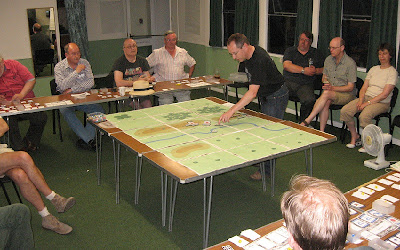 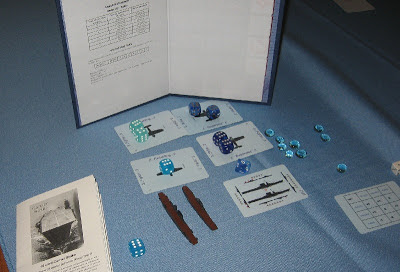 Well, it's challenging to give a fair impression of the variety and originality of a day at COW in just a few pictures and captions, but after all that, I finished the day running a few games of the Bosworth DBA participation game. 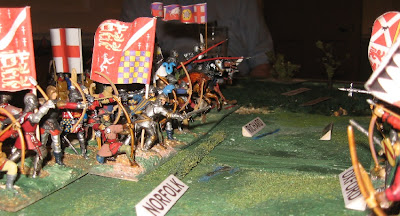 (Bosworth: the tension rises as the battle lines approach)

I had the Lounge booked for a Sunday morning talk on the Wars of the Roses and search for Bosworth battlefield which would end with a play-through of the game based upon the new information.   Aware that the game could accommodate fewer than the talk I decided it was best to get the game set up the night before and finish the day running 'preview' games.   It seemed to work very well.

In the morning session I presented some of the archaeological evidence that has informed the new identification of Bosworth battlefield and generally presented the story of the campaign, its causes and consequences. 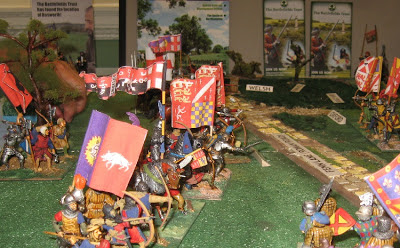 As a real treat, we were able to finish the well-attended session with two players who had not played DBA before (yes there are still plenty out there) testing out the reconstruction.  It was a tight game which I think brought out a number of important features of the narrative.   Henry won it.   Just.

Talking to Phil Barker over lunch, he pointed out to me that he now considers that Henry should probably only be rated as a Cavalry element in this battle (not as a Knight) as he showed none of Richard's eagerness for combat.

Funnily enough, I thought that when I designed the scenario - but kind of thought the DBA community would just not wear a Cav Gen for an English medieval army ...  But I think I will amend the lists accordingly (and see if there are any unexpected negative results from the recasting) ... 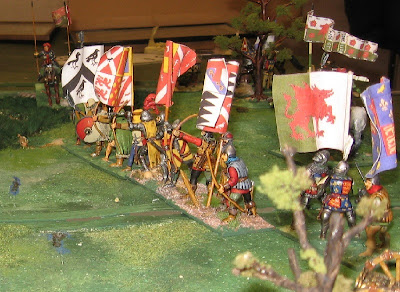 I finished up COW with a mixture of sunny socialising and indoor chat: there were more games going on but the only proper session I did was listening to John Curry's Random Tales.

Many of you will know John's History of Wargaming Project, in the course of which he has interviewed Don Featherstone, edited some of Paddy Griffiths's papers, republished lost books and collated disparate scraps.   Random Tales was a look under the sorts of stones that perhaps should never have been lifted.  Fascinating but probably actionable.

COW is one of the best, most varied and most compelling weekend events on the UK calendar.   If you like what I like.

You will be able to see Newbury at the Stoke Challenge, and Bosworth should feature on the Battlefields Trust stand at English Heritage's History Live event (Kelmarsh Hall). 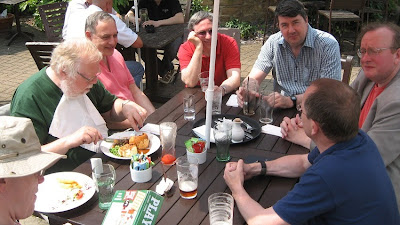 (COW 2013 ... summertime: a lot of the weekend looked like this scene from the Harrington meet)
Posted by SoA Shows North at 9:16 PM