A slightly delayed report pending the scores in this friendly Sunday series.   The scores took a while to come up as the SoA team in the FoG-AM (that'd be me, then ...) messed up their score sheet in the first round.

We used my still quite successful Feudal Aragonese, and, after sorting things out, we came 2nd with a decisive win inside the time limit and a score draw (marginally against us). 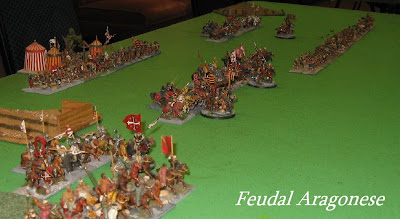 This is the same army we won the Halifax round with in 2011, so it certainly seems to suit us, it wins over half its games and doesn't seem too badly affected by V2 syndrome.

Javelin armed skirmishers still seem hard done by (but they are cheap, which means an army without any 'poor' and with plenty of knights still tallies up with 16 units) ... but are not affected by the reduction of ranges - so they are relatively better off, now, compared with bows or slings.

The knights are armoured, not heavily armoured and benefit from a (V2) bonus of +1 MU, so move like cavalry.  This is a real improvement and makes the feel much better (these are Spanish Caballeros, not clumsy French tin cans*) ... 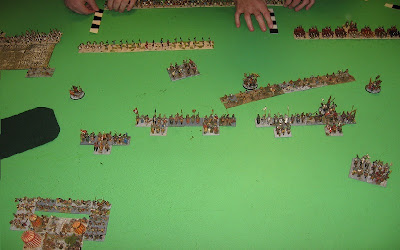 (Game One: vs Carthaginians)

Of course, who you play against will make a big difference ... against the popular big infantry hulks you are probably heading for a draw ... but at Derby - which is an open event - we got drawn, out of period, against a Carthaginian with plenty of horse and medium foot ... and, in period, against Italo-Norman. 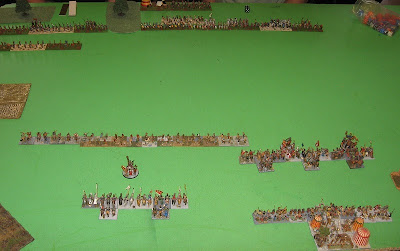 We got lucky against a very game Carthaginian (getting lucky is a familiar theme amongst my tales of victory).   And it was a joy to to get a historical match against the Normans ... though the luck bug bit us back in the last turn there.

The heavy cavalry are pretty much the same ... the Normans had more spearmen, whereas we had the advantage in javelin skirmishers.   As the spearmen come in big lumps, we also had a couple more units.

A very friendly 2 game/one day competition.   Might be our last year as i still don't expect to play much FoG next year ...

(skirmishers go before the King of Aragon and his feudal host) 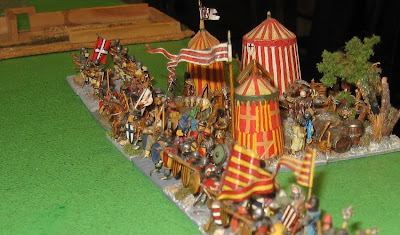 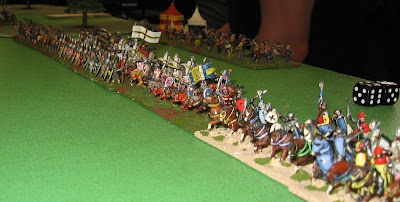 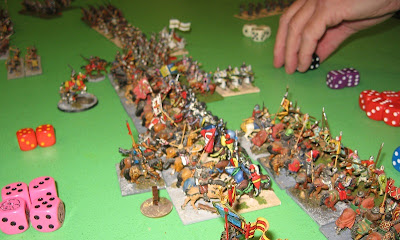 (combat all down the line)

*not that French tin cans were clumsy, of course ... I was using the term for effect!