Coming soon: the Battle of Montaperti (1260)

(my 13th Cent. Italians lined up and picking sides)

This is just by way of getting the topic started.    As you may have read elsewhere, the SoA BattleDay for next year is the 1260 Guelph/Ghibelline (in this case Florentine/Siennese-Imperial) battle of Montaperti. 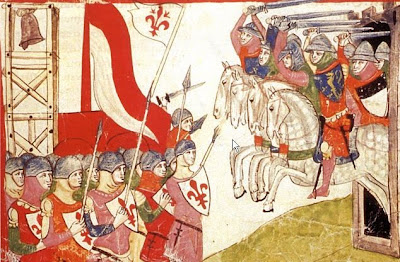 It has got to be one of the most colourful options available to the ancient/medieval enthusiast (I confess, I wasn't carried away at the time because I've done most of the figures already so it would be one of those 'not completely new' projects).

I have a late 14th Cent. Florentine Condotta army ... plate armoured knights and a big force of infantry liveried up based on the banners and costume at Montaperti. 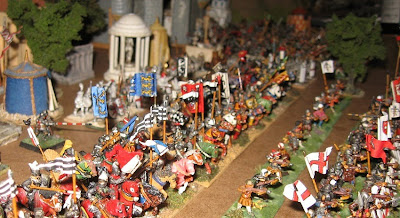 (Imperial and Siennese cavalry lined up)

... And I have a mid 13th Cent. Sicilian (Imperial) army where the cavalry force is based on the Siennese and Imperial knights from Montaperti ... so around 500 pieces pretty much ready to go plus a couple of the characteristic ceremonial wagons.

The Guelph infantry from one of my armies, the Ghibelline cavalry from another.

I have a few other armies for the period which can be raided - and I will enjoy making up new command stands and other battle specific special pieces.

The original source is the Libro di Montaperti based on a collection of contemporary papers and giving a remarkably detailed account of the enterprise.   For toy soldier enthusiasts, much of this is accessible, distilled in Montaperti - La battaglia nel diorama (ed Mario Venturi) upon which I have based most of my figures. 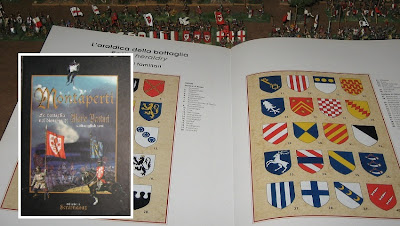 ('Montaperti' open at a page of heraldry; inset - the cover to look for)

I'll not give the entire story away at this stage save to say there were about 50,000 engaged including the Florentine Carroccio and War Bell,  there were civic militia, knights, famous dignitaries in a tale of pride heroism and treachery ... challenging to model in all its aspects in a wargame (which may make it an fascinating project) ...

The big question for me at this stage is which rules to use.   Obvious for me would be Armati ... it is my default option for historical battles and works very well in historical formats.   On the other hand, Armati is usually well-represented at the BattleDay (2013, both in optimal and epic scales).

Last time I presented a game at the BattleDay I did Plataea using Neil Thomas's Ancient and Medieval Wargaming.   AMW?   I think I would stretch it a lot to cover the human factors of this battle.    DBA is the system in which I am most interested these days - but that, too, would duplicate other projects (_and might be a bit too 'broad brush') ...

(Closing in  on some of those central Italian infantry)

Ignoring the less historically focused GW derivatives, two options that do beg for attention might be Impetus (popular, but not normally showing at Bletchley) and Poleaxed (these days, Poleaxed II) from the Lance & Longbow Society ...  The former tends to get talked up a lot - I have played it in a couple of tryout games, and quite enjoyed it ... the latter I thought very complex last time I gave it a go - but some Medieval enthusiasts swear by it ...

(next SoA outing will be Colours - a big Phil Sabin Gaugamela battle on the Saturday, my 54mm Bosworth participation game on the Sunday ... plus would you like to see Phil Barker's 1960s flats collection?: taking over the big Lost Battles space with DBA I will have extra tables left _and would be able to bring these historic soldiers along if anyone is interested Phil Barker's flats) 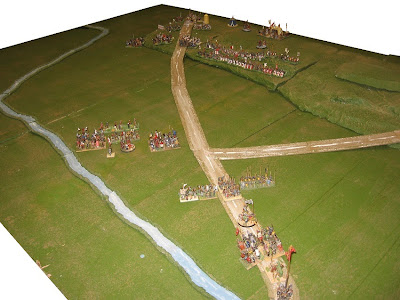 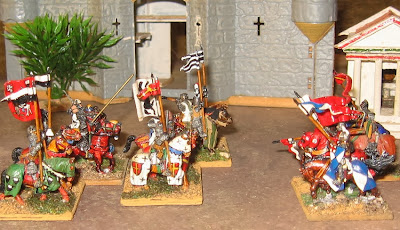 Ohh sounds a good idea, a battle I know nothing about.

This is going to look so good!

On rules, while I like DBMM I note you did not mention them; however a very good rule set for this period is Shattered Lances - worth considering, even though the yahoo group is moribund as the author saves tigers instead of playing toy soldiers.

Thanks for the comments ...

On the rules decision, I put the question in more detail on the SoA Forum. Basically some rules are virtually guaranteed to be covered: DBMM is ever present, and the team presenting usually includes Phil Barker.

As the original conception of the BattleDay was to see different rules run the same scenario side-by-side, my dilemma was to come up with something different (hence not mentioning DBMM) ...

I thought Shattered Lances was more a Crusades style game (or maybe that was because, in Society circles, it got talked about most in the Dorylaeum BattleDay discussions?

We had a basic run through the other day using Armati (just to see how the battle hung together) - it ran almost perfectly straight out of the box. We might do an Armati 'quickie' on the day, just because we can, but I now have a better idea what we are looking for in rules for the main session.

Wow, 'unknown' from Firenze! What ancestry! Not a great day for the Guelfs, though.

Thanks for visiting Ancients on the Move.