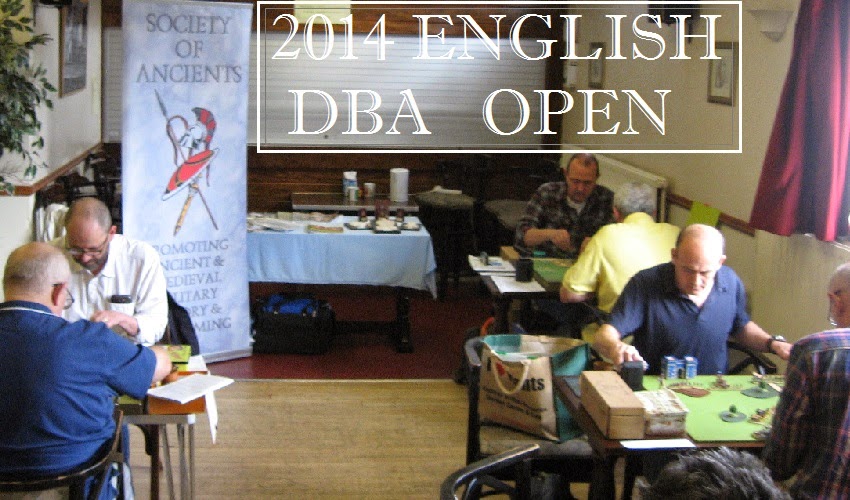 I very nearly had to open this post with one of those 'the monkey writes Shakespeare intros'.   You know ... you go on bashing away randomly for long enough  ... More anon ...

The Open is a one-day DBA event ... take any army you like but the players will then be arbitrarily pooled by date.  After a round robin of pool games, the winners and runners up go forward to a knock out scramble for the trophies.

In addition, the Open was the last round of the Society of Ancients UK DBA League - with some positions still in doubt on the day pending the open scores. 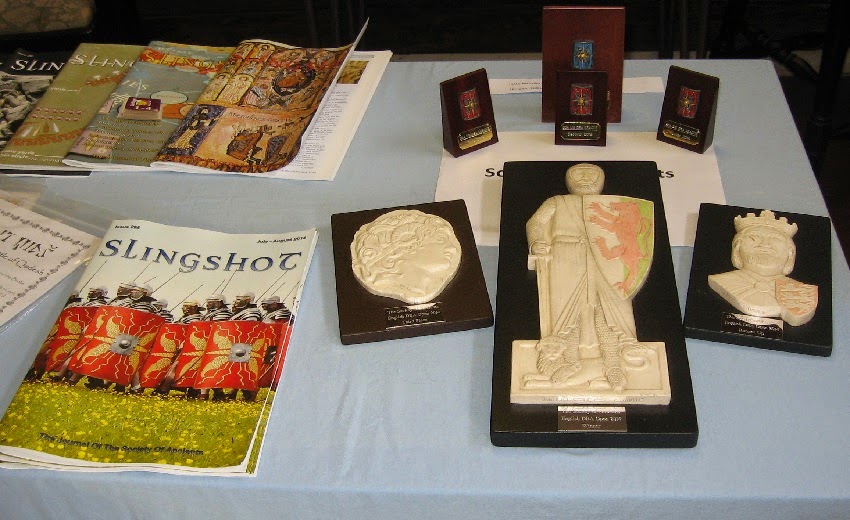 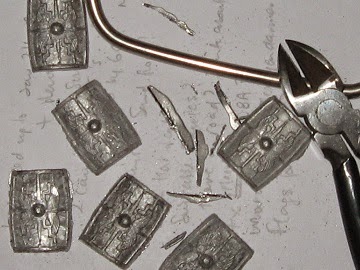 I do hope you like the shields ... these are hand cast and embellished in Northamptonshire and are unique to the Society.    In this case a number of ugly old figures, miscasts and off cuts were melted down and recycled.     As many of you know, I have a soft spot for old figures so rest assured no classics are being lost to posterity in this process - indeed I hope it is a sort of Valhalla for yesterday's misshapen and abandoned warriors.

I took along some generally unfancied Pre Feudal Scottish (III/45b) 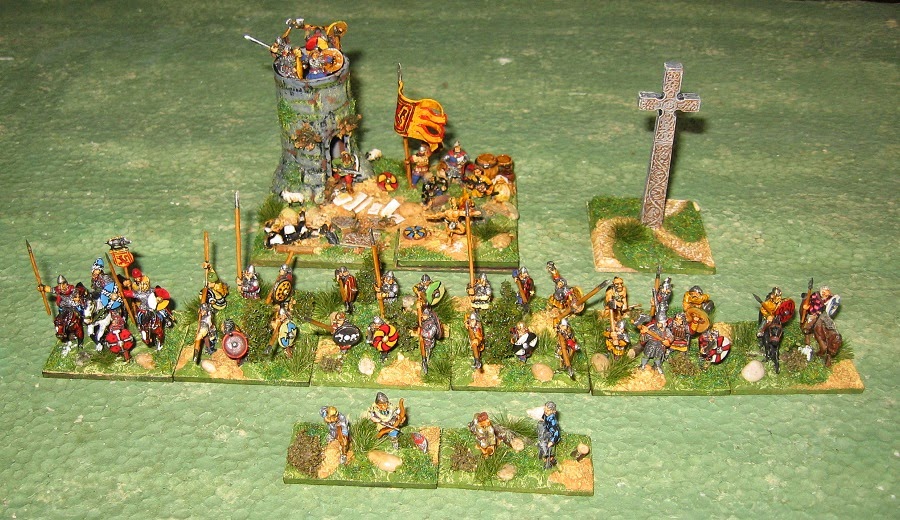 These are the rest of some bags of  Peter Pig Vikings and samples from other manufacturers which I put together for a Slingshot review.   I had them just about ready for Portsmouth - they will have a few clumps of heather added to their bases when I find where I have put the little bag.

The only fiddling - other than mixing in the different makes - was lengthening a few of the spears: this army will become '3Pk' under V3 (and lose a Ps for a Sp or Wb) and I wanted it ready for the new version. 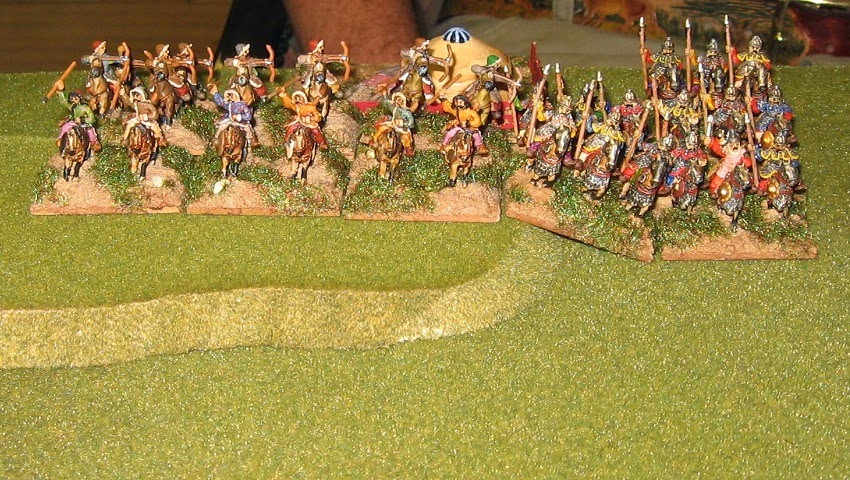 (the AD Pool: portrait shot of Tim's splendid Mongols about to sally forth)

In my 'AD' pool I got Mongols, Samanids, French Ordonnance, Magyar and a cross-over tussle with Babylonians ... a challenging series of opponents but not bad for an Open competition.

With all those LH my main plan was to channel the enemy with woods, back up my flanks and close the enemy down as rapidly as I could.  Attack rather than defend if there was any choice at all. 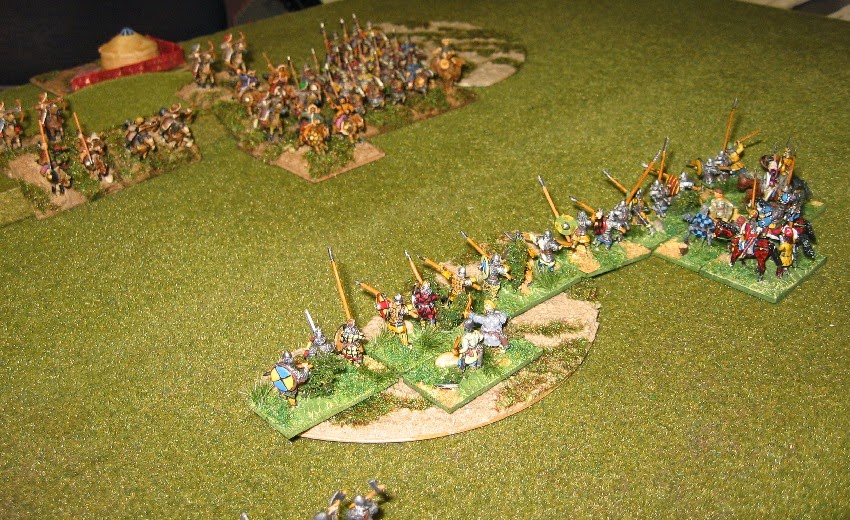 (closing down the Mongols: if they roll a 1 now, I am in business - my Zocs are coming) 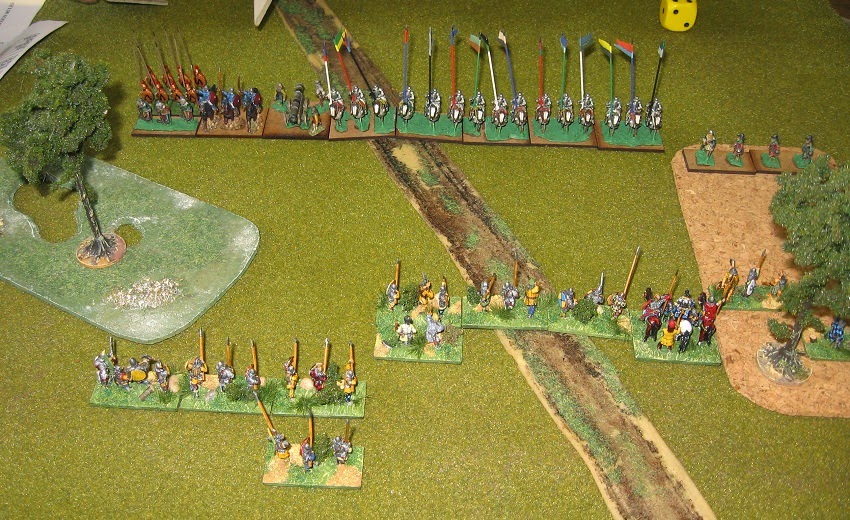 (Channeling the French ... in fact the flank skirmish in the woods - and its implications - decided this one) 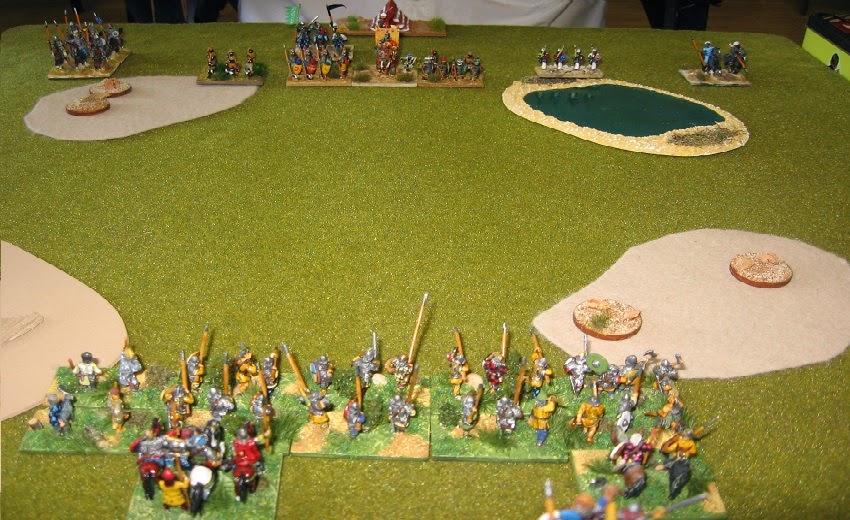 (Samanids: I was very wary of that elephant but managed to get onto its flank and turn the game)

I failed to get to grips with the Magyars (hard to pin them down with infantry and there's not much time to faff about with Portsmouth's sudden death timings), and, against the Babylonians, (put simply) I failed to find an answer to the disruptive effect of that wooded blob in the middle of the table (especially after an enemy Ax had jumped into it at an incompatible angle!) ... 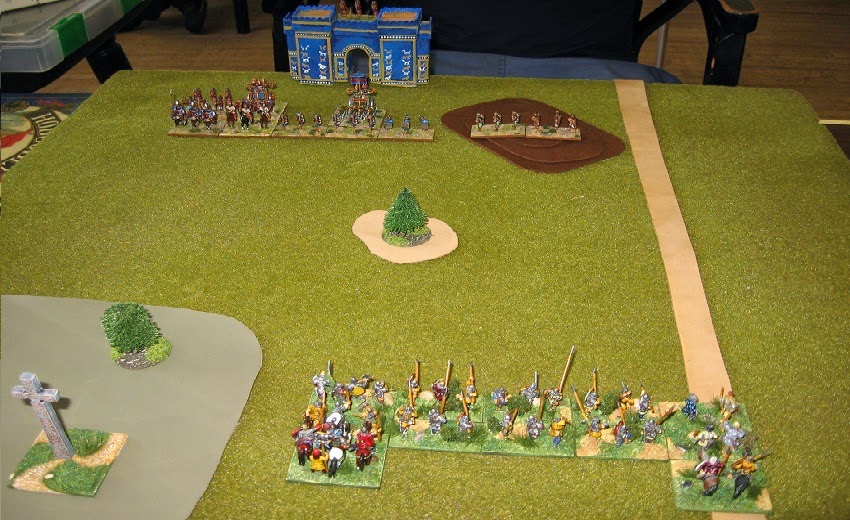 (crossovers ... this terrain was too complicated for me and it blunted my attacking intentions)

Even so, the plucky Scots topped the pool and thrust me into the semis.

So choices over ... the format for the final phase of the Open is for all 4 players to take the same army (in this case Wars of the Roses, although options could be chosen). 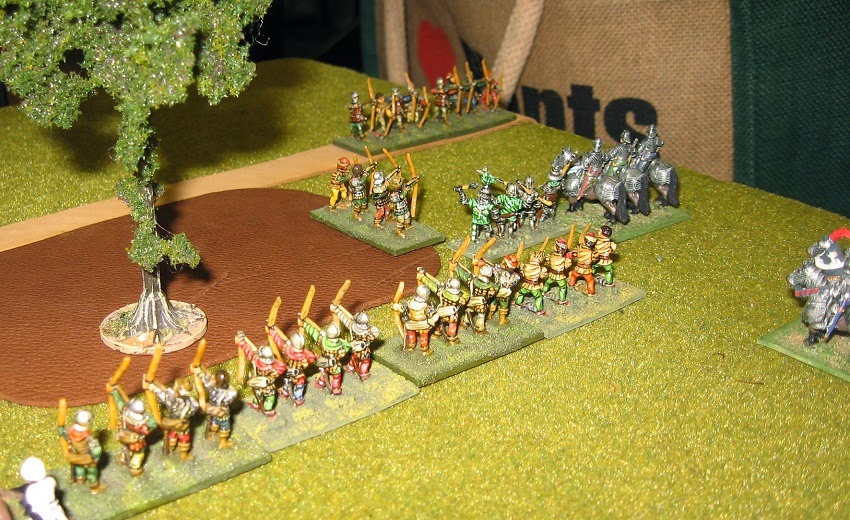 (semi-final: a favourable Wars of the Roses engagement)

I have to say I don't really find WotR in DBA 2.2 a test of much other than die rolling - but I got lucky and proceeded to the final ... 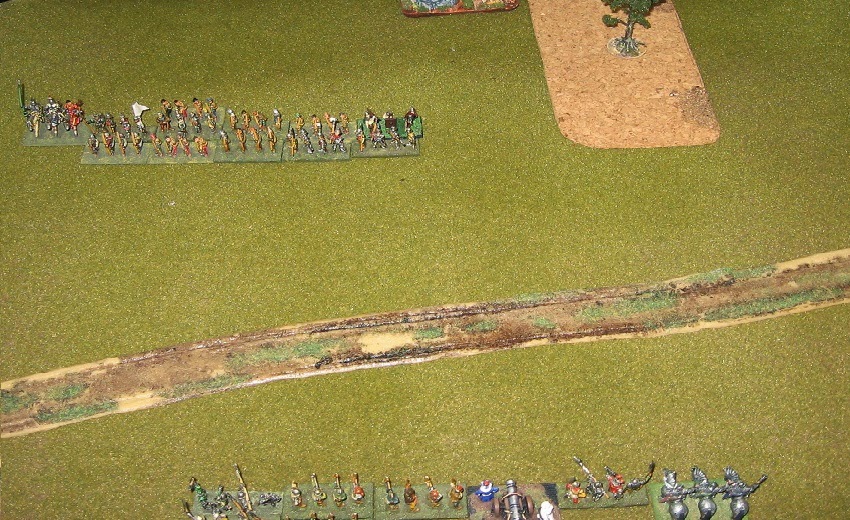 (Final: no gifts in this game ... more WotR ... an unfavourable engagement - I couldn't kill anything)

Then I got unlucky and came Second - Game over. 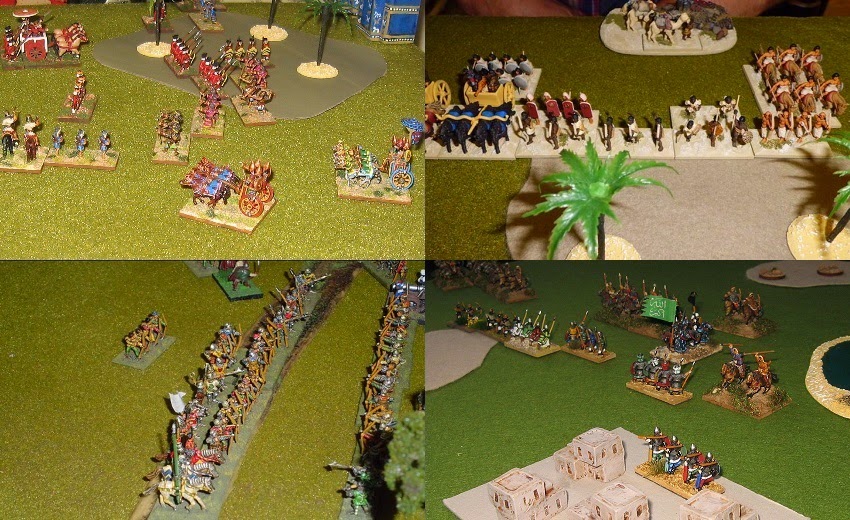 So in the end not the complete works ... maybe an accumulation of errors ... 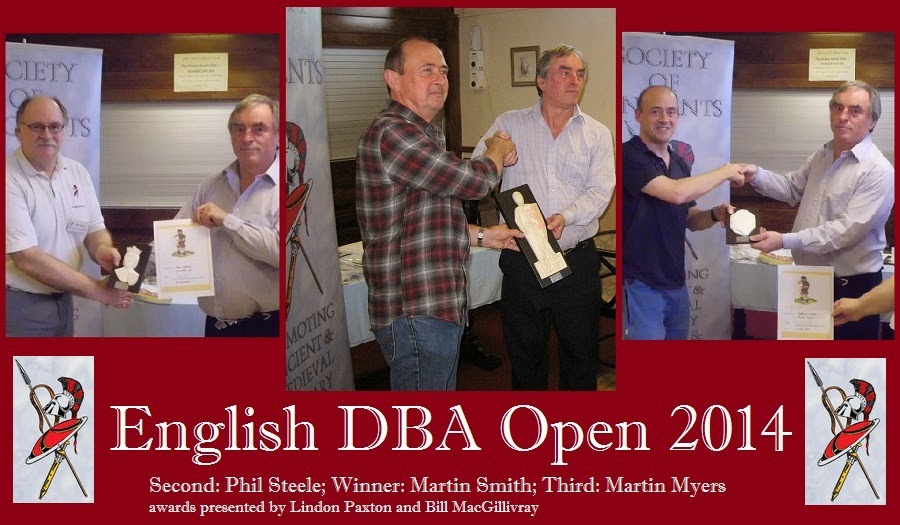 All this was sorting out the finishing positions for the national DBA League as well - although in the end Martin Myers did not manage to overhaul Richard Pulley's 3rd place score (so, by day's end, things looked similar to how they had started) 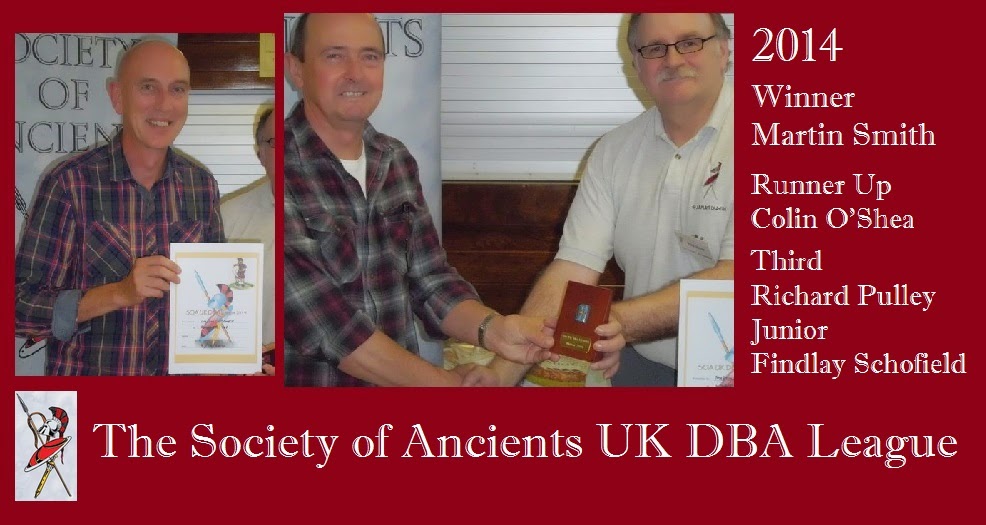 Many thanks to Bill, Lindon and the Portsmouth club for their customary first class organisation (and a new venue that was easy to find) and to Martin for the extra photographs.

The Society of Ancients and Magister Militum sponsor the English Open

More details, standings and results on the Paws DBA page
Posted by SoA Shows North at 1:25 AM

Another very interesting report Phil. I have been checking most days to see if you have posted a report on the Open. The SOA supplied trophies look very impressive as well. The closest I will ever get to one I suspect.

Great blog Phil, nice pics and attractive armies, wish I could have been there for the Open

Everyone is welcome, of course - international visitors especially (one day, maybe ... the Italian DBAers came over a few years back)

Deon ... thanks - I think I remember some splendid armies of yours over the years?