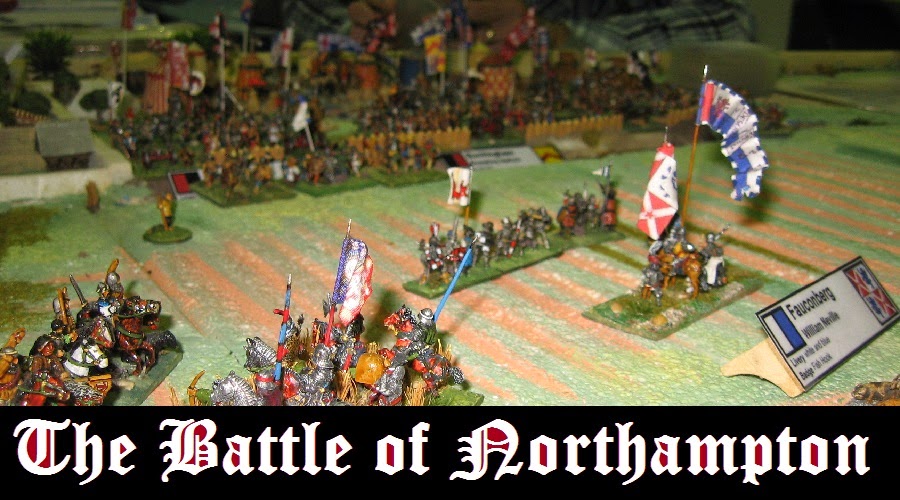 The Northampton Battlefields Society and WD at Derby World Wargames 2014

This outing, we took the Northampton battlefield presentation along to Derby's annual event as a Participation Game for up to 4 players based on the Society of Ancients classic De Matrica Bellae.

In this variant of Politics by Other Means,  players are given cards which they can use in building their narrative into what starts as a very basic figure wargame.   This means really quite sophisticated ideas can be woven into the game if that is how the players see it developing.   It is your game ... you decide what happens.

By an odd coincidence, the Border Reivers game on the next table to us was using a similar, if simplified, matrix game approach inspired by the same SoA Publication to run their cattle raiding game.

As well as the rules and cards for DMB, the games pack also contains a full multi-player map game, Londinium's Burning.    If you are lucky, there may be some stocks left at the Society webstore otherwise catch up with us at a show (we should be able to find a copy). 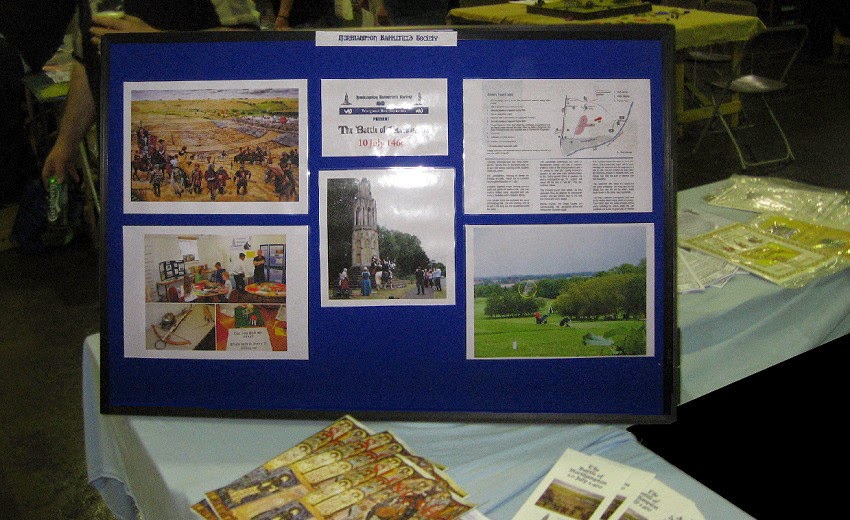 So ... The Northampton Battlefields Society was formed to research, explain and protect Northampton's battlefields - principally the 1460 site at Delapre Abbey, but also the other military history of the town and the further off Wars of the Roses battlefield at Edgecote.

Neither battlefield has been archaeologically surveyed so there is much more to do to understand them.

At Delapre (a park just on the edge of the town if you are not familiar with it: it is a couple of minutes off the A45, and has plenty of free parking so is one of the easier battlefields to visit) there are plans to establish football pitches and club buildings on part of the English Heritage designated area so we must be vigilant. 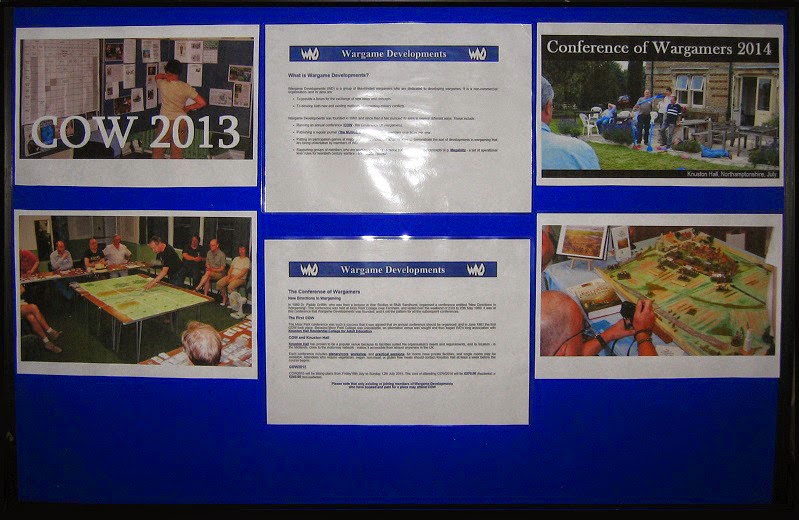 (the other side of the board ... Wargame Developments and some information about CoW)

Edgecote is on the route of HS2, so we must do what we can to preserve as much of the elusive battlefield for posterity as we can.

Wargame Developments is, of course, the host organisation for the Conference of Wargamers.   By coincidence also in Northamptonshire, CoW can play an invaluable role in developing and testing wargames and approaches to historical battles.

Ideas such as running the game to the canonical hours being rung in the abbey come straight from CoW and have been incorporated into the design of my sundial game clock. 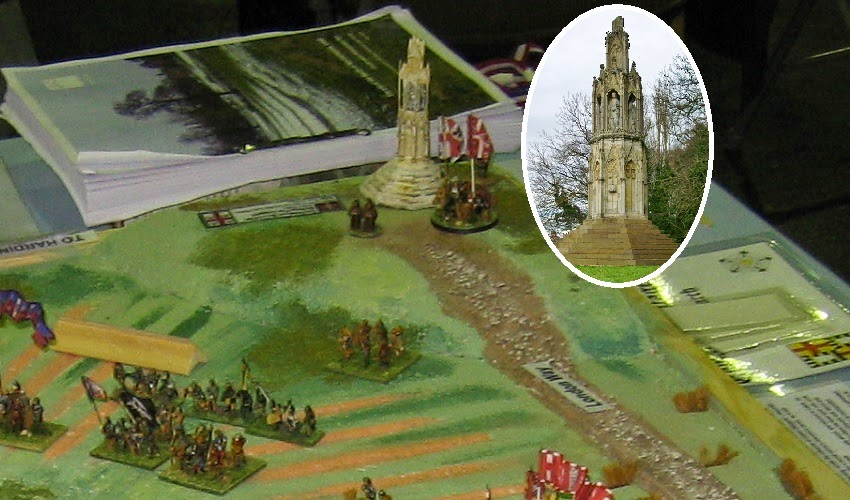 (improvements for Derby: the model of the Eleanor Cross is almost finished - inset: the real one)

At CoW we also decided to use the furlongs of the open fields as the measurement for the game mechanism (and coincidentally, effective range for a longbow is a furlong, so using contemporary measurements does seem useful). 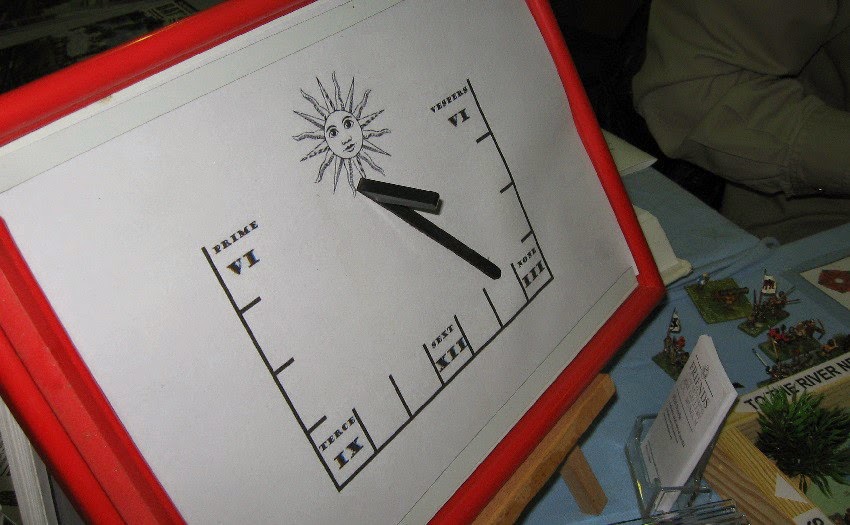 (improvements for Derby: the sundial game clock marked off with the canonical hours)

Nevertheless, it was quite ambitious running a matrix game at a busy and noisy show like Derby, so we had to learn as we went.

At times we may have got the balance of attention wrong - perhaps not giving enough to the casual browser ... then again getting distracted from the game which needs some thought and which needs to push along. 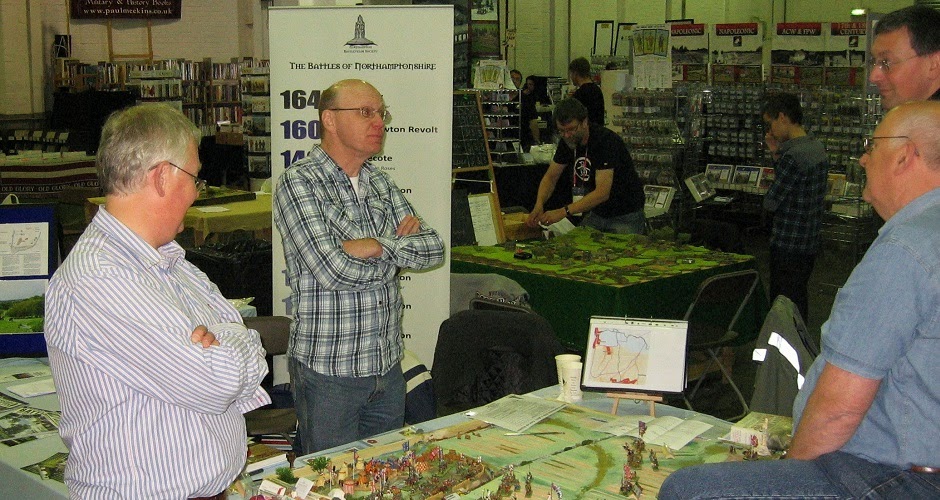 (listening to the punters ... there is quite some knowledge of medieval warfare arrayed around the Northampton table)

We got two multiplayer games played and a one player aside blitz version, and the possibilities developed as we warmed to the task.

A number of historical possibilities were explored - but in 2 of the 3 games the Yorkists got into the Lancastrian position, fulfilling the criteria for a historical result.

(panorama of the Lancastrian position ... standing to during what was, in 1460, a morning of rain)

In De Matrica Bellae, the final phase is that every player gets to make a case as to why the won i.e. bearing in mind their briefing and the events of the game, why they did the best.   So the loser of the on table battle may well be judged the player who did best if they can make a sufficiently powerful case. 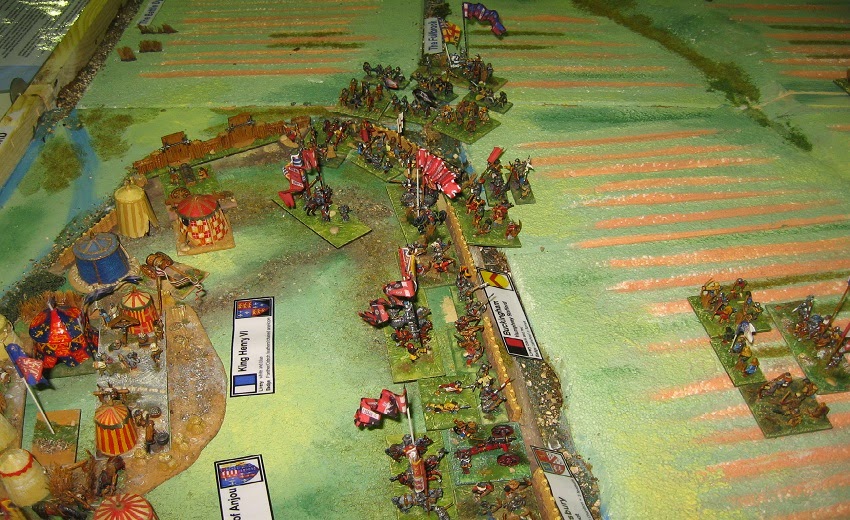 (a couple of shots from Game 2: Fauconberg repelled, Warwick breaking the barricades) 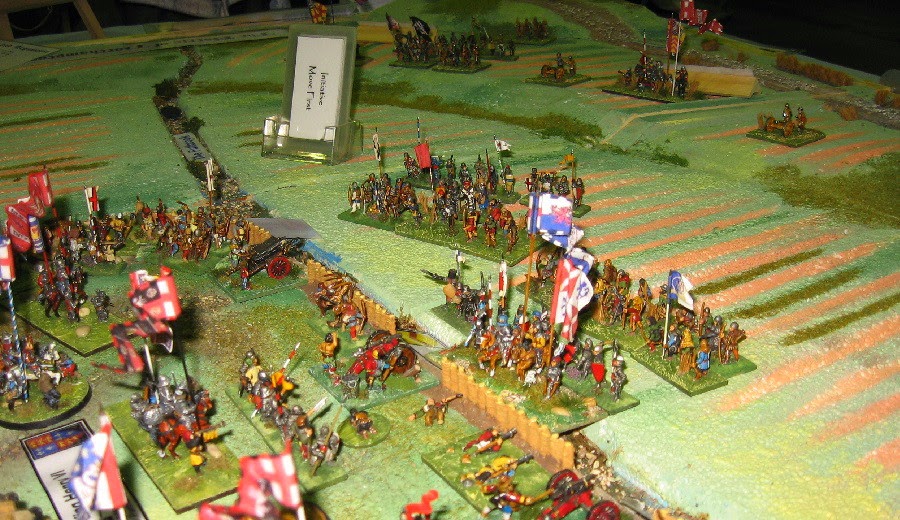 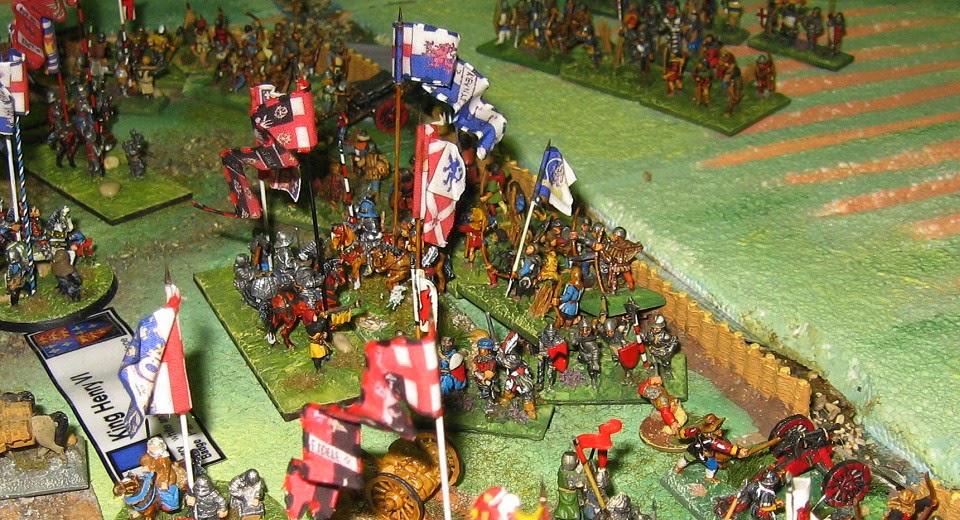 (scenes from Game 3: Fauconberg finds a weak spot in the defences, breaks in and tackles Buckingham)

The choice of winner is, of course, resolved by the Matrix argument ... it will be adjudged 'your day' because (3 reasons supported by a randomly drawn card) ... judged on strength by the Umpire (equals a die score on D6 you need to make or exceed) ... The player who exceeds the target by the most is the winner (so an outstanding argument and a good die roll are required - wargaming at its purest perhaps).

In the meantime, of course, we were also trying to interest casual browsers in the issues of the battle, explain the history and possibly recruit new supporters.

If we missed you on the day, apologies ... perhaps you will give us another chance:

There is a Facebook Page here (... you ask can join the group)

Other Ancient/Medieval tables at Derby ...

A couple of views of Graham Fordham's snowy Participation Game for the Lance & Longbow Society ... blending Saga with the activation mechanism from Bolt Action ...

(Northern Crusading from the man behind the Fluttering Flags) 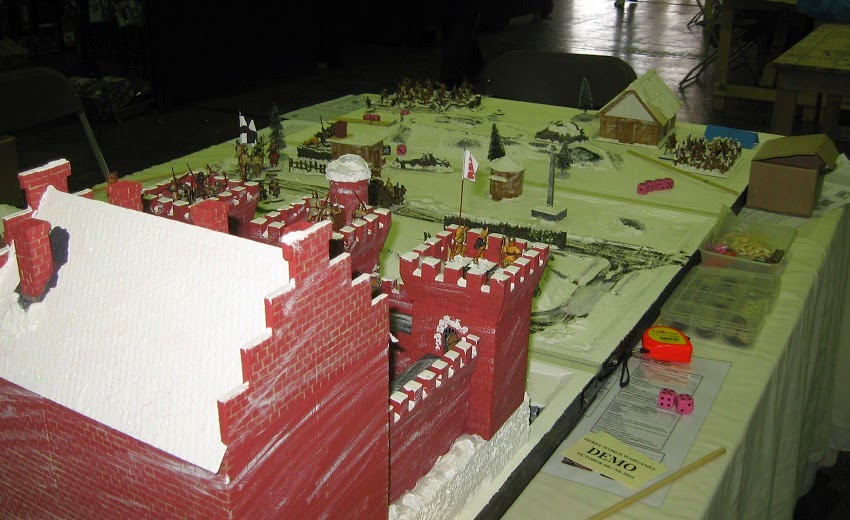 A popular opportunity to play the Gladiator game Jugula ... 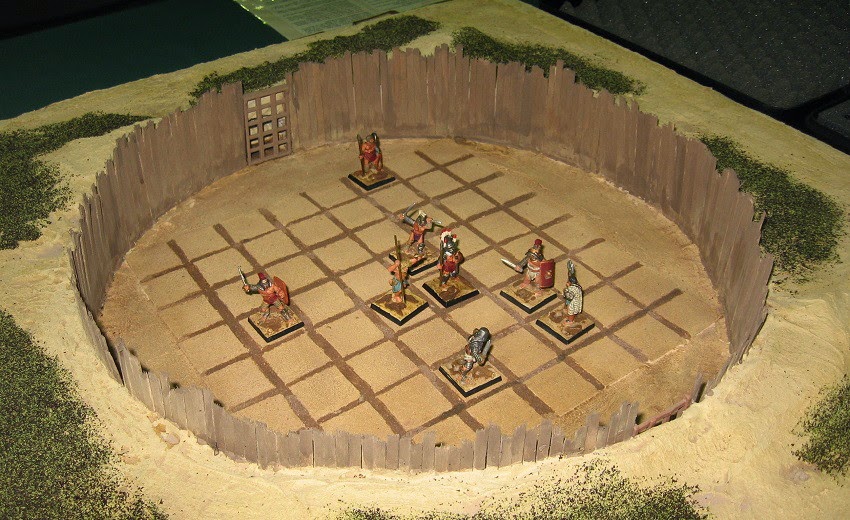 And that other matrix game raiding cattle ... 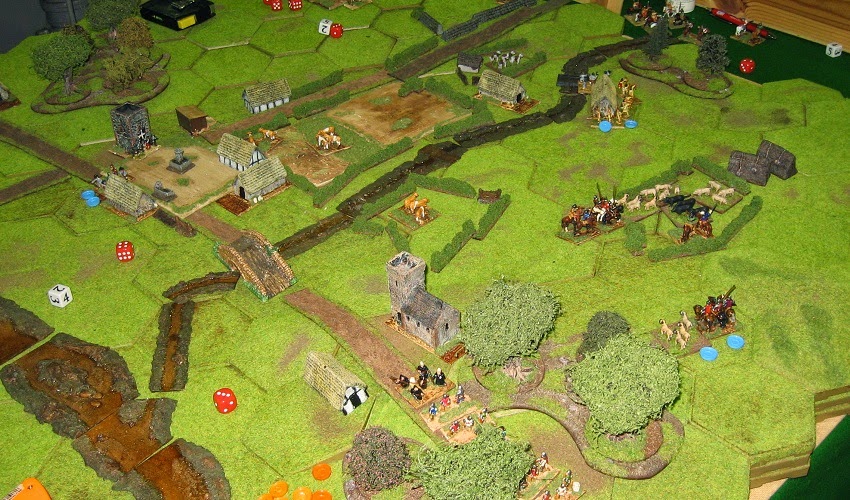 Here's a couple of selections of other stuff worth looking at around the show ... 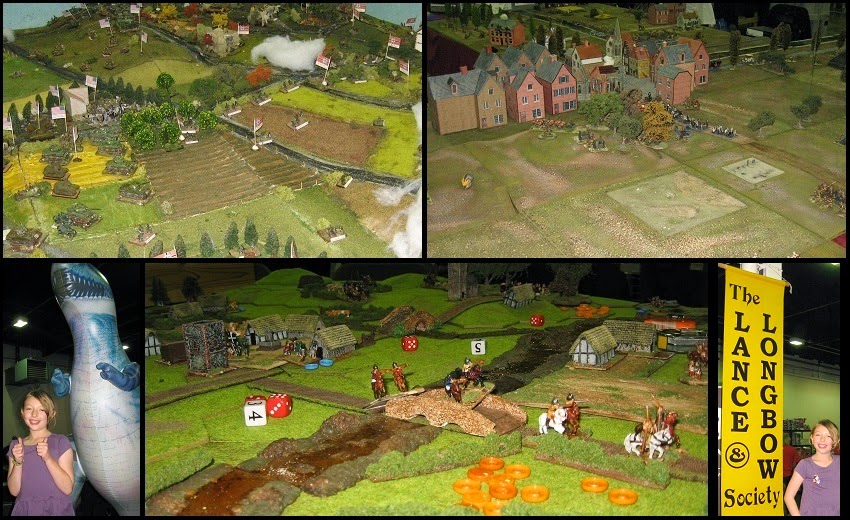 (Both world wars and either side of the cattle raiders, Tamara poses with the WRG dinosaur and the L&L yellow banner) 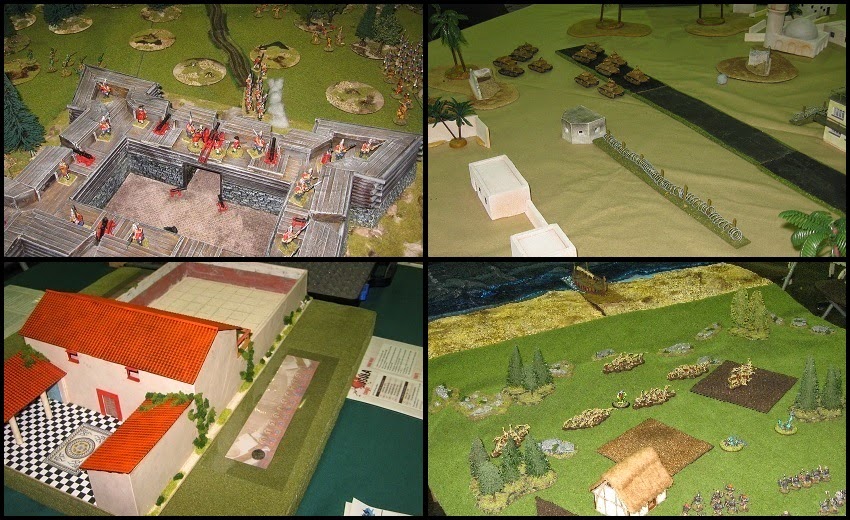 (some big buildings from the FIW and Jugula tables; some tanks and a ship)

But I'll finish with some views of the super French and Indian War table ... very inspiring ... 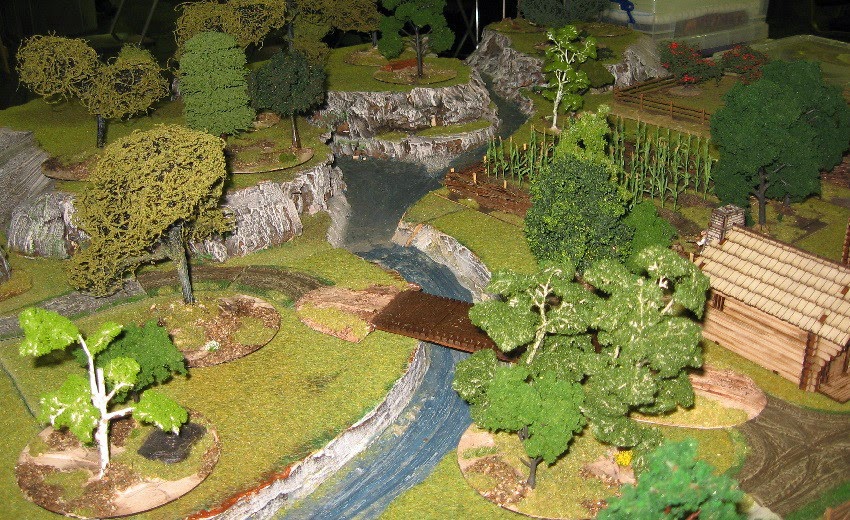 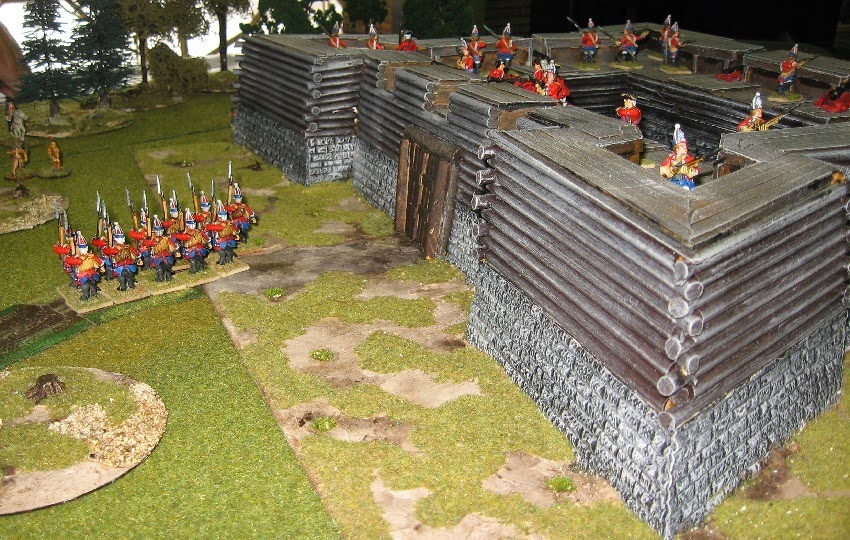 Joint winner of the best display game I believe ... well, for once, I agree ...

All in all, a very rewarding outing ... it seemed to fly by and thankfully the shows are coming thick and fast as I already know there was plenty of shopping I needed to do but hadn't made a list.

Great chatting to Ron Kay at Irregular about when he was stationed at Hardingstone in the 1940s (walking back from a night on the town past the battlefield and up past the Eleanor Cross) ...

Great making some new plans with Warbases.    And great meeting up with the Armati players for the first time in a while.

Many thanks to players and supporters ... thanks to the organisers for allocating us plenty of space - and thanks to everyone who helped.

See you at the English DBA Open in a couple of weeks (you are going, aren't you?) 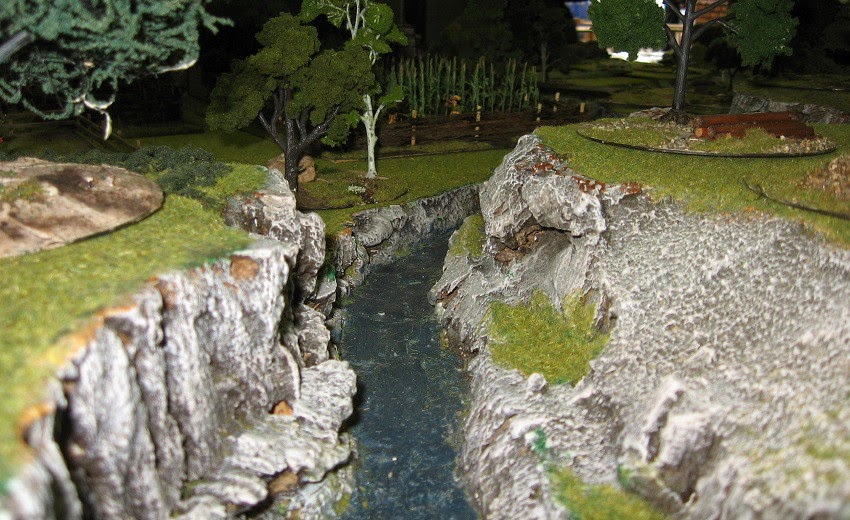