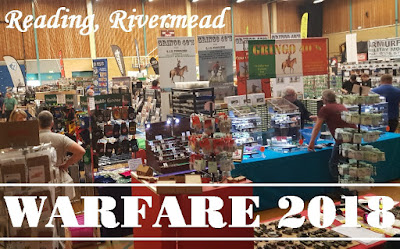 Nearly up to date, now, following this little furry of posts.

I've always like Warfare ... 20 years ago it used to be the last event of the season.  Based nearer London, it was a local show and the Society of Ancients and Pike and Shot Society personnel traditionally swapped around and played each other's show games before thy got put into storage for the Winter.

This year I was only able to go for a few hours on the Sunday, wasn't doing the stand and I'm not sure if P&SS actually do this one any more ... the SoA game was a WRG 7th edition bash in 25mm, however - so somethings looked just as they did back in the 1990s! 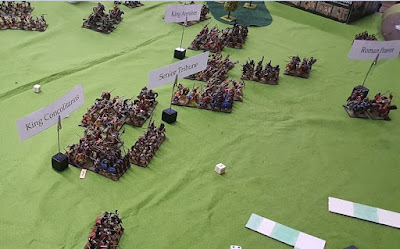 (WRG 7th at the Society of Ancients) 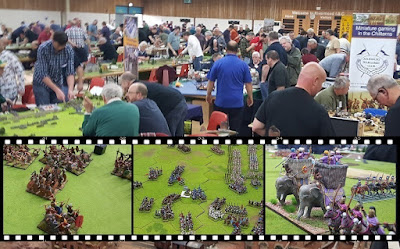 Adjacent to Adrian and friends doing the SoA game, the Armati enthusiasts from Malvern were playing a large Paraitakene (which had, of course, been the Society's BattleDay topic for earlier in the year) ... a perfect match. 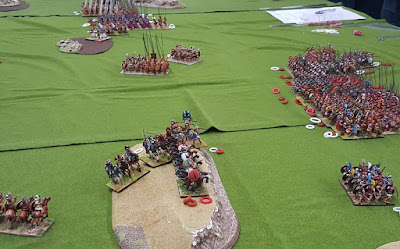 Armati has remained on of my favourite ancient battlegames.   It is a pity it couldn't make it into a third generation that addressed some of the peculiarities that somehow got between it and the outright best ancients game.

It's also not unfair to say that, implicit either in the rules or in how people play them ... Armati still seems to come with too much table clutter ... markers of all sorts.  Playing within the bubble of the game, you cease even to notice these aids, but they are a barrier to browsers who might otherwise get more engaged. 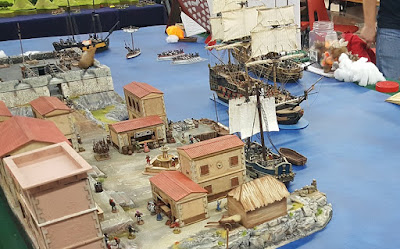 As I said, this was very much a flying visit.  I didn't get to see or photograph everything and there was plenty of good stuff, though not all of it ancient/medieval in theme.

But my last picture is that of the big naval/skirmish game.  I love the idea of these big ships and of proper toy soldiers on them.  Yeah ... one day ... indeed.  Where would you keep the models to do even a modest action in this scale?   But it is tempting ...

Graham and I had agreed to take the Northampton 1460 game to Pudsey, Leeds, for Recon on the first weekend of December, so that will be the last Shows North outing of the year.  Meanwhile this I hope to have a couple more entries to populate the new DBA Armies page. 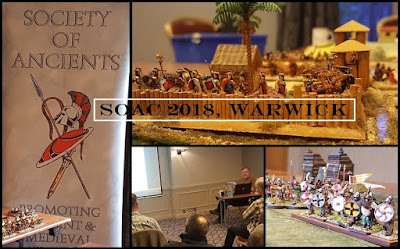 The 2018 Society of Ancients Conference

Again unfortunately I could only make the Sunday (well Saturday night dinner and ADG) due to other commitments (battlefield guiding at Naseby on the Saturday) ...

We managed a certain degree of  'alternative approaches' this year (the theme that kickstarted the conference 30 odd years ago) ... Graham put on Hydaspes using De Matrica Bellae (a development of Ancients by Other Means - a matrix game).  A norm for the Conference of Wargamers, matrix games progress the narrative through player reasoning and a probability roll, rather than the mechanics of the conventional wargame. 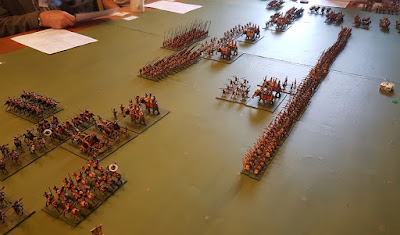 Overall, you should have been there: a weekend packed full of ancients games and study ... Duncan Head on Telamon, games across all periods, and a chance to sample everything from Mortem et Gloriam and Dux Bellorum to Gladiolus and new battlegame rules that don't even have a name yet. 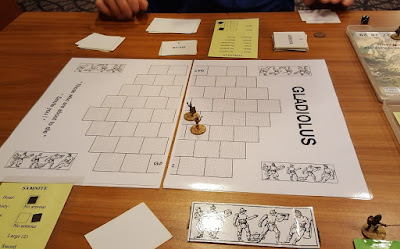 (Gladiolus at SoAC: original version on squares not hexes)

For my part, as well as running the Gladiolus ADGs and helping with Hydaspes, I ran a full version of Pharsalus with Double DBA. 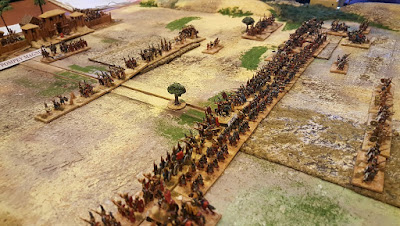 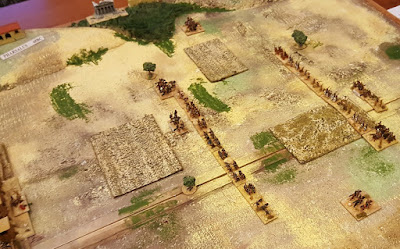 (Pharsalus at SoAC - the final showdown)

It was a real battle of attrition and very hard work for Caesar.

A great event as usual.  There is still a tendency to stay within comfort zones but there is innovation too.  Well worth a look next year.
Posted by SoA Shows North at 10:11 AM