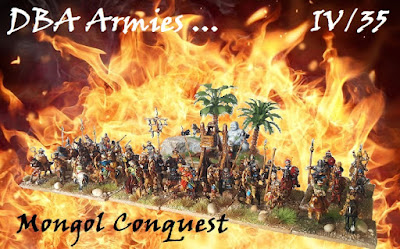 This is the cavalry army from the Mongolian Steppe that turned the 13th Century upside down, both in the West and the East.  It is incredibly manoeuvrable, but it can be a hard army to win with in DBA as its frontal abilities are nothing special.

(DBA Mongol Conquest: here it is stripped of its aura of conflagration)

The army is a mix of Museum Miniatures, Essex, Camelot, Alain Touller, Gladiator, Irregular, MY and Chariot.  A good mix of the usual reliable sources.  Here's the great man himself: 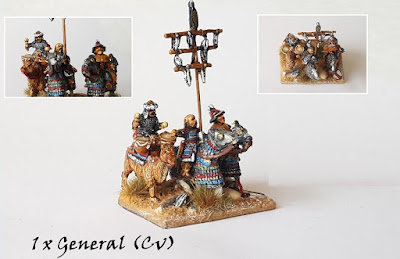 (DBA Mongol Conquest: the commander - more of a Yul Brynner than an Omar Sharif)

The army is basically a mix of cavalry and light horse - indeed, save the general, it can all be horse archers. 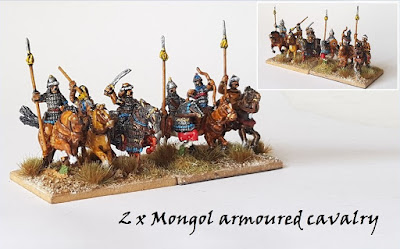 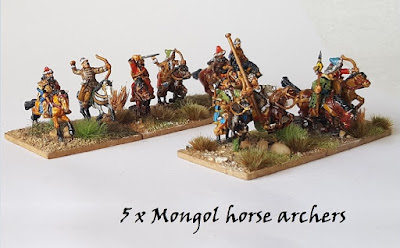 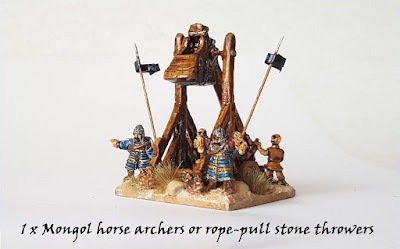 Or horse archers.  It is defined as 'rope-pull' but I had this counterweight trebuchet which has the merit of fitting on a 40x40 base (just) ... it is very old and came in a bundle of figures donated by a friend - so I have no idea who made it but am pleased to get it onto the table.

The crew, severed heads ready to load, came from Mick Yarrow's Siberia range.  Graham F found them (I had no idea) but they really look the part.

But back to the line up: 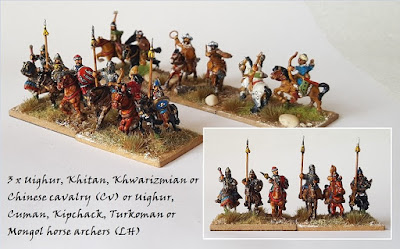 The beauty of is it fit both Eastern and Western themes (having terrorised indiscriminately) - here I go with an Eastern theme ... an incident with a tiger near a Buddhist shrine.  The tiger is a reworking of Chariot Miniatures prehistoric one.  It came out nicely  ... 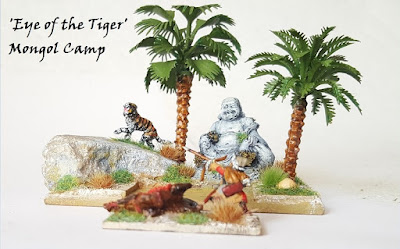 In my head, the narrative was that the scout has been surprised and felled by the tiger, who rounds for a a second attack.  The soldier springs to his feet and looses an arrow.  The outcome is uncertain. 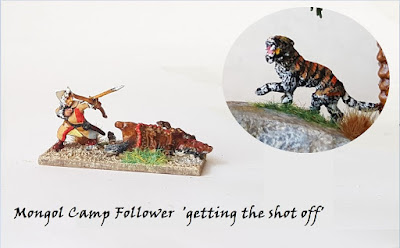 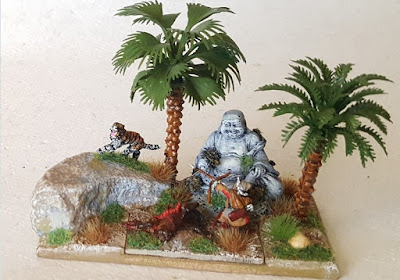 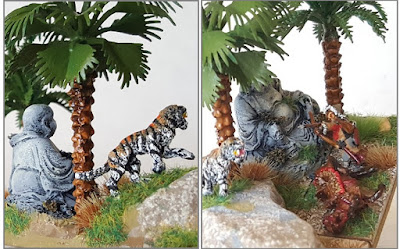 (DBA Mongol Conquest: the Eye of the Tiger)

This army is a little different in that it can field the stone thrower - which gives it an unusual long-range shooting ability which always ofers the chance of disrupting the enemy and putting them on the back foot.

In my collection, it pairs with Seljuq Turk, and the two armies are quite well balanced.

Very nice Phil.
A lot of manufacturers for the figure count.
The base element is very nice, and with an original theme

Very nice. I wish my Mongol army looked as good!

Thanks Khusru and Andreas ...

Much appreciate your comments.