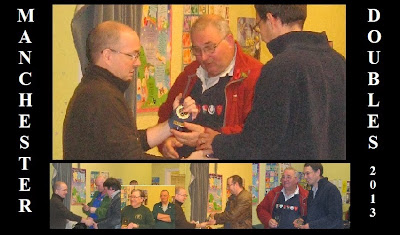 Early November saw us back on the road to Manchester for the final round of the one-day Northern Doubles - probably my last FoG ancients outing* ...

We took my Later Sicilian ... probably the most flexible and rewarding army to use in open competition, if not a big points scorer.   Although almost all the figures are more recent, this army dates back to the days of 7th edition and the original Society of Ancients series. 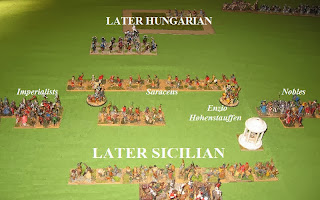 (Manchester Doubles: the Later Sicilians drawn up against Hungarians)

We were very fortunate to get two pretty plausible 'historical' opponents ... Later Hungarian and a less contemporary but very similar Later Castillian.   Both essentially cavalry armies, both with plenty of knights to fight.

The first game was a close draw, cut a bit short due to the tight schedule of the day.   The second game swung against us in the last turn or two and would have seen us defeated had another half hour been available to complete the game.

Despite the changes, I still like these cavalry fights and we can usually get a result somewhere along the line:   two keenly fought games that combined a good attitude with a will to outmatch the enemy and a proper understanding of the rules.

(The Glittering Prizes: lots of trinkets for players of DBMM, FoG-R and FoG Ancients)

I thought we would beat the Castillians by overwhelming their knights ... my worry was that our light troops might be driven off and the Sicilian Medium Foot would not be able to hold the line while the knights did their usual work.

Actually, the medium spear fighters repelled 3 knightly charges and the archers 2.  This enabled all the knights to get committed ... and on my side of the battle, at least ... get killed.   The Saracens finally succumbed to lost bases (auto-break in FoG) but by this stage they had been deserted by their noble compatriots ... 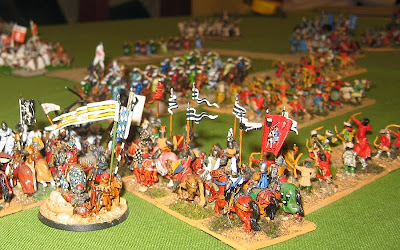 (the Duke of Bavaria leads his formidable Swabian and Ghibelline cavalry)

So a mid-table finish for the year - but we did get to pick up our second place trophies from the Derby round (so we didn't go home empty-handed).

The Castillians were commanded by Peter and Richard Butler who finished top of the Fog League, so we can perhaps pat ourselves on the back that we kept the game and the League in the balance for as long as we did.  Well done to them.

This was the last year of the current organising team, so many thanks need to go to Colin Betts, Geoff Pearson, Mike Goss and Dave Ruddock ... I think Geoff and Dave will be part of the new team, Colin and Mike are taking a break.

All the great wargames events we enjoy depend on the time and forbearance of volunteer organisers (and they are always outnumbered by players who don't get their lists in on time, roll up late, leave armies at home, don't know the rules etc. etc. i.e. the rest of us ...).

Take a bow, all you volunteers.

Also in November, we had a big AMW Raphia refight in Northamptonshire ...

Here are the pictures: 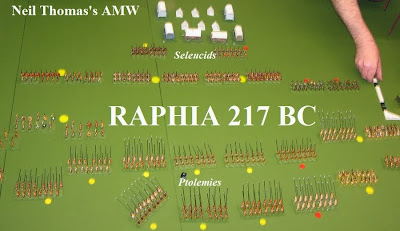 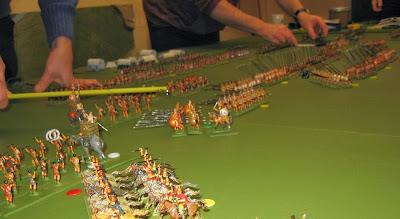 (down the lines from the Ptolemaic left wing) 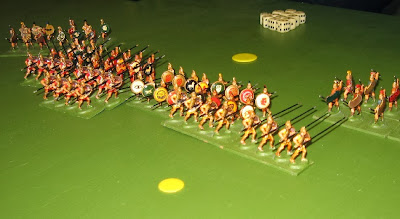 It looked splendid but was by turns engaging and clunky.   AMW has some limitations 'straight from the box' and we haven't got all the tweaks refined for a big Hellenistic battle like this.

See the Society of Ancients next at Warfare.   Lost Battles (Sat. only) and the Crusades.

*I enjoy all these wargaming gatherings, and look forward to meeting up with friends at Usk and Burton next year ... I just think I have got what I want out of FoG-AM, now it is in its second version - so I am hoping to try FoG-R for these upcoming events.   I will still take some photos of the ancients games, of course.
Posted by SoA Shows North at 3:58 PM