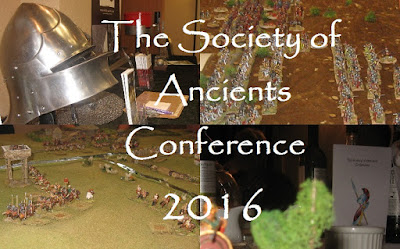 The Society of Ancients Conference

Very pleasing to me to see the return of the Conference ... part of the lively SoA mix in the 1990s I was, unfortunately, the Committee member back then who had to cancel the last of them (SoAC VII, I think ... maybe VIII) due to price hikes at our traditional venue.

The cancellation was only ever meant to be temporary but the old style Committee was always reluctant to underwrite what it thought was a minority interest, so getting it back up and running was daunting.

So a big thank you to Richard L for getting it to happen.

I'll doubtless do some features, and Slingshot will, I am sure, have some games, articles and scenarios - so this will just be a round-up that doesn't steal all the thunder.

Around 4 talks and 8 or so games sessions (usually with 3 or 4 games to choose from in each slot), an annual dinner and lots of social mingling/bar time.

Few ADGs, very little workshopping ... nothing outdoors ... a big Tactica session that ran all weekend.   So somewhere between a 'wargames holiday' weekend and CoW. 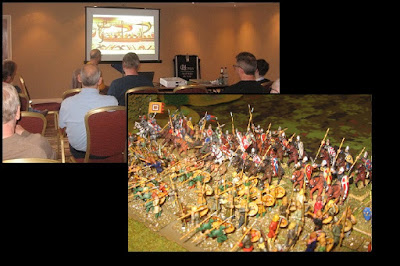 Some sessions dovetailed with plenary talks and current topics (above, Matt Bennett on 1066 and a Hastings game using Armati II) 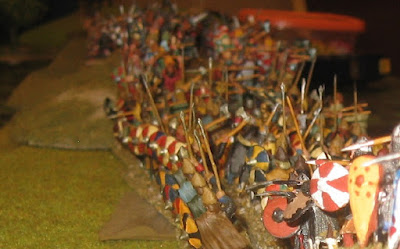 Some were stand alone 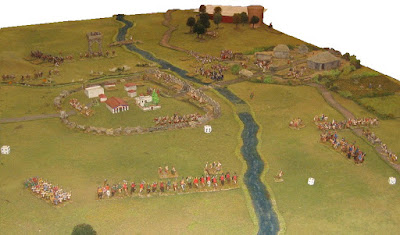 The dinner was excellent - nice to sit down together at the end of a full Saturday ... the food was very good and the speech by SoA veteran Will Whyler reflecting on the last 50 years was bearable (actually very good ;) but Will is a long-standing friend and you wouldn't want me to go over the top). 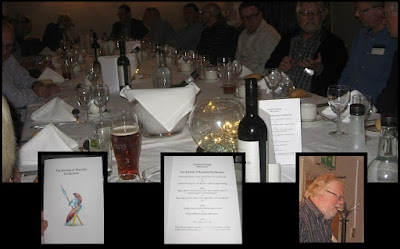 After the dinner we did manage to get a few games of David and Goliath played in memory of the late Andy Gittins ... former President and a Conference regular ... 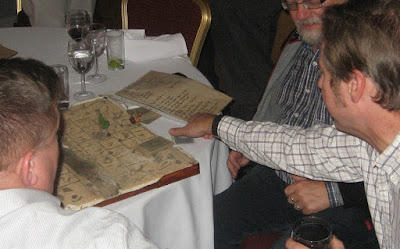 ... and, yes, that is the originl D&G set (with one or two loving repairs by me to make it Conference ready) ... 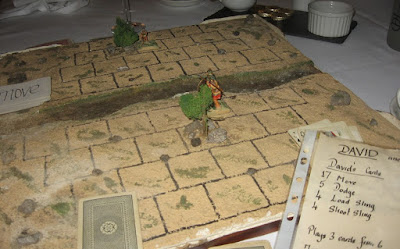 I had volunteered to provide Richard with a backbone of games sessions on the theme of wargaming historical battles so here's a summary of what I got up to over the two days ... 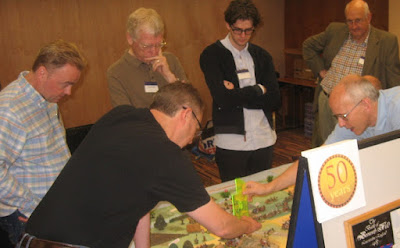 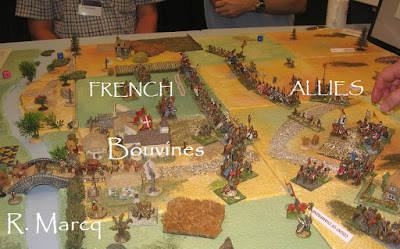 In this play through, Ferdinand count of Flanders very nearly pushed up to the bridge but ran out of supporting troops - eventually succumbing (captured on the field of battle as his historical antecedent) ... Elsewhere it was an attritional battle in which the allies could make little headway.

(Bouvines - from the North before the lines clash)

Bosworth, of course, was fought on very different lines to Bouvines ... the combat being more deadly and the traditions of chivalry being no barrier to the political benefits of killing your enemies on the battlefield. 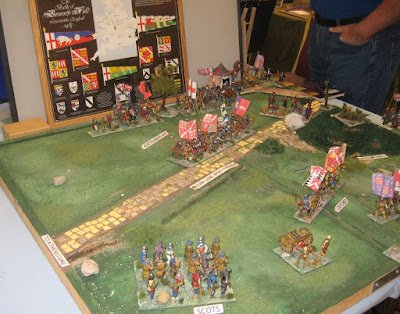 This was also a different style of game: 54mm figures and just the conventional 12 elements per side (well 12 for Richard, 11 plus the hope of Stanley for the Earl of Richmond) ... 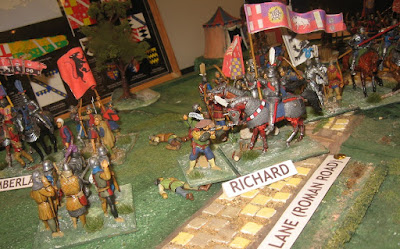 Richard narrowly lost this battle having dashed amongst the vanguards on a 'death ride' that took him from the marshy end of Fenn Lane and the likely Stanley trap.  It gave us food for thought.

I think it vindicates the modern interpretation, however.

I played all these battles with DBA despite having run Bouvines with Armati and Basic Impetus previously.  I decided that my theme of translating long-lost batles into playable wargames was best illustrated by using a common platform, rather than asking players to switch horses game-to-game. 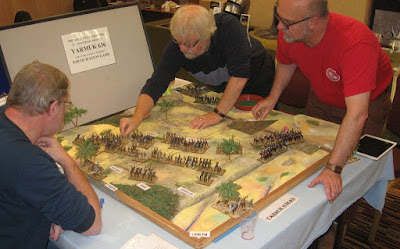 The third battle I looked at was Yarmuk ... this was my main contribution to The Great Battles of History project by the DBA contributor group.  It features original flats from the collection of DBA author Phil Barker - the ancients collection he once used with Tony Bath and friends in the 'pee-history' of the modern game. 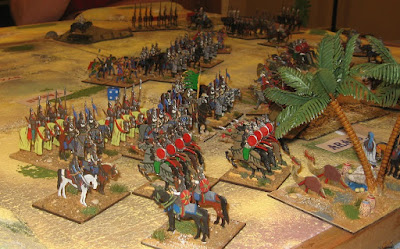 I have to say I still think they look splendid.  Of course, today's wargame plays using the base as the component - the figures sit on top and tell you what the base is and what it does.  30mm flats (or indeed, in the case of the Bosworth game, 54mm solids) do just as good a job and have a unique, timeless, charm. 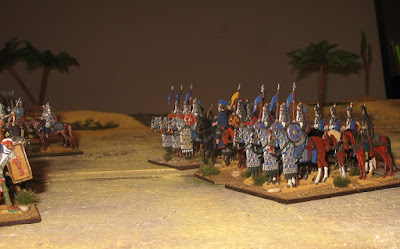 (Byzantine cavalry - originally by Phil Barker, refurbished and based for DBA by Phil Steele)

... and then the players proceeded to destroy each other in the most monumental battle of attrition this scenario has yet produced.  Actually not unlike the original battle as afra s we can reconstruct it with confidence.

Richard wanted to schedule a look at reviving the old SoA incentive games so as a light-ish end to the Conference I ran the show version of Greyhounds in the Slips ... 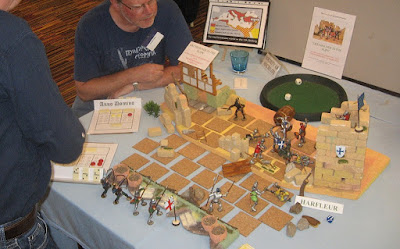 Although we were tight on time, we ran through twice, as, for the first time in hundreds of games (and not without a little player hubris), Henry got himself killed in the very first action of the game: jumping out of the trenches to deliver his Greyhounds speech and immediately shot dead by a crossbowman on the battlements. 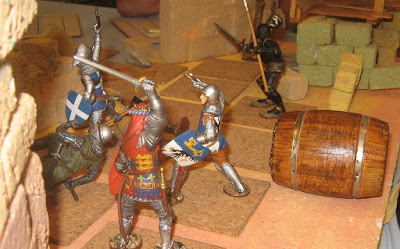 (Greyhounds in the Slips: Henry V in the rubble of Harfleur)

It wasn't to be his day, however ... and he was last seen battling into the town at the head of his men - as they fell around him, the Captain of the French garrison administered the coup de grace. 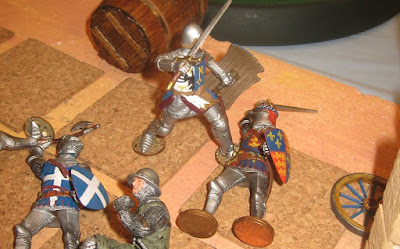 What a splendid event.  See Slingshot for details and don't forget to book for next year.

Great mix of old friends and new faces ... thanks to all the players ... thanks to Paul for an inspiring talk on Shakespeare's treatment of Roman politics, and to Matt for getting the Arsuf agenda up and running.

Phil, many thanks for your essential contributions to the resurrected Conference. Your description of the weekend reminds me what a good time we all had! Roll on SoAC 2017! Watch out everyone for details of how to book, we expect spaces to be snapped up...