Round 9 of the 2019 Society of Ancients UK DBA League

Turn out was a little bit down at Britcon this year.  I'm not sure why the National Convention's DBA round has not 'caught on' to the same extent as the other League tournaments - although, undoubtedly, it is disappointing only to be playing 5 games when 6 or even 7 seem eminently possible (the other events at Britcon have an evening sesion so the rest of the venue plays on well beyong our early finish).

This year, for a theme, tournament organiser Simon chose The world of Rome without the Romans (who would have ruled the ancient world 2000 years ago if the Romans had no longer been around in the 1st century BC and earlt 1st century AD?) ... a sort of runner-up empire play off. 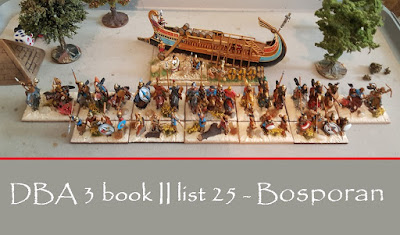 Now I have long been fascinated by the Black Sea Greeks and their Bosporan, Scythian and Sarmatian enemies, neighbours and allies: such a fascinating mix of cultures.  Such a lot of gold.

So much so, indeed, that, some years ago, I had bought the figures for a Scythian/Black Sea Armati army but had then never got round to painting it.  Quite a few of the first issue Falcon Figures (now rekindled by Lurkio).  So, in an effort to get a moribund project moving again, and for it's nice mix of classical and steppe warrior types, I chose Bosporan.

It turned out to be a popular choice and the top army pick - I guess for that mix of low aggression and littoral terrain (yes, all that nonsense) and available knights ... although my mix was far from optimal thinking, or so it seemed.

It's a very colourful army and I pretty much got it done although, not for the first time, it went to war with the bases still very plain.  I'll tart them up a bit more, then do a special feature.

These were my games. 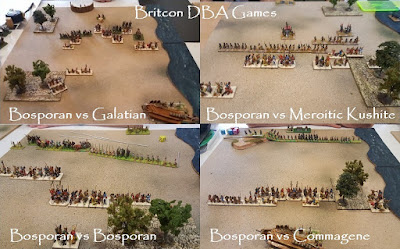 There are four of them as I made a satnav error and got stuck a few blocks away from the venue while Frank played (and won) the first game.  I managed another 2 wins and didn't do any littoral landings despite defending all through.

So a parr performance for the army and respectably mid-table for me.  I liked the way the army played although it never really got the whole 'rub of the green' thing going. 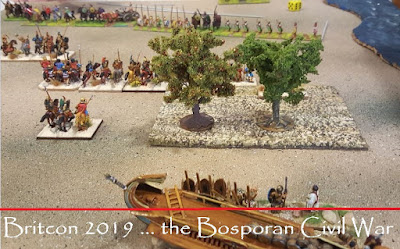 Colin did very well with another of the Bosporans and there was a great finish by local buddies (and occasional DBAers), Chris and Patrick, with their otherwise unfancied Meroitic Kushites.  The other popular choice was Commagene. 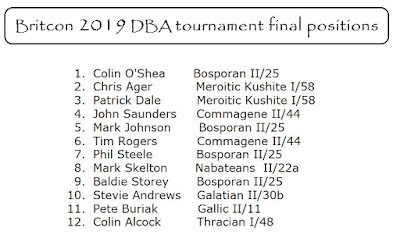 The whole event was pretty big as usual, and there's plenty of trade around the main hall.  There's really only the Manchester-based demo team from the Lance & Longbow Society there to make it a 'show' - which seems a bit of a missed opportunity ... then again, all the space is taken up with tournament tables and these always seem to sell out so the odd formula does seem to work. 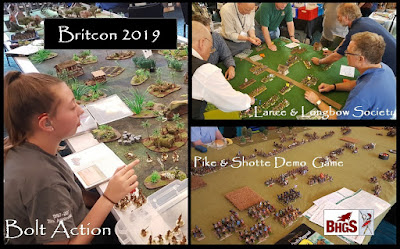 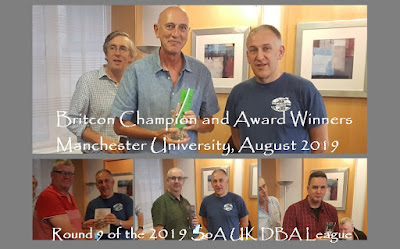 (Tim Porter presented prizes on behalf of our hosts, the BHGS)

A splendid day, although, as I was dining with players from other games, I had a long wait before going out for the end of the evening.

The Society of Ancients Championship