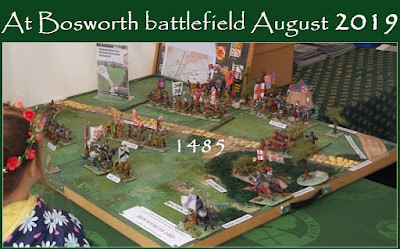 Another Big Weekend: Part One

The weather forecast wasn't too bad for the first day of Bosworth's annual Medieval Festival and battle anniversary weekend.  When I arrived ahead of public admission, the site was still being fed by tractor with fresh straw but the sun was shining. 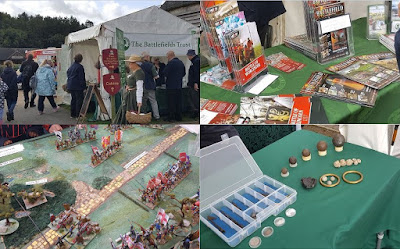 (with the Battlefields Trust at Bosworth 2019)

I was with the Battlefields Trust again, and David had asked me to bring the DBA Bosworth game as an interpretation aid and general eye-catcher. Saturday only, of course, due to how crowded 'heritage' August has now become, but it gives the stand a nice mix.

The battle was fought 22nd August 1485 and the main attraction of the festival weekend is a grand battle in the show arena each afternoon restaging a narrative of the engagement.  It is very big by the general standard for medieval pageants, and this year the artillery was particularly loud and set off car alarms in the adjacent car park. 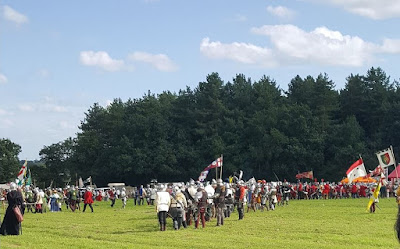 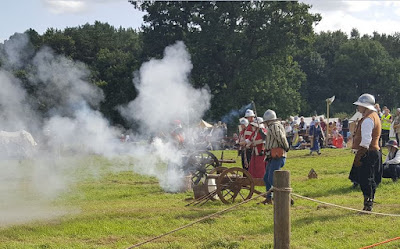 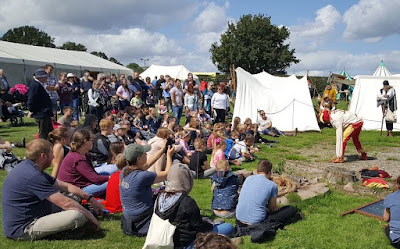 (Bosworth 2019: the jester attracted a big crowd and by midday the ground was dry enough to sit on) 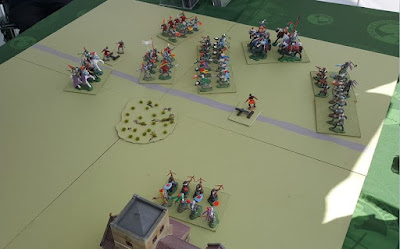 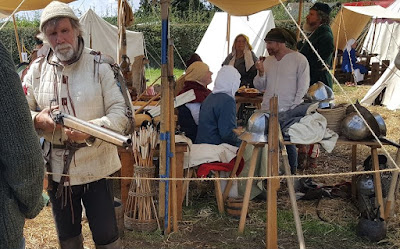 Some pictures of the Bosworth game

I am pleased to have inspired the Development Officer to build up a small collection of Swoppets to do his 10 minute battles with ... it is an example of the toy soldier thing going mainstream and directly follows up on the battle dioramas and demos I have done ay various shows over recent years.

I will take the DBA game along to the Conference this year as Richard has chosen Bosworth for the BattleDay in 2020 (which will be the 535th anniversary year) but it has not been out for a while and I was pleased with the look and utility of the big figures. 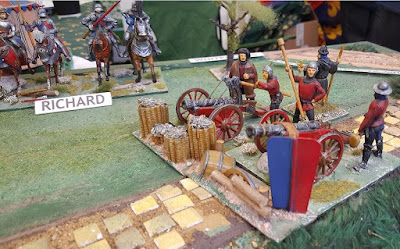 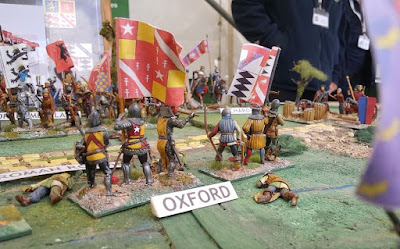 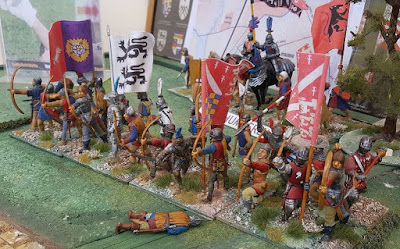 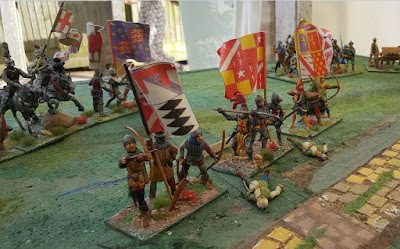 The figures are 54mm/1:32 and a mix of modern plastics, old toys and metal figures by Irregular Miniatures.  The guns are actually adaptations from Irregular's 40mm range.  The flags and banners are a large size run specially printed for me by Fluttering Flags.

The weather held out for us pretty well on Saturday, the icecream vans did good business and the tent didn't blow away.

I was surprised, given the status of King Richard, these days, at the 'given' shield in the kids armour boxes in the shop ... 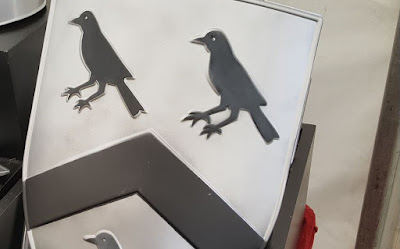 ... instantly recognisable to historians, of course, as Rhys Ap Thomas, the man who, legend had it, smashed the king's head in with a poleaxe.  My afternoon finished however with a random shot of the king bathed in a mystical light which only my camera picked up. 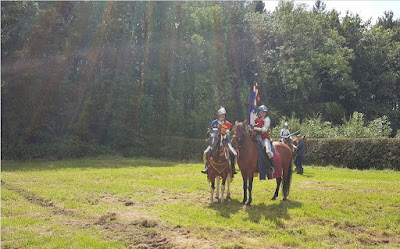 (Bosworth 2019: the Sunne in Splendour shining  on the son of York)

And that was not actually the Sun-day ... on Sunday I would be in Newark.

Society of Ancients BattleDay
Posted by SoA Shows North at 7:42 AM