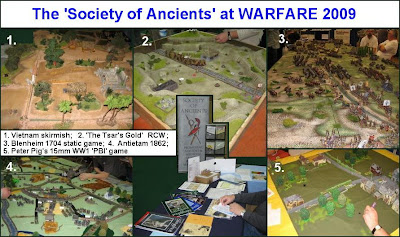 Whilst some shows seem to have fallen away slightly over recent years, Warfare at the Rivermead seems to get better every year. once upon a time, it seemed the main hall was sufficient to house the trade and display games, the gym was spaciously accommodating competitions. Now the show proper takes the main Hall and half the gym, the competitions fill out the rest of the space, there is even a strange room right down the back with Warhammer stuff in it. The ancients competitions have always been very well supported, and with a good range of trade and games, this is an excellent event which fully demonstrates that the way to succeed is to stick to that traditional balance, mixing plenty of stuff to join in with and try out with the shopping and competitions. 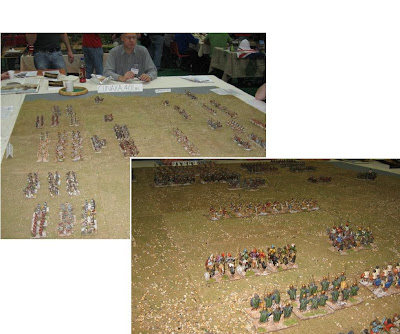 (Phil Sabin/Eric Cruttenden's Lost Battles presentation of Cunaxa)
The Society of Ancients followed a now regular formula at this show ... a large 25mm Lost Battles participation game with author Philip Sabin on the Saturday, swapping to a Medieval Warfare try-out game with David Edwards and Kevin Large on the Sunday.

Cunaxa provided one of those classic 'Lost Battles' challenges ... how to beat a (significantly) cavalry army with hoplites - but at the same time (given the colossal advantage the hoplites enjoy, and for which they pay), how to win a game in which you can hardly afford to lose any soldiers? I know - during a quieter session, I played the rebels ... I won the battle itself, but narrowly lost on the game score. That probably will have meant a long and testing journey back to the sea ... 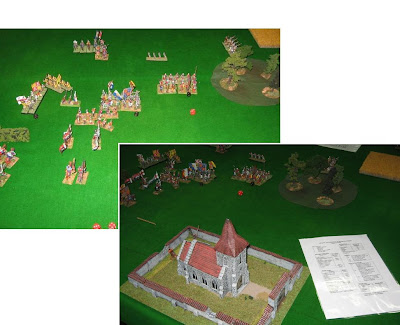 (the Neil Thomas Ancient and Medieval Wargaming table)
Out and about, a number of things caught my eye ... A very legible layout of Antietam. Antietam is one of the many 'visitor friendly' battlefield in the US, and it was interesting to relate what was shown on the table to walking the field ... especially 'Burnside's bridge' .... I really must dig out those videos I filmed on the 2003 Historicon tour ... 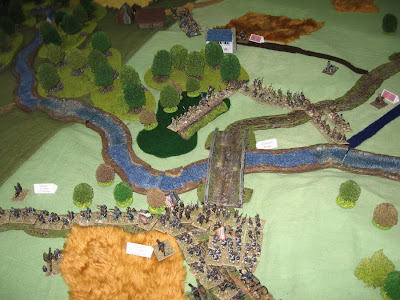 (Antietam - Burnside's bridge)
That said, this blog is mostly about ancients.

So I was very interested to see, just across the aisle from us, the Malvern guys and their Arthurian themed 28mm Armati game. Armati is like that: just when you think you've met everyone that regularly plays the game, up pop some more. Of course, though the Armati League, I'm most used to seeing the game played in 15mm, and found, doing a vast Boudicca's Revolt game for English Heritage's History in Action, 28mm a difficult scale to get satisfactory visual results with. So it seemed strangely unusual to see the game in the larger scale. Kudos to them for putting it on, of course, and it's always nice to see Armati at a show. 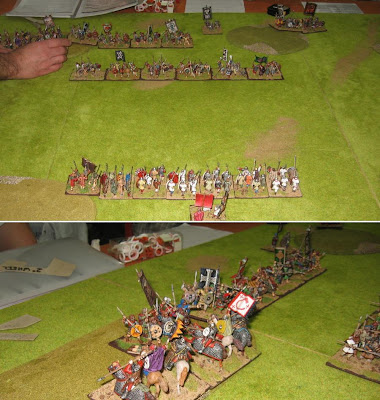 There was much more to see of course (see the banner collage at the top of the page) - doubtless most of the glossy space will go to the colossal Blenheim game in the main hall. Actually, I took some photos too, because it was impressive in its own way. If all static display games were as good, I might have more time for them. Mostly, these days, they seem to be sponsored by the people that make the figures, of course ...

An excellent weekend. Many thanks to all the people who dropped by and the volunteers who made the Society stand a relaxing place to be based. Although we only ever had three or four people on hand at any one time, I made 10 member/volunteers who rotated their way on and off the stand or game over the weekend. Volunteering like that is what make the Society of Ancients work well. If reading these blog entries makes you want to volunteer, contact the Secretary or put a comment on the blog (I'll get back to you and we should be able to fit you in ...)... 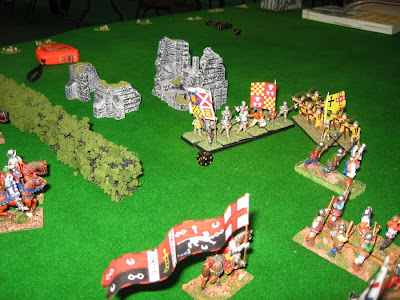 (flying a banner on the Society stand)
Posted by SoA Shows North at 11:33 AM