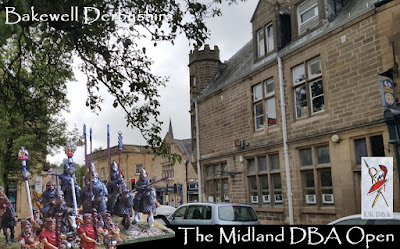 So off to sunny Derbyshire for Round 8 of the SoA sponsored UK DBA League, the Midland Open.

As it says on the tin, it's an open tournament so you can take any army.  In some respects, that makes choosing more difficult - in default of something 'interesting' to sort out, I usually use these decisions as a way of spurring me to finish something or giving something new a run out.  That might have meant topping and tailing those Thebans.

Then I realised that although I'd prepared some Early Imperial Romans for Tarrington last year, they didn't get used.  As a result of the traffic incident, by the time I was ready to take over my berth, we were already up and running using Martin's reserve army.  So the EIRs were still sat in their box waiting to be played with.  Easy decision. 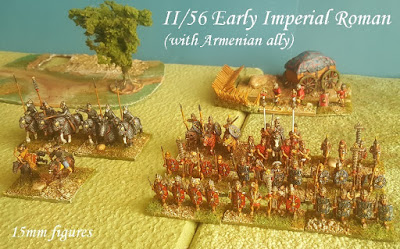 ... and, indeed, on they marched ... with their world conquering aggression of 3, these determined footslogging Romans invaded all day ... India, Africa, Spain, Asia, Polynesia ... thank goodness for the hardy Roman marching boot!

But I'm skipping ahead ... We got stuck on the M1 because of the usual difficulties some of our species seem to have all going in the same direction in marked lanes (without colliding with each other)* so for round one I played my travelling companion Patrick and his North Africans ...

Patrick defended but ended up with too much terrain on his side of the table. It was a good game but the Muslims were always on the back foot ... I'm thinking about using a littoral army at Britcon so I do need to think about how the Waterway cuts the table down (or doesn't when you are invading a non-littoral, of course) ...

Anyway, things were going well, so it was off to Cappadocia next. 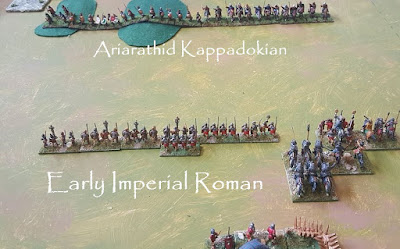 The Ariarathids seem to be a popular army at the moment - Knights and Auxilia.  I struggled to win a combat against them, that's for sure.  However, the game will be remembered (by me, anyway) for the incident where I actually spent the 2 pips to move a Camp Follower out of my camp - and jumped on the flank of one of those Kappadokians (which was otherwise relentlessly driving my Armenians back across the battlefield) ... 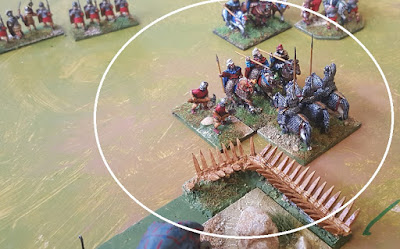 I won the ensuing combat and rescued my cataphracts.  I always make separate Camp Follower elements for my DBA camps but, inevitably, seldom do they ever do anything.

So this was that rarity ... the opportunity (check), then 2 spare pips to use it (check), and then a win in the combat (even rarer, but 'check') to get the pay off.  It'll be some time before all of that comes together, I'm sure!

So it was looking like I might be on a roll.  In configuring the army, I took the Armenians to give that extra cavalry punch and to deal with all those pesky 'fast' Blades that seem to be the fashion.  Elephants?  Well, I eschewed any Psiloi, so the Auxilia would have to deal with any elephants!

And so it turned out ... against the Tamils, despite being down on the factors, the Auxilia got in enough combat rolls to pull out a couple of sparkling ones and bagged two of the elephants (one of which had a general on top!) ... and against the Celtiberians, the cataphracts managed to combine with the foot to give the edge in a largely infantry battle. 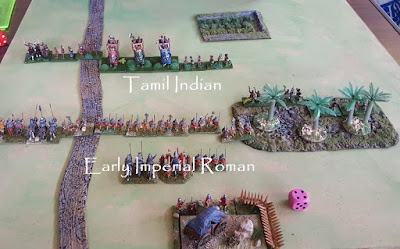 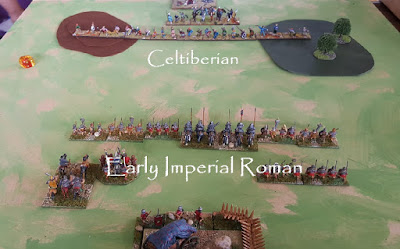 (Midland Open 2019: the Romans will reign in Spain)

None of this was a forgone conclusion.  With an Ally in the mix - especially where it might need to mesh with the Roman infantry - you need enough pips (as they have to be commanded separately) ... and to get your desired outcomes, you do need to win the combats (especially, say, with Auxilia tacking elephants - OK, it's their job, but it isn't exactly 'Mission Easy').  So the dice have to be with you. 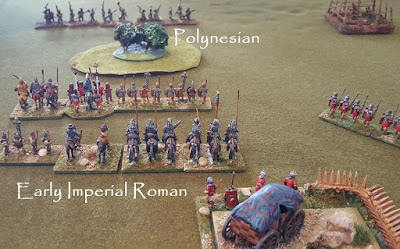 But I couldn't take the last game against Pete D's Polynesians ...  even with 3 elements destroyed and the (hopefully) 4th flank-lapped.  I couldn't win the combats and the game ended drawn.

And so on a day when everything seemed to be working, I ended up first equal ... then on count-back (sum of enemies' points scored) second.  So, after a bit of head scratching, it was well done to the other Phil.

A great finish to a day that had had a seemingly unlucky start.

And a vindication for the combination of Romans and Armenians.  I seldom use allies but it worked in this instance. 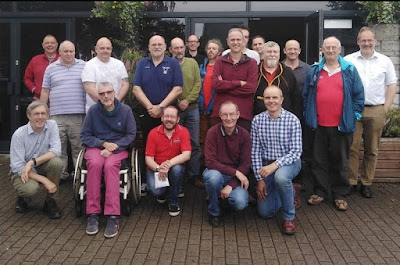 *it has always seemed straightforward to me (pretty much both straight and forward, indeed, so what could possibly go wrong?) but other drivers do seem to struggle - after we got free of the first accident, we passed another, with cars spun around, just a few miles up the road.  I don't want to jinx myself so let's just leave it there ...
Posted by SoA Shows North at 1:53 PM