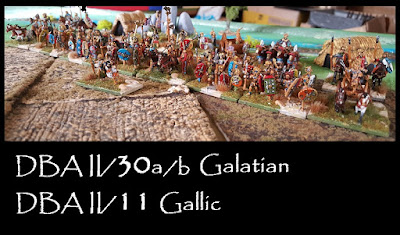 So he we are ... although they have been pressed into service already, finally (almost*) it is time to put the Gallic project to bed.

This army, almost entirely old Donnington Miniatures, was donated by the very generous David Constable, one-time organiser of the Midland Open, who, having finally decided to hang up his DBA boots, shared his collection out amongst the UK DBA fraternity so that finished armies would still get to fight and (hopefully) unfinished projects would get completed.

As the Telamon BattleDay was coming up, I took a completely bare metal Galatian army - which I have subsequently referred to as Gallic Galatians.  There is a massive overlap between Book II's lists 11 and 30.  The main difference being 11 gives you a choice of 3Wb or 4Wb (30 is all 4Wb).  And if you choose solid warbands, the lists are virtually identical. 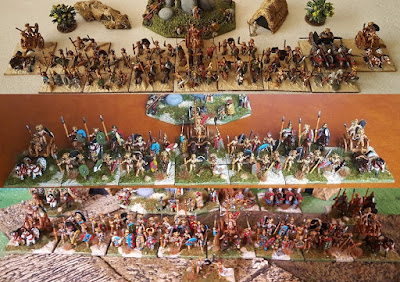 There is also more than a touch of nostalgia to the army - and its classic but still beautiful Donnington figures: one of the first 15mm projects I did was, 30 years ago, a Conference game of Hannibal crossing the Alps.  Fellow Slough Barbarian, Ken Warren, kindly lent me a Galatian army using these same figures.  It was splendid and I really appreciated the loan.  After 30 years, and on a DBA level, I now have my own.

So the spur was Telamon.  I have to confess a. I'd always though of the Gauls at Telamon as more like Galatians because of the notable presence of so many naked warriors (the Gaesati) - and also I'm open minded on this whole fast/solid thing.  I'm not sure that there's a great wealth of evidence suggesting that the Celtic peoples really fought much differently wherever their migrations took them.  And once upon a time, they were all just Warband.

In addition to providing the ranks for Telamon, II/30a is the perfect pairing to fight the Thebans. 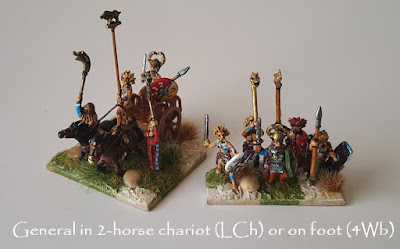 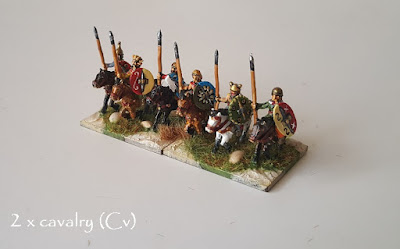 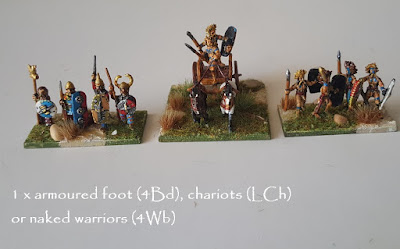 (DBA Galatians: figures mostly Donnington with some new Chariot on the left) 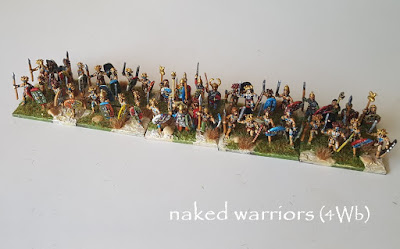 There are a number of options and morphs in II/11 and II/30 a and b but 10 bases of warriors covers most of them.

This last phase before finally doing the gallery has been for me to do shield designs, woad tattoos and put reins on the chariots.  That didn't stop them fighting in the Telamon games, but I am pleased with the finishing touches*.

*that said, and notwithstanding the word 'finally' in the opening remarks, I think some of the woad could be more convincing so I fully intend to go back and do some retouches at some point.  Nevertheless, I'm still counting these figures as *done*.

(player's eye view of the Galatians)

Some of the shields are facing behind so here's a back view.  I'm quite pleased - the large central rib makes the job quite tricky/absorbing in 15mm scale. 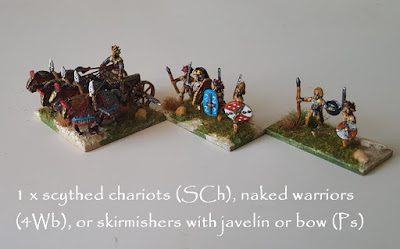 The scythed chariot was fun.  Unlike some, it does just about fit onto a standard DBA base.  Although NB if this inspires you to buy a scythed chariot from Donnington, I have done some 're-engineering' to tighten the whole thing up.  I've also converted the driver to a Galatian.  And added reins.  Here's another look. 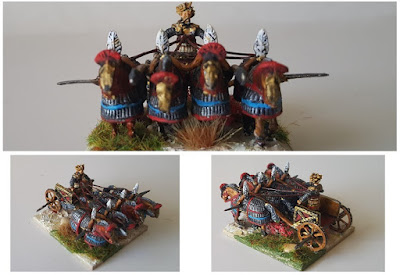 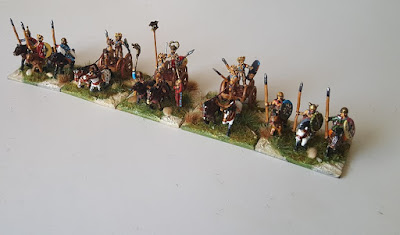 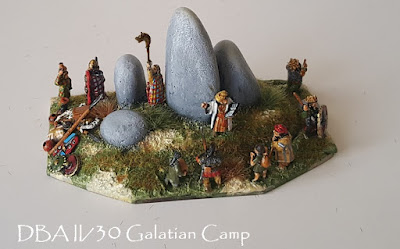 This is a hybrid inspired by Asterix comics mashed with the fact that every time I looked up 'Galatians', the internet gave me St Paul preaching ... so here is some (non specific) Eastern cleric (a New Donnington figure) preaching to a Mediterranean/Celtic crowd amongst some standing stones.  It does have some military gear stashed 'camp-like' to the side. 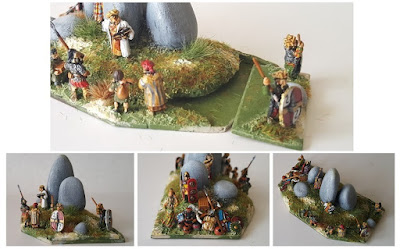 At Telamon, Polybius describes the Gauls (seemingly) securing their flanks with chariots and wagons.  To me it sounds more like a 'War Wagon' than a Light Chariot deployment so I made the 'wagons and chariots' WWg ... it worked quite nicely.  Mostly I used the normal chariot vehicles but included one of these ... 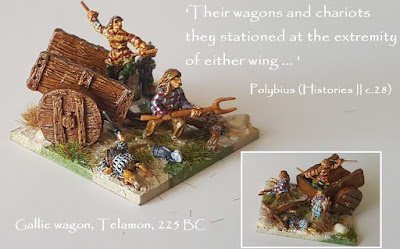 This army pairs with Theban or Marian Roman amongst others.  It is a very versatile army to have, truly a mainstay of the Classical world. 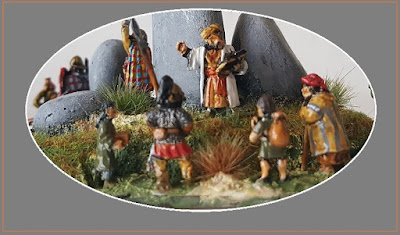 Another excellent army essay, thanks Phil. Some great ideas here. I particularly like the general with extras. My own Gauls are finally painting table having languishing in the painting queue for far too long. Purchased some years back they were supposed to be ready for a refight of Telemon this year, but I was distracted...

Thanks Keith ... hopefully some inspiration, then - I always get a sense of achievement when something long in the queue finally gets done. Britcon has a restricted theme for the DBA day his year and I fancy Bosporan. I have had a Saka/Scythian/Black Sea Greek army that I bought years ago to paint for Armati. Those wonderful Falcon Figures that went out of availability til Lurkio recently revived them. Well, I've enough figures to do Bosporan and as Scythian or Alan enemy for it and that will be another long overdue project mopped up. It's a commitment! You heard it here first!