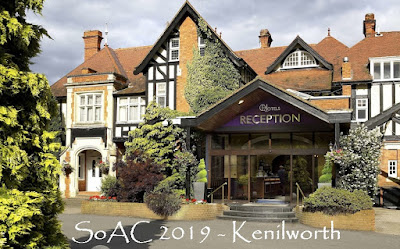 In which the Shows North 'on the move' blog shifts to Kenilworth for the annual Society weekend:

The 2019 Society of Ancients Conference

This was probably the last time at the current venue, Chessford Grange ... excellent for a number of reasons (less than ideal for others).  It will be going out on a high.

This report will have more than the usual number of pictures as I participated in a number of splendid sessions and wanted to do them justice.

But after a Friday evening of pick up games, board games and chats in the bar, Day One began with a talk by Mike Ingram. 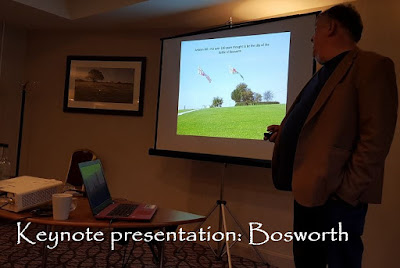 There was a preamble by me on why you need to abandon all your old books on Bosworth and base your interpretation on someting written since the 2009 archaeological survey.

Basically, 200 years ago, an influential antiquarian moved the battlefield to the wrong location based on local anecdote but no facts or artefacts ... 10 years ago, a major archaeological survey was commissioned by the Battlefields Trust which - after a lot of searching - finally found unquestionable evidence of the location ... and strangely the location ties in with references on early maps etc. before the late 18th century shift to the wrong location ... (in a nutshell)...

Bosworth is the 2020 BattleDay topic and the single biggest challenge Richard faces will be to get game designers to abandon their old Osprey and L&L Soc books (which have fictional reconstructions tied to landscape features that are not on the battlefield) and embrace the new, much simpler story of what unfolded on the flat land straddling Fenn Lanes (no Ambion Hill on the real battlefield). 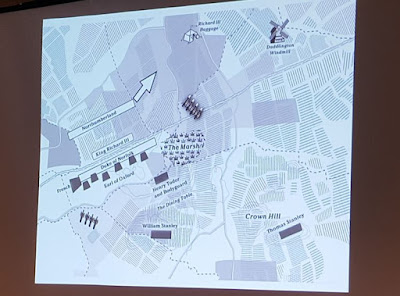 (the real Bosworth: the penultimate phase as seen by Mike Ingram: the French engage while Northumberland departs - Richard now needs to make a decisive intervention)

Mike went on to explain the campaign, orders of battle, troop origins and probable weaponry etc.  The likely deployments (as given, at least, in the contemporary accounts) and how these led to Richard's downfall.

He also explained how Bosworth formed part of overt French foreign policy - and only really happened because the French (or Madame, at least) decided it was time to intervene.

If you are interested, Mike's book is available on Amazon:  Richard III and the Battle of Bosworth

Anyway ... great talk.  Other presentations included Harry Sidebottom on 3rd Cent. Rome; Graham Evans on the Battle of Edgcote; Simon MacDowall on the Goths and Matt Bennett on William Marshall and Medieval Tournaments.  That's a great line-up in itself

This Weak Piping Time of Peace 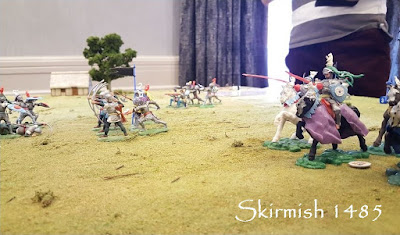 Simon's game was actually quite quick to pick up and rattled through a couple of actions that resulted in my Richard III being able to charge and topple the upstart earl of Richmond.  Good stuff, then. 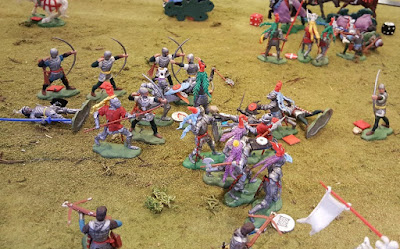 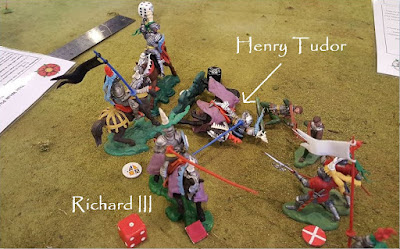 The mechanisms were quite (shall we say) 'traditional' but had a lot of merit and might well have been a good way to do the tournament game that followed after lunch ...

In no particular order, here's a collage of other games going on ... 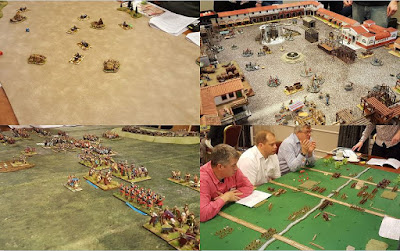 (Chariot warfare, Gangs of Rome, Adrianople - To The Strongest - and Sumerians) 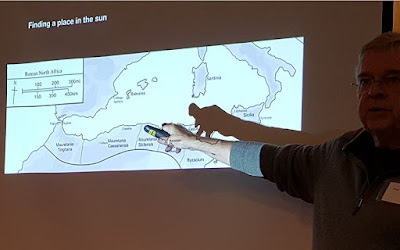 Then Matthew Bennett gave a brief appraisal of the Norman and Medieval tournament scene and the deeds of William Marshall.  Followed by game in which bands of Knights and men-at-arms picked fights with each other to win money. 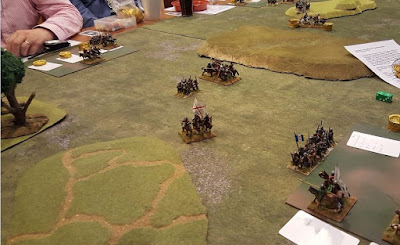 (Medieval prize fighting: the tournament ground was more than just a tilt yard) 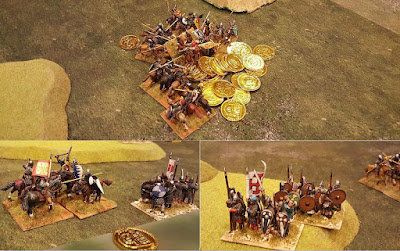 (some of the players put their heaped winnings on the table) 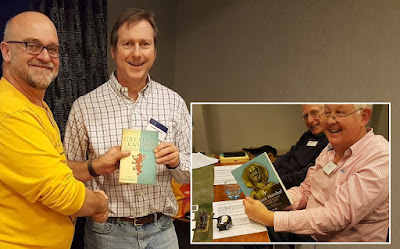 (to the victor the spoils)

As a surprise to the players, punctuating each flurry of combat, Matt awarded a prize (books about the Marshall) to the player topping the money stakes at the time.

This year, academic, author and wargamer, Harry Sidebottom gave us a fascinating look at Rome's forgotten era - the third Century AD.  Valerian being made prisonner by the Sassanids; appeasing the Germans; fighting for the Imperial crown, Civil War and fragmentation.  Rome, said Harry, repeatedly sowed the seeds of her own eventual fall. 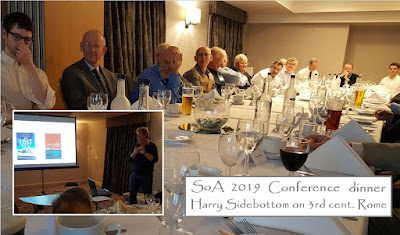 I was fascinated by all this as it addressed the unmentionable: even a great, classic guide like Warry's Warfare in the Classical World follows the military history of Greece and Rome though, epoch by epoch, until the age of Augustus (around 1,000 years in just under 200 pages) then wraps the whole story up in a couple of chapters (500 years in less than 30 pages): not a lot, given how profusely illustrated the text is.

Harry gave a flavour of how rich the missing stories can be. 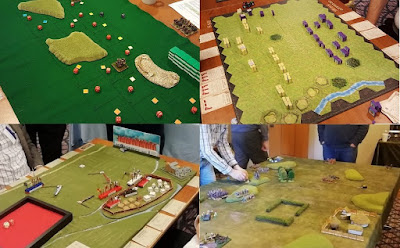 (more games from SoAC 19 ... Mongols, Commands and colours, Northampton 1460 and Rome on the march)

My contribution to the late entertainment was what I expect to be the final run at Telamon - the 2019 BattleDay feature - with the current version of DBA (V3): this time 'Big Battle' DBA. 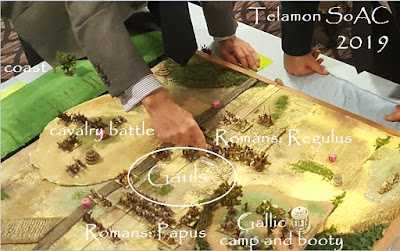 (BBDBA at SoAC 2019: Papus and Regulus trap the Gallic host) 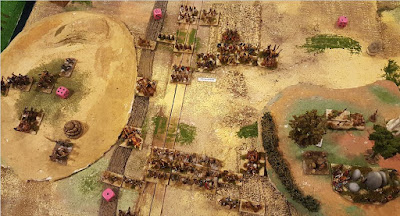 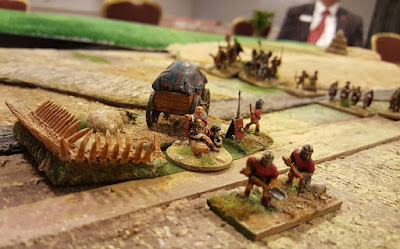 (Telamon at the Society of Ancients Conference: part of a Roman camp)

The game was hard fought but, on both fronts, the Warband inflicted frontal losses on the Romans.  Eventually the Gallic prowess (aka luck) in close combat demoralised all three Roman commands.

This was the most decisive win in a series of games in which the Romans have generally been victorious.  Indeed, previously, it had been looking unbalanced. 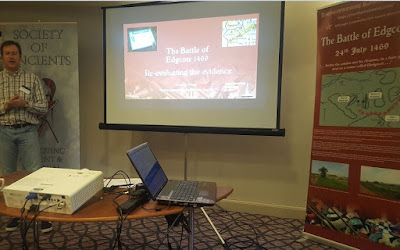 Sunday kicked off with Graham Evans talking us through the evidence for what happened at Edgcote in 1469 (NB, again, Wikipedia is useless on this battle), re-evaluating the evidence and making sense of it (such as, e.g. it was fought on the 24th July, very clearly not on the 26th) ...

... followed by a 4 player run at our reconstruction of the battle with 28mm Foundry figures and Hail Caesar rules. 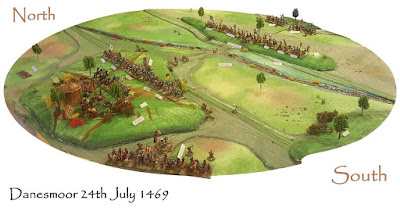 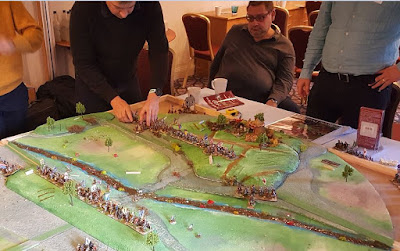 (Edgcote at SoAC 2019: an eager earl of Devon moves his archers onto the battlefield)

In this playing of the battle, an eager Humphrey Stafford (earl of Devon) was quickly up in support of Pembroke's Welsh array (i.e. good early command rolls).  Meanwhile, whilst holding most of the line on Edgcote Lodge Hill, William Herbert (earl of Pembroke) sent off a party of mounted Men-at-Arms to ride around the rebel left. 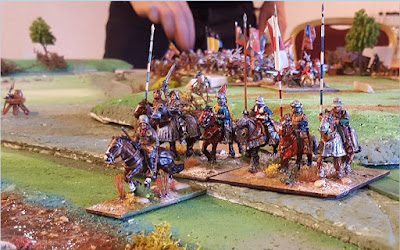 (Pembroke had the part of his force mount up to outflank the rebels.  He chose not to lead it personally)

Once he had taken a few hits from the rebel archers, Herbert went in hard on the rebel centre, cutting down Robin of Redesdale.  3 times, Robin was hit.  Twice, he popped up somewhere else.  Meanwhile, first Richard Herbert, Pembroke's brother, was killed in the melee, then the earl himself was cut down and captured.  Nevertheless, the retinue around them, well-harnessed - the best men in Wales - fought on, undaunted. 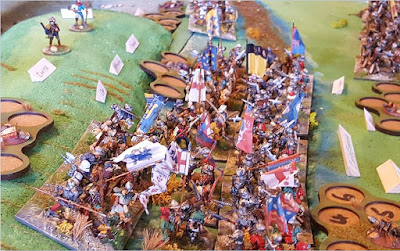 (Edgcote at SoAC: the battle for the centre)

The Conyers contingent broke and fled. 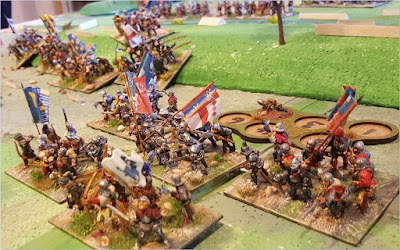 (Edgcote at SoAC: despite the loss of their leaders, the Herberts chase the Conyers from the battlefield)

The rebel reinforcements (Gates and Parr) eventually collapsed but not before repulsing the cavalry attack and breaking Herbert's main battle (leaving just Herbert's own, now leaderless, contingent hacking at the fleeing rebels).  At the same time, the main rebel battle broke and the battle was won.  By Humphrey Stafford. 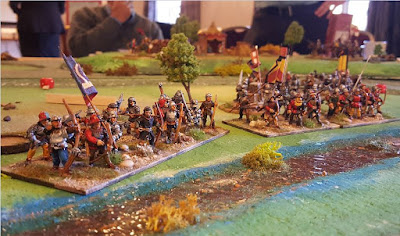 (Holding the field of Edgcote at SoAC 2019: Humphrey Stafford, earl of Devon)

So .. a result we had not seen before ... We rolled dice to see whether Herbert's men were able to recover their leader (who had fallen captive earlier in the fighting) but the dice said he was dead.  Likewise Robin of Redesdale, though it had become unclear who, indeed, was Robin of Redesdale.

The Welsh will mourn the loss of the Herbert brothers but King Edward will be pleased with the recently appointed earl of Devon.  So not quite what really happened.

After a roast lunch and the Conference wash up, those with further to travel started to take their leave.  I had less far to go, and with my work for the weekend done, I settled down to be a player in one of the final sessions: a 6mm Hydaspes using Hail Caesar.

I thought this would be useful and entertaining as, with the Edgcote game, I pretend to know my way around HC these days.

This Hydaspes game is the one run at the 2015 BattleDay. 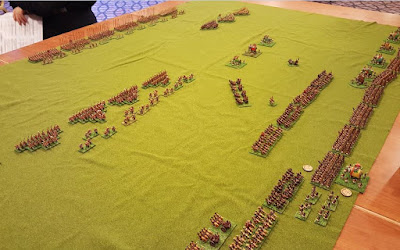 Great panoramic battlefield but, ever trusting in my mobile phone, I tried a gratuitous close-up (which I think flatters both the phone and Pete Berry's figures) ... Click on the picture for a better view ... 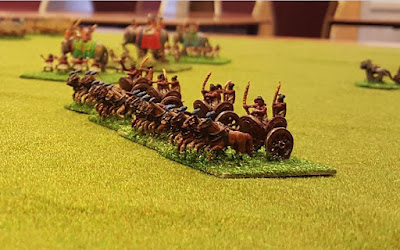 It was a very grand and formal affair (lots of units and lots of space) compared to my shambling medieval methodology - and it was useful and entertaining to get to use the mechanisms 'properly'.

I commanded the left wing of the Indian array and although the wargame, as wargame, still had plenty left to run, we wrapped up when Alexander rescued his shattered Companions one too many times and succumbed to the dreaded death roll. 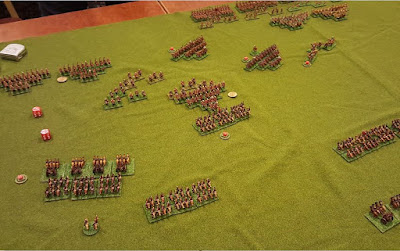 (Hydaspes: the Indians heap pressure and misfortune on Alexander)

All in all, a great weekend and an event the Society of Ancients can be proud of.   We explored Ancient and Medieval warfare with talks, boardgames and figure games (and over pints in the bar) ... we wargamed from Ur to Bosworth, from the heart of Europe to India and the Asian Steppe ... and with figures from 6mm to 54mm (and with commercial rules, self-published rules and experimental homegrown mechanisms).  A truly representative mix.

Thanks to everyone involved - I am looking forward to next year and a new venue.
Posted by SoA Shows North at 10:29 PM

Great report and it looked like a wonderful event which I am determined to attend next year wherever that may be.

Very nice. I especially liked the last report of a Persian victory. Hurrah!

Thanks for commenting, guys ... I believe the new venue is near Cambridge and looks better in a number of ways than Chessford. Fingers crossed.

The next big Society event, of course is the 2020 battleday - which, as previewed in the blog post, is Bosworth.