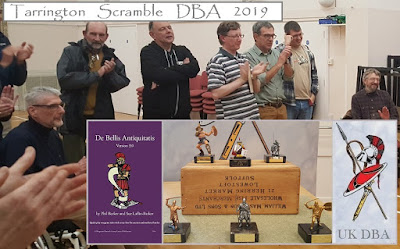 After our weekend in Kenilworth, the following Saturday saw us head off towards the Welsh border for the first round of a new Society of Ancients sponsored UK DBA League season.

This event uses the scramble format ... everyone picks/takes their army but, mostly, the army you play with is drawn randomly from a pool of everyone's submissions.  But (a) you fight against your own army the first round; (b) you fight with it in the last round; and, (c) in between, you will always get a different army and it won't be your own.

Further, the terrain selections come as part of the package.

I particularly like this last aspect as it allows the 'thinking' of the army to be complete.  I also think it speeds the set up ... it is difficult enough to hit the ground runnig with an army which might be completely new to you.  Being defender and having to choose the terrain modules as well would be a lot to think about. 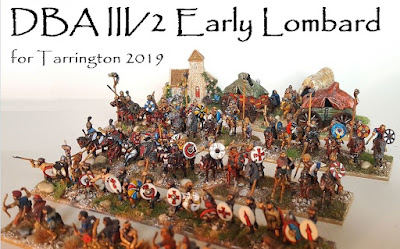 I decided to go with Early Lombard as I was looking at needing to refurbish the warbands and updating the photographs ...

That, and I thought it would be a solid sort of an army that I knew how to play with.  Tarrington requires that you specify before round one whether dismountable troops will fight on foot or mounted (and then everyone has to follow that choice): the 4 'follower' knights can dismount as warband (so I opted to define them as infantry). 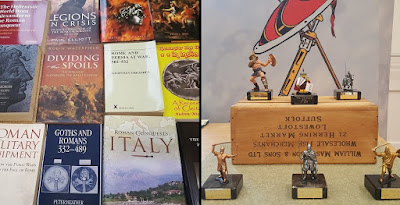 (Double prize fund ... books (left) offered in reverse order ... trophies for the players and their armies)

Armies I fought with and against over the six games included Dacians, Hyksos, Irish, Early Achaemenid Persian, Tuareg, Midianite and Khazar.  And Lombard. 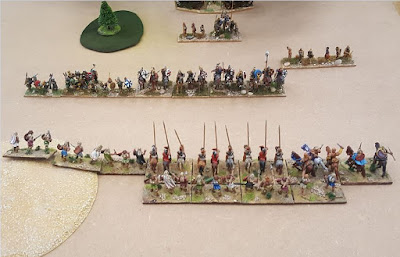 (Baptism of fire ... taking the Dacian/Sarmation combo up against my Lombards) 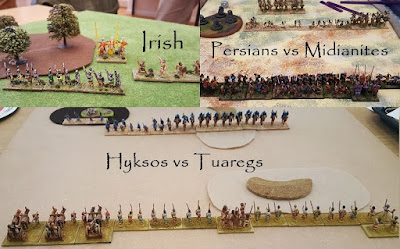 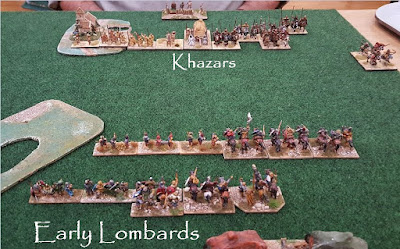 (Tarington 2019: with the Early Lombards against the Khazars ...) 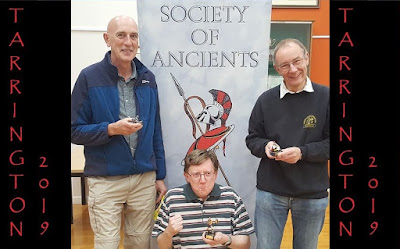 (Tarrington 2019: prizes for the best and worst armies plus the slayer award for the player with the bloodiest games)
Surprisingly, I won all six games, and so won this round of the UK DBA League.  I was able to beat the Lombards in game 1 and win with them in game 6.  And I got the lucky for the games in between.

Actually, I'm surprised how badly the Lombards did (13th out of 16 scoring only 7 points all told, 3 of which were mine in the last game): then again, I was lucky not to have to fight Tuareg with it.

The top scoring army was Papal Italian.  The most challenging was one of the two Tuaregs (the other tuareg did quite well so don't read too much into any of this) ... 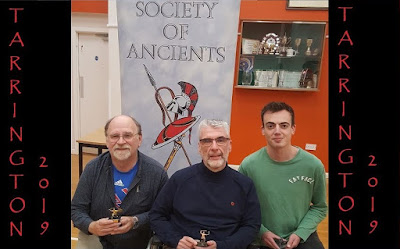 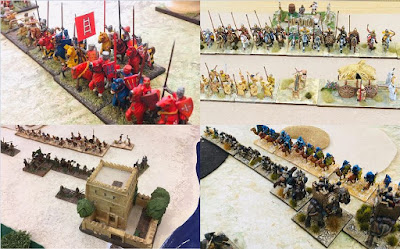 (more armies from the Tarrington scramble credits to Martin Smith)

So, another UK DBA League season begins.  Tarrington is a great event and a special challenge.  Well done Martin for putting it all together.

On a broader note, I know the players would like my to register our thanks to the Society of Ancients for their continued support of the League.  It brings people together and that is much appreciated. 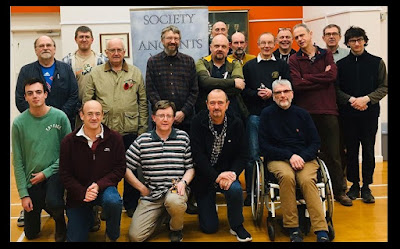 (Tarrington 2019: the 'players and umpire' publicity shot)
Posted by SoA Shows North at 2:20 AM