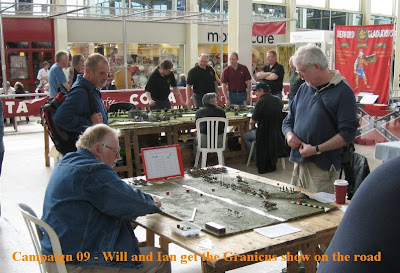 (click on the images to get a bigger picture)

For Campaign this year, regular contributor Graham D Evans suggested an ambitious but tempting project to follow his successful Trebia game from last year. (Look back ...) 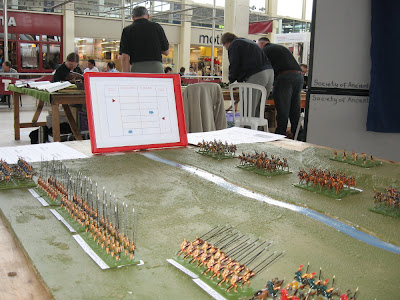 (Sunday scoreboard in the background: Alexander ahead 7:1 on the Granicus table; Hannibal behind 3:4)
Convinced that Neil Thomas's ancients game is the way to go for a participation game at a show ... and wanting to capitalise on how well the Trebia game worked last year ... the 2009 idea was to run Alexander at the Granicus alongside the Hannibal game, and offer participants a choice - we supply the other side, they get to try their luck as either Hannibal or Alexander. Graham promised to complete an extra board and manage a series of playtests if we would put the bodies around the table. 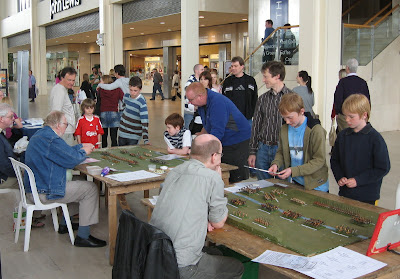 (Will mans the Trebia table, Graham mans the Granicus table)
Superficially, the two battles seem quite similar: both coming early in the commander's great campaign (had either been defeated the career likely would have ended early), and both featuring river lines. Much of the similarity stops there, of course ... Granicus does seem to have been a decisive victory for Alexander, whereas the outcome and impact of Trebia might be argued - the Roman centre is victorious and drives its way off the field (an ominous portent - for both armies, perhaps) .. and awesome or not, it is also the last we see of the elephants Hannibal so painstakingly brought across the Alps. 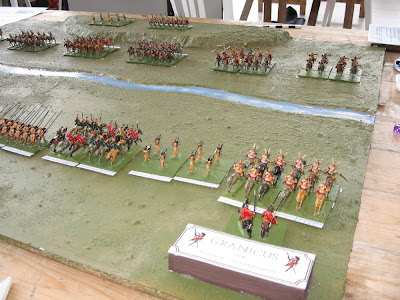 It has to be said the wargames rather ran to that pattern also: the Society team (seasoned wargamers or not) were hard pressed to get much out of the Granicus for the Persians, and their cavalry heavy army struggles either to defend the river or cross it in the face of superior heavy infantry; at the Trebia, however, the onus is more on the Carthaginians - Rome's heavy army and competent legionaries are hard to beat whatever the circumstances ... so Hannibal needs to get an edge quickly and (see last years notes) get Mago into the action pretty quickly. 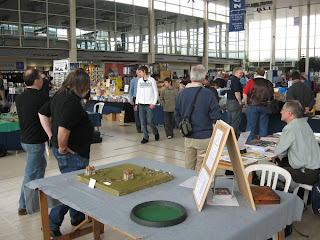 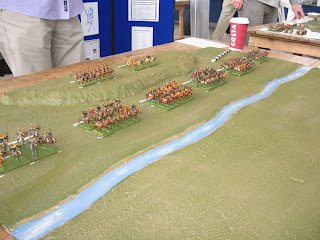 The results show those characteristics .. Alexander well ahead throughout, but with Hannibal neck and neck with the Romans and, Trebia table regular, Will (ever waving a sword for the Romans) determined to see the invaders off! We hope, of course, that wargaming was the winner - certainly we managed to keep both games running almost simultaneously throughout the weekend, with most of the Great Commander players being complete novices, and that was a big part of our objective - and a big part of why Campaign is a public event in Central MK.
Posted by SoA Shows North at 6:18 PM