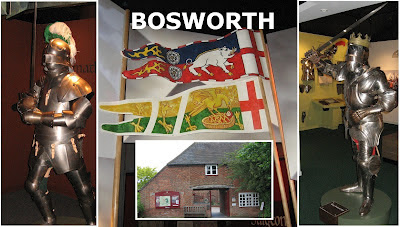 This was my first visit to Bosworth since Glenn Foard's surveying work sponsored by The Battlefields Trust.

I am working on a new DBA scenario for the battle and Mike Ingram, whose new book is just out, was guiding a study day/visit.  'Bosworth 1485', in the Battle Story series is a project built on the new work done at the battlefield, and deserves to be the new orthodoxy (at least until we get a planned publication from Glenn Foard and Anne Curry next year ...)...

There is still quite a lot to enjoy in the Visitor Centre exhibition, and most of the battle narrative is still valid (just it happened somewhere else) ... plus there is a new section on battlefield archaeology and on locating the field. 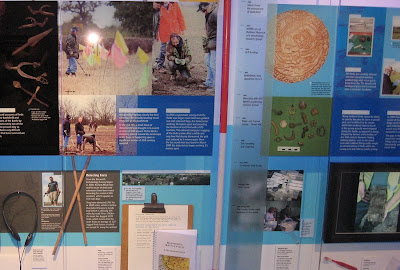 Analysis of historic place names (especially along Fenn Lane) combined with soil samples to identify a probably battle site that matched well with contemporary accounts like that of Polydore Vergil.  Surveying and digging brought up significant and plentiful finds to confirm this location.  In particular, large amounts of shot were found, possibly validating the presence of large amounts of artillery on the field.

(up on Ambion Hill - the party surveys the traditional site)

Richard's baggage was probably camped at White Moors and it is very likely men from the large force were encamped across the area including on the high ground at Ambion Hill (the traditional, though never convincing, site).    Richard was forced to deploy on the flat low ground around the Roman Road as the earl of Richmond, Henry Tudor, closed upon his position. 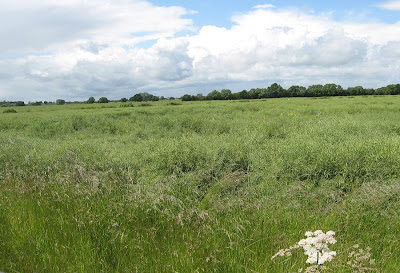 (Richard's Army deployed in these fields in 1485)

Much of the area across from Fenn Lane was marsh in the 15th Century, and Henry deliberately chose this avenue of attack to take advantage of the marsh - which would likely nullify Richard's potential advantage in cavalry and his large array of ordnance. 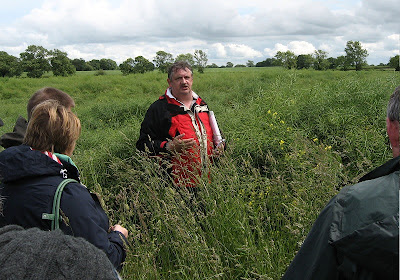 (in front of the contemporary marsh, historian Mike Ingram interprets that battle)

As many of the party were heard to comment, the site certainly looks and feels like a battlefield, and it is easier to reconcile with the reports of the eyewitnesses. 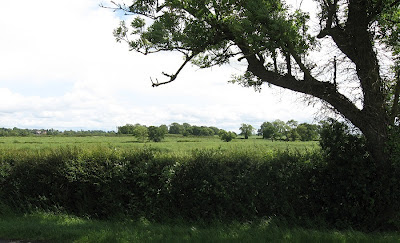 (the rising ground towards the horizon in front of Stoke Golding is where the Stanleys drew up, unresponsive to Richard's command)

As many readers will know, gaps appeared in Richmond's line as his hard pressed troops clustered around their standards.  Richard saw his chance to settle the issue and charged forth seeking a decisive action with the rebellious earl.   Decisive it proved, though not as Richard would have scripted it.  The Stanleys responded, but joining Richmond and engulfing Richard's band.   Tradition has it that he was driven into the marsh and met his defiant but ignominious end. 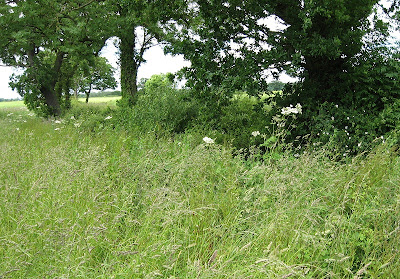 (here, Richard met his fate, and 331 years of Plantagenet rule in England came to an end)

A very worthy and informative visit.  I understand the battle and the landscape more surely than I did before - and, as currently interpreted, the narrative is certainly coherent and convincing.  Recommended.

The marsh will play a very important part in my reconstruction, and it hard to see how this could be a battle fought from a free deployment - if Mike's narrative is followed, the lack of time to prepare a position meant that the artillery, always in the rearward would naturally fall into the line on the left, opposite the marsh, just as Henry intended.

My thanks to all involved for their help - see Bosworth on the BFT stand at the Festival of History ... 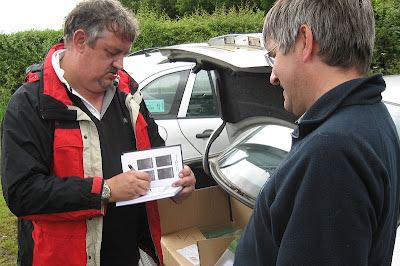 (Mike signing copies of his new book at White Moors car park where, appropriately, our baggage was drawn up for the battlefield walk)

In 2005, the Battlefields Trust was commissioned by Leicestershire County Council, with funding from the Heritage Lottery Fund to investigate the probable location of the battlefield.  Professor Anne Curry and Dr Janet Dickinson reviewed the documentary evidence;  Dr Mark Page, Tracey Partida and David Hall worked on reconstructing the historic landscape;  Professor Barrie Cox worked on the early names.  Rodney Burton worked on soil mapping;  Birmingham and Bradford Universities analysed the peat deposits to establish when areas of marsh disappeared;   Glenn Foard, Richard Mackinder and a volunteer team conducted a metal detector survey, Glenn, Richard Knox  and Rob Jabaway analysing the finds; and assistance was received in the final stages from Leeds, Cranfield and the Royal Armouries. 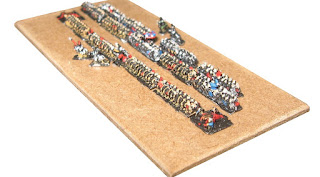 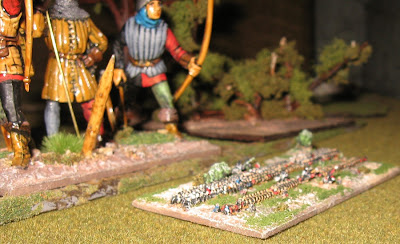 Labels: Battle of Bosworth, Battlefields Trust, Wars of the Roses 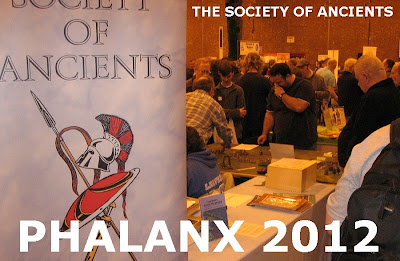 Seems like Phalanx is now the number one mid-year show in the North of England (almost the mid point between Vapnartak and Recon ...)..  and attendance this year seemd very healthy. 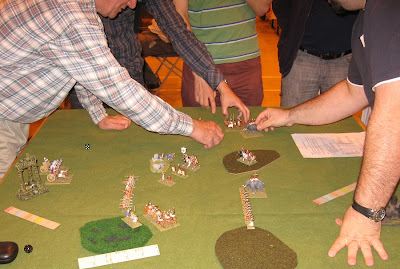 We had plenty of visitors, and took some new subscriptions - welcome! - which, judging by the purchase of back issues, were genuine new recruits.   We had the May issue of the new look Slingshot on the stand which drew more favourable comment.

I can highly recommend this friendly regional show - a lot of useful trade stands and plenty of games; many of the well known Societies attend (though this year,  the Pike & Shot Society had to withdraw in the last week or so, sadly); although they struggle with the numbers (a show 'norm' unfortunately) the food is wholesome, friendly and cheap; there is a well supported Bring & Buy, and the parking is free.

That is a lot of boxes with ticks in them, I think. 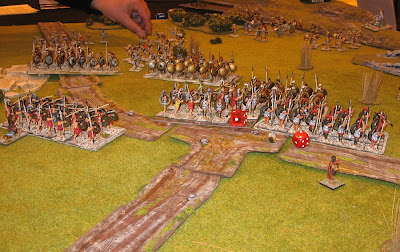 (some of the many hoplites at Amphipolis)

The main 'ancients' content was the DBA Challenge and Rob Broom's 'The Battle of Amphipolis' War & Conquest demonstration.

A highlight of the show, for me, was picking up a large bag of 54mm Irregular Miniatures Wars of the Roses figures.  These are for an upcoming 'Bosworth' DBA game following upon Mike Ingram's new book on the battle.   So I went along with a few demo bases - and came back with a project to configure, paint and deliver. 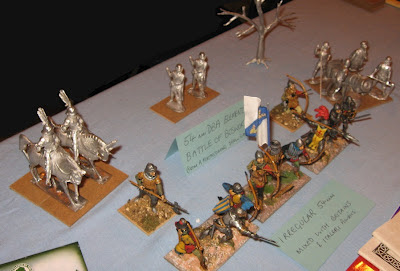 The figures will be mostly Irregular with some of my plastics mixed in for variety.  The flags and banners will be by Fluttering Flags.   Mike is helping me organise my understanding of the battle, and the first showing will be on the Battlefields Trust stand at Kelmarsh Hall.   Thanks to all for their support. 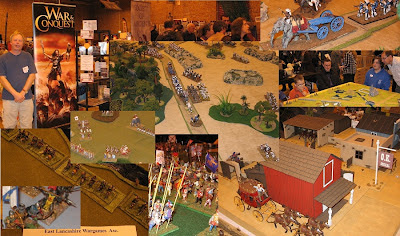 Elsewhere around Phalanx, the 'Late Medieval/early Modern' periods were well supported (the Lance & Longbow Society enjoying its usual good turn out, and Warlord's Pike and Shotte having stimulated much recent interest) ... 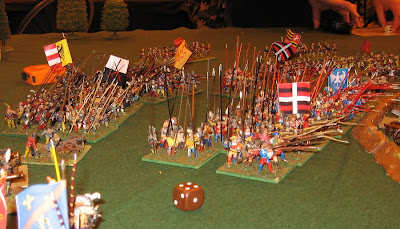 Next to the Society, a very engaging Sci-Fi participation game (it has a blue Police Box that seemed to have turned up in the middle of nowhere ... any idea what that's all about? ...) ... attracted eager attention through most of the day and generally the games presenters seemed to be enjoying a warm response from visitors. 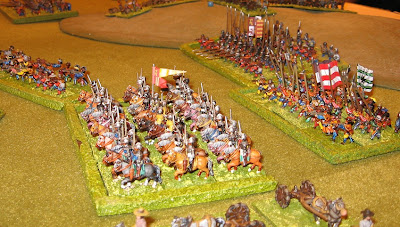 Phalanx is always a great weekend, as, courtesy of a locally based host, we enjoy a 'Gentlemen Pensioners' reunion, with a big game on the Sunday, and usually the chance to try other games like some of my DBA scenarios, over the weekend.  This year, Roy had some success with the Lords of the Nile game we have been doing at some of the other shows. 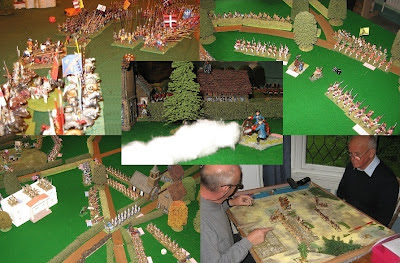 The big Sunday game was a Germantown scenario from the War for America, which, after something of a foggy start, turned out well enough for the British and eventually doffed its cap to the historical script.

Next outings should be to COW and to the Stoke Challenge.  Not sure what's happening at Britcon this year, however.

Don't miss out: join the Society of Ancients!  Membership here!
Posted by SoA Shows North at 1:13 PM No comments: 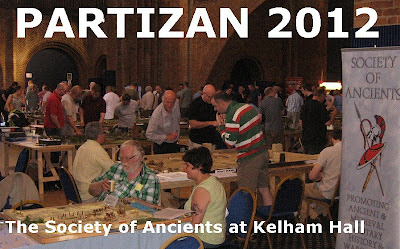 
A rare leisurely start for me this time, as, expecting me to be groggy from a college reunion on the Saturday evening, the rest of the Shows North team took the set up and morning shift (leaving me to stroll in after lunch, take some pictures, have a chat, and do the take down and return) ...

In addition to our DBA Lords of the Nile participation game, there were a number of other attractive ancient and medieval games at Partizan ... from big ships to small Dark Age contingents... (Medieval war at sea by Wargames, Soldiers and Strategy magazine) 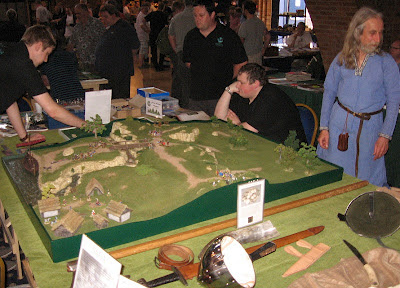 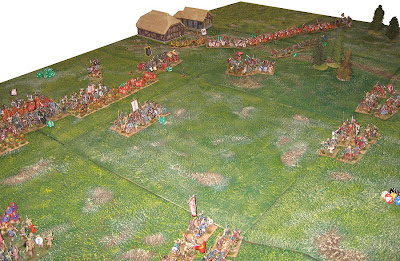 
I was great to see those Perry Wars of the Roses again - though it was disappointing to miss old Partizan favourites like PP and WD ... 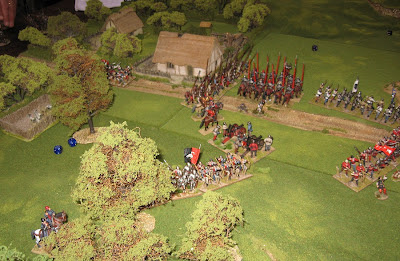 (the flight of Queen Margaret by the Perrys and friends) It was good to catch up with Phil Hendry who gave me a good walk through of his Augustus to Aurelian game which has now been published (Augustus to Aurelian) ...  Last Year I watched Phil and Richard C demonstrating the prototype, this year Phil puts the CD in my hand.

Actually, Phil did more than that, and showed me how it looks and works on his tablet reader/computer.

I confess myself impressed by this.  I am a book fan, and like the analogue reassurance of seeing the accumulated knowledge of my bookshelves - however I have always had a love/hate affinity with wargames publications (rules, supplements, revised editions and such): it is often so hard to distinguish between classics to treasure and tomorrow's chip wrappings (though, in truth most are probably the latter) ... 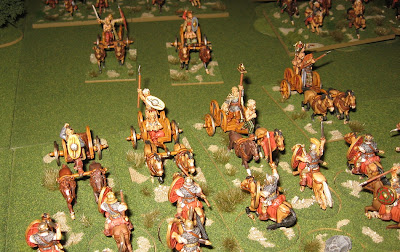 (a picture from last year's Augustus to Aurelian game)


So, looking at the tablet, I seem to see the ideal format for game documents: electronic publishing has given us a huge wealth of wargame material, so perhaps it will be no surprise if it turns out that electronic devices are the best way to store and display it.

Despite some losses to Triples being the week before, this remains a great show and a lovely location.  A big favourite this year was Heraclea Hail Caesar game ... 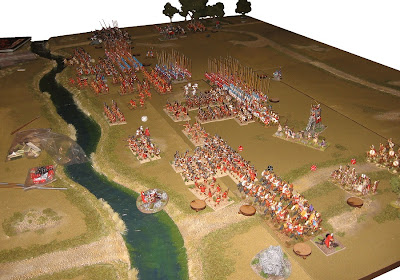 Perhaps my favourite gem of the weekend was out of our period, however:  I was really taken with this 42mm Franco Prussian game using Irregular Miniatures toy soldier style figures.   These bigger figures somehow seem to capture the spirit of an earlier age of wargaming. 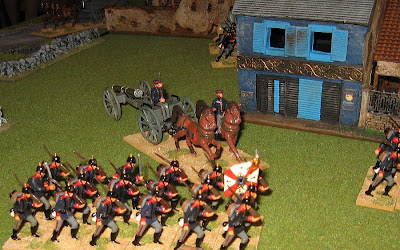 There was also an excellent Eastern Front game in back room (lots of trains and bombed stock yards etc.) ...

Thanks to Chris Ager, Will Whyler, Graham Sargeant, Dave Rose and Matthew Hartley for doing the work, and to the Lance & Longbow Society for being our co-exhibitors.

We will certainly be back for The Other Partizan - meanwhile, Phalanx is on the 16th of June.
Posted by SoA Shows North at 1:24 PM 3 comments: