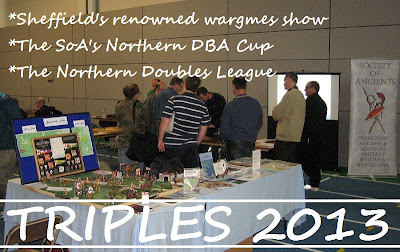 I seemed to be busy the whole time at Triples this year.   We had played both days last year, and had supporting manpower this year as well.   Tag-teaming the DBA meant I only played two games on Saturday (although FoG V2 did wipe out most of Sunday I suppose)

As well as great wargames show with every sort of game and all the big historical wargames traders, Triples, these days, is positively bursting with opportunities to play ancient and medieval wargames in low impact friendly competition.

The Northern Cup is sponsored by the Society of Ancients and is part of the SoA UK DBA League.

Tony and Paul from Lincoln organise it all and provide armies and terrain boards for a series of loosely historical scenarios.   This year had a Chinese theme.   Something I know nothing about. 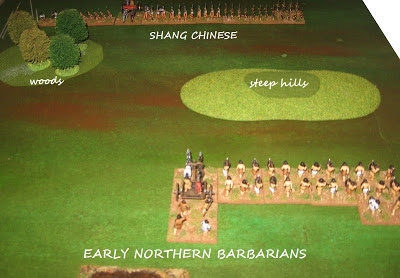 (Game one: Early Northern Barbarian - me, near us - vs Shang Chinese)

Some of the match-ups left me scratching my head, and I confess I struggled with the military challenges of unfamiliar troops fighting across terrain not usually found in the middle of my battlefields.

That is good in a number of ways ... but I didn't win any games for the SoA team (sorry, Chris) 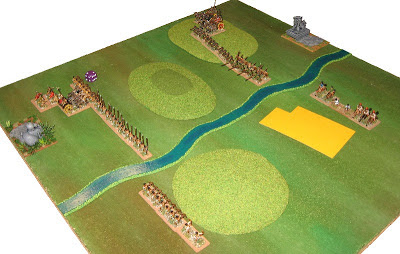 The battlefields are all preset, the attacker and defender are specified and the nature of the river is already defined (that river is a 'delaying river', so chops the battlefield in two) ...

I would normally have taken more photographs to add to the SoA/DBA gallery, but although I did like the look of the Samurai (and have bought a book by Stephen Turnbull), in general I have no affinity for this history and can't really tell which army is which :( 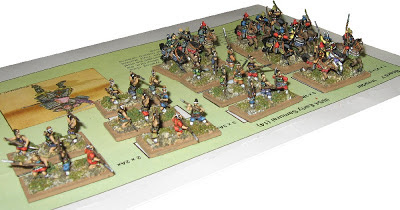 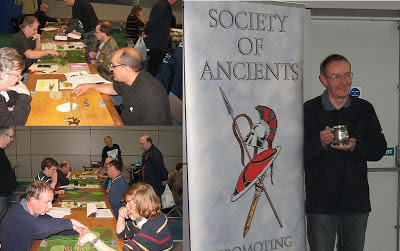 The gathered players expressed their thanks to the Society for its support, to the hosting show, and to Paul and Tony for putting it all together.

My 'out and about' sequence this week is just some shots of the Impetus tables ... 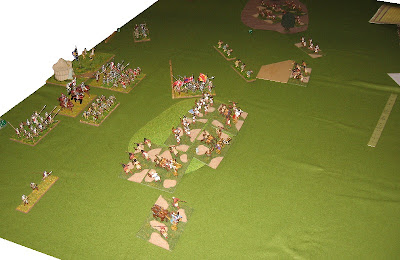 Unfortunately I was unable to photograph more of the Impetus event as due to some oversight somewhere, most of the games were being played on bare tabletops.  That was a pity as this is an interesting game, and some of the armies were appealingly presented. 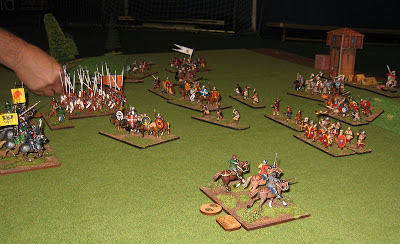 There was also a WRG 6th edition event, but they kept themselves very much to themselves for some reason.   A testimony to durability, however.  What a lot of choices we have these days. 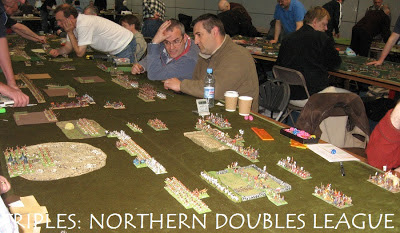 (the well-supported Sheffield round of this evergreen competition)

This is Colin and Geoff's last year running the series so I had hoped to play more often.
There is a round at the Royal Armouries in Leeds which would be great were it not for COW being the same weekend (but those of you not going to Knuston Hall ought to make a note in your diaries).

I was very pleased Chris agreed to using my Hawkwood Condotta Italian - it is a favourite army and needs to come out every year.

I had hoped that it might fair better under FoG V2 with the marginal boost to rear rank shooting at impact (no minus poa now for the rear rank archers/crossbowmen) - actually, I think the army loses much more from the neutering of skirmish troops than it gains from the impact bonus ... so it remains more a decorative than a competitive army. 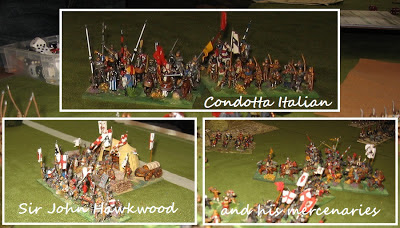 On this occasion we got no historical match ups so our knights fought gamely against Palestinian Insurgents - and some Greeks from the Middle East who predominantly fought with what, for us, would have been thought Swiss equipment.  Seleucid and Jewish Revolt, to be specific. 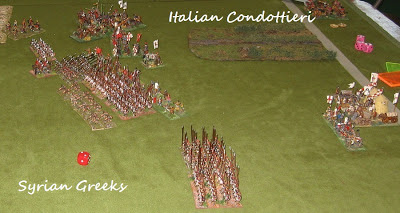 Although I don't really see the point of mismatched games like these, they were very amiable and tense, and at time I almost forgot it wasn't history!

Unfortunately neither game got to a conclusion.

Our first 8 Doubles games produced just 1 decisive outcome and sadly a whole day's wargaming did not add to that total.   Despite rattling through as many turns as we could in a losing second game, it still did not reach a natural result within the 3.5 hours.  The earlier game was a 10:10 draw with only 2 units broken on each side (of the 30 or so on the table).  V2 continues to disappoint in this respect and I am losing interest I think.

With the two full length games of FoG on Sunday, I was not able to get back into the main show and only had lunchtime with the Bosworth game.   Overall, I felt I missed out a bit (as the slideshow demonstrates).  Fortunately there are many good blogs with pictures of the main areas.  However, I'm not sure I would do Triples this way again.

After a weekend off, it is Partizan and we can devote ourselves fully to the show, the visitors and to the Bosworth project. 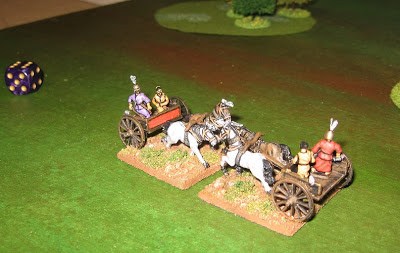 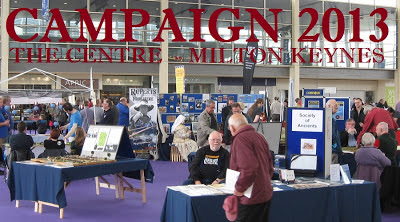 Yes - that was us just outside John Lewis's ...

Thanks to MKWS for the extra table.   It was down to me to come up with the plan as Trebian is away for his holidays ...

I decided to use the Society space for our 54mm Bosworth participation game, and the extra tables to help publicise the Naseby Project's open day next month ( see Naseby Open Day ) - this is a publicity and fund-raising event so if you can get involved it could help a great heritage project edge closer to achieving its goals).

We were perfectly position in both cases ... next to Rupert's Blewcoats who helped promote the Naseby day and explain the battle, and next to DBMM and HFG demos for the DBA (with Phil Barker and Sue Laflin joining in on the Saturday) ... So full marks to Neil and his band for theming it nicely. 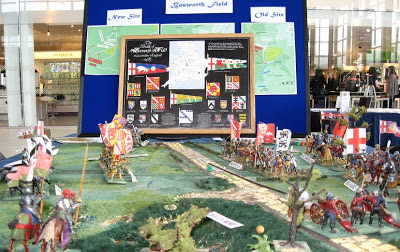 (the Battle of Bosworth presented as a DBA game in 54mm)

There are still a few enhancements that need completing with the game but I focused mostly on adding in some captions for this outing: members of the public love the big figures and without a wargamer's eye for detail, appreciate the extra information more than they notice that I haven't fitted all the new spears, yet.

Elsewhere around the show there was a really good range of display and participation games, covering a lot of the history and breadth of styles that today's wargaming offers - from Megiddo to Sci-Fi, and whimsical what-ifs like Peterborough's Napoleonic invasion by Montgolfier balloons game ... 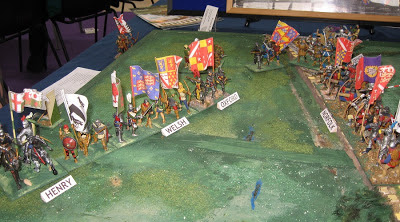 Many thanks to Graham Fordham for scaling his printed cloth 'Fluttering Flags' up from 15/28 to 54mm for the project. 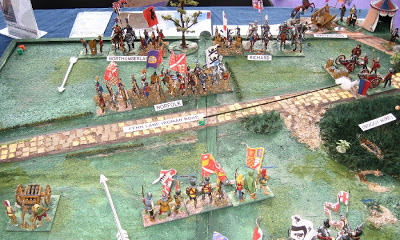 Although we played the game several times each day, at a public event like this most of our time is spent explaining the concepts and talking about the historical battles.

In the games, Richard had a consistently poor weekend habitually rolling well below the Earl of Richmond (later Henry VII, of course) whoever played him and whichever dice were rolled. 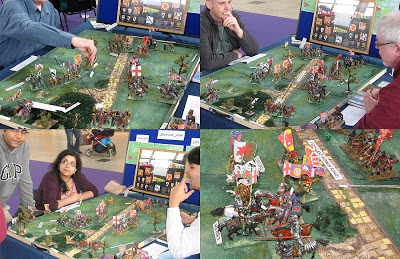 It is, of course, all in the deployment - a vindication of Mike Ingram's theories (though usually DBA is unpredictable enough to allow Richard to rewrite history on a regular basis). 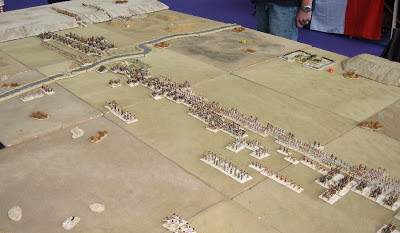 Hastings and St Leonards put on an epic Megiddo ... hundreds of figures (though I understand one less mare on heat than might have been the case) ... 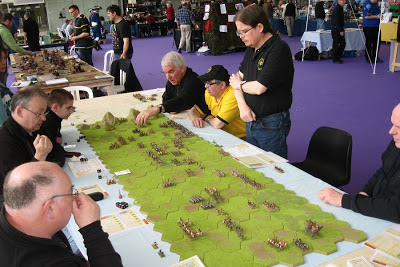 Bedford Gladiators put on a very impressive Command and Colours game on the now familiar hexagon terrain system from Kallistra ... 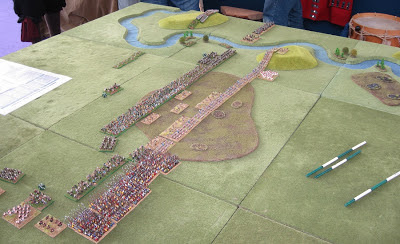 ... and right next to our 54mm DBA was this splendid DBMM 6mm demonstration.   You might say, the Alpha and Omega of the DB approach.   Of course, this was extremely useful when explaining ideas of scale to browsers (each 80mm of frontage representing around the same in each game - just a different approach to denoting what soldiers are fighting in the line) ...

Even bigger than the SoA 54mm knights were these jousting fellows (splendid 90mm toy shop figures similar to the one I used in Greyhounds in the Slips).   Ancient and Medieval wargaming was indeed very well represented at the show in all its engaging variety. 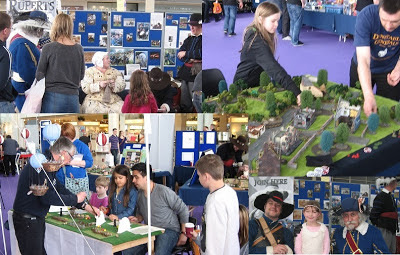 (wargaming at Campaign 2013: something for all the family)

This was as good a selection of our period as you get at many a bigger show - and nicely presented to encourage newcomers and browsers to get involved ... rather fewer of the 28mm sprawlgames, rather more variety of scale, size and concept. 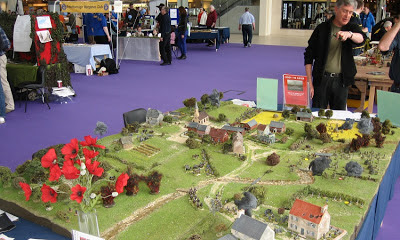 Outside our period, 20th century wargaming was well represented, air, land sea and under it.   There was some Krush the Kaiser and some Bolt Action, but I really like the Huntingdon club's 1:35 scale Stalingrad Crossfire game ... OK, it was big ... but not because it was sprawling, but because the toys were, well .. big.   Indeed, almost adhoc in scale ... 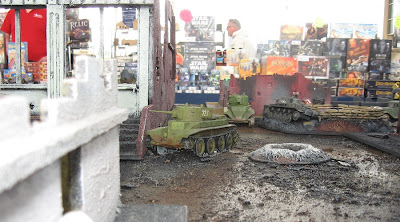 Hard work, and a long day (especially the Saturday), but well worth it.   Wargaming should do very out of this, and most of the sceptics seemed won over ...

Thanks to everyone who took an interest ...

DBA Northern Cup at Triples next.