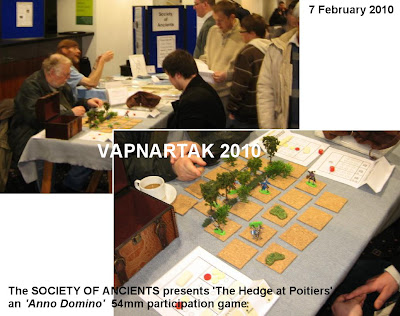 The first show of 2010 for us ... and great to be back on the road even if it is only 6 weeks or so since 2009 wrapped up at Wargamer .... It must be the horrible 'White Christmas' winter - the wargamer's nightmare.

Excellent trip up - thanks, Graham F, for driving (rare day off for Phil), plenty of traders attending (even if the Peter pig stand had been move 10 metres of so - so it took me a silly amount of time to track them down ..)..As well as the usual gear, for this show we did a trialed a multi-figure development of Graham Hockley's Anno Domino medieval combat game (as featured in the Society of Ancients booklet 'Let the Dominoes Decide' ... available from the Society website (website: games section) using 54mm individual figures. this was an attempt to try some add on rules for players to be assigned additional figures to their control - a bit like the extras in a movie (so you get to play your own character, but in the midst of a cluster of other figures which you control).

We kept it pretty simple for this run of course. 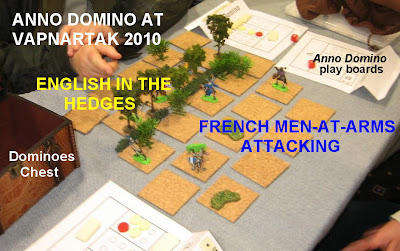 The game was 'The Hedge at Poitiers' - revisiting a theme from a recent Society of Ancients BattleDay (the Poitiers Battleday blog) ... and looking at another way to simulate the fierce man-to-man fighting Froissart describes. Ultimately, I plan a game base on the Harfleur scene in Henry V - but this was a modest attempt to test the multi figure idea. 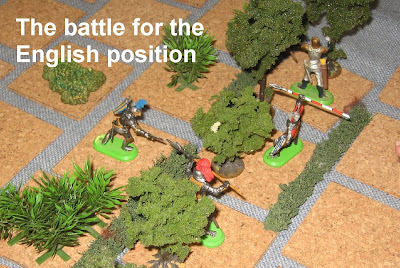 The figures are 'middle period' ('80s to '90s) Britains - just about the nastiest they ever did, but with the heavy 'deetail' bases that are useful for wargaming. Yes. OK - I do have some 1960 swoppets Knights ... but they stay in the cabinet I'm afraid. Painting up the basic figures proved the 'less is more' point with bigger figures, I think ... A gunmetal wash and some primary colouring in ... much quicker than, say, 15mm ... but a nice effect ... 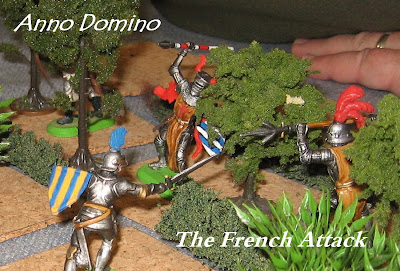 We played twenty or so games during the day - against visitors of all ages and experience level. Everyone seemed to find the game quick to pick up and exciting to play. A good introduction, I think.
Elsewhere, there was the usual diverse range that make Vapnartak a fun show to zip round. And there's always some newer stuff to look at. From Lake Tanganyika war in the air ... And quite a good variety of game mechanisms on display (not just the Society of Ancients and its dominoes!) 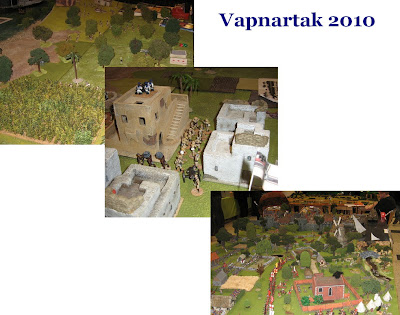 The detail on the terrain in this Antietam game contrasted with the broader brush treatment I pictured at Warfare last year (see the Warfare entry here ...) - unfortunately, Burnside's bridge would have been off table in this treatment ... one of the penalties sometimes paid when working in exacting detail ... 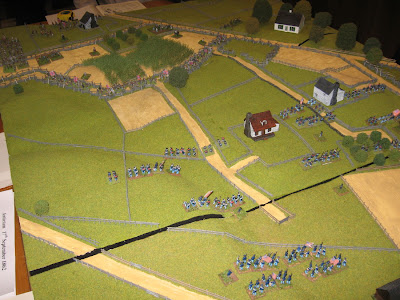 (the 15mm Antietam game: in the background, the cornfield has individually modelled corn stalks ..)

... and being Ancients on the Move, we like to get some more naval stuff into the blog - even if it isn't exactly ancient ... 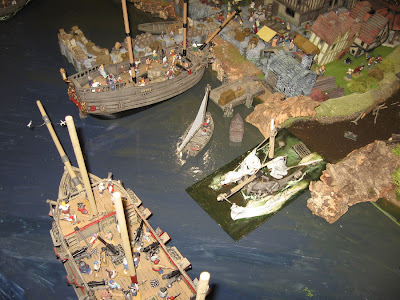 A very enjoyable start to the 2010 shows season - thanks, York, for the invite ... and thanks to everyone who stopped by ... 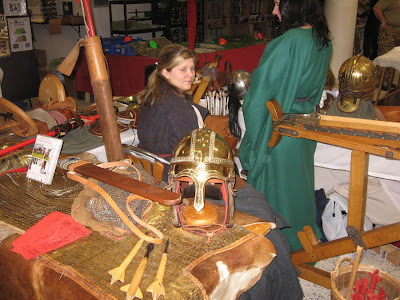