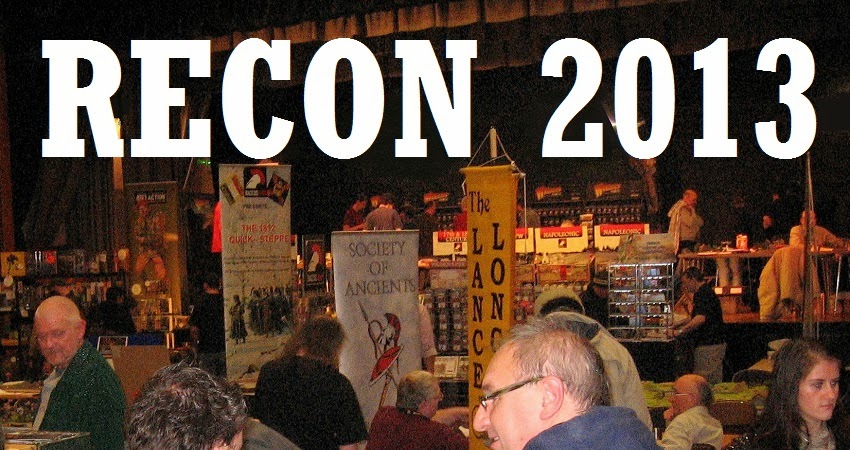 The reception by the wargame audience has been great, the shows have been well organised and the weather has been pretty favourable all through (so relatively free of dramas getting there and getting back) ... 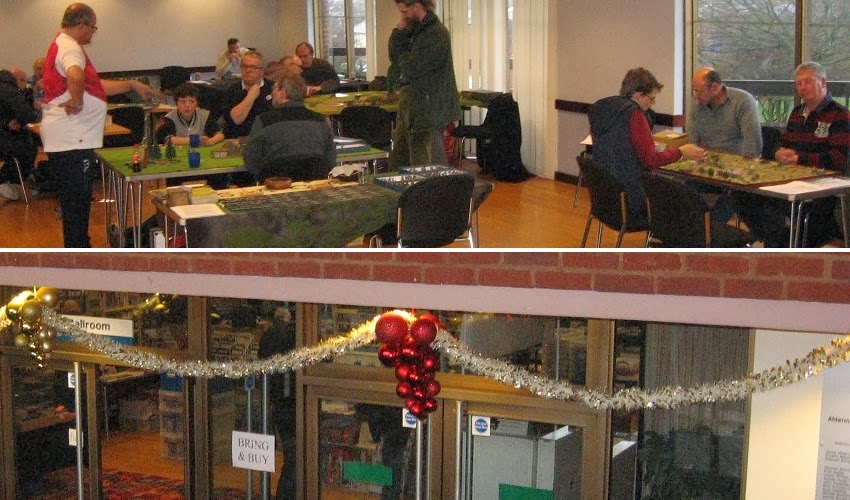 (Recon ... upstairs-downstairs: downstairs, behind the baubles and tinsel is the trade and societies; upstairs there are more games plus the Bring & Buy ... something for everyone)

I put on Bosworth for what is its last scheduled show outing - it may well reappear in a DBA context, and the Battlefields Trust have asked me to do it at the Bosworth Festival next year - but from a Society perspective it has now had its year in the limelight. 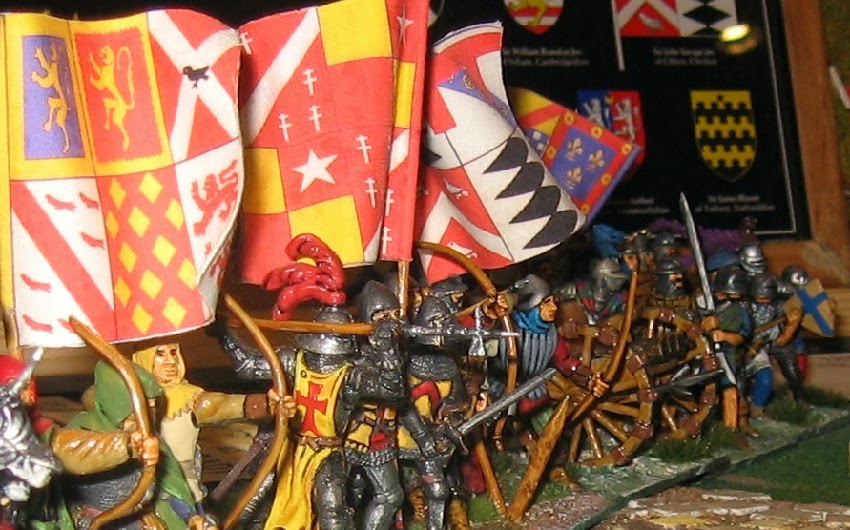 We were fortunate to be adjacent to our friends at the Lance & Longbow Society and made some good new contacts too. 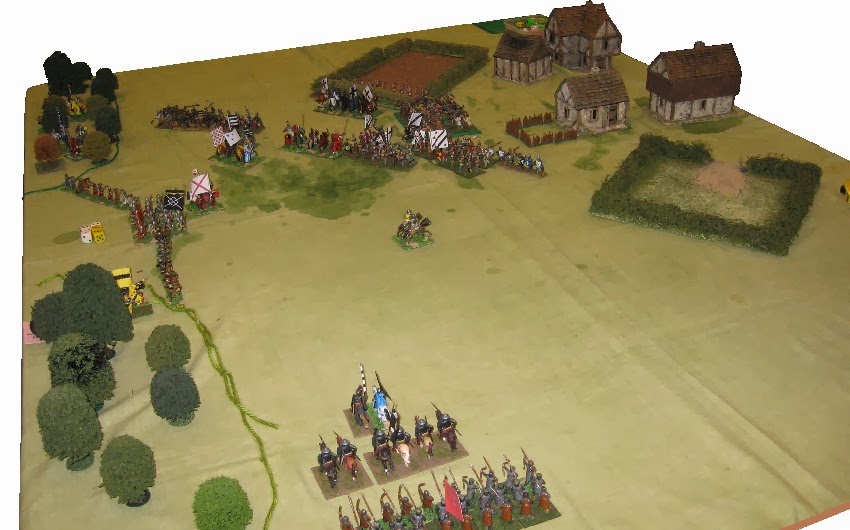 (Deepdale from the Lance & Longbow Society)

Steve, Will, David and Bob were back at Deepdale (1315) in a revised and very good looking version.   I recommend Will's and David's accounts of the action (and some excellent photo sets): a feast for the medievalist, as you would expect ...

Bosworth and Deepdale were the main interest within the SoA remit, but we also liked ... 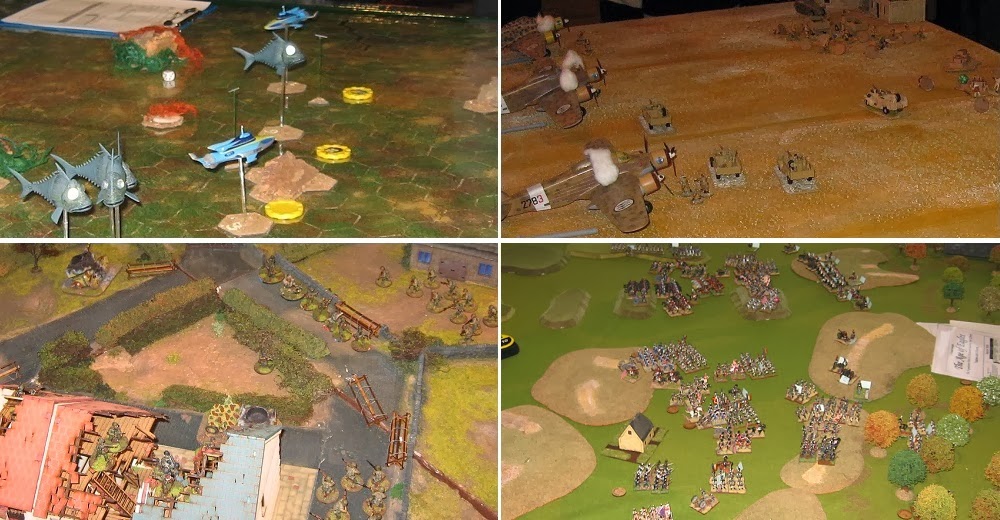 I liked the Stingray toys, but the game itself looked very wooden (note I didn't say 'fishy' - it's Christmas, after all) ... 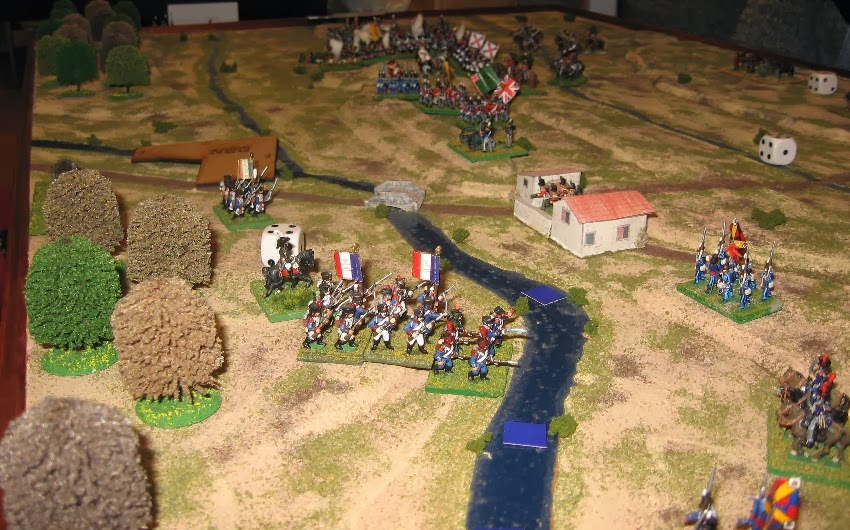 (DBN Battle of Albuhera ... nicely explained and supported by leaflets) 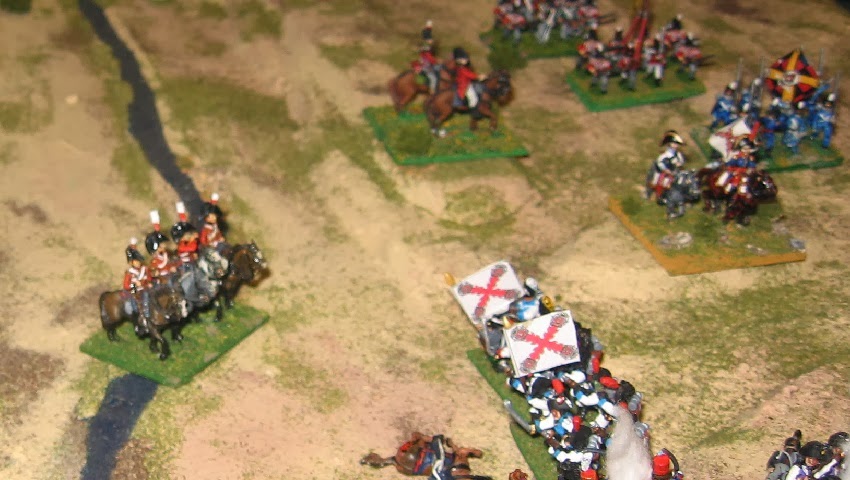 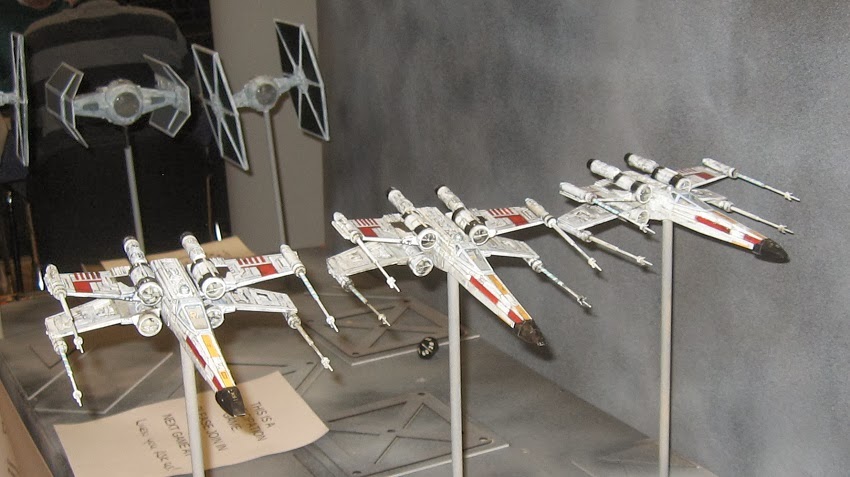 Yes - that was Star Wars and Stingray in the same blog ... but it gives you a flavour of the variety of participation games you can try at Recon ... 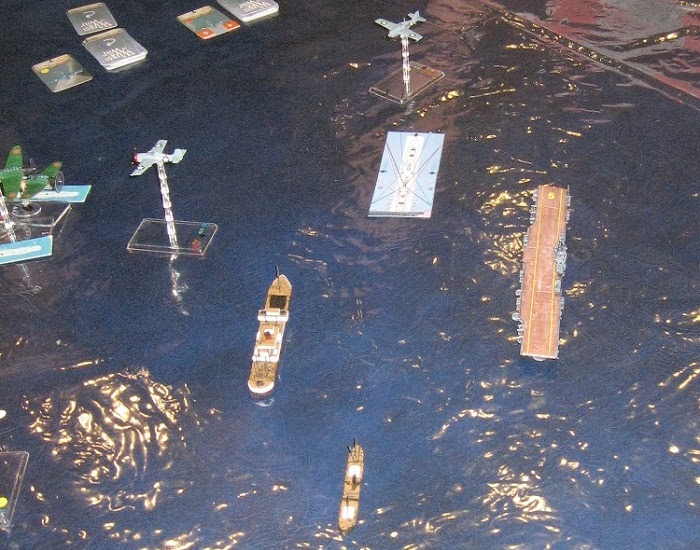 ... and finally, this WoG Pacific game: I'm no fan of Wings of Whatever, but the ocean did look splendidly wet and the little ships drew my attention.

So a good selection of nicely turned out games I thought - and some that had not been seen before (by me, at least)
*******

It was a little quieter for us in the afternoon, so having spoken negatively about Glen Foard's ambivalent interpretation of the deployments at Bosworth (he's great at the at the archaeology but neither clear nor convincing when it comes to reconstructing the lines of battle) ... I decided to try out a Foard interpretation ... 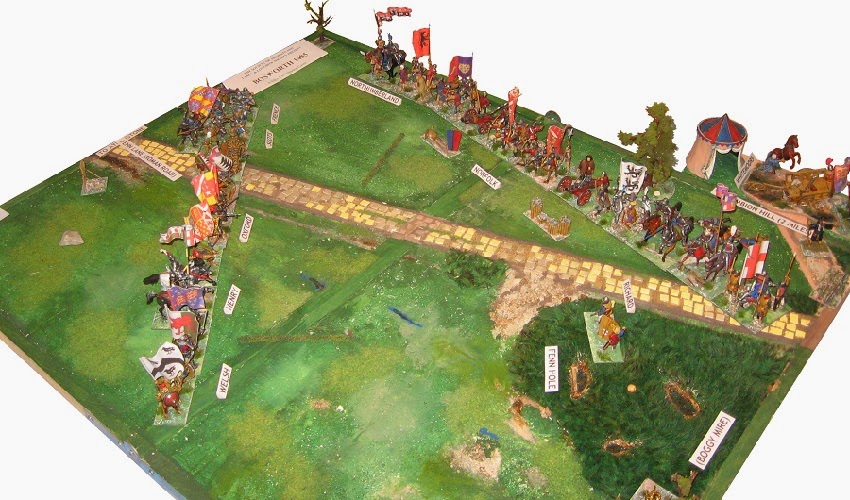 (Foard's Bosworth: the 'North of the Road' array)

Foard has two possible arrays on the correctly identified field ... both of which differ from Ingram's 'line astern'   ... one has the King's army in line, roughly perpendicular to the road, and straddling it.  The other has the army as in my photo, broadly North of the Roman road.

Both assume Henry approaches from the West and swings North of Fenn Hole to make his attack - avoiding the marsh and leaving it to his flank.

The guns are spread out in the line, not concentrated as Mike Ingram argues. 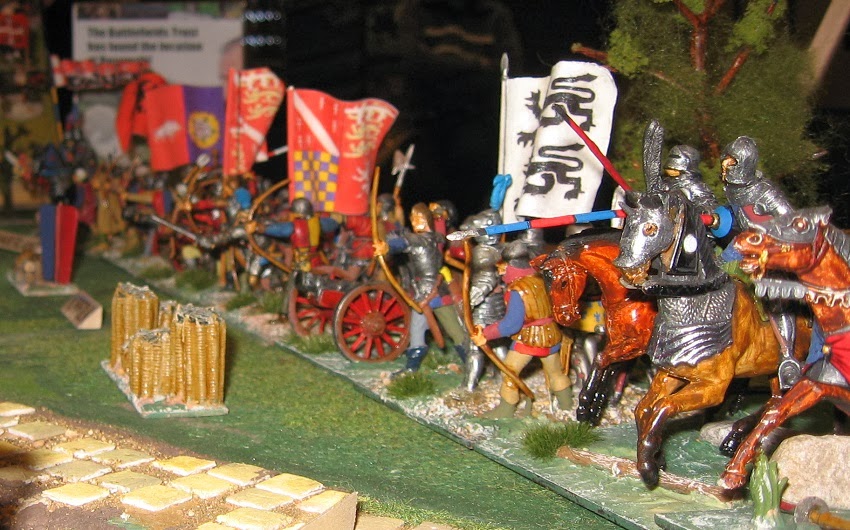 Line abreast does not embrace Norfolk's battle engaging first, which is how the sources appear to have it, and requires Northumberland to be where he will be unlikely to be engaged (he isn't simply 'at the back' as he is in Ingram's interpretation) - I got that bit wrong, and putting Northumberland in the natural position, got him unavoidably engaged in the early phases (which is historically inaccurate)* ... 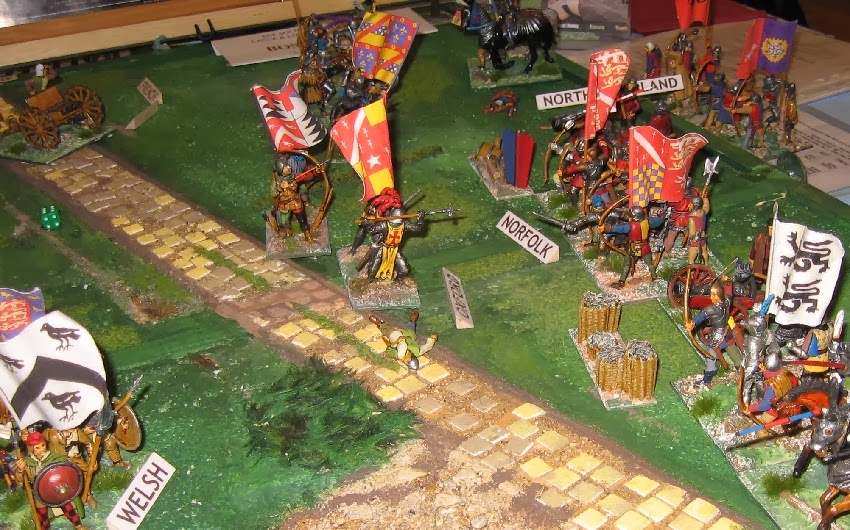 The marsh does skew the attack, however, leaving Henry and his kin dropped behind, and plausibly opposite Richard's cavalry (so that bit works well enough) ...

With both armies arrayed in line, the natural first contact was not Oxford vs Norfolk but the Mercenary French and Scots against Northumberland ... an unequal fight in which the continental pikes quickly did for Percy's mix of retinue and levies. 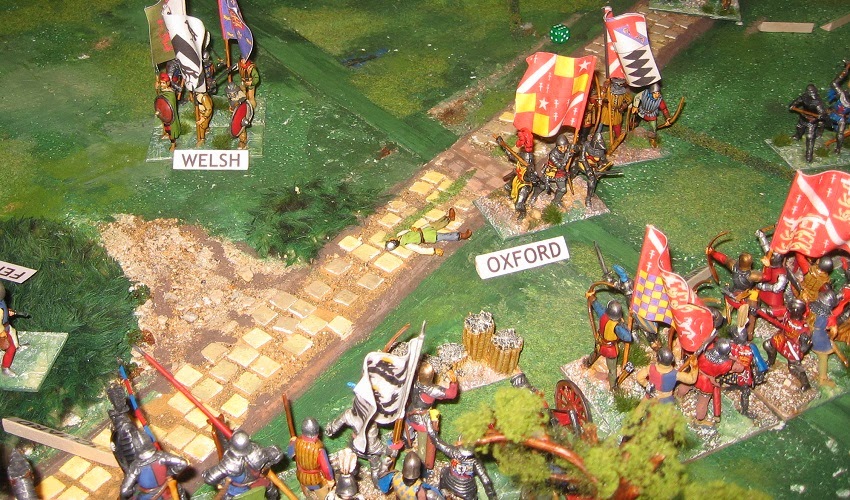 (Foard's Bosworth: Oxford attacks in the centre and suffers some losses)

In the centre Oxford lacks the firepower at Norfolk's disposal (this part follows the orthodox narrative) ... but the King's line is overwhelmed without need of either commander or the Stanleys ... 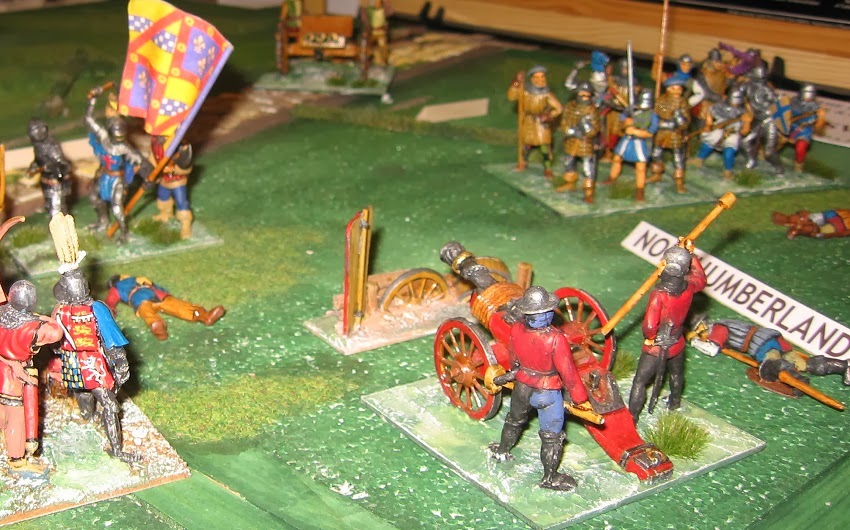 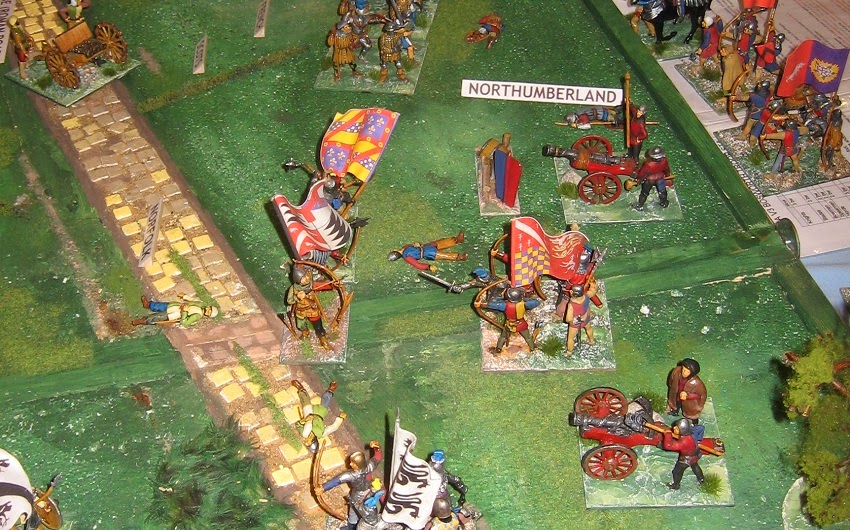 I was surprised that this array actually performed worse than the Ingram array - I also need to resolve some of the inherent problems before being convinced it is likely.

*assuming Norfolk's Vanguard takes the middle of the line, Richard therefore the left wing with the main battle (stationing him on the same wing as the marsh where his final melee occurs) and Northumberland the right.   Foard must have the Van on the right wing, Richard in the centre, and Northumberland on the left, hidden and behind the marsh (so not in a position to engage) ... But that would then not put Norfolk in front of Oxford's attack - so remains problematic. 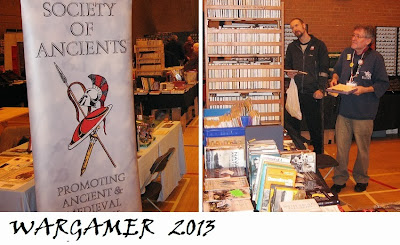 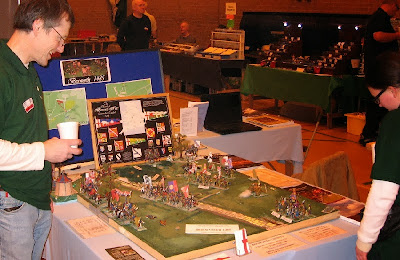 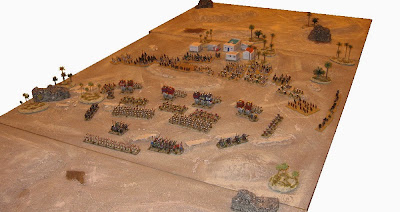 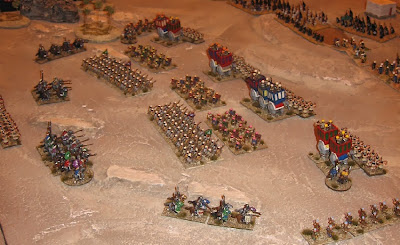 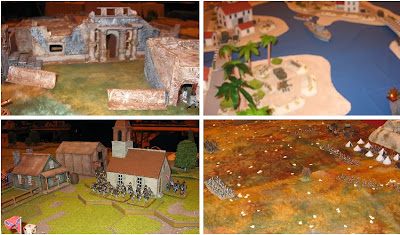 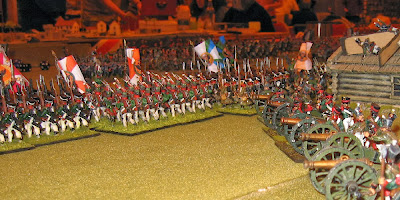 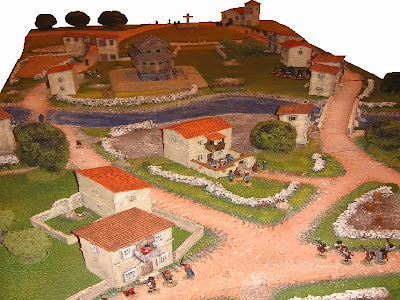 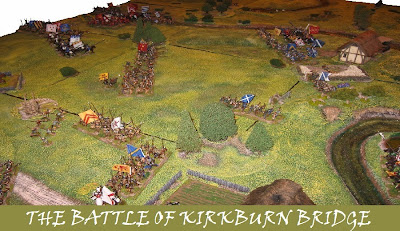 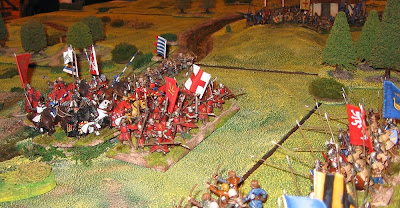 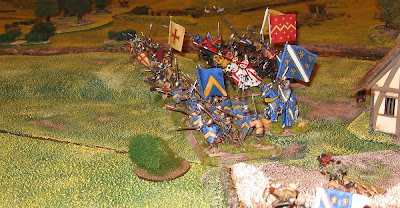 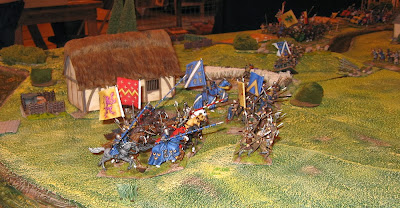 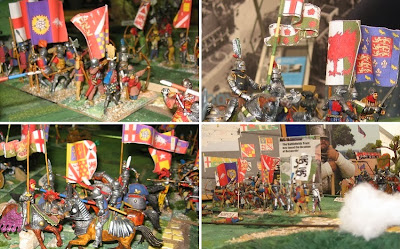 (more scenes from the Society of Ancients Bosworth game, created by Phil Steele, flags by Fluttering Flags)
Posted by SoA Shows North at 5:17 PM No comments: