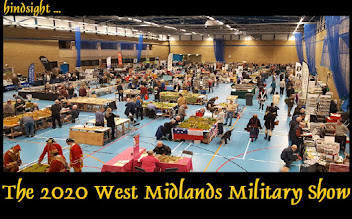 The West Midlands Military Show (March) is another one that got away.
When lockdown suddenly happened,  I was in the middle of sorting out my late parents estate whilst isolating myself over a false alarm.  The last shows we went to had slipped through the net.  Hammerhead/Northern Cup I already corrected. 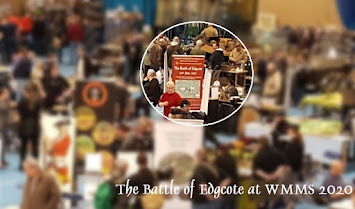 (WMMS 2020 ... here we are in the middle of the throng)
highlighted by the banner, WMMS (Alumwell) was the end of the development year for the Edgcote game which was first experimentally laid out at the show in 2019.
We went from the green cloth, basic units and needing guidance with Hail Caesar to a fully functioning refight.  So, from this: 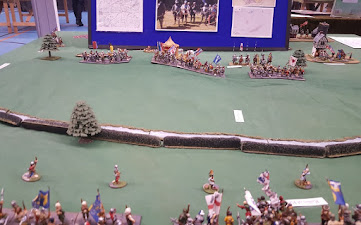 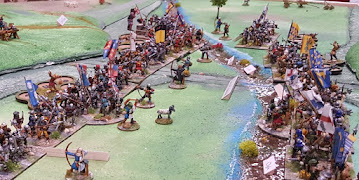 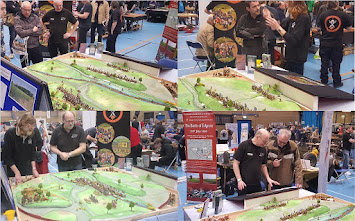 (Graham, Graham F and Phil with the Edgcote game - thanks to Graham for pic 3!)
Presenting the game on our nice round battlefield ... 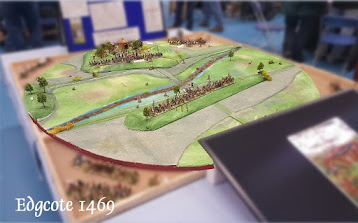 Why round?  Well, in addition to the fact that battlefields actually have no corners, the orientation at Edgcote is (by some, at least) thought uncertain, and reinforcements could potentially have entered from almost any point on the undulating landscape, so with a circular field, you can get all round and everyone p[lays in the middle.  It was an experiment, and I think it has paid dividends.
Here are some scenes ... 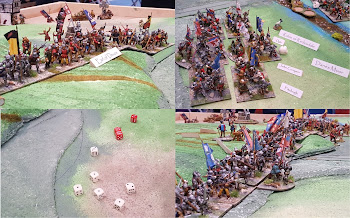 (bottom left ... why twice as many dice doesn't always benefit you in Hail Caesar)
WMMS is, of course, a tradition 'multi-hobby' military show, with a strong showing from reenactment and living history, as well as modellers and wargamers. 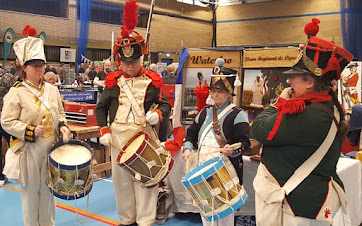 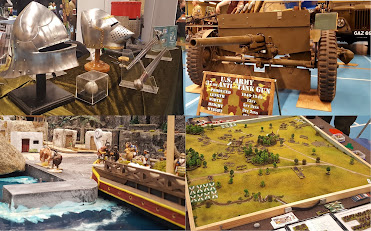 (bottom right ... another example that my pioneering pasting-table battlefield idea has caught on
The last physical 'show' I was able to get to was TORM ...
The Oringinal Re-enactors Market 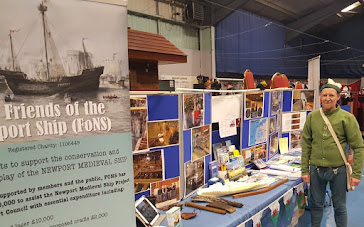 The Friends of the Newport Ship (one of  Warwick's WotR ships) were there with a stand, but mostly, of  course, it was a place to buy replica kit. 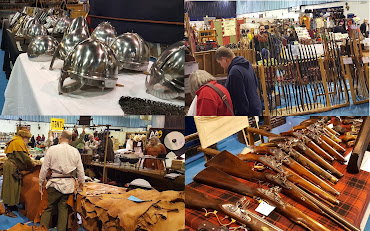 It is a veritable treasure house.  I was there to buy a Civil War period 'hanger' (basic sword) for us to use on the Northamptonshire Battlefields Society Stand as a handling example of the weapons used at Naseby.  I also bought a medieval arming cap.  Neither has seen any use or action because, although nobody would have predicted it at the time, we went into lockdown and related measures which wiped out the rest of the 2020 shows season.
Links:
Northamptonshire Battlefields Society
Friends of the Newport Ship
Join/Renew your Society Membership at SoA.org/join

Posted by SoA Shows North at 1:41 PM No comments: