PART ONE: FLATS, BATTLES and PROJECTS 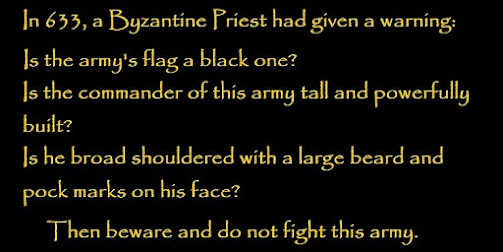 (slides from my SoAC talk) 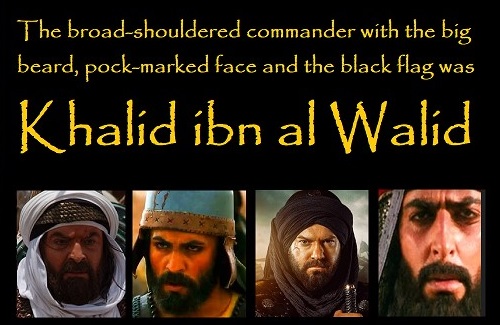 My fascination with Khalid started some years ago, with the arrival of some new recruits to my ancients collection. 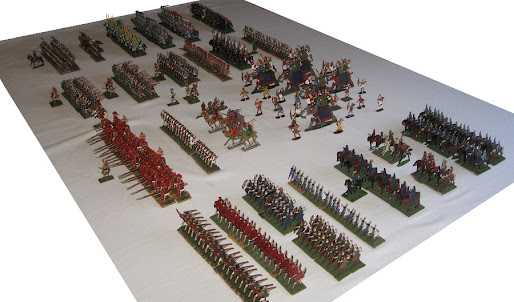 Phil Barker had joined in one of the Tony Bath sessions I had put on using the 'Derryck Guyler' flats*, and, appreciating my interest in the origins of the ancients wargame, offered to add his 1960s flats to the collection (they were, by then, just stacked away in shoe boxes, and he was aware that I would get them onto the wargames table).

In addition to a large number of Tony Bath originals**, the bulk of Phil's donation was, as we see in the picture, an Early Imperial Roman army. 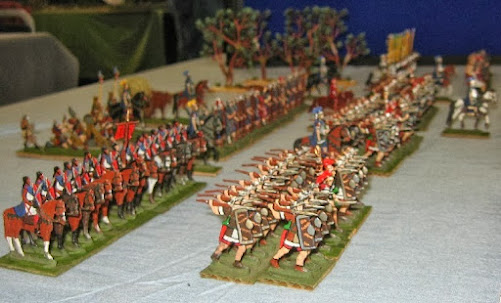 (the Romans, on show in Reading)

But in amongst them were a fair number of what I would consider (what today we would probably identify as) Byzantines, Sassanids and Arabs.

(refurbished - the Arabs and Byzantines)
I would configure the Romans and related figures into a Bath rules wargame - but it was obvious to me that I had a second project here: a Dark Age/Flowering of Islam collection ... maybe another DBA spin off (just as the Guyler flats spawned both the Plataea game and Lords of the Nile, this new addition would give me a classic Bath rules Roman game and a clash between the Byzantines and Arabs. 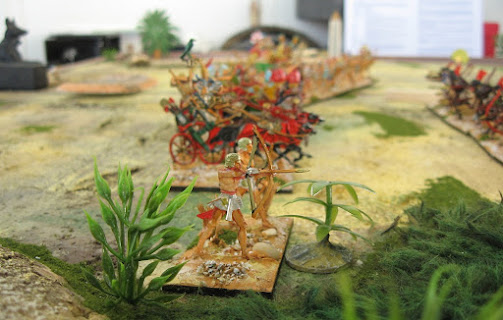 (Lords of the Nile: a DBA V3 sample game at Vapnartak)
The Lords of the Nile was a game we took to shows as a participation game while V3 was being playtested (I had declined to be a playtester but had told Phil that I would be happy to receive development versions and use them at shows so that people could see how things were going).
It went very well, so I was looking for a Byzantine-Arab battle that would make a suitable scenario which could replicate the LotN effect for the later period.  Ideally a battle a flat open battlefield from the Rise of Islam featuring Arabs, Byzantines, Sassanids etc. Well, something like Byzantines, Armenians, Persians and Arabs on both sides - that would be Yarmouk, perhaps. To understand Yarmuk, you need to know more about Khalid, and that is where my journey began. Yarmuk is conventionally described as a collossal battle fought over 4 or 5 days in which a vastly outnumbered Khalid manages to rescue his army from the brink of deteat - repeatedly - until finally being able to pull off a stunning victory (appearing behind the enemy's lines and swallowing the whole army up).  It is a lot to get your head around. 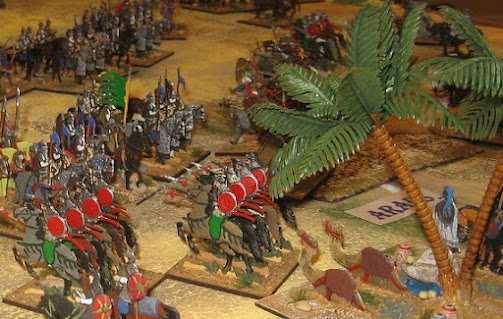 (cavalry action at Yarmuk from SoaC 16: the Arabs are driven back onto the line of their encampments)

An  analysis, though of Khalid's career and previous battles can make sense of this.  Mobility and use of concealing terrain were signatures of Khalid's generalship, and he would regularly find himself outnumbered.  Using what you might call an army-level version of traditional Arab raiding tactics, he would often attempt to pin the enemy into position without fully engaging ... in order to outmanoeuvre and envelop the enemy - compensating for numerical weaknesses with local advantages.  We see this in the Arab civil wars, and in the wars against Persia.  It should come as no surprise that this is what we see at Yarmuk.

Khalid was born in Mecca of the leading clan of the Quraysh.  He opposed the preaching of the prophet, and had lost many relatives in the struggle.  However, in around 629, Khalid and Amr ibn al-As convert to Islam and join the Prophet.  Khalid took control of the army in Jordan and was rewarded by the Prophet with the title Sayf Allah - the sword of God.

Khalid led the Arab armies for 9 years on all fronts and was undefeated in over 50 battles.  A career warrior, he died in his bed in Medina in 642.

The following slide shows how his life and times fit within the context of the Middle East:

In the second part, we will look at what we can learn from these battles. 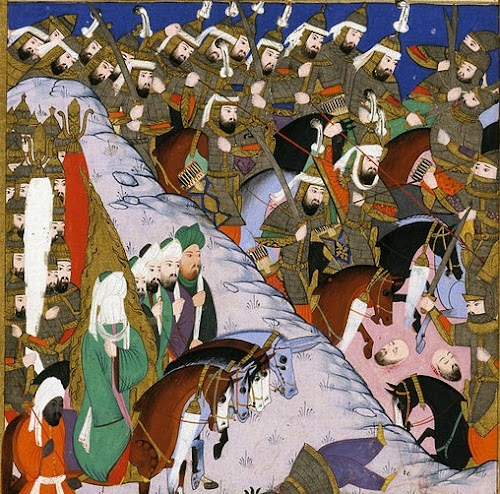 (the battle of Uhud from a later Ottoman manuscript volume)

* the first collection of flats, coutesy of Steve and the Salford friends (Gentlemen Pensioners), which had originally been bought from TV star (and former SoA President) Derryck Guyler.

** i.e. unlicenced copies Tony had made for himself in plaster moulds. 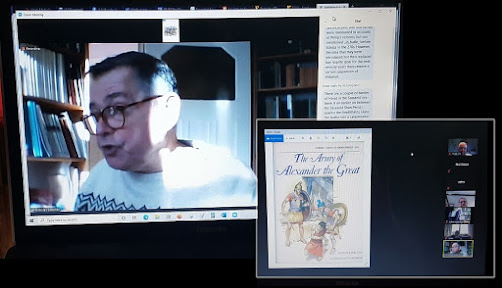 (Surely one of the most flipped Ospreys of our period: Nick Sekunda on the army of Alexander)

14 Months on, we have the prospect of lockdown being fully eased within a few months ... but for now, our 13 year journey following the Shows North team on the move is still stuck at home.

Last year's Virtual SoAC I was, of course, a response to this - the annual Conference I have supported from the start back on 1986 (and co organised in the 90s with Ian Russell Lowell) had to be cancelled, and that year's content (including my presentation on Khalid ibn al-Waleed) was delivered online.

You will be able to see the 'Sword of God' material in a forthcoming issue of Slingshot - but I should probably put a few slides up here to keep the information out there.

So, this year, we hope there will be 2 conferences ... in addition to our second online event over this last weekend, the 'face-to-face' conference, now at Madingley Hall, should be back in the Autumn.

And, assuming the feedback is positive, I imagine the plan is to go forward with 2 conferences a year: an online one in the Spring, and a residential one in the Autumn.

Prof Michael Fredholm: The Early History of the Goths, from Berig to the Battle of Adrianople 378AD.

The hot news from the conference is that Adrianople will be the BattleDay in 2022, so this all hangs together rather nicely.  Michael's talk on the Goths follows Simon MacDowall at SoAC 2019 and further enriches our understanding.

Gareth Sampson's talk took us East, to the last gasps of the Republic, and to Tigranes the Great, one of Rome's most resilient opponents.  It nicely set up Mark Fry's Sunday session on the successors to the Armenians and Parthians, the Sassanid Persians.

I was fascinated by this talk, as Mark attempted to understand, to reconstruct - and to some extent rehabilitate - the Sassanian heavy infantry ... regular, armoured archers ... heavy, mail-shirted swordsmen etc. 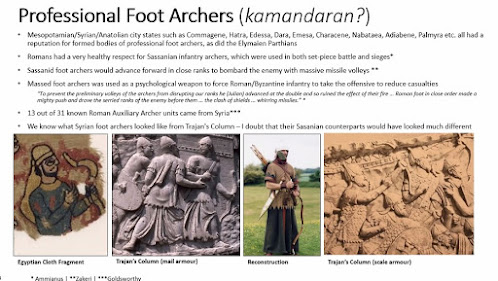 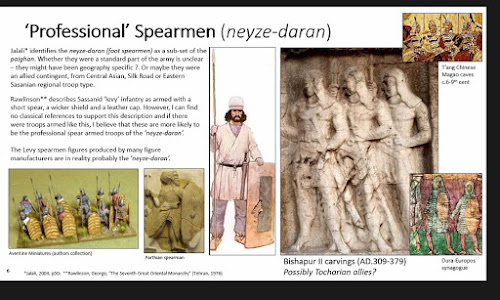 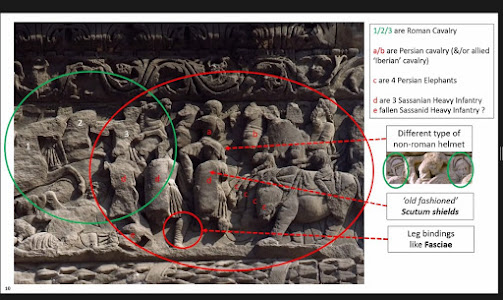 Some of the suggestions were quite convincing, and go some way to explain one of the points I had made in the Khalid talk last Autumn: the Arab sources are quite clear that Khalid's advantage against the Persians came from exploiting the mobility his cavalry gave him over a relatively ponderous and static enemy. 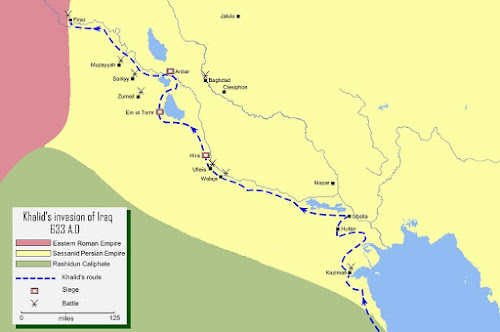 This doesn't hang well with the traditional wargamerly perception of the Sassanids as a cavalry army.  However it falls out, large numbers of solid infantry were certainly employed against the Arabs - and Khalid's cavalry were able to defeat their wings and envelope the centre.

So Mark's ideas certainly have some credibility with regard to the Arab wars. 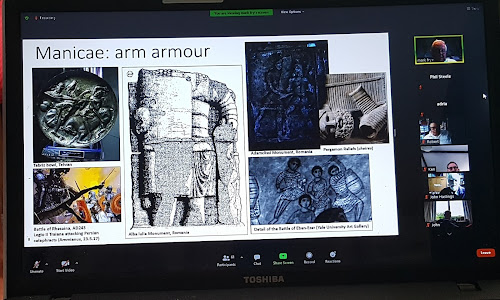 I was particularly fascinated by Nick Sekunda's thoughts on methodology.
Nick reflected on his training in history and archaeology and how he was taught to give equal value to the archaeological evidence as to the textual record - bemoaning how frequently the textual is given precedence, even if the result is nonsense.  As many of you know, with me, that's preaching to the converted (in my academic days, I switched from History to The History of Art for a similar reason ... to be able to give proper value to the material evidence - and so as to gain a stronger understanding of that specialised source material) ...
And I think Sekunda's work, along with Duncan Head's, was part of a shift which took our impressions of the ancient world (then mostly understood through the texts of ancient writers) closer to the visual and archaeological record.  I think that still informs how we see the military cultures of the past today. 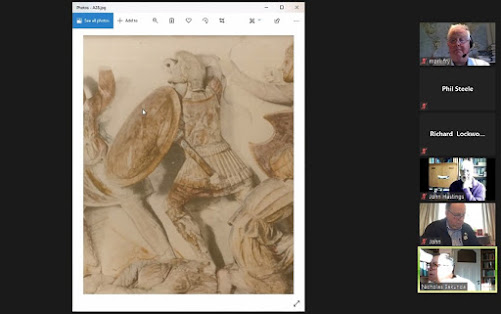 What was particularly interesting (arguably controversial) was Nick's assertion that evidence from monuments - in this case, particularly, say, the Alexander sarcophagus - was archaeological evidence ... pretty much the same way an excavated helmet was archaeological evidence.
I'm not sure this is the case (well I'm sure it isn't) - recovered sculptures, paintings, monuments etc. are very interesting, particularly where they are contemporary, or near contemporary, to the events/people they depict.  But they are still artist's impressions, they aren't the real thing.  In some ways they may be better (a Macedonian helmet on a sculpted figure is quite likely to be what the sculptor though most of the soldiers would wear - but an actual helmet that's been dug up might be any old random variant or 'one off' that just happens to have survived) ..
So artistic evidence isn't the same as archaeological evidence, however close to the events depicted (unless there are other reasons to explain that) ...
Anyway, fascinating and a privelege to be taken through the steps used to reconstruct helmets, pikes, shield blazons and the like.  A classic work. 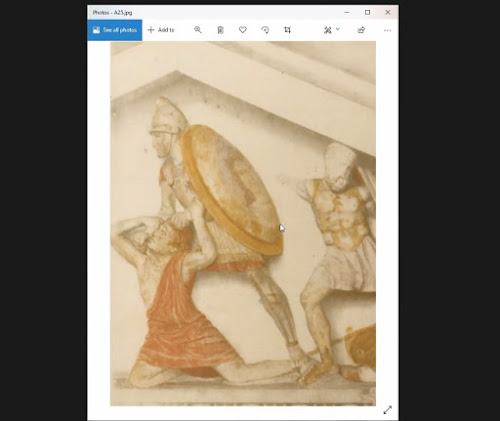 (slides from Nick's online talk)
The conference was 4 talks of an hour's duration including Q & A run over the 2 days, 4pm to 6pm.
It worked very smoothly and was easy going for the participants (say compared with the medieval warfare one I just ran for the Battlefields Trust, which was 5 sessions run on the same day - more rewarding, perhaps, in a number of ways, but you did have to commit to being with us all day*)
I'm looking forward to Shaw House for the BattleDay and to the next 'live' conference at Madingley Hall.
Great stuff.
*the again, we did get it done on the one day - so it's swings and roundabouts to some extent ... discuss *wink*
Posted by SoA Shows North at 2:06 PM No comments: