The Society of Ancients and The Lance & Longbow combined as usual at Kelham Hall for The Other Partizan, Newark's early Autumn show.

The display was Phil Steele's Northampton 1460 which was constructed for the Northampton Battlefields Society, formed last year because of the threats to the historic battlefield (which is currently open park land and golf course) - NBS has both a website and a Facebook group. 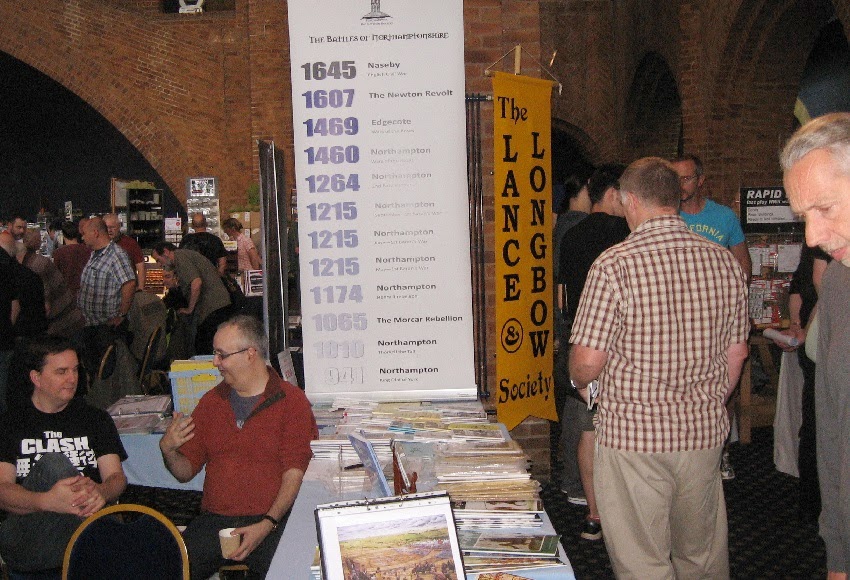 (behind the displays, the NBS banner lists the battle of Northamptonshire)

The society's principal concern is the 1460 battlefield at Delapre Abbey, but on foundation it was asked to widen its brief to encompass the other battles of Northampton and other important battles within the county such as Edgecote (1469).

I should add, perhaps, that the great ECW battle at Naseby continues to have its own support network (the Naseby Battlefield Project) but there is considerable interaction between the project and the town and county society. 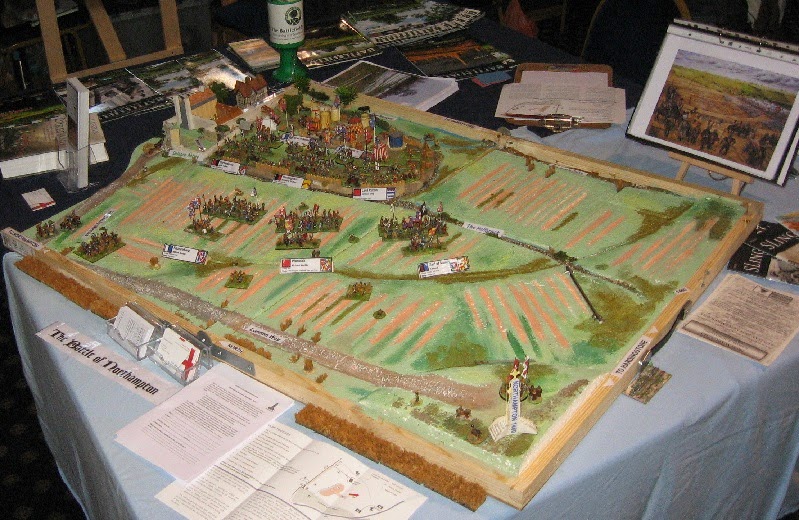 The evidence relating to the battle at Delapre has been collated and evaluated in a recent CMP (Conservation Management Plan) by battlefield archaeologist Glen Foard (the man who found Bosworth) and this has been accepted by the council (though many implementation hurdles remain to be negotiated). 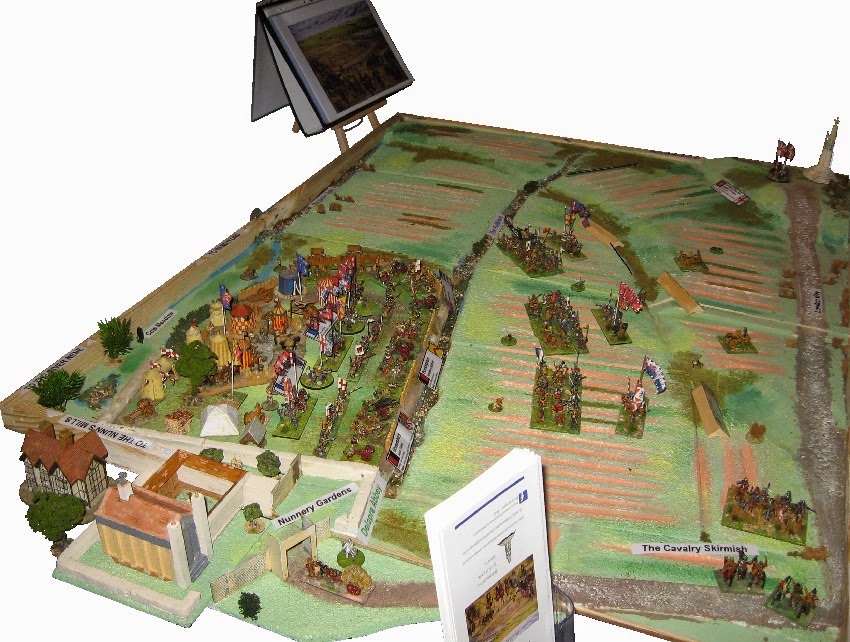 (the Battle of Northampton at Delapre viewed from the North - from the direction, say, of the castle)

The report makes clear that the balance of evidence is that the battle took place in the park (then Hardingstone's open fields) adjacent to the nunnery, overlooked by the Eleanor Cross.

When de Waurin refers to the emplacements 'behind a little river' he almost certainly refers to the Fullbrook, a stream that crosses the park, not to the massive river Nene that cuts the fields here off from the town itself.

Reconstructions that butt the king's position up against the meandering river are almost certainly wrong according to current scholarship (I should add, perhaps that the majority of contemporary - or 'near contemporary' - accounts place the battle in fields - so in the park - not meadows - which is what flanks the river). 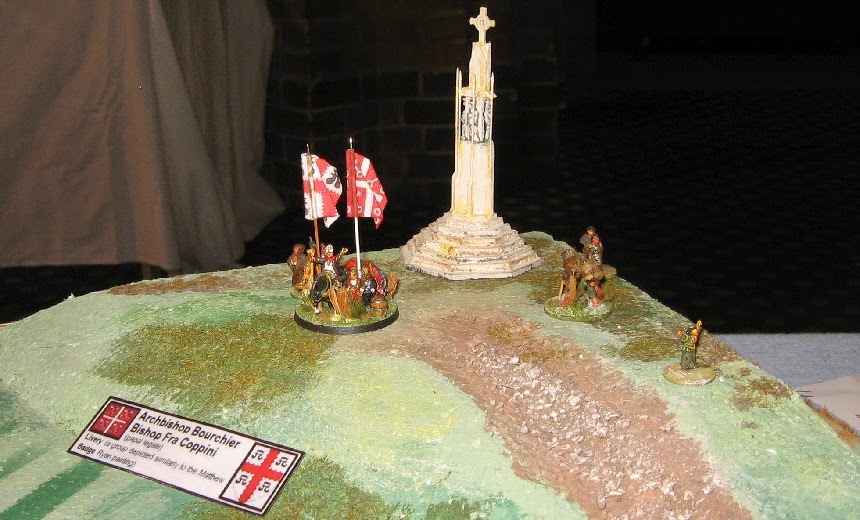 Yorkist partisans archbishop Bourchier and the Papal Legate Francesco Coppini watched the battle from the Eleanor Cross, so the Hardingstone cross, which remains in situ, is one of our reference points for locating and orientating the battlefield. 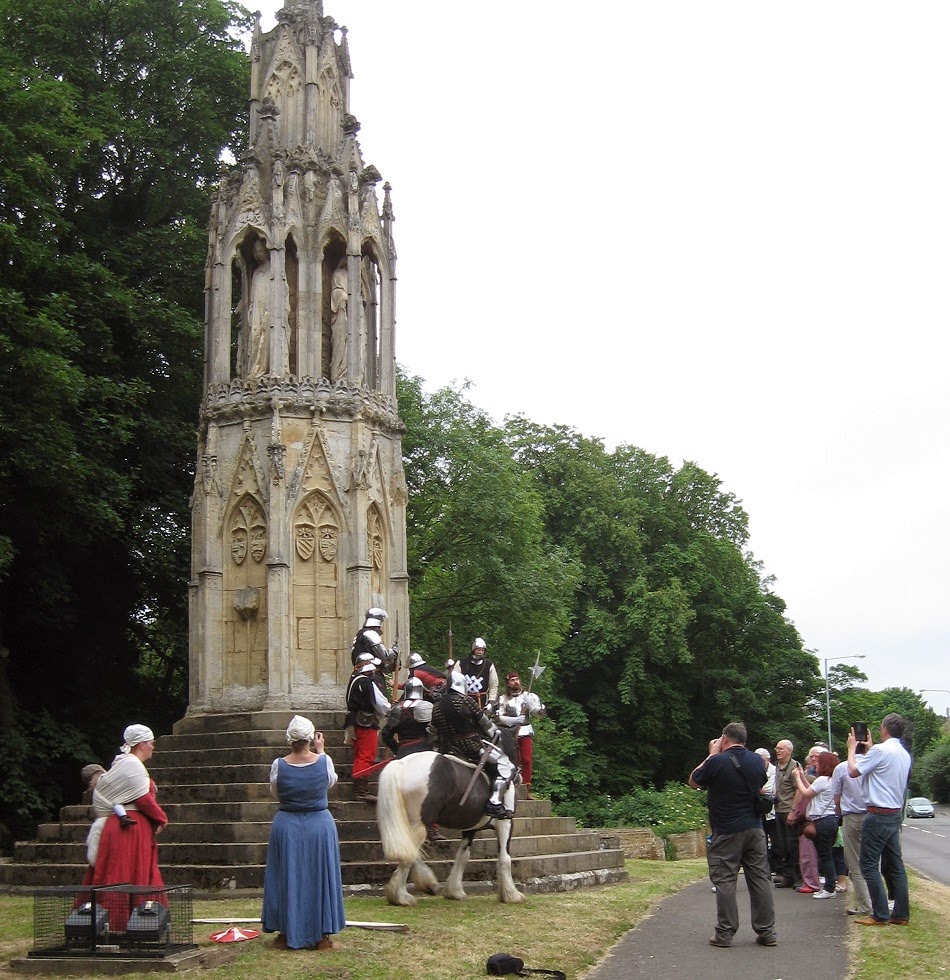 (the Hardingstone cross today - shown on the anniversary of the battle)

Frustrated with Buckingham's refusal to grant Warwick and audience with the king, the Papal party on the hill excommunicated the Lancastrian army.
We have no direct reference to what effect this may have had ... although the Lancastrians did, of course, go on to lose, and there were no permanent memorials erected to their fallen. 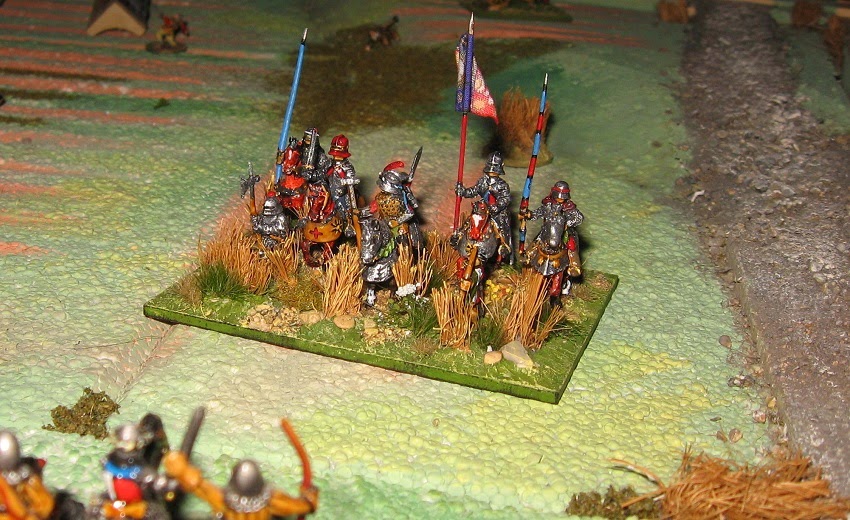 This project is part of an ongoing campaign to understand the battle better and to publicise its historic story and its present challenges.

We will be taking a playable version of the battle to Derby early next month and we will have battlefield guides and info forms on the stand.

The other crowd pleaser at The Other Partizan was Simon Miller's collosal Pydna game ... 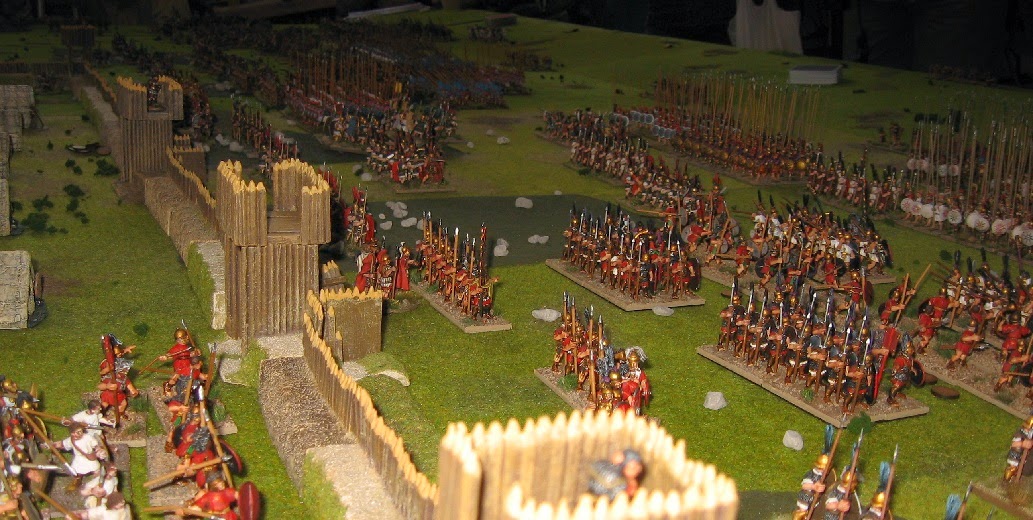 This was a huge project but involved a large number of participants and was played throughout the day.

The rules were Simon's forthcoming To The Strongest (see more on Simon's blog) and feature grid zones and playing card activation. 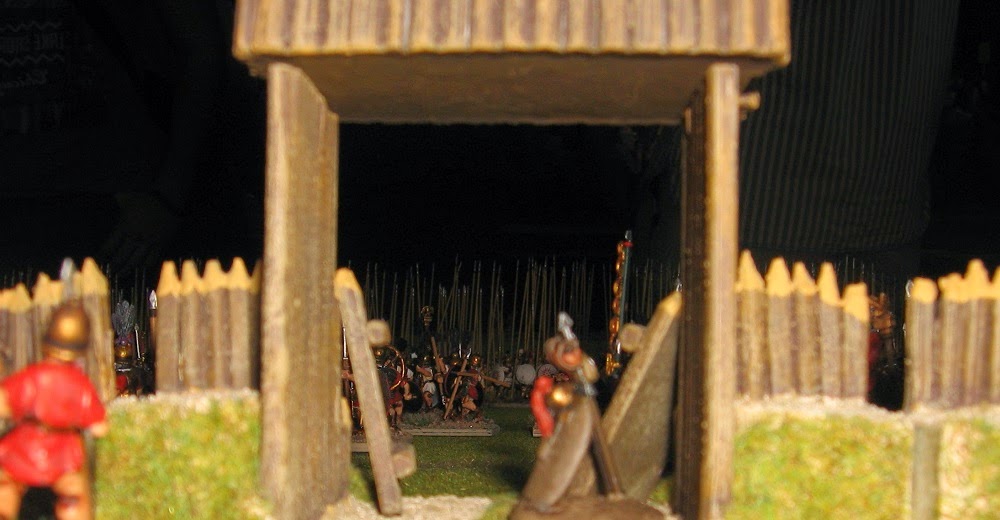 (Pydna: a view of the battlefield through the gates of the Roman camp) 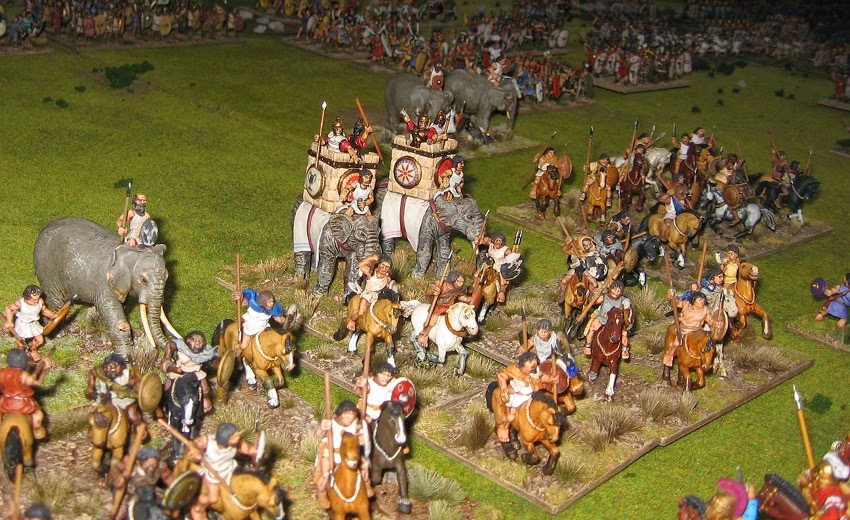 (Numidians and elephants thunder forward on the Roman wing)

A Society of Ancients member, Simon has done an excellent job of drawing enthusiasts and show organisers into these projects ... Time was when I might have reported from Partizan that ancient warfare was poorly represented.

Now it is the star of the show.

I spotted a good looking Dark Age game and a snowy GNW-ish battle in Skane ... 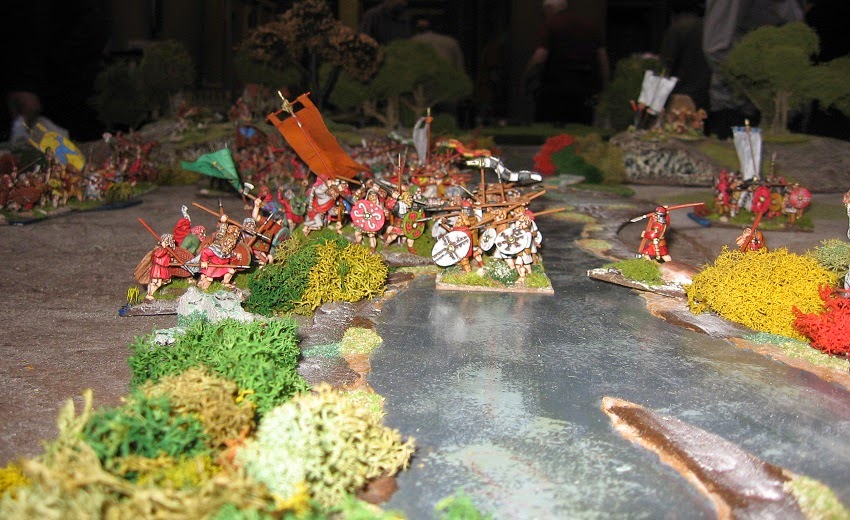 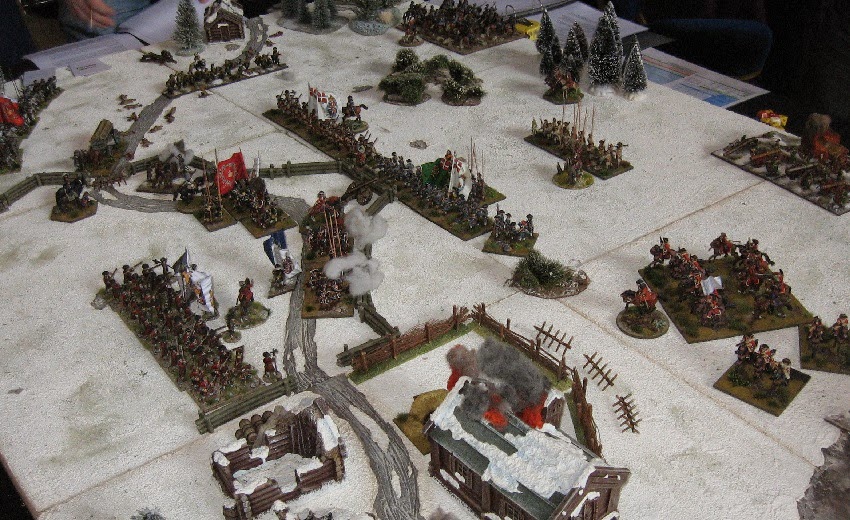 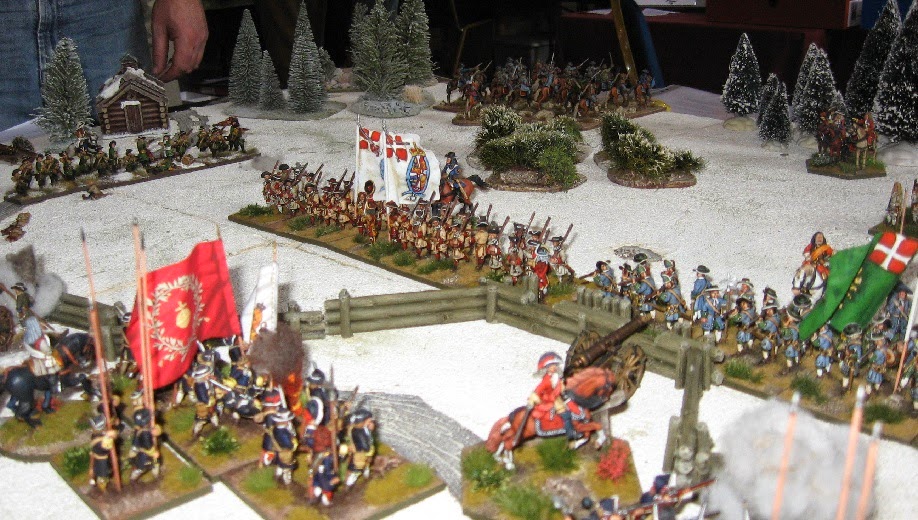 Having laboured hard in the past to get snowscape-compatible basing in the past I was quite impressed how comfortable the visuals were with unmodified 'rock and grass' basing on the white boards. 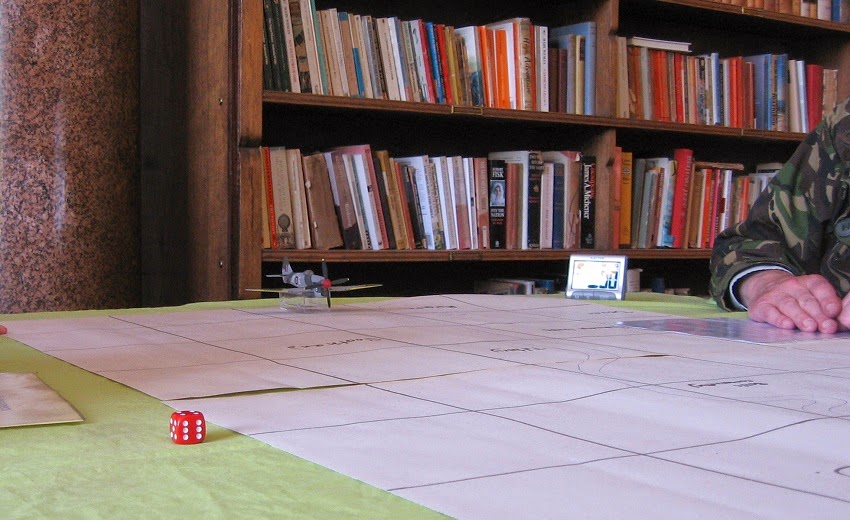 Also at Partizan, Wargame Developments had their Doodlebuggers game (well most of it) all geared up to to blow V1s out of the sky (usually onto Southend pier or flattening the now famous shed in Bob Cordery's garden).

Great show as ever ... nice to be back in the main building even if that makes photography more of a challenge.   Thanks to the hosts for inviting us of course, and thanks to everyone who stopped by, chatted, took photos of the battle etc.

Please get in touch if you want more details about Northampton or the various Societies or follow the links.

If you are an active enthusiast in the ancient and medieval periods, the Society of Ancients is your society - please consider joining if you are not a member already.  If you are of the more dedicated disposition, please contact the Society Secretary (say, via the website) and volunteer to help.  There are always vacancies.

Or find me at Derby and we'll have a chat.   I can answer many of your questions and put you in touch with the right people.
Posted by SoA Shows North at 2:00 PM No comments: