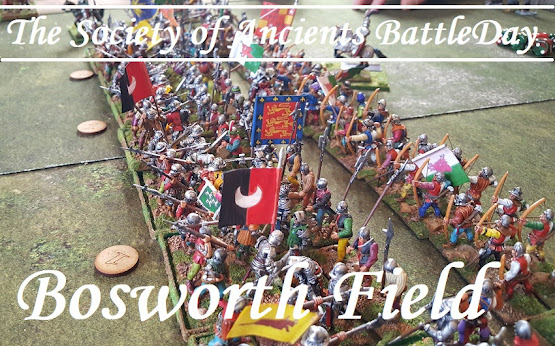 So, by coincidence, the BattleDay eventually took place barely a week ahead of the anniversary.  The usual venue wasn't an option, so the organisers opted for the splendid Shaw House in Newbury, veteran of the 1644 Civil War battle, and well worth a visit in its own right. 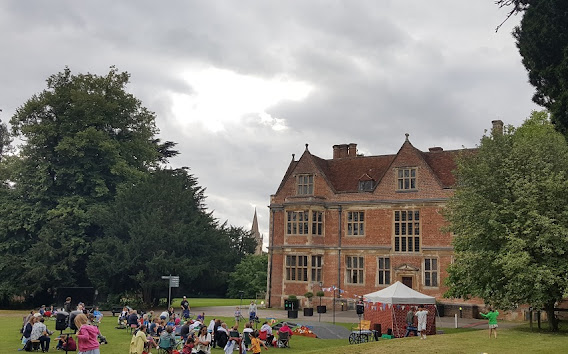 Overall, the event attracted 45 participants.  There were 11 tables featuring 10 rulesets (as the Peter Pig roadshow came with two Bloody Barons set ups).  I think this was a first time for Martin and friends so that was a bonus.

We then got onto the games which included my trusty 54mm DBA which we played 3 times altogether (2 wins to the earl of Richmond, 1 to Richard) ... I also played in Nick's HoTT variant (the Magic of Bosworth) which I think was also a Tudor win) 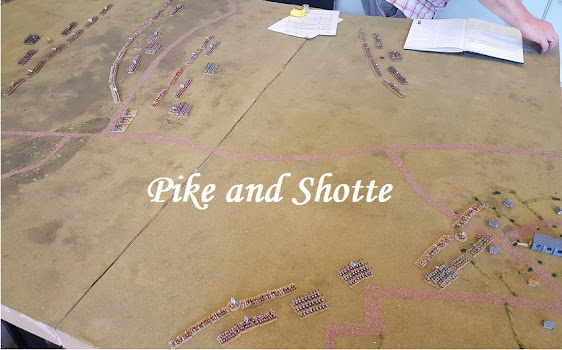 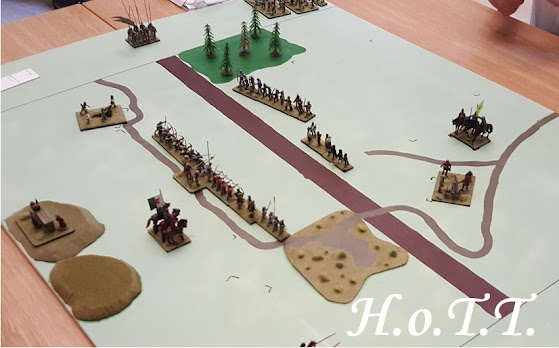 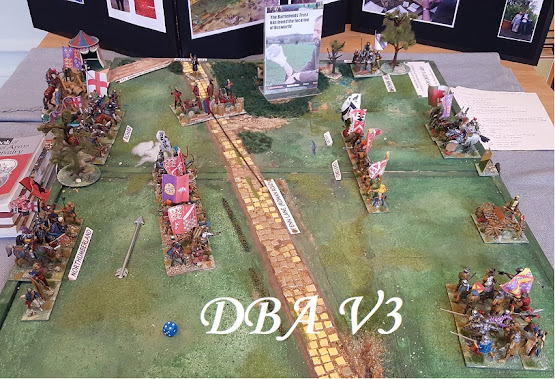 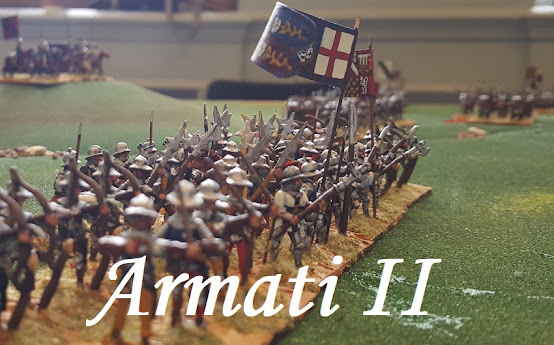 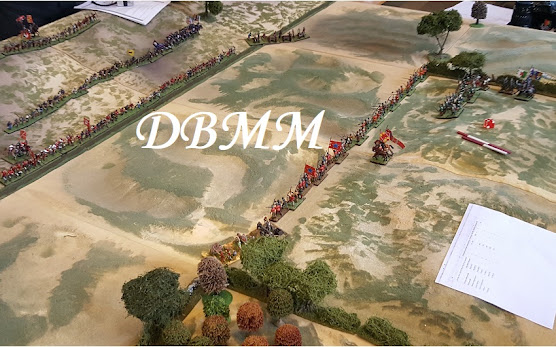 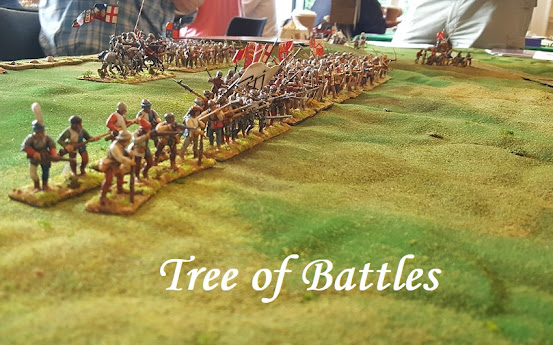 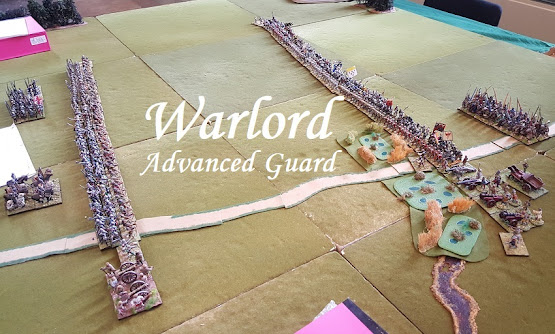 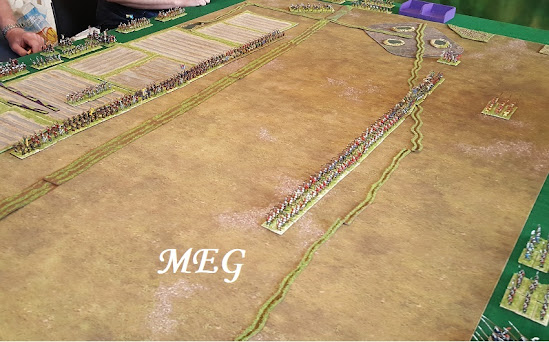 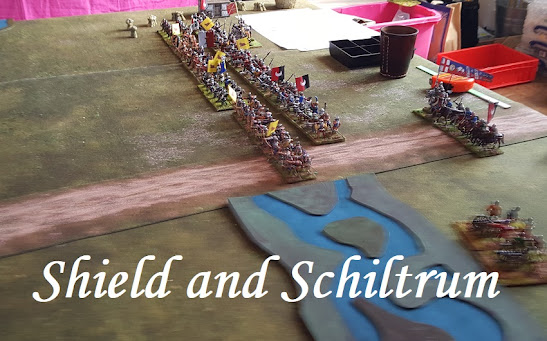 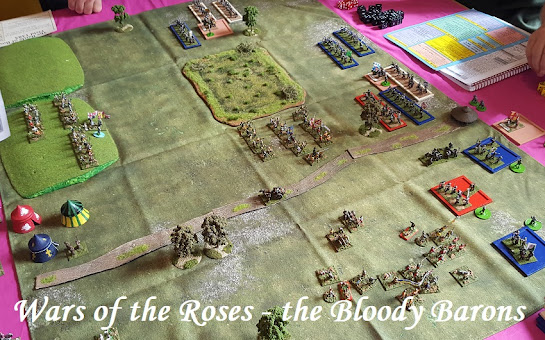 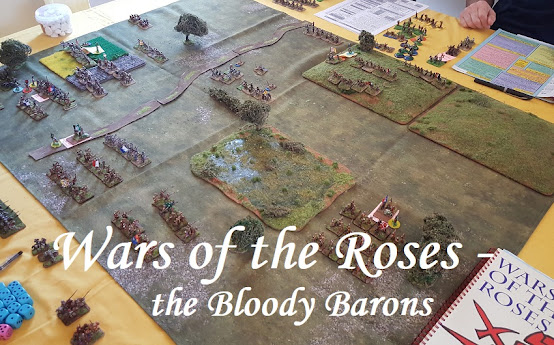 I was able to sit in on the Armati game which seemed to flow very well and featured a mass of veteran 20mm figures from Roy's collection. 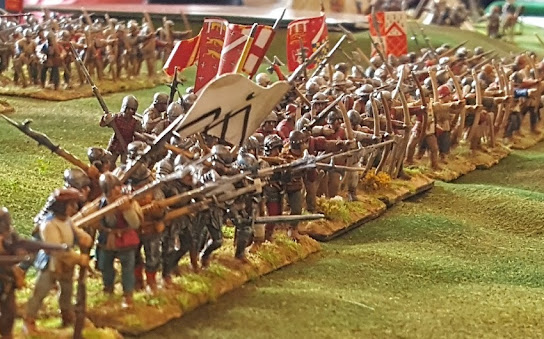 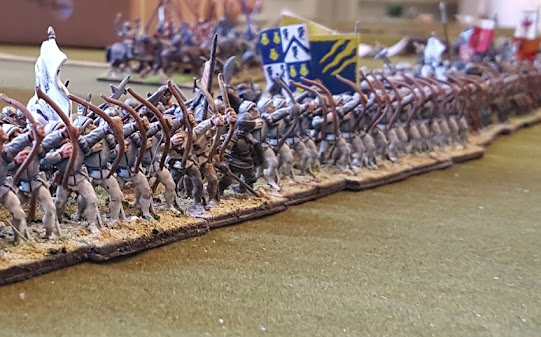 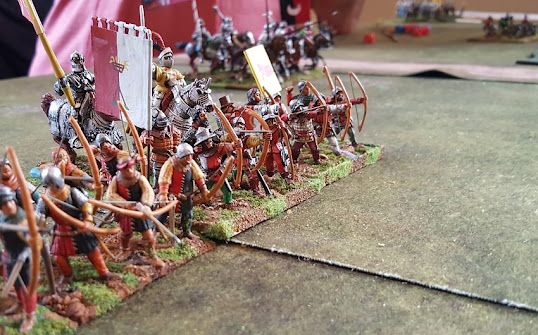 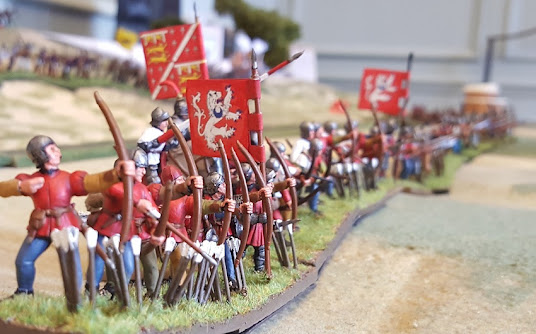 As you can see it looked splendid, and everyone seemed to have a great day.  Other than the games I commented on above, I await a future Slingshot to see how well they all went.
Next BattleDay will be Adrianople.  Get out your Goths!
Posted by SoA Shows North at 11:56 PM No comments:

Farewell to one of our Brothers in Arms 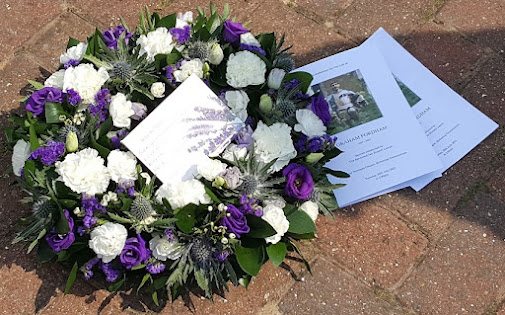 It has been a tough few years on the funeral front, and last month we lost one of the Society's longest standing and remarkable activist enthusiasts, Graham Fordham ... two term Committee man and former Treasurer ... stalwart of the Shows Team for over 20 years ... and, along with Chris A and Paul S-to-Z, one of my 3 regular doubles partners in that Golden Age of tournaments and events through the Nineties and Noughties. 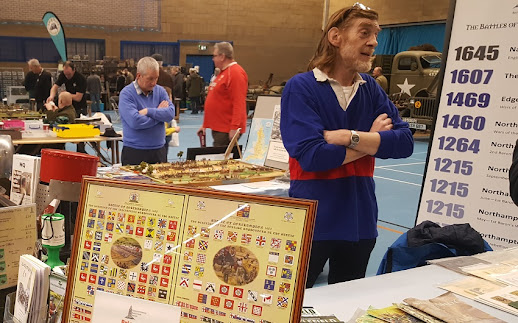 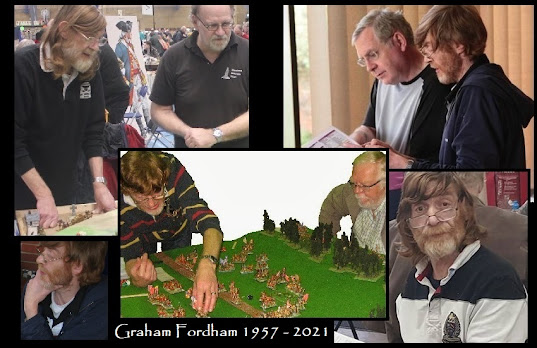 (Graham at the wargame table variously with me, Mark G and Will W)
Although we grew up barely 6 miles apart, I didn’t meet Graham til the Society of Ancients AGM in 1986. Through Andy Gittins and The Slough Barbarians, we rapidly became (you might say) ‘Brothers in Arms’ …

The Barbarians were the SoA Shows Team, the Society drew us in as volunteers, and the Slough venue became my local club, my weekly wargame.

I didn’t have a car back in those days, and I would usually blag a lift over to Graham’s parents’ house in Leavesden, then he would drive us over to Hedgerley and later back to mine.  In his trusty Renault 11. 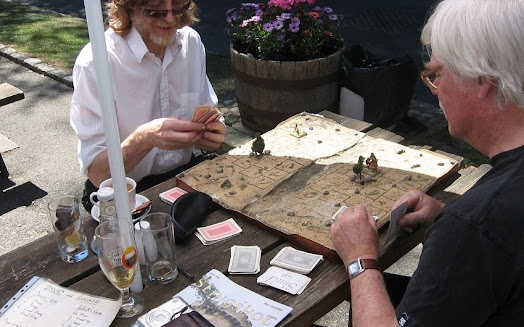 It was a time of change, and in 1988, after a couple of years, Graham came off the SoA Committee – and, ironically, I went on.  A Committee I would notch up just under 20 years on … a Committee Graham came back onto in 1996 as Treasurer.

As well as my car share for club nights, Graham and I would do a dozen or so shows and events a year for the best part of 3 decades, easily covering 12 countries on 3 continents.  We played in South Africa, Rome, New Orleans and with that logic that defies analysis, played each other in the third round of the World Championships in Melbourne ... literally 10,000 miles from home (where we lived 2 miles apart and had travelled out together ... ) well, it made sense to sombody and I remember the game very well. 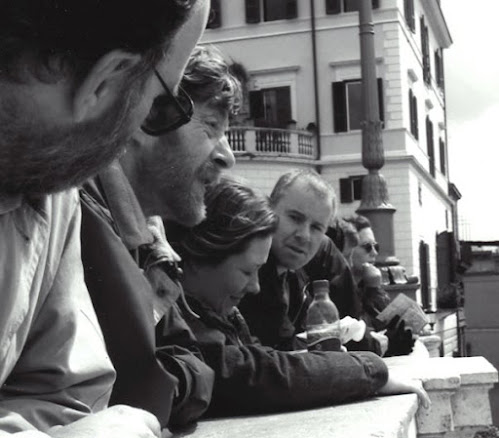 (The good companions: the Northamptonshire crew at the Spanish steps in Rome)

When we were in Oz, Graham entered us as a Society of Ancients team in a category for scratch teams.  With Chris and former editor Steve Neate.  You know what?  We won it!  It was one of a whole cabinet full of trophies that ranged from painting competitions in the 1970s to Bolt Action  wins pairing up with his daughter just a few months ago.

In 1999, he won the Murphy Mania DBM in Delft, and in 2009, the DBA Northern Cup in Sheffield.   Graham won a couple of notable sportsmanship awards, one at Michael Grant’s much missed Anderida event in Pevensey – and, notoriously, at Brticon, where he got so drunk on the Saturday (it was, in truth, one of those great Saturday nights) that he could barely speak on the Sunday morning (but picked up masses of sympathy points as he stoically sat in on his side of the table and gave his opponents a good game).  Not the only time that organiser, JD McNeil, would have altercations in the early hours, only to be presenting the sportsmanship award (the Society of Ancients Persian Helmet, no less) to the, now, everybody’s Mr Nice Guy, on the Sunday afternoon!

But I’ll finish this by mentioning Graham’s most recent award … just a few weeks before the end.  Presented on a live link. As Market Harborough Rugby Club’s top volunteer - for the girl’s Rugby teams.  Tamara’s team.  Being involved, helping out, going the extra mile. That was Graham. 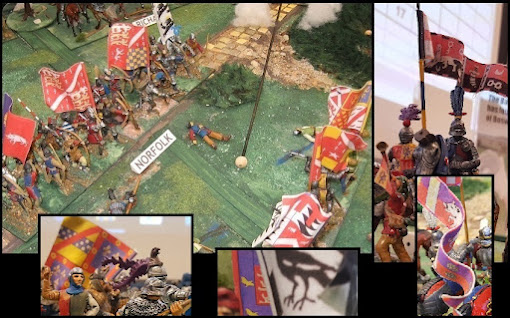 (Fluttering Flags by Graham on my Bosworth 54mm game)

Latterly, Graham solved a problem I had posed over the years – how to print flags on fabric.  He was good at it, and set up Fluttering Flags (becoming something of a heraldry buff into the mix – flagging up the figures for the heritage award winning Northamptonshire Battlefields Society’s battle of Edgcote model, my Bosworth collection and helping on the Northampton posters project) … 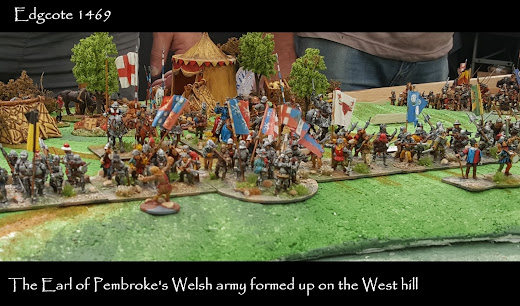 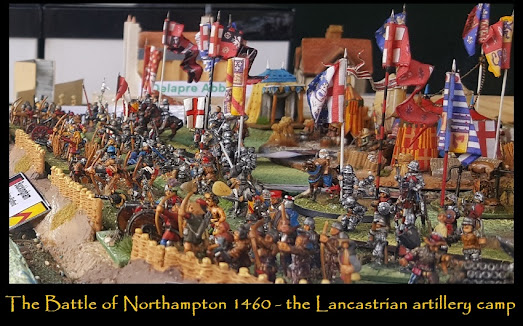 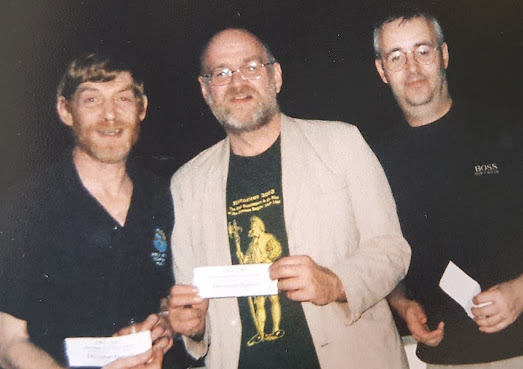 (me Graham and Chris with our vouchers as the winning scratch team in Melbourne)
Graham's first career was with the Royal Navy where, training as a chef, he was volunteered for the Display Team representing the Senior Service at prestigious events in the gymnastic and Field Gun displays and the fearsome mast drops!

(Graham and Alison's wedding was attended my a large gathering of wargamers in medieval costume)
DUNCAN MACFARLANE (1948 - 2021)
I hope it isn't inappropriate to note this here.  While we were fully engaged with Graham last weeks, we had the sad news that our friend Duncan had passed away.  In truth, it seems I had know Duncan longer than anyone in wargaming. 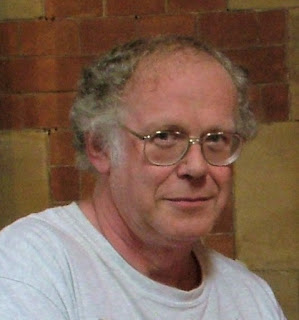 I recall sitting down with him in the Museum Hotel in Delft (Murphy Mania) reminscing and Duncan pointing out to me that it wasn't via Partizan that we first met but ar a Society of Ancients AGM in the 1970s at Caxton Hall (anyone remember those days?) ... I was a precocious teenage member buying my first Hinchliffe figures - and Duncan was helping Peter Gilder on the stand ... and we got chatting (not for the last time of course).
My reminiscence that night in Delft was how, having drifted away from regular wargaming whilst at University, I was browsing in WH Smiths at Euston station when I randomly saw and picked up the first ever issue of Miniature Wargames. It was a gem and completely reminded me what my leisure time was destined for - it was my route back in.  I've not looked back.
I have a lot to thank him for.
Duncan leaves a huge gap in our community but also an enviable legacy - few will ever make as big a difference.
******
Rest in peace my friends.
Posted by SoA Shows North at 11:51 PM No comments: