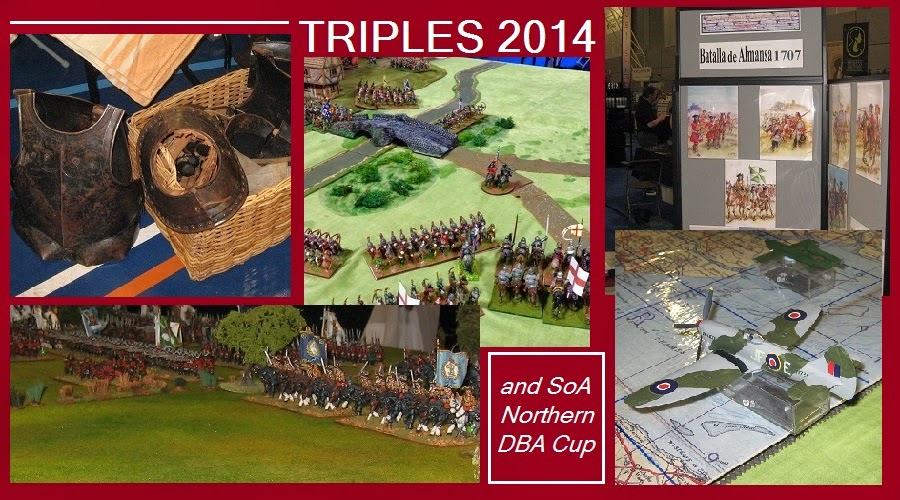 Triples this year was something of a landmark ... as it hosted the 10th annual DBA Northern Cup sponsored by the Society of Ancients.   Just a couple of us Shows North types were available (and only for the Saturday) ... so we went along to play DBA, have a look at the show and then present some prizes on the Society's behalf.

Do volunteer to help - or it may go out of fashion before you get your chance ...

Playing made for a busy schedule so my trip around was relatively brief and mostly involved giving some money to the traders and exchanging brief updates with old friends. 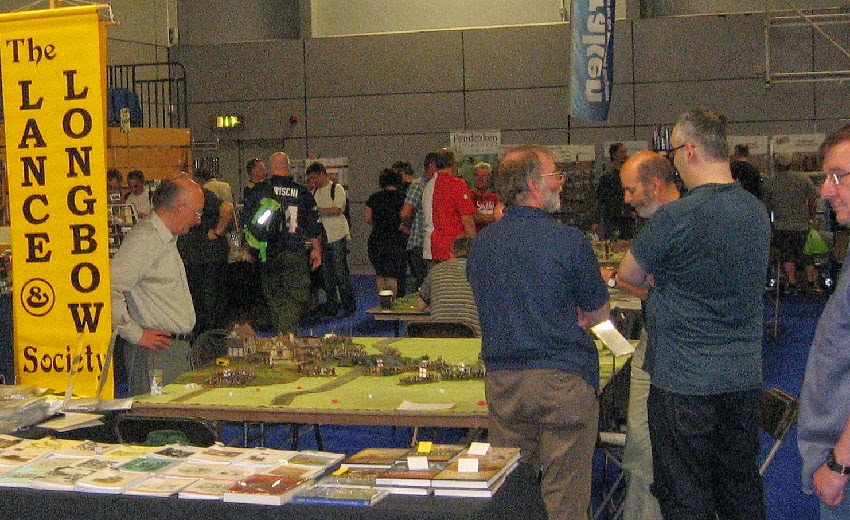 A weaker show for historical societies that rely on volunteers - but nevertheless a great Medieval game from the Lance & Longbow Society ... and some deathly doodlebuggering from WD ...

Have a look at Will's Blog for more on Bauge and some excellent pictures .. 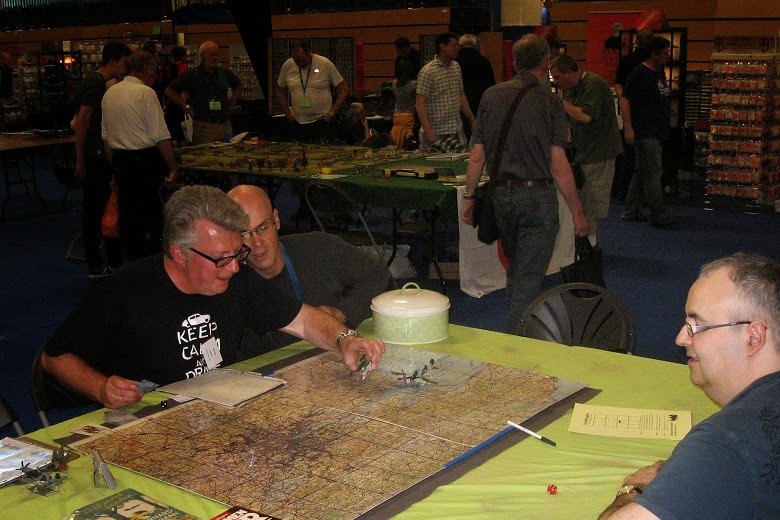 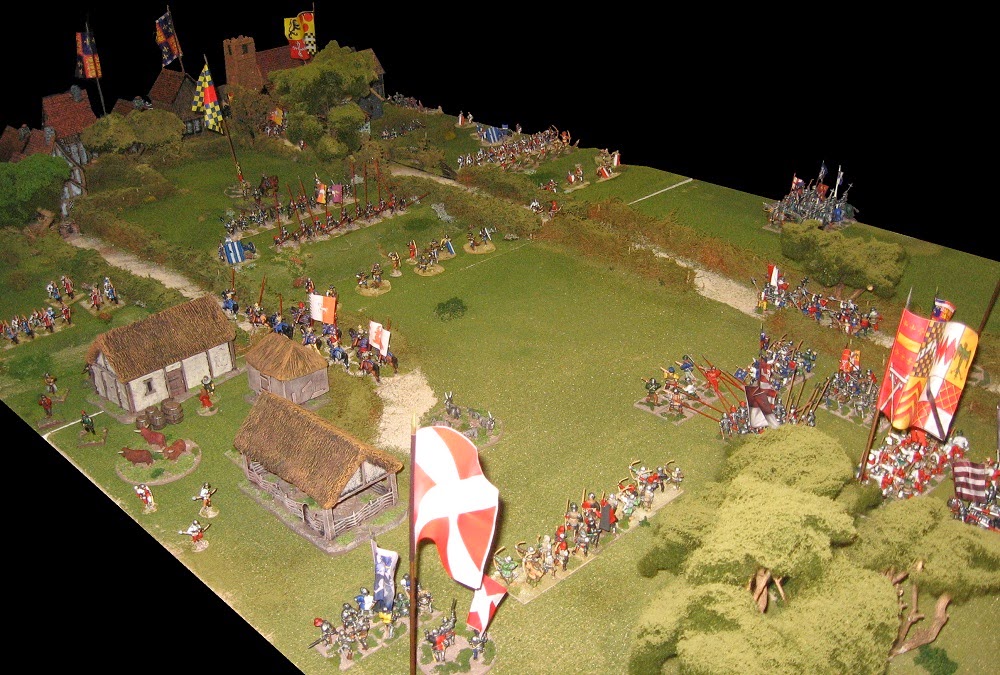 ... and there was a very colourful Wars of the Roses game from Mosborough Old Boys - the First Battle of St Albans - the big flags made it clear who was who and gave that extra height that helps games get noticed. 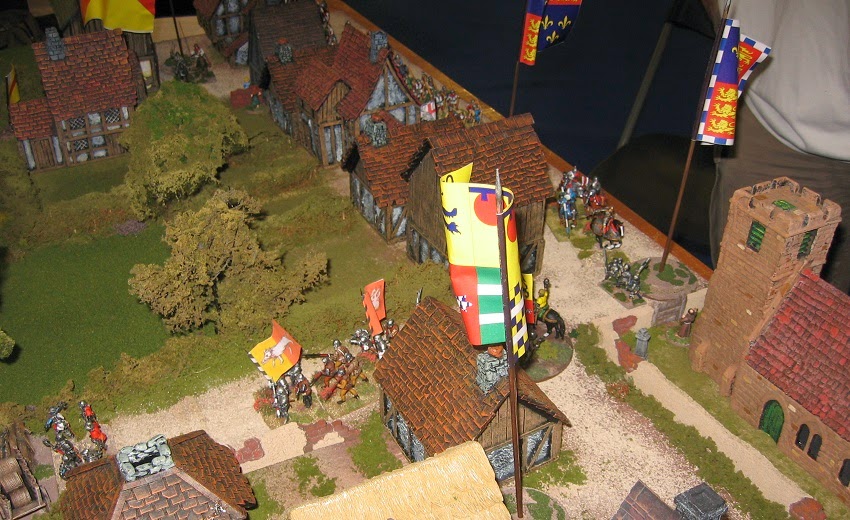 So plenty of good Medieval content, lots of lace and some costume society displays to boot ... only a semi-historical pre-Classical game for pukka ancients of course (and I believe a small commercial pop-up game appeared on Sunday) 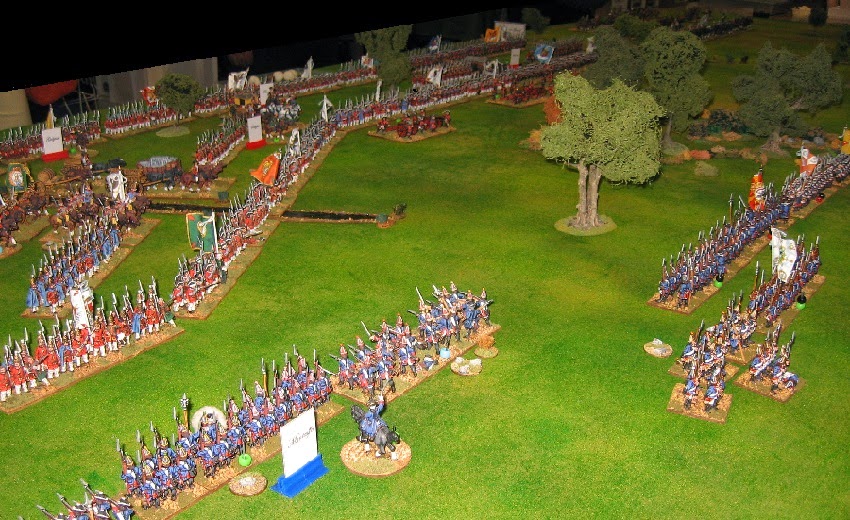 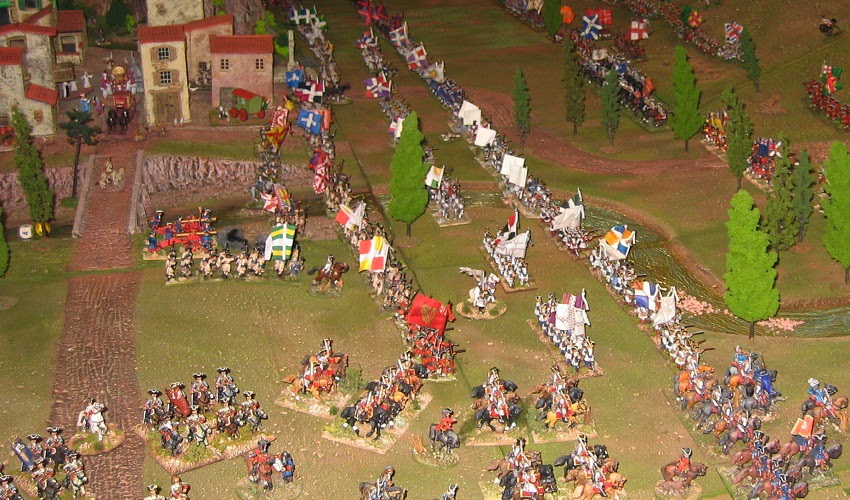 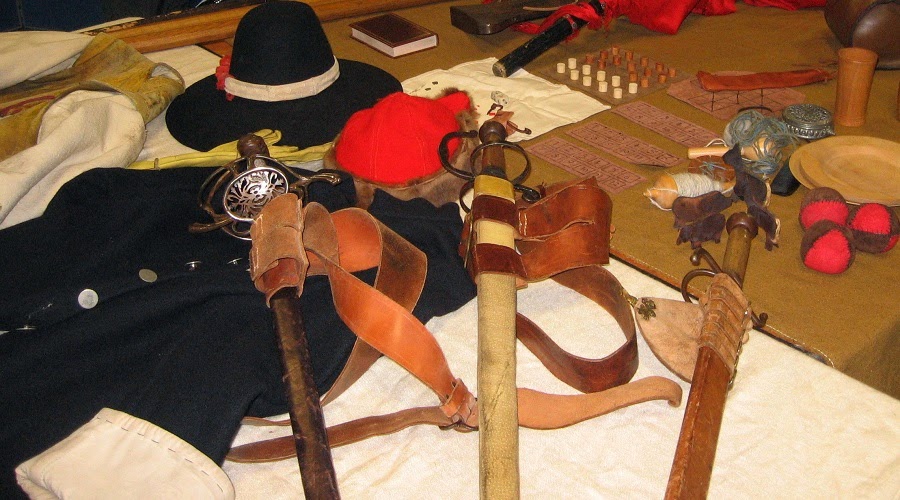 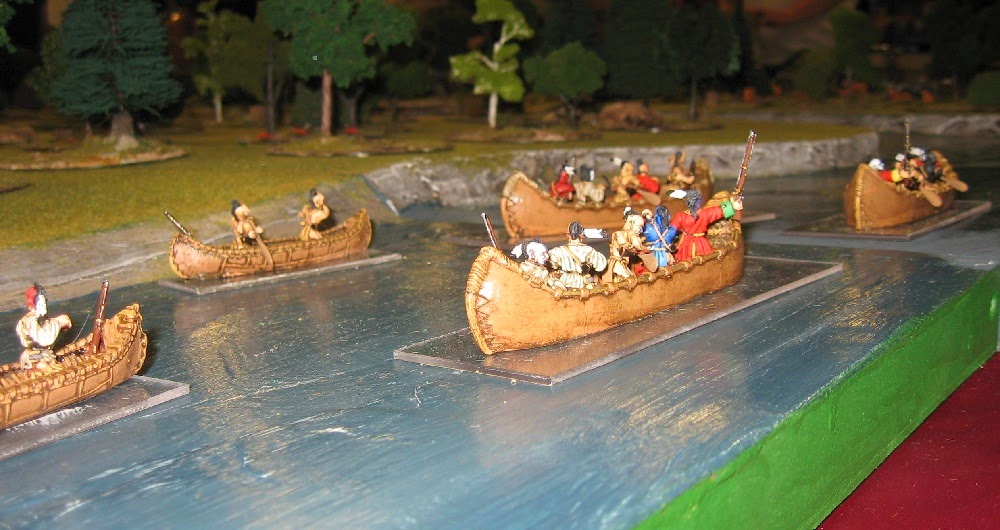 More Lace .. Some things are certain: set up a FIW period game with canoes on a river - and I will photograph it.   I will do a splendid Rogers Rangers game one day ...

For ancients, you needed to go out back where we were staging the 2014 DBA Northern Cup

This was the tenth running so great thanks are due to Lincoln duo Murgatroyd and Morley who put it together every year. 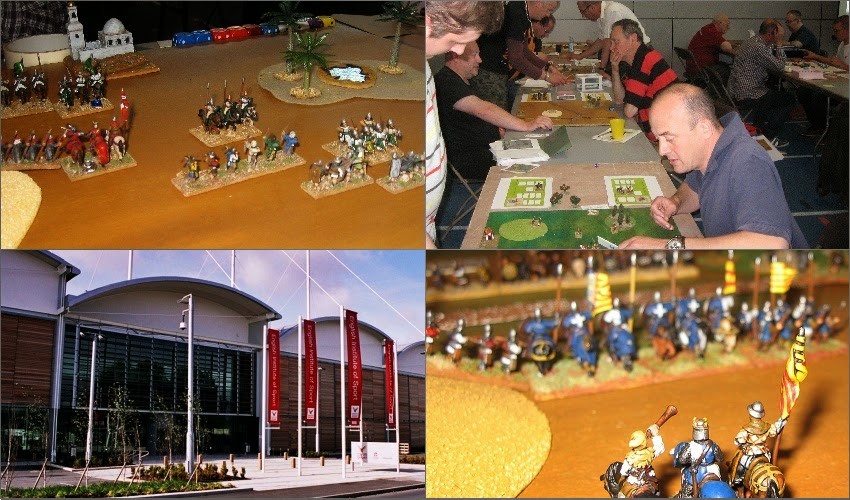 If you aren't familiar with this event, the organisers provide all the armies boards and equipment organised into 8 preset scenarios drawn at random each round.   The terrain, armies and attack/defend are already defined, the players take over with defender camp deployment.

So this means lots of novelty and variety fro the players resulting from lots of work by the organisers. 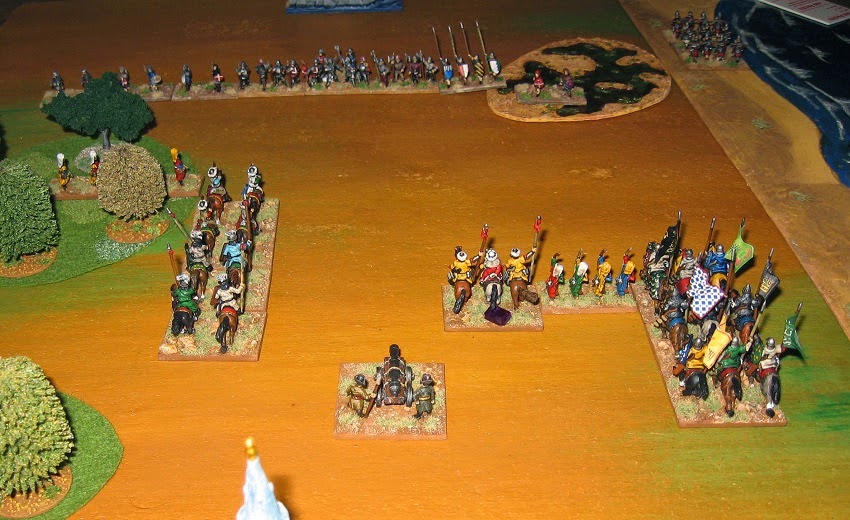 (my Game One: Ottomans take on the Knights of St John) 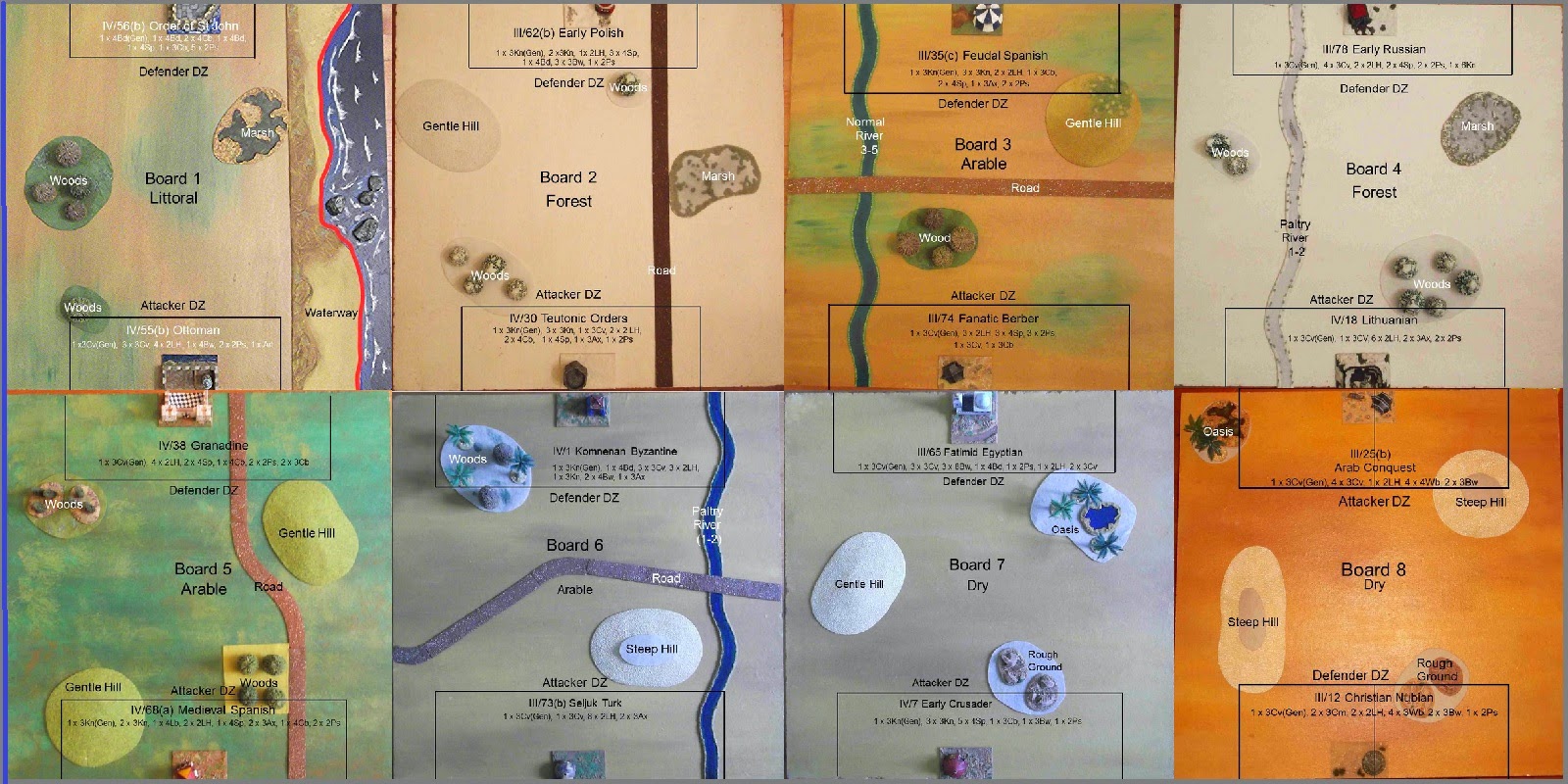 As usual for English DBA rounds, we played 45 minute games within a 1 hour window and scarcely any were drawn.   All mine were concluded decisively.

(Early Crusaders held off by Fatimids)

So, five excellent and good natured games that saw me running in the podium places til Eliseo called time on my lucky streak in the last game.  Good job ... as I was presenting the prizes.

Once again, this unpredictable event produced a new winner (that's 10 in 10)

Congratulations to them and thanks to all the other participants.

And thanks, of course, to SoA for sponsoring, Triples for hosting and Paul and Tony for putting it together. 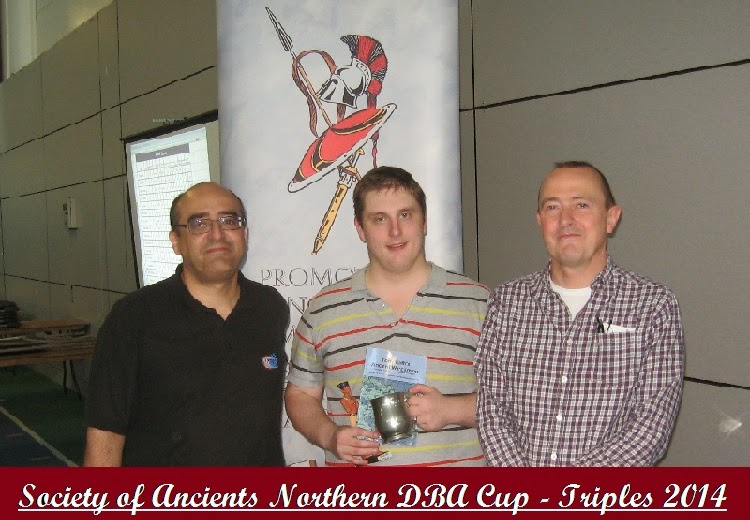 Next outing for Shows North: Partizan
The Northern Cup counts towards the SoA UK DBA League

For more about this and other DBA events, try Fanaticus and the DBA Yahoo group.
Posted by SoA Shows North at 10:51 PM 2 comments: