Vapnartak at York Racecourse marks the beginning of our shows season, and our first recruiting opportunity of the 2011 membership year.

We had an excellent and timely trip up and got some good parking near the loading/unloading access.

This year we were back on the upper deck near the 'flea market' room (formerly 'Bring & Buy', and subject of much debate on other forums ... Vapnartak? A car parking and bring & buy topic, mostly ... well for us our first show of the year, great facillities and nothing much to winge about).

That said, I hope they rotate this 'upper deck' berth: we take participation games, and so benefit from accesss to most of the showgoers, not just the 'second hand' punters and those who seek us out specifically. 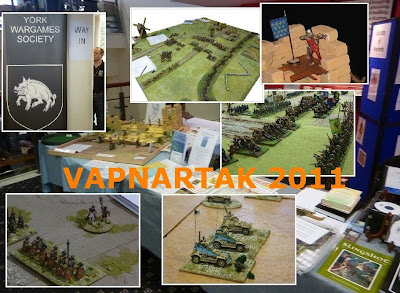 Given the 'wall to wall' 28mm static displays all over the ground floor, surely there is room for a bit more variety and a bit more 'participation'?

I think the 28mm sameness of the display games is the only real criticism of this show (and one I've picked up elsewhere - it isn't just me ...). And it can be easily fixed.

We were doing 'Greyhounds in the Slips', a year on from the project test, which was at Vapnartak last year. It has come some way ... Last year's 'The Hedge at Poitiers' was a public test of the movement and combat concepts designed for GitS, was 54mm and was portable in a smallish box.

It worked, and proved easy to play both for participants and presenters. 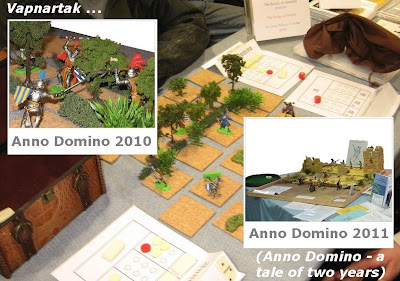 'Greyhounds in the Slips' has 90mm figures, a full layout, custom built masonry, and the integral set of Shakespearean speeches.

'Greyhounds in the Slips', of course, will be published by the Society of Ancients this spring in an Anno Domino games volume along with Graham Evans's 'The Elephant In the Room' (for an update, see Graham's blog) ...

We got a few good games in that busy window (a little short, up top, of course) between when the public reached the upper floor, and the mid afternoon petering out.
After that, there was time to visit the busier ground floor, do some shopping, and browse the 28mm monster tables (of which some were huge, of course ...).. Most of them were static, unmanned, and not very well captioned. 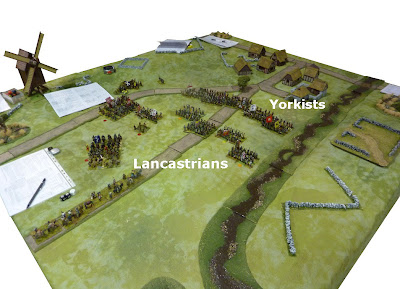 (Mortimer's Cross, as presented by the Lance & Longbow Society)

An exception was the Mortimer's Cross game by the Lance & Longbow Society, nearly bang on the 550th anniversary of the battle (2nd or 3rd Feb 1461).

It was fought using Poleaxed.

Steve Ayers takes up the story ...


' ... We used the troops and terrain as set out in the Poleaxed Source Book vol 1.
In both games the Yorkist line held its position and the Lancastrians advanced (as per the book). In the first game the effects of Yorkist archery and troublesome manoeuvering unsettled the raw levy/peasant Lancastrian left wing which was further dismayed by the appearance of the Yorkist cavalry on its flank.

With their low morale rating and Will's dice rolling, they quickly took to their heels. This allowed the cavalry to sweep on into the exposed flank of the main body, with similar effects. One-nil to the Earl of March. 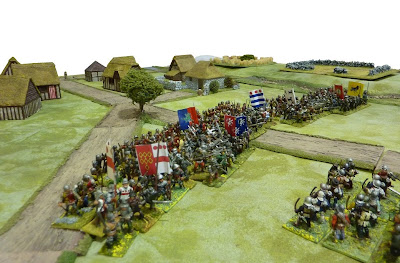 (the Yorkist line, with the Lancastrians approaching)
The second game saw the Lancastrians remain to engage the cavalry (albeit briefly) and helped their cause (temporarily) by getting the horsemen to chase them from the field! The rest of the left wing did manage to charge home but (not surprisingly) got the worst of a mismatched engagement. ...'

Thanks for the narrative, Steve ...

A quick trip round some of the other exhibits.
I can't give a full explanation of most of them: captions and explanations were a bit thin on the ground at Vapnartak - so like most visitors, I haven't much of an idea what half the games were meant to be (check other blogs also ... the public were mostly left in the dark ...).. 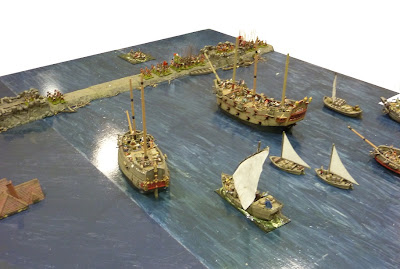 (the naval end of an enormous but largely anonymous static display)

That said, many of the games did look splendid - and in some case, the brush work was good too. 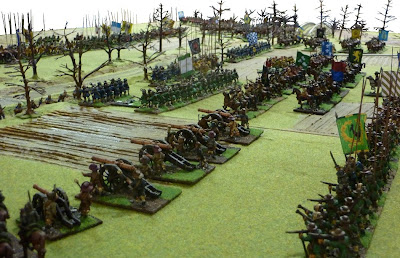 Well, I'm sure the organisers of Vapnartak know what they are doing, and, in general, it is a very good event.

They get a good, friendly atmosphere and are very welcoming.
I do think this year that the 28mm brigade let them down a bit, though. 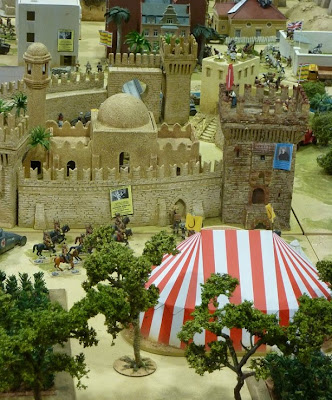 Massive (needlessly massive) games, mostly a bit samey, and never really clear what the game was doing other than showing off large collections of toys, but without the pizzaz that makes that work ... meanwhile, on the upper deck, we had two participation games side-by-side, where only punters looking for a Bring & Buy bargain were likely to find them.

I wonder what the other feedback is like (I only read the 'progressive' blogs, not the gushy 28mm frothing ones, so I don't get an objective view ...)..

We managed to distribute an average number of memberships, but otherwise were a bit down, due to the low traffic location. A bit of a change from, say, SELWG, where, with a central location, a prize-winning GitS had players queueing for a slot for significant periods of the day ...

We will be trying Hammerhead next week ... the C.O.G.S. show at Kelham Hall - with a reputation for Fantasy and Sci-Fi, and a venue known for its sprawling 28s ... I wonder what that will be like ...

Labels: Battle of Mortimer's Cross, Greyhounds in the Slips, Lance and Longbow Society, Society of Ancients, Vapnartak, Wars of the Roses