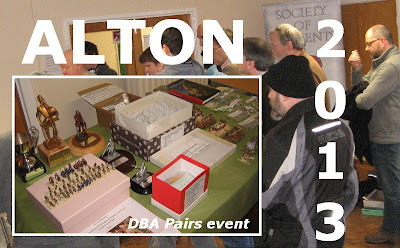 (a round of the 2013 Society of Ancients UK DBA League)

Rule 1: keep calm and carry on: nothing is ever quite a bad as the panic-mongers and sensationalists at the BBC would have you believe (the only reliable source of information in the UK, these days, seems to be your own eyes and ears).

So I braved the driving sleet and snow and ploughed round the M25 to Alton, as did most of the players who had signed up.  The turn out was good.   I'm glad I made the effort - the return trip was painless, and the event was great fun. 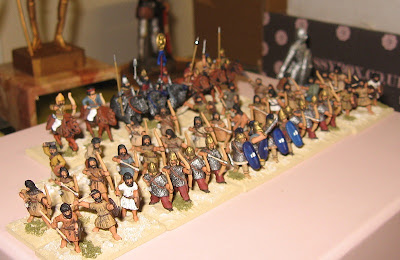 Martin had organised a wealth of prizes to reward the players, including a number of DBA armies and a selection of BUAs and camps.   I think everyone picked up a token of one sort or another.

Star Prize was a very attractive Nabataean army kindly donated by Colin O'Shea and made up of tough looking Donnington Miniatures, new and ready to go to war for the winner (see pic.).

The format is 'matched pairs': each player brings along a pair of armies (preferably historical opponents or similar ...) ... and will use his/her pair every other game.   When using them, the opponent chooses which to go with ... otherwise aggression, terrain, deployment etc. goes as normal.

6 UK-style games against a 45 minute clock, 3 either side of lunch ... Randomly drawn opponents and prize-giving around 4:30.

This format offers just about everything I like ... quick games that are broadly historical ... a balance of variety (half the games are what you chose to offer, half are what other players prefer) ... a random draw ... and generally an absence of uber armies ...

In the end I opted to take along a couple of my Gothic style armies ... based on Stilicho's 405 Fiesole campaign where he used Gothic foederati against Radagaesus.   So Goth against Goth, really, but I employed the Ostrogoth and Gepid lists to give variety to the two armies.

Elsewhere, the was a very enjoyable mix and some well-presented armies. 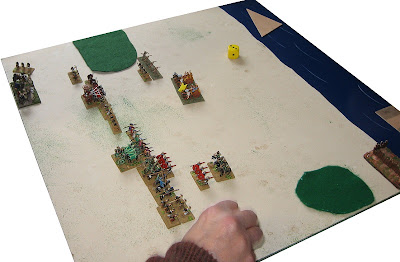 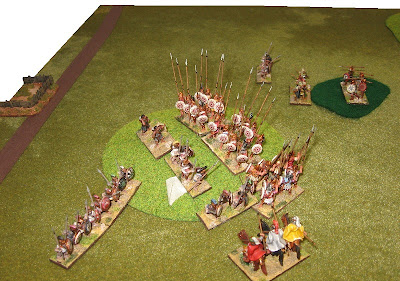 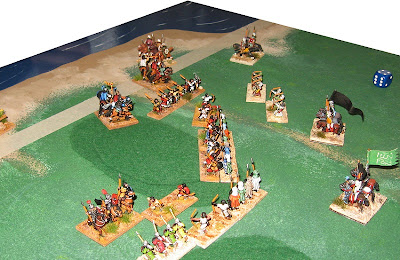 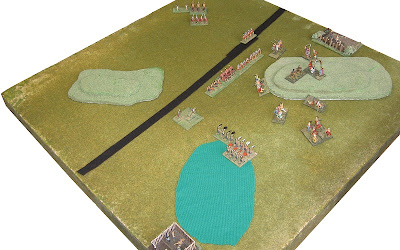 All of my 'away' games were close affairs, I thought (though the score lines varied).   Lots of terrain made fighting off the Dacians a challenge.  I just lost a very dicey game using Blemmye against Colin's Arabs.   And I managed to pinch the points in the Sub Roman war ... Richard pushed his warbandy Brits up a road, I managed to absorb the charges and surround them (and fortuitously called the combats in the right order in what proved to be the last turn) 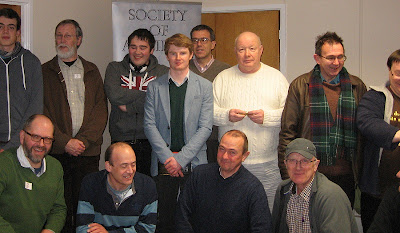 (some of the Alton players: with apologies to those who got chopped off the edges)

Martin kindly asked me to represent the Society of Ancients for the presentations, so as an alternative to lots of handshakes, here's a line up of happy campers ...

A very successful day based on a simple but effective formula.   In addition, thanks to all of the sponsors and individuals who donated prizes.  Much appreciated all round.

These armies derive from an Armati Gothic army, hence the matching look.   I gave the wagon laager camp to the Ostrogoths and made a second one up for the Gepids incorporating the Roman watchtower (a splendid Baggagetrain 10mm item): a much better employment of it than its previous appearances as a BUA (like ... as if I know how best to use a BUA in this game ...) ... 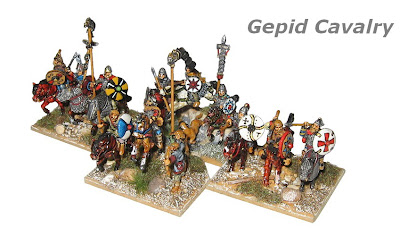 The Ostrogoth, I think is clearly slightly more attractive (it is easier to see how to use the extra Kn and LH than 2 extra Ps, I think: anyway, my opponent took the Ostrogoths in all 3 games ... 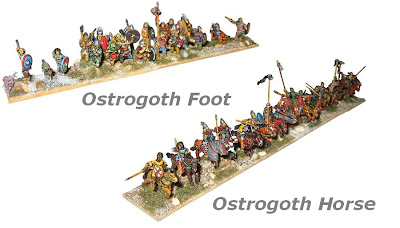 So my game involved using the Ps to tie up the enemy foot, and to use the Warband to tempt the Gothic knights into a position where I could gain the edge: certainly I should be able to tie them up with 4 Ps at my disposal, and certainly, with an advantage in Knights, the enemy will try to get them at my Warband ... 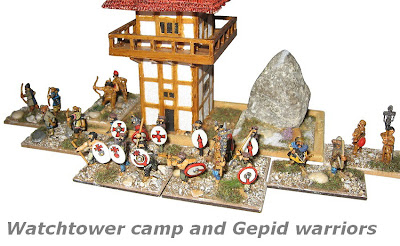 But could I take advantage in those circumstances?   Well it worked for me in 2 of the 3 games.   In the 3rd the enemy indeed took the bait, and allowed me to engage with overlaps ... however, he won all the combats, taking down all the warband, a Knight and the General in one turn! 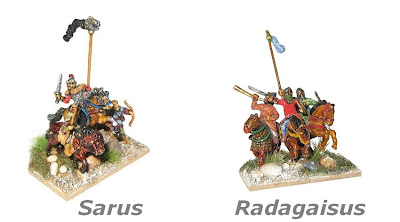 However ... that's 2 successes out of 3.   Last time in this format I lost all 3 of my home games ... so my choice was obviously a touch wiser this time.

I'm also pleased that all 3 (indeed all 6 of my games) were completed inside the distance (which at 45mins doesn't allow for much dithering): Knight and Warband armies against each other are 'result armies'!

I also won 2 of 3 away games - so came an unlikely third ... winning another trophy and picking up a Chariot Miniatures Theban army which will need painting!  Thanks, Magister Militum: lovely stuff!

Riches indeed!  See what I mean?  What more could you ask of a one-day tournament?

BattleDay and Doubles Masters next ....

Thanks for the comments ... re the format, I have to say that when we just play DBA on a 'club' night, it tends to be pairs too - people bring along historical match ups rather than single armies, and play each other's games alternately.

Thanks for the comments ... re the format, I have to say that when we just play DBA on a 'club' night, it tends to be pairs too - people bring along historical match ups rather than single armies, and play each other's games alternately.