Edgcote goes to the Technology School

At the beginning of August I was fortunate enough to be invited to put on the Edgcote game as part of a weekend event at the UK Defence Academy, Shrivenham. 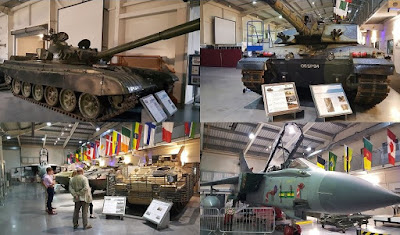 (Heavy Metal at the Defence Academy)

Most of the time was spend trying out Army simulations, looking at tanks and weapons and playing in games based on contemporary challenges ... weapons procurement, stress in the Middle East, rescue missions.

But we also got to do classic piracy in the Med, an Old West gunfight and 2 games of the Wars of the Roses battle. 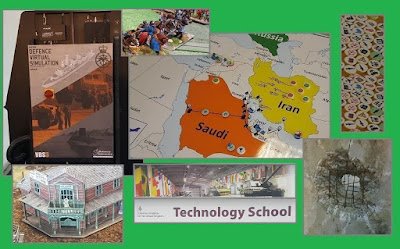 (all kinds of wargame in all sorts of periods) 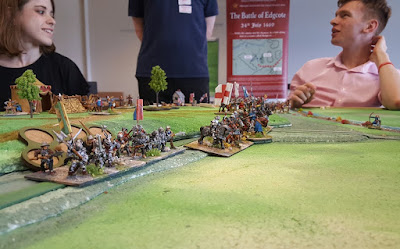 (Edgcote 1469 at the UK Defence Academy)

The two games of Edgcote could ot have been more different.  In the first, both sides' reserves were slow to command (indeed we felt, rather historically, that Humphrey Stafford had clearly chosen not to get involved at all) but Herbert himself still got stuck in - trying a subtle flanking move with his mounted option (and nearly getting the edge before bouncing off) ... 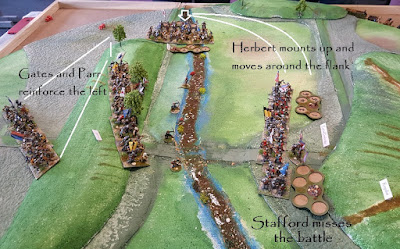 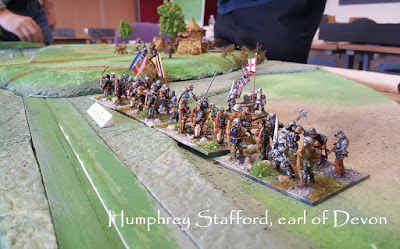 In the second game, Hail Caesar's  command mechanism brought the reserves of both sides up more rapidly, while Herbert mounted a plucky assault on Robin of Redesdale's centre - driving in the archers, punching across the river and causing the rebel centre to withdraw. 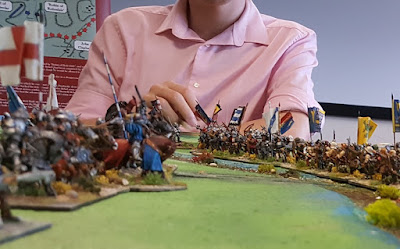 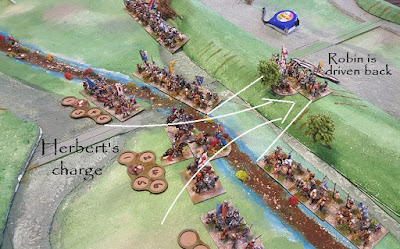 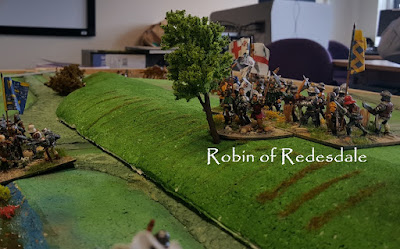 Meanwhile there was a supporting engagement on the flank between Stafford, Gates and Parr, who tried to gain advantage from manoeuvre. 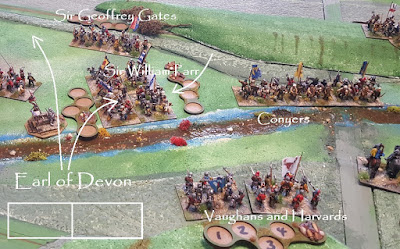 Stafford took the worst of the attrition on the flank while, in the centre, Lord Herbert felt so badly worn down that he declined to exploit his defeat of Redesdale ... rather pulling back to regain some stamina before charging again.

This probably cost the royalists the game as in the lull in fighting, John Clapham arrived with the Vanguard of Warwick's main army (although, as historically, they actually turned out to be the Northampton rabble shoutin 'a Warwick!' and displaying the earl's colours - as well as their own wild rat flag) ... 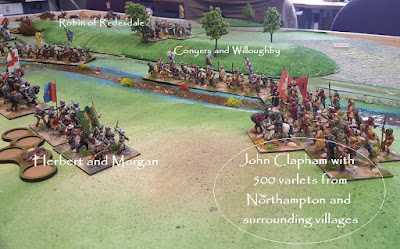 It was a relatively weak force but was in the right place at the right time.  Shooting support from Conyers and Willoughby gave them a sufficient edge to break the otherwise much tougher Morgan clan ... while Robin himself was able to recover his position in the line and gave some telling volleys into Lord Herbert's knights. 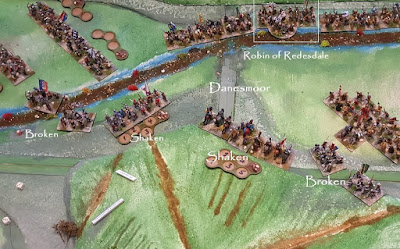 This ended up probably the most comprehensive victory we have seen: Herbert and Stafford's forces were all engaged, and finished broken or shaken right across the field.

Richard Herbert fell in the charge, asked for quarter and was mercilessly killed by the Welsh.  Stafford also fell but was escorted, wounded, back to the camp (where he was subsequently captured and killed - thereby cheating the lynch mob in Bridgwater!) ... William Herbert, earl of Pembroke was killed on the battlefield and Henry Tudor escaped.