Welcome to Jerusalem
The first decision that has been made has been to define 2" as the MU (effectively doubling all the distances). This is because everything in FoG happens (broadly) within 15 MUs - mostly the last 6 or 7 - so a game using a 1" MU is needlessly confined to a narrow band of the playing area.

I made up some additional personality figures ... Here is the governor of Jerusalem, Iftikhar ad-Duala ... He can be a Troop Commander (he will be useful within 4 MUs/8", but can't be everywhere at once). 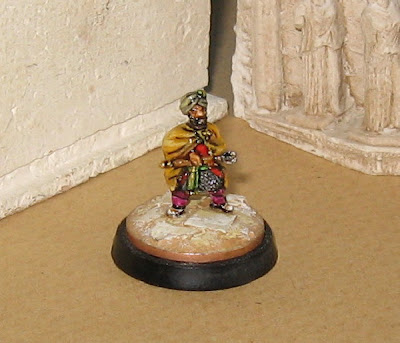 Iftikhar ad-Duala, Fatimid governor of Jerusalem in 1099
(commander of the Turkish garrison)

The general aim, of course, is to get something with a plausible feel and look - but which allows us to use the game mechanisms to play out the historical events. 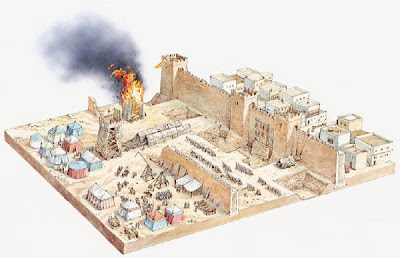 Schematic view of what the siege might have looked like (though only two towers are mentioned in the sources - one from the north and one from the south) ... this is from a series of drawings here ... (Peter Dennis)


Treat the siege engine as a transport or capability marker. Stack the figures, commanders etc. that represent the BG up behind it. Use it for the movement and combat position. A shooting gallery or belfry is a stand's worth of shooting (the tower might have more than one), the draw bridge is a stands worth of combat frontage.

The Tower makes its final move into contact in the impact phase, and fights one stand (against a single enemy stand). If the attackers win the combat, the attackers must make room for the fighting stand to be placed on the rampart, and an expansion from this is allowed in the movement phase (again, the defender must displace figures to permit this): pick stands up from the stack behind the engine, and place them in the developed combat position. 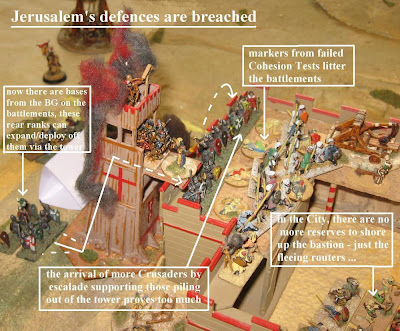 (click on the picture to see a bigger version)

This scene from a game we played at the Derby show illustrates and easy situation (there is plenty of space for the BG to debouch into ..).. The Tower is part of a BG of 6 assault troop stands (5 armoured HWs + some archers in the gallery). The unit has been successful in its impact and melee and has placed a stand in the fortress. Two further stands have expanded from this (and two are left in the stack behind the engine). The enemy have just broken, and the assault troops will measure their pursuit from their current position in the usual way (and the rest of the BG will join in behind them). This is fairly easy to do when the entry is into a bastion or similar (i.e. where there is space to put everyone into frontal contacts)... 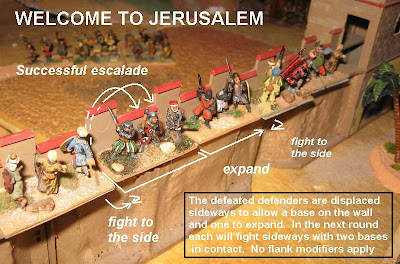 Where wall walks only allow a single stand's depth, it is sensible to use the same system, but count side to side contact as it front to front. Again, if the attacker wins, an expansion must be made room for by the defender (this way, the assault parties can push their way out from a successful attack).

If they assaulters fail to win, they are not established on the wall. The defender can overlap them - they cannot expand or count as more than the single base. If they break, they rout away from engine/equipment at ground level. The defenders can pursue them - but are not obliged to (no test required). Any bases from either side that are not counted as fighters in the melee can be shot at in the usual way.

Equipment - from ladders to siege towers - 'belong' to BGs. They can be parted in two ways. If the assault party is successful, the equipment can be left at the walls and the BG press on. If the enemy make unopposed contact with any such equipment that has no friends on it/in it/defending it, it is lost. Otherwise other BGs can make temporary use of it to enter the fortress etc. (apply some common sense and be prepared to put scenario notes in should there likely be complicated interactions). If the BG assaults but is routed, likewise it loses the equipment (normally, this means the equipment is destroyed, but scenario notes are useful ..).. 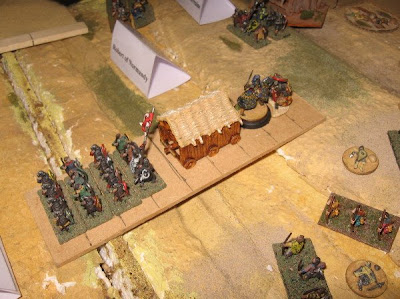 Here a BG approaches the walls with a Cat or Shed .. The whole BG .. 4 stands, the Cat and an attached commander have been placed on a movement tray. It helps the player treat it as an entity (and makes movement easy!) .. it is a BG, formed for an assault. It counts as 4 stands, it has a singles frontage ... it has a Cat with a ram and there is a commander present.
Posted by SoA Shows North at 4:20 PM