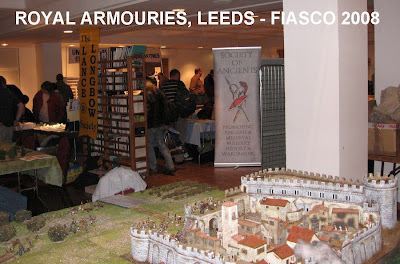 The second part of this busy weekend was a trip up to Leeds for the ever popular Fiasco at the Royal Armouries. In the preceding days it had become clear that the organisers had not got my penultimate email and although we could be fitted in, there was no space booked or available for our game. Disappointed, we buddied up with the Lance and Longbow Society (/DL Books) .. a sort of return compliment to Partizan (where SoA and LandLSoc buddy up and we do the game ...)... 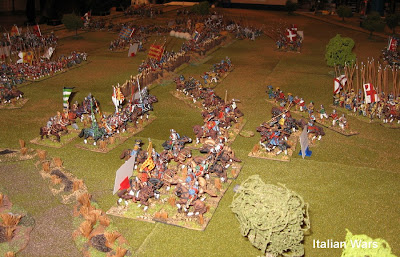 Nice show. Great venue, of course ... and quite a variety of games on display - different ones to the southern shows circuit too. Most were the rather predictable '28mm statics' of course, although the Pudsey organiser was there with a participation game taster for the HOTT competition they run at the other Leeds show in December. The '28mm statics', of course, often look stupendous but it can be hard to see if they would make good games because there insufficient (if any, sometimes) game turns played by which to judge. 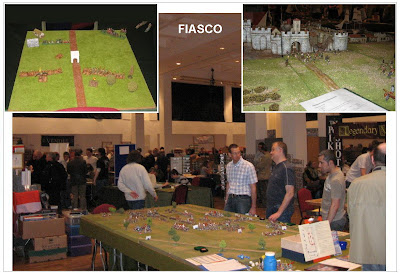 Mind you, don't be misled by my photos - the show was very busy in the morning, and it wasn't until the characteristic early afternoon 'wind down' (often surprisingly early at these northern shows) that I was able to get round, pick up a few bits from the traders and take some pictures. 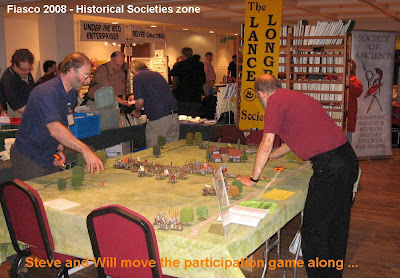 Thanks to everyone at Fiasco (and thanks for helping us get the kit in and out so efficiently).

If you didn't make it this year, come along and see us at the armouries next year (maybe even volunteer to help put on a game ...). Next SoA outing for this venue should be a round of the Doubles Masters in July - then, emails all being delivered, we hope to be back for the last weekend in October.
Posted by SoA Shows North at 4:23 PM