Anderida 2008 - 15mm Doubles for the Society of Ancients Trophy 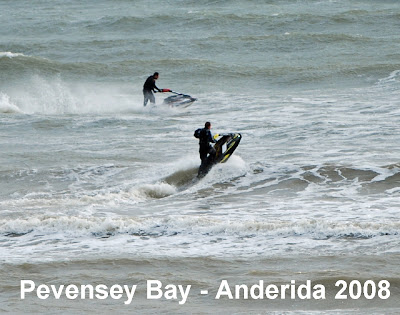 (thanks to Chris for this fantastic shot - honest, this is from the Aqua Club window on the Sunday morning where we were playing the games ...)

Yes, that's a pretty fantastic shot of the sportier types in the surf outside the Pevensey Bay Aqua Club - and well past the best weather on England's channel beaches. That said, it is England, and we'll go down to the beach in any weather. The late night skinny dippers on Eastbourne Promenade could testify to that. But that, as they say, is another story ...

It's a long time since Michael Grant came up with the idea of a friendly late year tournament down on the coast - and the idea that the main prize, the Society's Anderida Trophy, should go to the player that best summed up the event's spirit rather than to the team that amassed the most points. An old-fashioned idea, but one which over the years seems to have kept Anderida an enthusiasts tournament rather than attracted the usual pot-hunters. 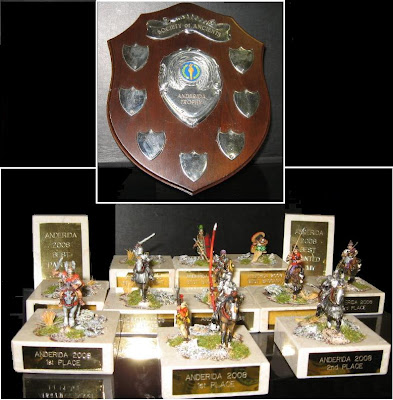 (one of the best collections of trophies you will find)

The welcome and the organisation is old fashioned too - and much the better for it. Perhaps I shouldn't have put in the picture of the trophies, though (maybe they are better a 'best kept secret' amongst the Anderida regulars). From the beginning, Anderida has been a restricted lists event, with a new idea each year. The Best Army and Best Baggage awards are well respected, and many of the teams work for much of the preceding year on the new army for the new theme. It is a pleasure often to be asked as a representative of the Society of Ancients, to scout around and see who's come up with contenders. The final decisions are often very difficult. 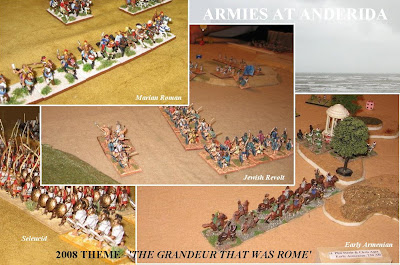 (Anderida - my collage with some of the armies in use this year)
As for the games, for many of us, they are as much a chance to catch up with old friends as to play toy soldiers (and Pevensey Bay's traditionally English breakfasts generally mean a fairly leisurely approach to the day's work is embraced by all ...).

This was very much a DBM swansong for me and my SoA Doubles partner, former Treasurer Chris Ager: we have long since both switched and now play Field of Glory for tournaments.

We kind of got dumped on our derrieres in the opening game (against eventual winners Pearce and Morgan) mostly as a result of me deploying as defender in a position where I would be overexposed if the command opposite got a 5 or a 6 on the opening turn. Bit rusty, then ... Fool's Mate for one of our commands - though Darrell and Jeremy administered the blows with their usual offbeat charm. The results, of course, brightened up ... though we could hardly do much to winkle the Romans out of their fortifications in the final game ... 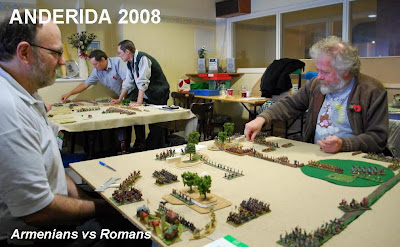 (Phil and Mike's crowded side of the table)

We had chosen Early Armenians for this last DBM tournament - partly because it didn't require too much changing in our busy army boxes (and brains!) from the recent Field of Glory Palmyrans, partly because cavalry armies seem to give a more satisfying game than the dour footsloggers that became such a constant feature after the 3.1 version was adopted ... but mostly because I wanted to curry favour with the gods by circling an eagle over our camp. And I like cataphracts (and I don't like Romans ...)... 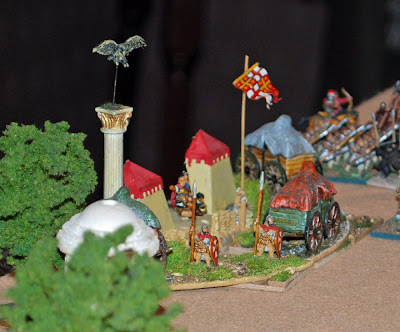 (An Armenian Snake Eagle soars auspiciously over the camp)

Clever little camp vignette - clearly stolen in some time travelling raid on Byzantium, if the flag is anything to go by ... Not the best, though - that went to Barry Harman's assemblage of Hunnic wagons (in contention also must have been the Davies/Parker Roman Marching Camp ... the army itself got the main painting prize ... check out their pictures on the Anderida link ...)..

More important, what a good time we had. Great games all. In the end, Chris and I managed to break into the top ten .. level with organiser/hosts Eric and Alan (who seem to spend half their time these days doing Lost Battles displays for the Society at shows as part of Phil Sabin's team ...).. The Society was able to fly the flag (and productively reminded quite a few people to update the subscriptions). And we all did our bit to keep Michael's cherished values going for another year. And yes, we enjoyed playing DBM over the weekend. It made a change.

You can look up the full results on the Anderida website (here ...), but for the tournament positions, Jeremy Morgan and Darrell Pearce came first with their Sassanids, followed by Colin Sharpe and Mike Bennett (second), and Graham Willmot and Paul Stovell (third). Paul Fencott won the Society of Ancients Shield to universal acclaim for his spirited disregard for personal safety (losing six generals over the course of the weekend, including one in every game ...)

I understand next year will see a choice of either FoG or DBM. Never been before? maybe 2009 will be the year ... Meanwhile here's another of those Pevensey views to sign off with. 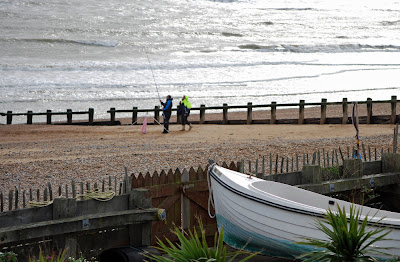 (Another of Chris Ager's holiday photos)
Posted by SoA Shows North at 2:13 AM