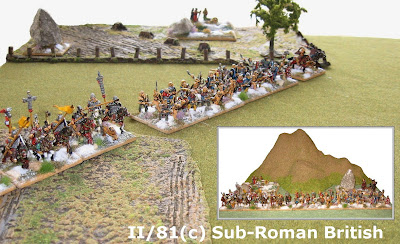 
This is one of those armies everyone thinks about from time to time.
I am very lucky ... when my friend Paul emigrated to Canada, he left me his wargames junk. I sold off the coherent stuff to add into Society Prizes etc. I was left with a Dark Age jumble that said 'King Arthur' to me. In a 'Clive Owen' sort of voice ....The packets of figures had remained unopened for at least a decade.

So this is a classic 'army out of scrap' project. I think it turned out well.

The main figure range is the old Josef Ochmann sculpted 'Metal Magic' Gothic range (now Gladiator Miniatures, sold by Black Hat*). Arthur is an Essex Late Roman on a Chariot horse (what I had), and there is a pack of Peter Pig Germans, a Chariot Cornicen plus a couple of spare Outpost figures.

The Roman standards are chopped off Chariot signifers. Again, 'what I'd got lying around' ...

I took the big gamble of drifting some snow around on the bases (to hint at that 'North of the Wall' nonsense in the Clive Owen film) ... I was a little daunted by this as it seems to me you do a good basing job, then plaster some more PVA on it and add fluff. I was worried that the result might just be a mess. However, I think it is OK. I didn't want to go a for the full 'white out' as I suspect the army will as often as not fight on a normally coloured board ...

There are a few patches of heather to add to the Scottish theme. 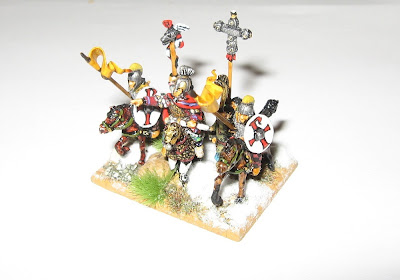 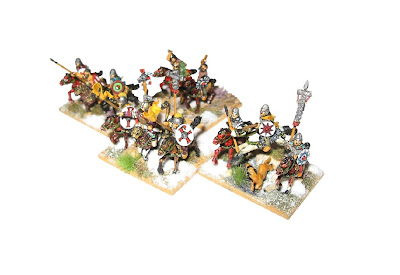 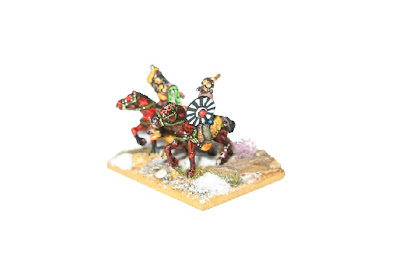 Scouts: 2LH (the left figure has a Peter Pig body grafted on a Gladiator mounted model) 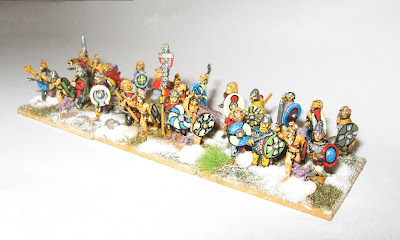 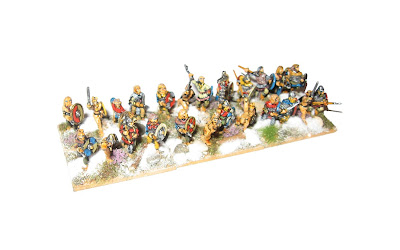 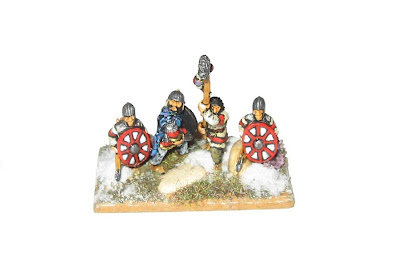 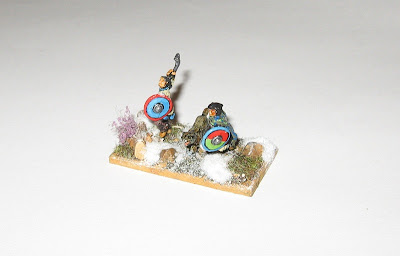 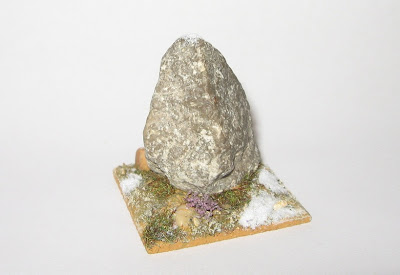 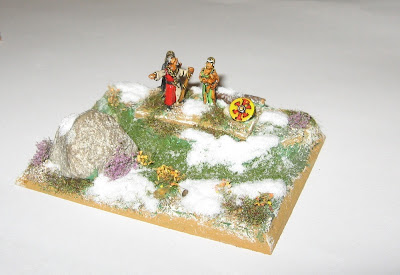 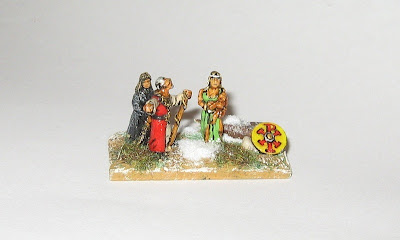 Camp Followers: Nicol Williamson (from the better Arthurian film) with Guinevere and what would seem to be a witch ... A Chariot magician and a Xyston classical lady ...


Snow: nothing was bought for this army ... a friend had a tub of GW 'snow' which looked a bit bland until I added a sprinkling of glitter. After a few experiments, we though it bulked up better if applied to unthinned PVA. The heather is railway shop heather left over from doing my Florentines (it's a viola thing mostly wargamers will not get ...)

The army won all three of its first games, so I have stopped counting.

*NB Ochmann only sculpted some of the Gladiator ranges (before Black Hat acquired them): if you share my aesthetic, you won't like the other ones, so don't assume they all match. E.g. the FE range is Ochmann, the Crusades not.
Posted by SoA Shows North at 2:45 PM

That´s a lovely looking army and the basing is top!!!!
Cheers
paul

I'm a regular visitor to the 'Bods' blog, so I know how much care you take, yourself.